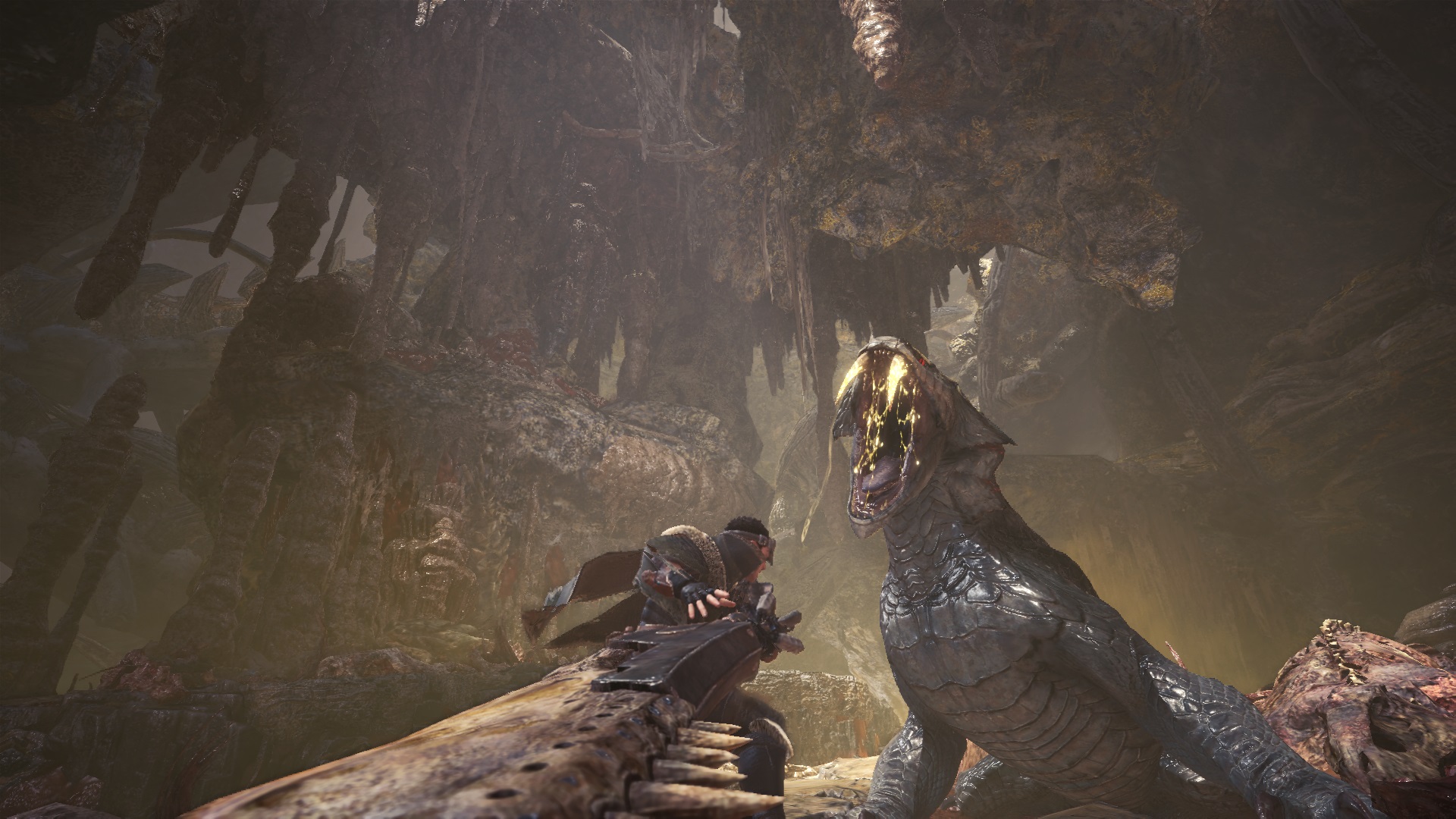 I have played Monster Hunter games before. I feel weird calling myself a newbie when the reality is far grimmer;

I have played four different Monster Hunters across four consoles, going so far as to buy a Monster Hunter 3DS XL just so I could put the hard yards in and finally ‘git gud’.

Ever beyond the veil, just out of reach – something wasn’t clicking. I poured over wikis and manuals but though they were written in English, I still didn’t understand what I was reading. Here I am now, however, 15+ hours into Monster Hunter World and the ‘World’ really is my oyster.

Starting the game, I was almost immediately dropped into the process of meticulously creating the character that would serve as my digital presence in a world fraught with danger; alongside my feline companion (a Palico that would serve as my companion and combat buddy). Though I put a lot of effort into making my hunter look ‘cool’ (in my opinion), I spent far longer pouring over the different ways I could customise my kitty friend (I am a cat person after all).

What followed was an explosive introduction to the narrative, mere seconds after meeting the enthusiastic ‘Handler’ who would serve as my advisor. The ship we were travelling on suddenly found itself stranded on what appeared to be a massive volcano. A frenetic tutorial on movement mechanics leads me to a great realisation – that the volcano itself was, in fact, a colossal monster.

And so I was taught my place in this world. A tiny thing, with a fierce amount of determination.

A few more cutscenes introduced me to the world at ground level, and before I knew it I was tasked with killing my first monster. This was my chance to choose the weapon that would suit a playstyle that I was not yet aware of – my monster hunting history was generally quite pathetic. I decided to go with something that would allow me room to correct mistakes, and so I picked up the Insect Glaive – a type of bladed staff that allowed me some fun movement mechanics to try and avoid getting crushed, killed or maimed.

I was thrilled to find that the controls were all incredibly intuitive by design, with standard guesswork revealing that muscle memory for basic actions (Aiming is on left trigger, with right trigger firing) was all present and accounted for. My PS4 controller served as a conduit between me and my hunter, and we rarely disagreed.

My first few hunts would probably have made veteran hunters hang their head in shame. A massive iguana-looking dude, known as Great Jargras, took me on a massive tour of the ancient forest he called home – not as a friendly service on his part, genuinely because as I tried to kill him, he would easily evade me and run away. A solid 40 minutes or so went into slaying him, with me learning a great many basic-level things courtesy of my chipper Handler friend broadcasting to me as an on-screen tutorial. I learnt quickly that in order to maintain a decent amount of damage, I would need to sharpen my weapon reasonably often, to sharpen my weapon, I would need a few moment’s peace… perhaps hiding in this bush to evade the monster would be beneficial?

As I achieved these kinds of gameplay interactions between mechanic and player, I felt my confidence soar. I was learning the kind of stuff that had eluded me in the past – and it is to Capcom’s’ credit that the game manages to lower its bar of accessibility enough to help a player at such a dubious skill level such as my own.

I eventually worked up the confidence to head out on an expedition, a time-limit free experience where I could take my time to actually explore the maps in full. These meticulously crafted environments are colossal, and I was thankful for the presence of the scout flies.

Scout flies are represented by a cloud of green, glowing insects – directing you to anything interesting within the game’s world as a form of a guide (imagine Microsofts Word’s Clippy, only actually useful). You can influence the flies based on your actions – for example, taking the time to examine monster tracks would prompt the flies to start to direct me to where the monster was currently residing until I could pinpoint it precisely.

The scout flies are essential once you come into realising the scope of the environments, as they start to point out paths and navigation that you may have completely missed. Tracking one particular crafty bugger lead me to realise that there was an entirely vertical area of the forest I had never seen – even after wandering and exploring for literally hours.

Once I had a few kills under my belt, I prepared to face my white whale within the Monster Hunter series – crafting. Previous instalments had made my head spin with the sheer breadth of what was possible, alongside the commitment that the game would ask of you. What I found was a system that offered a range of different options to allow the player to tailor what they are looking for, and compare it to what they had. Even a lot of ‘nice to have’ features, such as wishlisting, were already present, and I could feel myself grasping what the developers hoped a new player would.

What I didn’t immediately grasp did not irk me as it had previously, as I felt the game would likely shed light on it at a time when it became critical – and sure enough, right as I found myself wanting to Google what ‘Armor Spheres’ are for, I was instructed to use them to upgrade my current gear.

At this point, I felt ready to try out the multiplayer component of the game. I had played with others during the Beta, but alongside them, I really did feel like I was along for the ride. Experienced players, effectively taking me on a tour of what to expect when the game is played ‘properly’. Within the game proper, I could create a session – tag it with descriptors as to what I was looking for (‘Beginners Welcome!’), and wait. What I found was people joining my session – if only to simply to help me (it was good to see some veteran players first-hand). They were not in any way forced to do content dictated by me, they could instead choose their own missions – but they communicated they were more than happy to help out.

So I took the opportunity to take on some tougher fights – Anjanath the fuzzy T-Rex for one – and the resulting hunt felt every bit as though I was a contributing force. Mounting the monster to slash along its back, dropping traps and poisoning the monster all while my companion prepared massive swings and slashes of his massive bone sword to deal huge damage.

I also discovered the S.O.S flare functionality, when I met a grisly end on a solo hunt. The game mentioned that if I was in a rough spot, I could actually choose to flag my session as a ‘NEED HELP’ option. For people who were in the mood to help, they too could choose to flag their matchmaking as ‘Seek S.O.S Flares’ and it would work to drop them into games where people needed them. It was a brilliant feature that I could see myself making use of when I had progressed to a point of competency – and it was an amazing example of how Capcom had addressed the game’s accessibility.

As the story ramped up, and I found myself at the doorstep of my first proper test, I looked back at what I had accomplished, and I was thrilled. I may have had a small advantage having struggled with Monster Hunter titles in the past, but Monster Hunter World has addressed every gripe I had managed to develop during that time. The game is massive, but it is not to its detriment – plenty of very smart developer decisions have made sure that the game can retain the immense depth that has come to define the series, without receiving a horrible label of ‘CASUALIFICATION’

I may have played Monster Hunter for only a handful of hours, but I can see myself ready to play it for hundreds more.

Monster Hunter World will release worldwide on January 26th, for PS4 and Xbox One, with a PC version coming later this year.