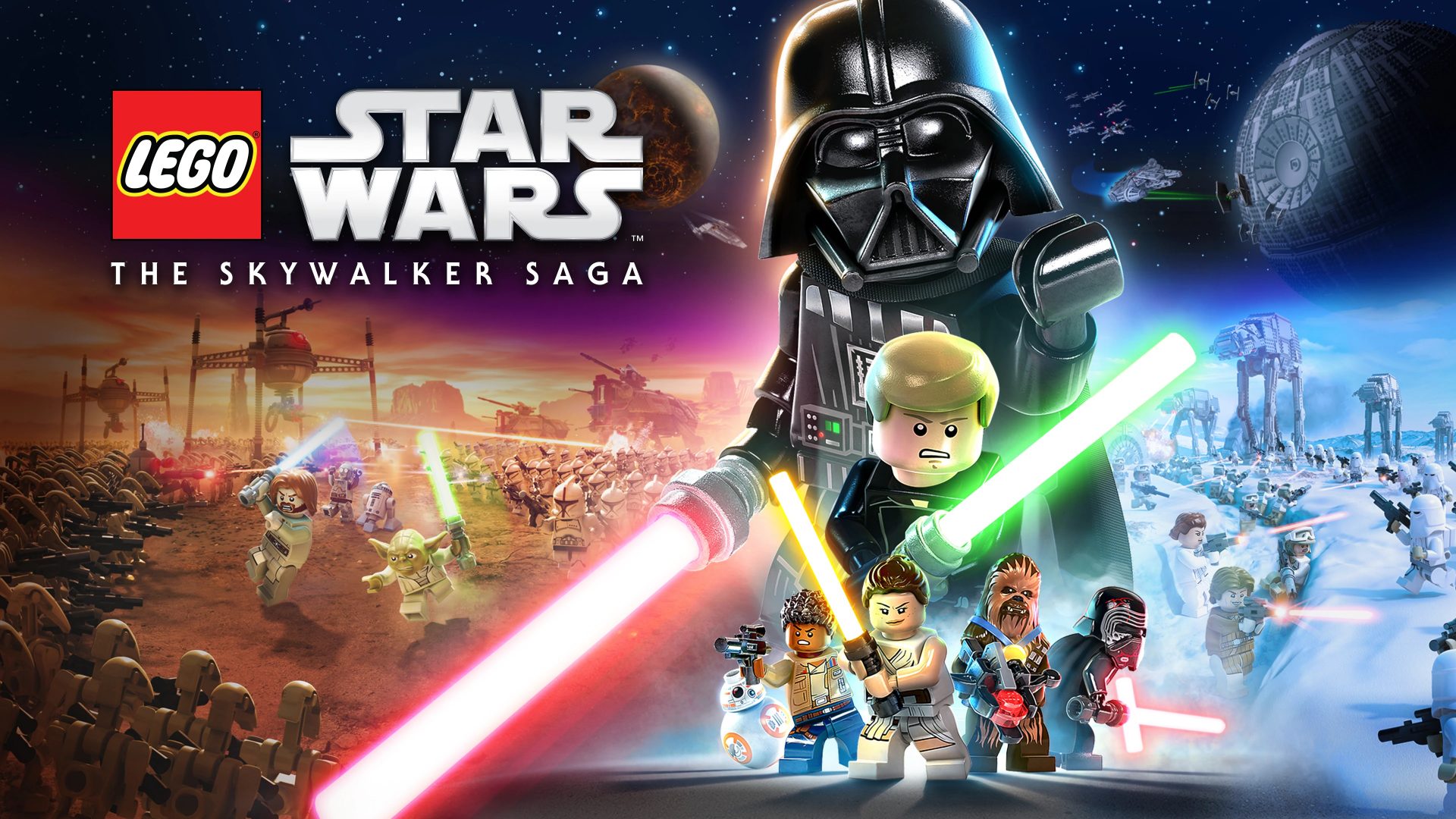 I was eight when LEGO Star Wars: The Video Game was released. I remember being absolutely enamoured with the colourful, blocky retelling of the prequel trilogy that I loved so much (yes, even The Phantom Menace), with the goofy humour and simple action being perfectly suited to someone my age. A full 17 years have passed and I’ve played many a LEGO game since, but TT Game’s most recent release has me feeling like that eight-year-old kid again. Retelling each of the nine mainline Star Wars films in a new and modernised fashion, LEGO Star Wars: The Skywalker Saga reinvigorates the LEGO game formula with new features and mechanics, while also managing to be a brilliant Star Wars game that fans new and old will enjoy.

Those who have played LEGO games in the past will be familiar with the distant perspective and simple gameplay that the series is known for. This generally made each game feel very similar, whether it be set in the Harry Potter, Pirates of the Caribbean or Indiana Jones universe, though not to say that these games weren’t entertaining in their own right. The Skywalker Saga breaks down most of the series conventions, grabs its bucket of licenced building blocks and rebuilds it to be far more engaging and detailed.

I’m a Master Builder, like my father before me

The once distant perspective has been swapped out for a tighter, third-person camera that brings you closer not only to the action but to the more detailed world. The combat has also seen a major overhaul, whether you’re playing as a lightsaber-wielding force user or a scruffy-looking smuggler with a blaster. Melee characters have access to combos that, while fairly basic, mix up encounters and add a layer of depth to gameplay unseen in previous LEGO games. You can launch bricky baddies into the air for a juggling combo, slam into the ground to cause some knockback or launch your foes into a wall with a good old force push if that takes your fancy.

Characters who think that hokey religions and ancient weapons are no match for a good blaster have also been shown some love. The third-person perspective drastically improves gunplay, allowing you to accurately take aim at enemies rather than rely on lock-on mechanics. Brick-built, waist-high walls are scattered around each world a la Gears of War, acting as cover for blaster-based characters. You can easily take cover and pop over the top to blast away at your foes, though their accuracy (whether a Stormtrooper or otherwise) means that doing so is far from necessary. I appreciate the inclusion of cover in an attempt to inject some strategy into fights, but it’s ultimately a bit redundant. The fact that the cover can be destroyed and rebuilt is a nice touch though.

As you play through each of the films, you’ll gain access to each of the ten playable classes (Jedi, Hero, Scavenger, Scoundrel, Bounty Hunter, Villain, Dark Side, Astromech Droid, Protocol Droid and Extra), each with their own abilities. Though some are more prominent and useful than others, each class has a purpose, whether it be in-mission or when scouring the more open environments for collectables. Jedi and Dark Side characters can use the force, Astromechs can access terminals, scoundrels use their wit to blast their way out of trouble and so on. You’ll be swapping between these classes frequently, or working with your co-op partner throughout the campaign, as each mission and area ensures that various classes are called upon.

Let’s be real, I don’t need to caption this

Throughout the campaign, you’ll find hidden Kyber Bricks that can be used, in conjunction with studs, to purchase upgrades for your characters’ abilities. Each character class has its own skill tree that gradually strengthens its abilities, such as the power with which you force push enemies. Tracking down the Kyber Bricks is entertaining, as they’re almost always locked behind a puzzle, but I found myself all but ignoring the almost pointless skill trees. Similar to the cover system, upgrading your abilities just isn’t necessary for a game with such a low difficulty. It would be different if the unlockable skills added a fun new way to interact with the game, but outside of the handy general abilities that make collecting studs and mini kits easier, they just don’t add a great deal to the experience.

Co-op has always been a central aspect of the LEGO games and it’s always been more fun to romp through the stud-filled worlds with a friend. The same can be said for The Skywalker Saga, as its huge roster of 380 gives you and your couch companion plenty of options to choose from when exploring and collecting. I will say, however, that the game’s adherence to the films can make co-op feel one-sided at times. During the climactic battle between Anakin and Obi-Wan in Revenge of the Sith, for instance, one player takes control of the heart-broken Jedi tasked with felling his friend, and the other is saddled with R2-D2 and C3-PO as they use some terminals to move platforms. Obviously, you can swap characters with the press of a button, but the level of fun you’ll have as player two will depend entirely on your friend’s generosity.

The scope of The Skywalker Saga is massive, Bantha-sized even. Each of the nine films features a multitude of missions set across numerous planets, each with its own hub areas that allow you to freely explore and, no doubt, smash everything in sight in the pursuit of studs (which serves as in-game currency). Missions offer a good amount of variety, ranging from underwater vehicle segments where there’s always a bigger fish, shootouts with Stormtroopers outside bars filled with scum and villainy and cinematic boss fights against a troop of crimson-armoured Praetorian Guards. There’s an odd section here and there that has you following an NPC from point A to point B that slows the pace down, but otherwise, you’re taken from one exciting set piece to the next.

The Praetorian Guards make for an exciting boss fight, especially when played in co-op

There’s plenty to do outside of the main objective as well. Yes, there are Kyber Bricks littered throughout every hub area, but there are also NPCs that offer side missions. Easily missed, some of these quest givers open up opportunities to take part in fun moments filled with a healthy dose of fan service. One mission (given by the one and only Jedi Master Yaddle) has you track down and fight a mighty Krait Dragon. Sure, the boss fight is pretty straightforward, but it’s a spectacle that Star Wars fans will love, so be sure to search around and chat with everyone.

Each of the episodes takes roughly two hours to complete, though you’ll likely find yourself getting distracted in the hub areas, so tack another hour or so on if you’re a collectable fiend. Each of the 20 or so worlds is lovingly created and gorgeous in spite of their toybox appearance and the attention to detail is unbelievable. Everything on screen is filled with life, from random citizens on Coruscant to the mouse droids on the Death Star. Even if you prefer a more mature Star Wars experience akin to Fallen Order, you’ll undoubtedly be blown away by the love for the franchise that this game exudes.

Unlike the LEGO Star Wars games of old, The Skywalker Saga is fully voice acted, though there’s an option to turn on mumble mode if you’d prefer the classic LEGO experience. Outside of Qui-Gon Gin sounding more like Sean Connery than Liam Neeson, the substitutes for the original actors all do a great job at portraying their characters. Even with voice acting, the unique LEGO humour still shines bright, with plenty of slapstick comedy and random, zany actions warranting a laugh in most scenes. The source material itself isn’t even safe, with sly fun being poked at the…interesting decisions…made in The Last Jedi and The Rise of Skywalker. With that said, I found myself enjoying the LEGO retelling of these movies far more than the films themselves, so that speaks volumes.

Why walk when you can Bantha?

TT Games has always done an incredible job at capturing the essence of Star Wars while injecting their own humour into the LEGO games, but The Skywalker Saga is truly their crowning achievement. Regardless of less than necessary upgrade and cover systems, the advances made to the core gameplay elevate the experience to new heights, allowing for gamers of all ages to find the fun in blasting, building and goofing around in the galaxy far, far away. Much Like the opening cinematic that welcomes you to the game, The Skywalker Saga is a thoroughly enjoyable love letter to everything Star Wars. 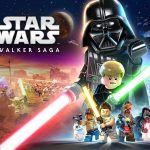 LEGO Star Wars: The Skywalker Saga Review
Blocky Brilliance
Improvements on the already entertaining LEGO formula such as a tighter perspective and reworked combat systems make The Skywalker Saga's retelling of the nine mainline Star Wars films a blast for fans of all ages.
The Good
The new perspective brings you into the world
Excellent new additions to gameplay
Beautiful, blocky worlds
A huge roster and varied environments
Fun missions filled with humour
Heaps of content
The Bad
Co-op can feel one-sided
Upgrade and cover systems are needless
Some so-wonky-its-funny voice acting
8.5
Get Around It

LEGO Star Wars: The Skywalker Saga Review
Blocky Brilliance
Improvements on the already entertaining LEGO formula such as a tighter perspective and reworked combat systems make The Skywalker Saga's retelling of the nine mainline Star Wars films a blast for fans of all ages.
The Good
The new perspective brings you into the world
Excellent new additions to gameplay
Beautiful, blocky worlds
A huge roster and varied environments
Fun missions filled with humour
Heaps of content
The Bad
Co-op can feel one-sided
Upgrade and cover systems are needless
Some so-wonky-its-funny voice acting
8.5
Get Around It
In this article:LEGO Star Wars: The Skywalker Saga, pc, ps4, PS5, Star Wars, switch, TT Games, Warner Bros. Interactive Entertainment, Xbox One, Xbox Series X&S