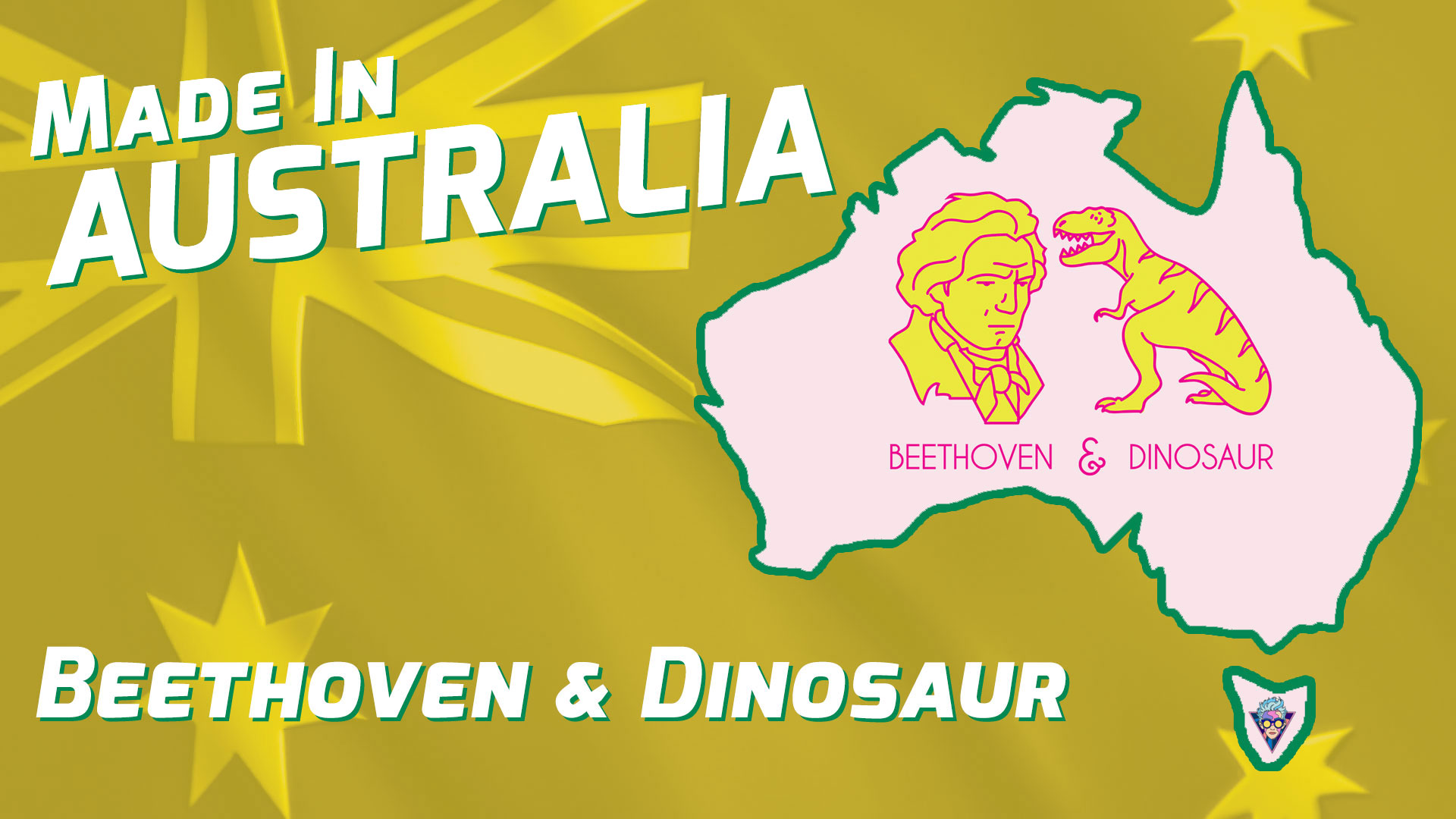 Back in mid-November 2008, Johnny Galvatron, then frontman of Australian 80s-inspired electro-rock band The Galvatrons was sharing the stage with a little band known as Def Leppard, preparing to release their debut album Laser Graffiti. Fast forward to 2021 and the former rock star is now in what is hopefully the release year for his studio’s debut game The Artful Escape.

I remember watching a trailer for The Artful Escape for the first time before PAX Australia 2016 and seeing the name Beethoven & Dinosaur splash across the screen and thinking what a unique studio name that is. If you’re like me and have wondered whether there is some elaborate story behind the studio’s name, you’re going to be disappointed because there isn’t one, with the question eliciting a far simpler response than I expected.

A lot of people are probably thinking ‘how?’ How can you go from touring with Def Leppard to founding a game development studio? It’s certainly one of the wilder pathways to video games that we’ve heard about, but for Galvatron it was more that certain parts of the musician lifestyle had started to wear thin.

“I liked being on stage, I like being backstage at festivals and meeting people you’d previously known from posters, and I liked being in the studio. Pretty much hated everything else about it,” says Galvatron, who continues by adding that he hated touring the most.

“It was more the reality of touring in a mid-tier band, the sacrifices you had to make, the conflict with bandmates. The partying gets old. For me anyway. Keith Richards loves it.”

The Geelong-born artist explains that he just wanted to start fresh in a new scene that would allow him to squeeze his creative juices in a few different fields.

“Games seemed like a place I wanted to be,” Galvatron shares. “There’s something really garage about indie game development. I could draw ok, knew music, had spent the last couple of years writing fiction and I thought I had a good kitbag heading in.”

Despite the promise of fame and fortune that comes with a major label record deal and having some radio success with singles When We Were Kids and Cassandra, The Galvatrons’ music wasn’t exactly the flavour of the month in the mid to late 2000s, something that Galvatron himself acknowledges.

“We had a deep love for the music of the past, and our goals were probably lost in a time that would not repeat itself,” he says.

It’s worth noting that The Galvatrons wasn’t some Australian variant of Hanson, where all the members were siblings. Instead, the band name came from the 1986 animated film The Transformers, with the members giving themselves sci-fi-inspired stage names. So while I wish I could confirm that Johnny Galvatron is his real name, sadly it is not.

On the surface going from musician to game dev looks like a surprising career change, but Galvatron, who studied 3D animation at university in Melbourne, had already dabbled in other creative waters before starting Beethoven & Dinosaur, writing a novel and directing Tropfest shortlisted short films before turning his attention to game design. Galvatron lists games such as Kentucky Route Zero, Gone Home, Sword & Sorcery, Limbo, and Night in the Woods as some of the games that have inspired or influenced his work.

Like most game devs, Galvatron’s memories of gaming date back to his childhood, with the Sega Mega Drive the provider of his first gaming adventures.

“I really liked the X-Men game. I would run to show my Mum when I got really far in the game. Looking back, I don’t believe her amazement was sincere,” Galvatron laughs.

Given his musical background, I ask Galvatron if he’d ever considered scoring video games. He tells me that he is the sort of person who would score his own game, an answer that highlights the drive he has to continue to push his creative boundaries. Although he does tell me when asked that if The Galvatrons could score any video game it would be Lee Carvallo’s Putting Challenge.

Wanting to push yourself creatively is an answer I can relate to as a once aspiring rock star who taught himself to play guitar, bass guitar and keyboards by writing and recording my own tracks, and has never learnt a full cover song in 20 years of playing the guitar. Although I never toured with Def Leppard. In fact, I never toured at all.

The origins of Beethoven & Dinosaur begun a few years after Galvatron had left the music business, although he cannot pinpoint the moment that he knew games was the path he wanted to take, but sometimes when you know, you just know.

Galvatron explains that he learned the art side of Unreal Engine, with YouTube proving to be a helpful resource. Alongside him was renowned musician Josh Abrahams, who took home not one but two ARIA Awards (basically the Australian Grammy Awards) in 1999, Abrahams also wrote the hit song Addicted to Bass. Galvatron then put the feelers out by making a short trailer that he sent to Epic to get a sense for what they were looking for. The trailer ticked enough boxes to secure Galvatron a A$20k cheque as part of the Unreal Dev Grant to help fund the game and its subsequent Kickstarter. It was a good injection of confidence that Galvatron needed to reaffirm he had made the right choice to hang up the microphone.

But while Galvatron is a man of many talents, he needed a team of skilled operators to help him bring his vision to life. That’s where programmer Justin Blackwell comes in, the first person Galvatron met in the video game industry and the third member of the studio. Blackwell came as a two-piece package with Sean Slevin, who would go on to be the technical director and project lead for The Artful Escape.

The team would launch the game’s Kickstarter on March 1, 2016, hoping to raise A$50,000 in funds to complete the game’s development. But despite generating some positive media coverage, the studio would fail to reach its goal, raising a total of A$32,569. It was a disappointing blow for the team, who believed they had a truly unique idea in the works. So why did it fail? Galvatron admits he was naïve going in, and that good press coverage doesn’t compare to a solid fan base.

There’s something really garage about indie game development. I could draw ok, knew music, had spent the last couple of years writing fiction and I thought I had a good kitbag heading in

However, the Kickstarter’s failing would be a blessing for the studio, with the project attracting the attention of iam8bit who in turn hooked the studio up with renowned indie publisher Annapurna Interactive. According to Galvatron, who has trimmed the story’s fat, the deal was done after Annapurna flew to Melbourne to check the game out at PAX Australia.

“They liked the demo and the deal was signed the following day,” divulges Galvatron, who has nothing but praise for the team at Annapurna Interactive.

“They have been a support and influence beyond what I could’ve hoped for. Great gaming and production brains to dance about in.”

Since signing with Annapurna, the team and game have gone from strength to strength, with Xbox promoting The Artful Escape during several of its event, none more prime time than Xbox’s 2017 E3 keynote and the company’s own event X019 in 2019. Although Galvatron admits he wasn’t able to fully take in the excitement until after the game’s showing.

“At the time it’s horrifying and I wish I wasn’t in a stadium full of people about to watch it. Will go down as a harrowing moment for me. Mostly I’m proud of the team I work with.”

It may seem a little off-brand for a frontman not to soak in the atmosphere and enjoy being the centre of attention, but when one of the biggest companies in the world is broadcasting your work, your art, to millions of eyeballs around the world, it’d be nigh on impossible not to feel some sort of nerves. However, like all frontmen, Galvatron has a certain aura about him – he’s confident, entertaining and demands your attention. From our brief chat, he comes across as a loveable larrikin – someone who just likes to have fun no matter what he’s doing.

The studio, which is based in Melbourne’s CBD during ‘normal times’ has had to adjust like every other business as a result of the COVID-19 pandemic and continue working on the game from the confines of home. There are currently 12 people working on The Artful Escape and Galvatron explains that the pandemic opened up the team’s hiring practice to talent outside of Victoria and even Australia.

Working from home does have its perks though, with Galvatron able to spend more time with his three-month-old baby, who he claims to teach the mastery of the nunchucks to (I am not able to verify that statement).

When comparing game development to being in a band, Galvatron says that, “Being in a band is 23 hours of waiting around. Gamedev is the opposite. No touring.” Nevertheless, while touring was the bane of Johnny Galvatron the rock star’s existence, he does have some fond memories, saying that the tour with Def Leppard and Cheap Trick was certainly one of the best moments of his musical career. He recalls the last leg of that tour in New Zealand when he had to go on TV in Qantas pyjamas because the airline lost his bags.

As for his game dev career highlights, Galvatron doesn’t point to any one individual moment, instead he says that the biggest highlight has been the friends he’s made on his team. If there is one thing that being around a good crew has taught Galvatron it’s that you can’t and shouldn’t do everything. Along with the team at Annapurna Interactive, Galvatron says that the Melbourne video game scene is extremely supportive of one another and that members of the scene have been a great help in times of need. Galvatron goes on to say that YouTube shouldn’t be underestimated as a resource, especially for upcoming developers.

“If you wanna make a game, you can,” he says. “Everything is on YouTube. If you’re lucky enough to have the time to learn, you can make it. Just don’t make a huge MMO,” he laughs.

The conversation now turns to the future and The Artful Escape’s release date. The game has had its fair share of delays due to things likes COVID-19, the scope of the game increasing over time, and Galvatron breaking his arm skateboarding “like a fucking idiot.” Galvatron remains tight-lipped on when players will be able to get their hands on Francis Vendetti’s adventure, but he admits that he hopes it is soon.

But for Galvatron, who has stacked shelves at IGA, worked at multiple surf and skate shops, worked his magic as a graphic designer and toured the world in a rock band, his game dev journey is only just beginning. It’s fitting that Galvatron’s music industry experiences have influenced The Artful Escape, because like Francis Vendetti, who is on the verge of his first gig, he’s destined for big things.

In this article:francis vendetti, johnny galvatron, made in australia, the artful escape, the galvatrons