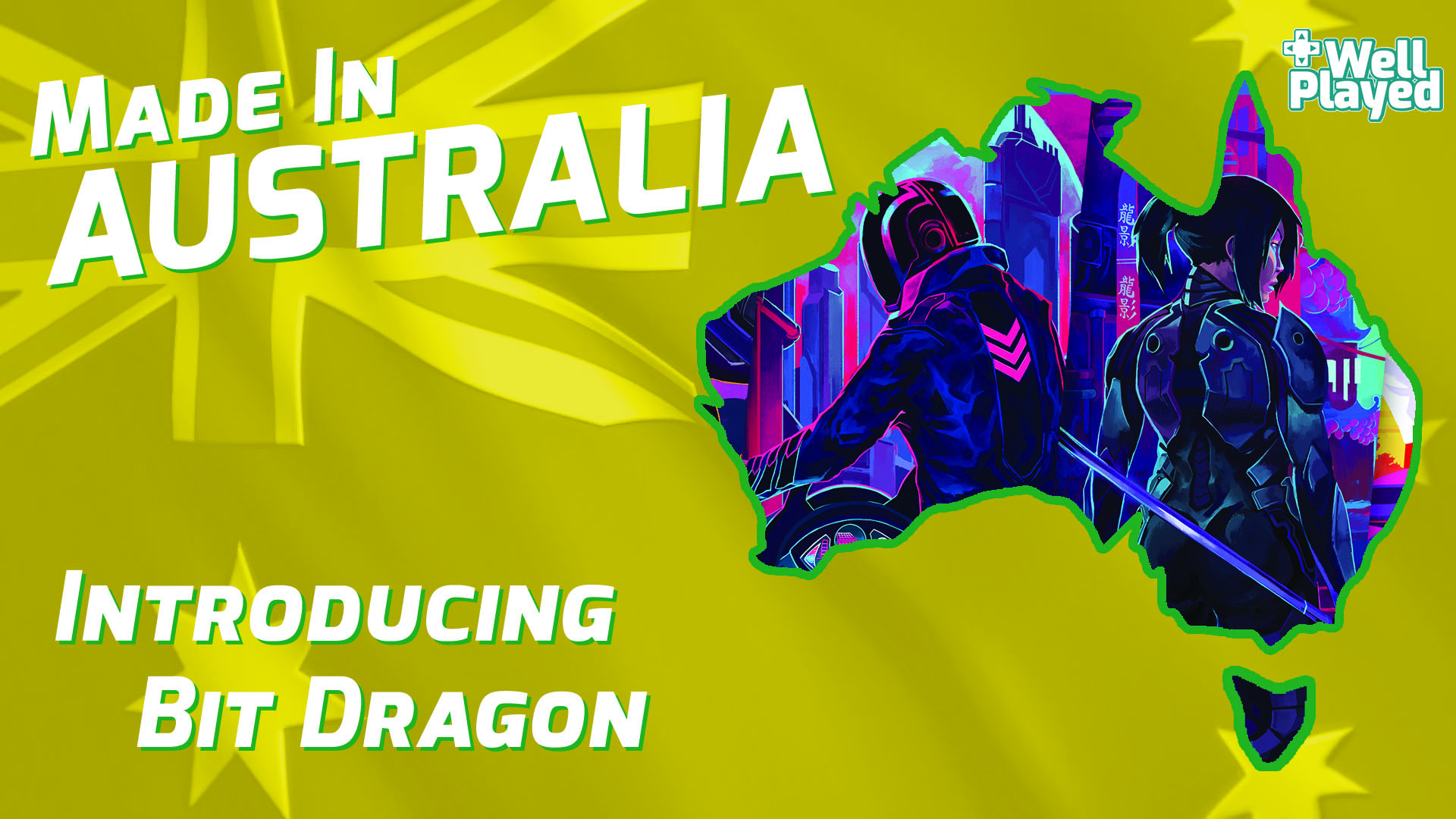 The 80s – what a wonderful time to be alive. Mullets were all the rage, Phil Collins had more gated reverb on his drums than should really be legal, and Carlton was a consistently good AFL team. However, while so much has changed since ‘the good old days’, there’s still a huge sense of nostalgia when it comes to Generation X. It’s such an influential generation so it’s no surprise that its themes, entertainment and fashion have found themselves in constant rotation as trends come and go, and come around again throughout the years since.

One group of developers who have embraced the 80s customs is the Melbourne-based trio Bit Dragon, whose debut game Hyper Jam is a synthesis of 80s visual and aural influences. From the couch party brawler gameplay to the salient synthwave soundtrack and neon-glazed graphics, Hyper Jam is revelling in ‘the good old days’ both from an artistic and gameplay point of view.

Bit Dragon co-founder, director and programmer Roman Maksymyschyn reveals that Hyper Jam was born out of love for couch co-op games. ‘All of us in the dev team grew up playing couch co-op games with/against our friends’, he says.

It’s a common emotion felt by a lot of Millennials who grew up playing games alongside their mates at LAN parties or sleepovers, and while the introduction of online play has opened up more possibilities, there’s still nothing better than beating your mate at a game and letting them know all about it face-to-face.

The studio itself though did not come about because of some collective devotion to anthemic hits of Duran Duran or the cerebral visuals of Blade Runner. Instead, Maksymyschyn, Sam Bonifacio (co-founder and programmer) and Geordie Hall (co-founder and programmer) – who were developing Hyper Jam in their spare time – went to Game Developers Conference (GDC) in 2017, and after chatting with other developers they decided to formally band together and develop Hyper Jam full-time, officially forming Bit Dragon as a result.

‘It was very exciting and inspiring to talk to other indie developers who came from a similar background to us and had found success in making their own games’, says Maksymyschyn when reflecting on GDC 2017.

However, while Hyper Jam is Bit Dragon’s debut release, Maksymyschyn reveals that the members came from other studios and projects.

‘I worked as the lead developer at an indie studio in Melbourne for about a year and a half before we decided to do full-time Bit Dragon work’, says Maksymyschyn.

‘I have also done a ton of game jam games with various teams over the years, which is something I really enjoy but haven’t been able to find time for recently’.

Running a games studio was always a dream of Maksymyschyn’s, and by the age of 24 he had accomplished that dream. But for Maksymyschyn the real joy is being able to develop games that bring people together and allows them to connect in interesting ways.

Maksymyschyn, who graduated with a degree in Computer Science and a degree in Games and Interactivity has been coding for around eight years. But his introduction to game design came at a much earlier age (eight years old to be exact) thanks to programs like Multimedia Fusion.

He credits his grandma for getting him into game development, who herself was a fan of gaming and used to dabble in programming from time to time.

‘The very first games I made were at her house, and I enjoyed it so much I haven’t even really thought about doing anything else as a career since’.

While his earliest memories of video games is playing Trolls on DOS.

‘Looking back on it now it doesn’t seem like the best game, but I was obviously interested at a very young age’, he laughs.

Before jumping into game development full-time, Maksymyschyn worked with 3D simulation software at ANCA and then as a contractor with the Australian Defence Force.

Maksymyschyn admits that if game development fell through he’d land a gig somewhere in the programming world, either that or he’d be a professional Street Fighter player.

Why Street Fighter? Not only is it one of Maksymyschyn’s favourite franchises, but back in the days of Ultra Street Fighter IV Maksymyschyn was the highest ranked Dudley player in Australia and eighth on the global rankings.

I love the attitude of the Australian game dev community, I think overall everyone is very eager to help each other out and see each other do well

While developing Hyper Jam eats the majority of his time, Maksymyschyn admits he tries to play games when he can – Celeste and Pikuniku are two games he’s enjoyed recently due to their relaxing nature. However, he finds it hard sometimes to take off his developer hat and just enjoy games.

‘I do find it hard to switch off and just play games without analysing them from the perspective of a developer though’, the Bit Dragon director confesses.

Bit Dragon’s lair is based at The Arcade in South Melbourne, a creative hub filled to the brim with development studios all honing their craft on unique and eclectic gaming experiences. While you might think that this sounds distracting – even somewhat chaotic – Maksymyschyn and the Bit Dragon team enjoy having experienced developers on-hand who are more than happy to help should it ever be requested.

‘It’s a great space full of many other developers, so it makes it very easy to help each other out when we have questions about anything’, he states.

‘I personally really enjoy it, in general Melbourne’s game dev scene is very friendly and open, so everyone I know is happy to talk about any aspect of their work, and would be happy to see each other succeed!

‘I love the attitude of the Australian game dev community, I think overall everyone is very eager to help each other out and see each other do well, and you can see the quality of the games being produced locally rising as a result which is great’.

Hyper Jam in all its neon glory

It’s this support network that young and upcoming developers lean on when times get tough. For indie developers, one of the hardest things is juggling a multitude of roles.

‘You really do end up having to be a master of everything when you are trying to make, manage, sell and distribute your game with such a small team’, says Maksymyschyn.

‘You have to pick your battles and often have to make pretty hard decisions about where to spend your limited resources, which can be hard when you are comparing your game to AAA titles that don’t have those kinds of limitations’.

Like a lot of Melbourne-based studios, Bit Dragon is supported by both grants and personal savings, with the team receiving funding from Film Victoria and Epic Games (Unreal dev grant) to help bring Hyper Jam from idea to reality. However, Maksymyschyn hopes that more studios get the opportunity to utilise funding in the future.

‘As for the government funding we are really lucky to have programs like Film Victoria’s API and Release Funding grants, but if there is any way to further expand that pool and allow more Victorian talent to shine of course I am all for it!’

Hyper Jam drew a crowd wherever it was shown off

Aside from funding, getting early prototypes of Hyper Jam into players’ hands and garnering feedback is what helped the project blossom early doors. The Bit Dragon team showcased early builds of the game at cinemas, libraries and bars, gaining invaluable feedback in the early development stages.

‘I think having feedback in the early stages of development is really important’, says Maksymyschyn.

‘It is much easier to change some of the more fundamental things about the game’s design in the prototype phase than later down the line’.

However, with the amount the team showed off the game in its early stages I asked Maksymyschyn if there was ever too much early feedback; could a game’s vision become distorted due to too many people throwing in their two cents?

‘I personally think that it’s good to get internal feedback from industry peers and the like as early as you can’, he replies.

‘However you still need to be careful about selecting your audience since it can be hard to clear the first impression someone has of your work, and it can be difficult for people outside of the industry to picture the final version of something particular in regards to audio/visual elements’.

‘We strived to make Hyper Jam fun to play before it even had any graphics to make sure that we were building upon a strong core, and I think that was a very important part of making a game. It makes me sad when I see a very pretty game, or a game with lots of features, only to play it and find that it is not actually enjoyable to play’.

You have to pick your battles and often have to make pretty hard decisions about where to spend your limited resources, which can be hard when you are comparing your game to AAA titles that don’t have those kinds of limitations

Maksymyschyn admits that developing Hyper Jam has been an adventure, and although it’s too early to tell what they could have done differently, the biggest eye-opener has been just how much work goes into getting a game from the prototype stages to a released product.

‘I have a lot more admiration and respect for the developers of the games I have played over the years now that I have had to go through that process myself’.

It comes as no surprise that Maksymyschyn’s parting advice to budding developers is to crack open your engine of choice and to start creating.

‘Nothing beats hands-on experience. For me, participating in game jams was a great way to hyper-accelerate my learning and force me to actually finish projects that I started, which is a skill in itself.

With Hyper Jam out in the wild (you can read our review here), Maksymyschyn states they are working on additional content for the brawler they hope to release in the future.

But as for what comes next for Bit Dragon, the team are playing it by ear. Maksymyschyn reveals the team would consider working with a publisher in the future if they were the right fit, freeing them of some of the heavy liftings that comes with making a game.

However for now, Bit Dragon are going to recharge their batteries, meaning you’ll find Maksymyschyn and his girlfriend frequenting the various vegan eateries around Fitzroy.

As for the rest of us, wherever Bit Dragon land next we’ll be waiting, as Hyper Jam proves this trio has the potential to create great things. In the meantime we eagerly await the upcoming Hyper Jam content.

In this article:bit dragon, hyper jam, journey, made in australia, made in melbourne, Roman Maksymyschyn