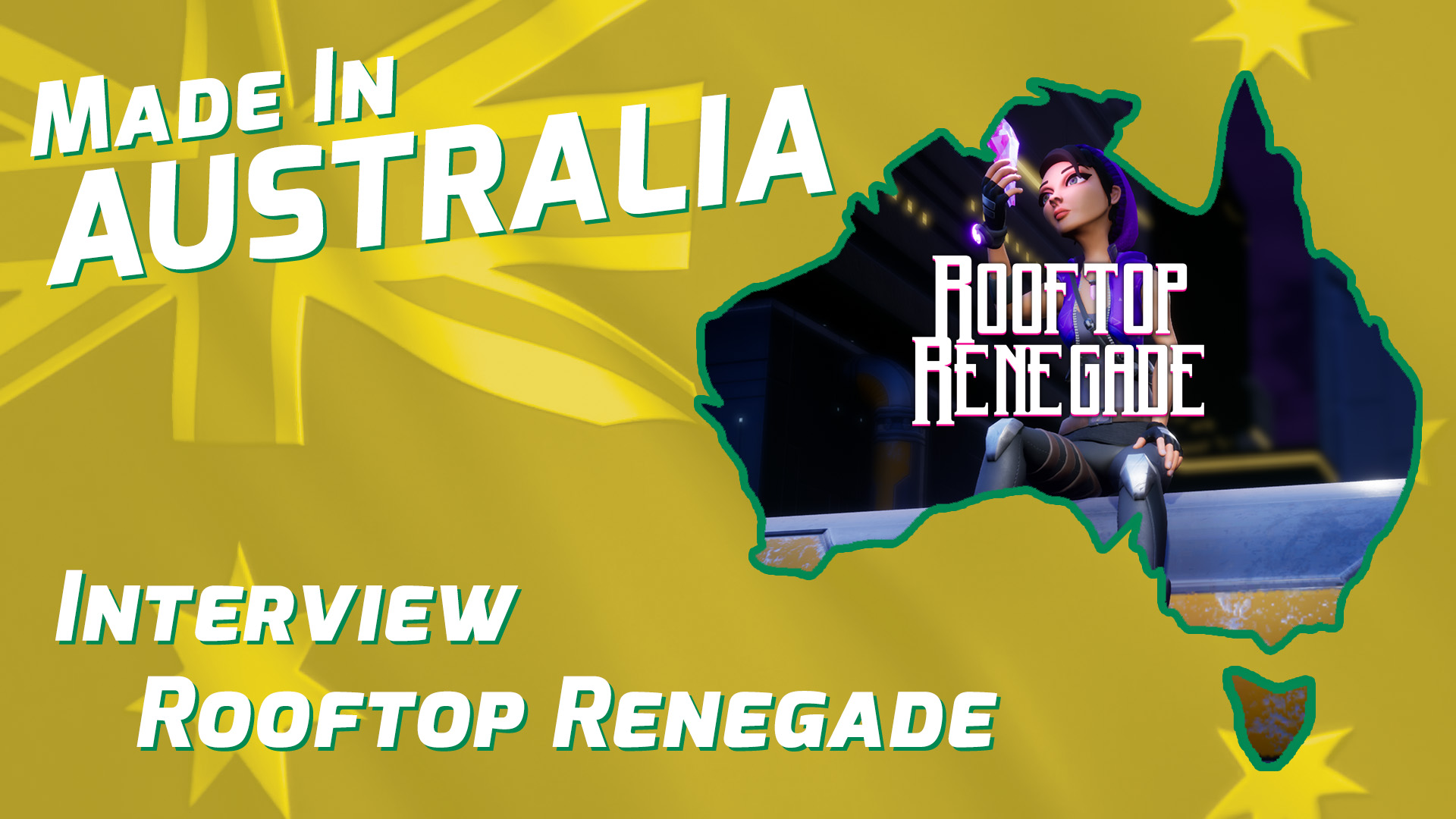 PAX Australia is a great event for the Australian games industry. It helps connect developers, publishers, brands, media and content creators with each other to build working relationships and to further the industry in some capacity. One of the developers we connected with was South Australian outfit Melonhead Games, who were there showcasing their game Rooftop Renegade – a game that we have been meaning to check out for some time.

After going hands-on with the game at PAX Australia, we knew we had to cover both Melonhead and Rooftop Renegade for our Made In Australia segment, and earlier this month we were able to chat with Melonhead’s Game Designer and Producer Patrick Webb and Bluepoint Scripter George Martin all about Rooftop Renegade.

Hover blading is the future

WellPlayed: Thank you for taking the time to chat with us today. You’re developing a game called Rooftop Renegade – give us the game’s elevator pitch.

Patrick Webb: Rooftop Renegade is a sci-fi speedrunner with challenge modes and chaotic multiplayer. Boost, grind and warp through levels while enemies create hazards ahead of you.

WP: When did the game’s development begin and where did the idea come from?

PW: It began at the Global Game Jam in January 2018. We tossed a few ideas around and ended up settling on the asymmetric platformer party game.

George Martin: While we originally started with the intent of just making the party game for the game jam, we felt that we could expand it into something more. We looked to many games for inspiration and have refined the idea through feedback from players.

WP: Does Svetlana have any customisable elements? Is there a rewards system? What is the incentive to play?

PW: The core gameplay is about reducing your times, improving your strategies and conquering harder levels. We have additional unlockable characters aside from Svet planned that have slightly different playstyles, allowing players to try different combinations to master all of the challenges both provided by us and by the community.

GM: The characters open up an extra level of experimentation, finding the best character for certain levels could help improve your best times!

WP: How many people are working on the game?

PW: So far we’ve had four people work on the game, and recently receiving a grant from the South Australian Film Corporation we have a small capability to bring in some external developers to fill in aspects such as audio and animation.

GM: Feedback from our community has also contributed a lot to how the game has evolved. While that isn’t directly working on the game, I like to recognise how much that helps us.

WP: Is there an overarching story as to why you’re running across rooftops from the police?

PW: In a future where corporations control everything, Globacorp’s private security run the city. Having stolen a pair of Chrono Kicks (hover blades with time manipulation powers), Svetlana is using them to travel through time and collect temporal crystals, all while evading Globacorp’s trigger happy soldiers. They have a no-kill order however, they need the Chrono Kicks back in one piece!

GM: We’ll be sprinkling in bits and pieces of the lore through our social channels and of course in the full game.  We really want to form a strong community around our game and hope players can work together to figure certain things out.

WP: Will the game’s multiplayer modes be online or local? If online will there be leaderboards for players to challenge themselves against other players around the world?

PW: We’re focussing on the core experience for our first title, so we’re sticking to local. However, we are building a community element around limited time challenges and special levels.

GM:  I am hoping that with new developments in remote play software, being able to play online with others will still be possible.

WP: We’ve played the game at PAX Aus and it felt very much a level by level game that you can you just pick up and play anytime. Is that what the team was aiming for?

PW: Our design philosophy has always been “easy to play, hard to master”. We want players to feel comfortable playing the game how they most enjoy, be it quick games in the morning, or long sessions trying to marathon the hardest levels.

WP: How long, or how much content will the final game launch with?

PW: Being that a strong focus of our game is replayability, it’s not easy to answer how much time a player will get out of the game. We’ll have an assorted set of levels that we’ve created that will span a few hours, intended to get players started with the game.

GM: We are also currently developing a seed-based level generation system that will allow players to generate their own levels which they can then share with friends and the community. This system also allows for an additional endless mode which will bring its own unique challenge. Having both of these will massively expand the runtime and keep players coming back as we post challenges with specific seeds on our socials.

WP: What are some of the game’s inspirations and influences?

PW: Being a team of developers with very different interests and personalities, each of us have our own influences that we bring to the table. I personally draw a lot of inspiration from worlds such as Jet Set Radio, Overwatch, Blade runner and a ton of other science fiction content with attitude. This aligns really well with our environment artist Alex, who brings the game world to life.

GM: Whereas I have drawn inspiration from the Trials and Sonic games I played growing up. Trying to give the mechanics in our game that same satisfying speed and flow.

WP: Do you have a release window for the title?

PW: The game has evolved so much from its little party game roots, so scope has gradually changed over time. While I can’t give you a date just yet, I can say we plan on releasing it this year.

WP: You’ve confirmed Rooftop Renegade is coming to PC and that you want to bring it to consoles. Can you reveal which consoles and whether it’ll launch on the same day as the PC release?

PW: Until we have our official announcements, I can’t confirm anything, however I can say we want our players to be playing the game quickly regardless of console choice.

WP: You’ve taken Rooftop Renegade to a number of conventions including PAX Aus. How has the player response been? Have you reworked the game’s direction based upon feedback?

PW: I can’t imagine where the game would be without player feedback. While it has never strayed from its core, we owe so much of its development to feedback from players at these events. The passion from players is a huge reason why I wanted to develop games in the first place.

GM:  We have also had some involvement with Australian Speedruns, a few of thier speed runners played our game at Avcon 2019. One of them approached us and asked if they could have a demo of our game to play as part of the Speedrun Marathon at PAX Aus 2019. I was lucky enough to sit with him on stream and talk about the game as he put our developer times to shame!

WP: Good luck with the rest of the game’s development.

PW: Thank you, we look forward to showing you more of what we’ve been cooking up!

GM:  Thanks again for reaching out to discuss the game with us!