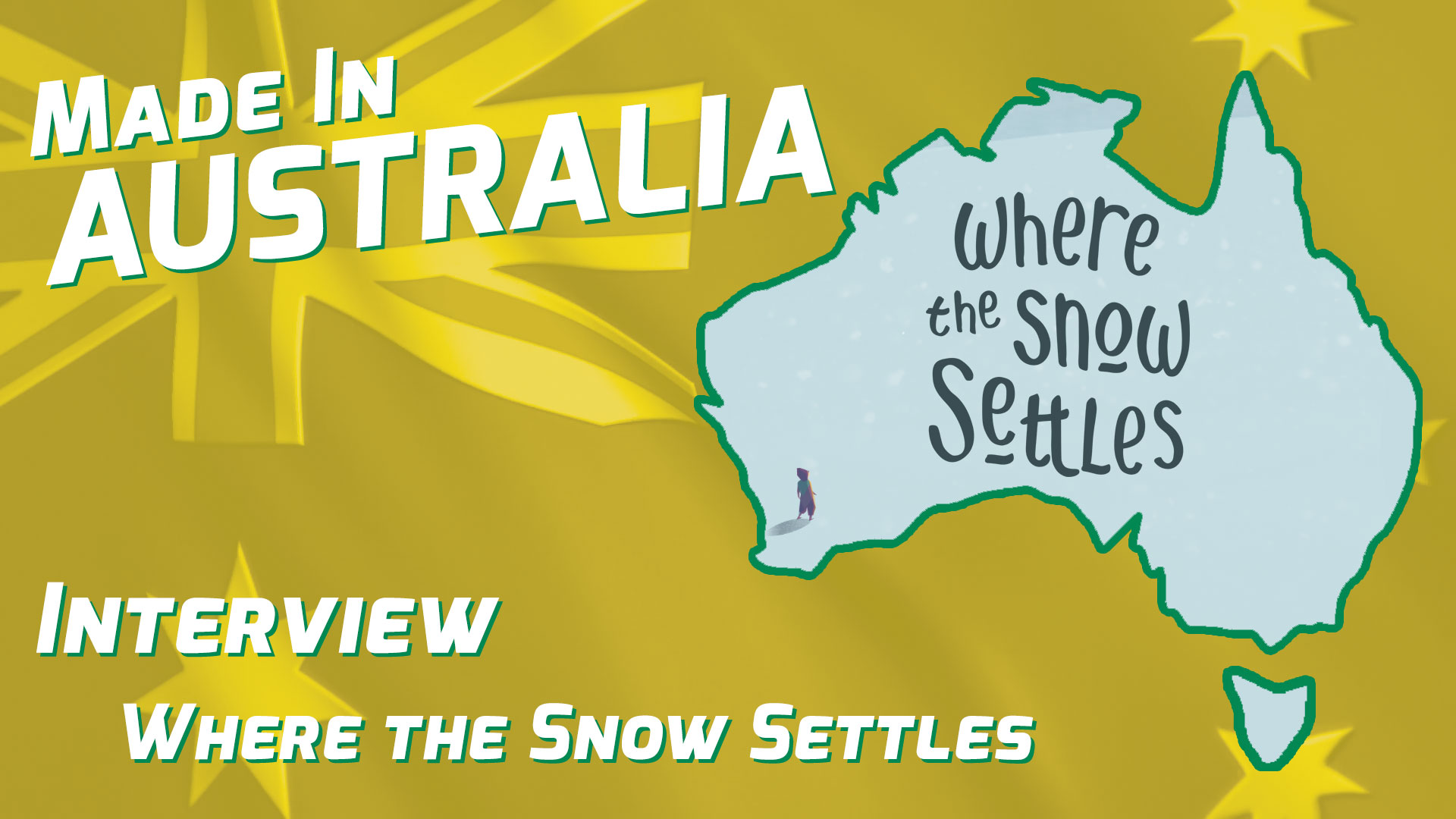 Late in 2018 after attending PAX Australia I was doing a post-mortem on the best indies I managed to go hands-on with during the hectic weekend in Melbourne. One of those games was Where the Snow Settles from Tasmanian developer Myriad Games Studio. As a Tasmanian myself I had to check out what the team was up to, and although what I played was brief, it had an interesting premise and some very cool sound design – more than enough to convince me to keep tabs on it since. It’s been nearly two years since PAX Aus 2018, and after numerous attempts to pry more info from Myriad Games Studio I was finally able to chat with the team about Where the Snow Settles and how much it’s changed over the course of development.

Myriad Games Studio: Where the Snow Settles is a game about loss, growth, and the supernatural. As the world around her crumbles, Aurelia searches for her sister, unravelling mysteries and wonder along the way. This debut from Myriad Games Studio is a moving narrative title arriving on PC and Xbox in 2021. Sign up to our mailing list at wherethesnowsettles.com to get the latest info!

WP: Where the Snow Settles has been in development since 2016, yet despite an appearance at PAX Aus in 2018 there’s been no public showing of the game (trailers etc.) Why is that?

MGS: I think this comes down to many reasons. Primarily, this game is the first major release from a very young (part-time) studio, whose main focus is to understand how to make games and figure out what we wanted to contribute to the world’s library of games and art. We have played our cards very close to our chest; but we’re beating our drum more and will have some cool things to show very, very soon.

WP: So far the game is coming to PC and Xbox One, why have you chosen to bring the game to Xbox over other console platforms?

MGS: We’d love to bring Where the Snow Settles to other platforms in the future – if the opportunity arises and the MGS is in a position to do so. While at PAX AUS 2018 we had the opportunity to talk to Xbox and they were excited about our narrative game. That meeting paved the way for us to be able to launch on a console platform. For our first game from a new studio – we were chuffed.

WP: How many people are working on the game?

MGS: We currently have 5 part-time core members within Myriad Games Studio working on the game – a creative director, lead programmer, lead QA and animator, VFX artist, and producer; but over the past several years we’ve worked with a talented composer, consultants, and past Myriad members. In total, we have had 18 pairs of hands to help us shape our game as well as 14 testers.

Where the Snow Settles or Cradle Mountain in winter?

WP: Where the Snow Settles seems like a more of a passive experience. How long can we expect Aurelia’s journey to last?

MGS: Passive is one word you could use to describe the gameplay – we like to describe it as gentle. We love the idea of losing yourself in a world and we wanted to create a space for people to relax and experience a small story without having to think too much about complex mechanics. If you play straight through the core story without too much looking around, you’d expect the game to last 1-1.5 hours; but I think you’d get the most out of Where the Snow Settles by finding a cozy spot, getting comfortable, and letting the sights and sounds wash over you.

WP: The game’s press kit says that the project has gone through many iterations, with support from the local game dev community. How different is the game from its original concept? What support did you get from the local community?

MGS: Yes, super different! In many ways! Initially, we set out to make an open world narrative adventure… It didn’t take us long to figure out the scope of such a game from a part-time studio was unachievable. Other than managing scope, it’s hard to point at any one time through the concept or pre-production phases and say “this was the moment it all changed”. It was very gradual. But comparing our start to our soon-to-be finish… It’s like night and day.

The Tasmanian games community – Tas Game Makers – has been a wonderful, wholesome, encouraging community. We met our VFX artist and composer through attending events, we made contacts with Screen Tasmania who enabled us to work with consultants and other creatives (some games, some not), and we were able to share, talk, and bond with other like-minded games creatives.

WP: We played the game’s brief demo at PAX Aus 2018 and while we liked the direction of the game, it was still very much a small taste. How much has the game changed since that PAX demo?

MGS: PAX AUS 2018 was a great experience – we got a lot of positive feedback from everyone that played. Since then we have been fastidiously polishing and refining our writing, animations, VFX, and composition.

WP: How much of an impact has the constant changes had (if any)?

MGS: Major impact. No one is ever going to get their idea perfect immediately, and so constant change is just part of the process. The trick is knowing what small (or big) change is needed to move your idea in the right direction. During the concept and ideation phase we really took our time to figure out who our demographic was, what it was they enjoyed about games, and what they would love about Where the Snow Settles. This helped us filter all of our feedback and act on what we knew would have the most positive effect on the game.

WP: What are the game’s main sources of inspiration and influence?

MGS: Oh, gosh. We draw on so many sources of inspiration for this game. Cinema, photography, illustrations, graphic design, our home state of Tasmania, and of course other video games. We have much of our inspiration pinned up around our studio. Specifically, creatives like Wes Anderson, movies such as The Revenant or Blade Runner 2049, and other games like Monument Valley, Kentucky Route Zero, or Firewatch.

WP: Aurelia is described as having underrepresented strengths, can you explain what this means?

MGS: In our experience, female protagonists are often represented as physically strong, loud, and boisterous. We wanted to focus on other strengths like introspection, the ability to listen and learn from others, and compassion. We then used these to shape the mechanics and narrative of the game world.

WP: Aurelia and other characters are faceless. Is there a reason for this decision outside of artistic style?

MGS: Partly artistic. Mostly that faces are hard. During testing we were curious to see if anyone noticed and commented. They didn’t!

WP: With the game’s characters being not voiced, music seems to be a big component of WtSS, with the dialogue linked to musical cues. What was the creative thinking behind this?

MGS: It was initially suggested as a method of solving a problem “how do we give our characters a voice with no VO?” Our composer, Az Scott-Mcguinness, had the idea of creating motifs with instruments and styles that matched the personality of each respective character and when we heard Aurelia and Esta ‘speak’ for the first time we fell in love.

WP: The soundtrack evokes Firewatch vibes at times. Was this a deliberate influence or a just happenstance? Do you have any plans to release the soundtrack when the game releases?

MGS: Yes! We played through Firewatch together as a studio and really dug the visuals, composition, and tone. A soundtrack release for Where the Snow Settles is something we would love to see happen!

WP: From our preview hands-on, it was clear that Aurelia looks up to her sister Esta. Was this relationship inspired by any real-life experience?

MGS: We draw from inspiration around us. Two of our studio members are sisters, so part of that relationship would have factored in our writing of the characters and narrative.

Over the mountain, take me across the sky

WP: You’ve mentioned that you’re re-writing a lot of the game’s dialogue, why is that?

MGS: Game development is iterative, and as I mentioned before, you’ll never make the perfect thing first go. This is especially relevant for dialogue in any story – after listening to feedback from our testers it helped us understand where confusion was occurring or where our message wasn’t quite clear enough. This of course results in re-writing.

WP: Can you give us any indication on when Where the Snow Settles will release?

MGS: Early 2021. We will have an announcement soon.

WP: Thank you for your time and good luck with the game’s development.

MGS: Thank you, it’s been fun!

In this article:made in australia, made in tassie, myriad games studio, snowy mountains, tasmania, where the snow settles