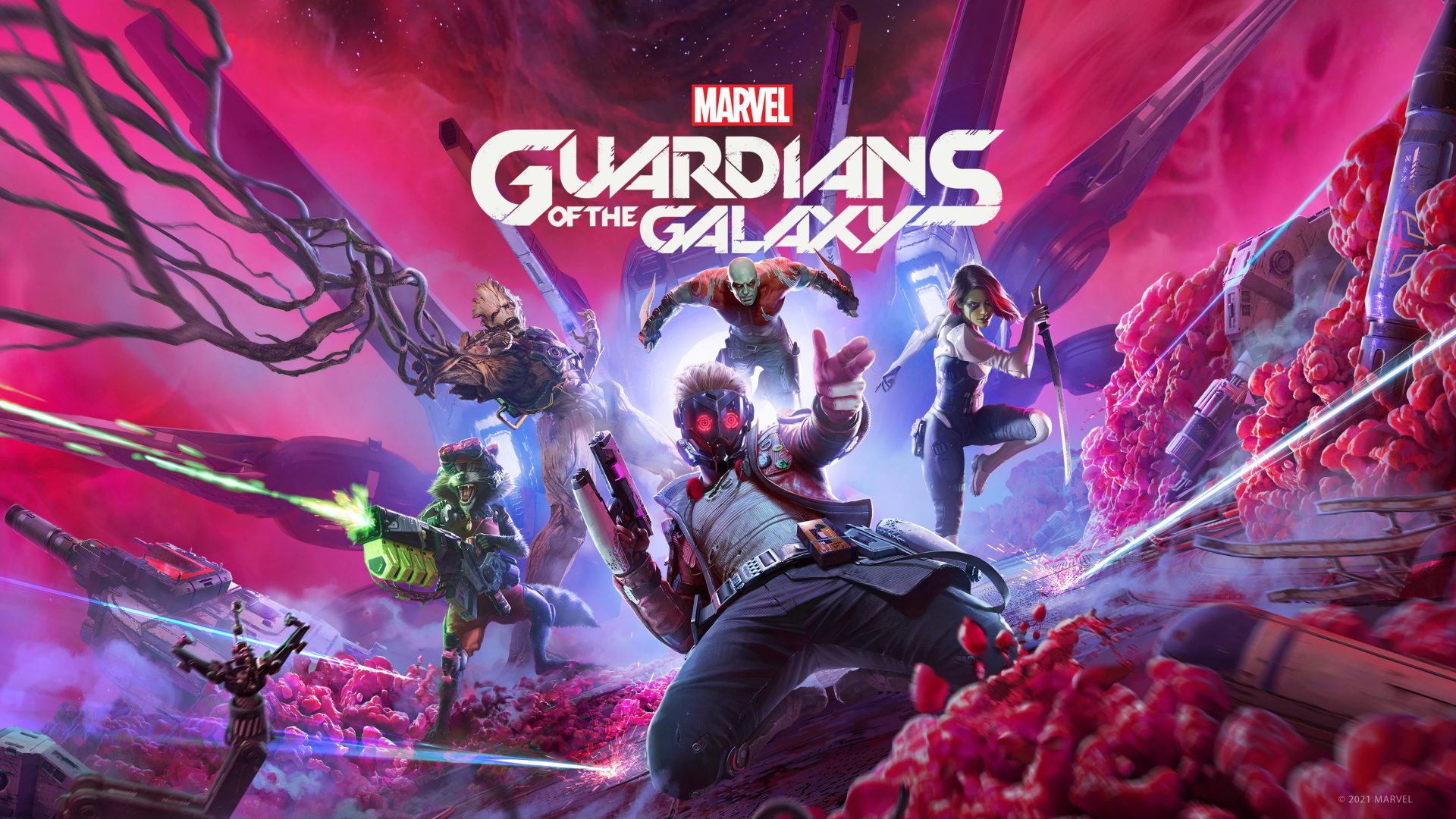 Currently one of the most popular superhero teams around, it can be easy to forget that the Guardians of the Galaxy were relative unknowns prior to their MCU debut. Mirroring this, Marvel’s Guardians of the Galaxy has also been met with several raised eyebrows and concerned looks. With the missteps made by Marvel’s Avengers still looming, many wonder if a linear single-player action game can really do the Guardians justice. Luckily, developer Eidos Montreal has a clear understanding of what makes the cosmic team so beloved, providing an action-packed galactic romp that, despite feeling dated in places, manages to be entertaining from title card to credits.

Led by our player character Star-Lord (aka Peter Quill), the Guardians are still quite new to the whole ‘hero’ business and their ability to work as a team leaves a bit to be desired. The team will be familiar to those fans of the MCU, with Gamora, Drax, Rocket and Groot rounding out the squad. While there’s certainly some inspiration taken from their movie counterparts, Eidos have done an excellent job at making them feel fresh and unique to this universe.

That’s one hell of a team

We meet the Guardians as they prepare themselves for another ill-conceived money-making mission, this time hunting a dangerous beast in a restricted area of space in hopes of selling it to a volatile monster collector. What could possibly go wrong? Of course, things don’t exactly go according to plan for our spacefaring friends, as they wind up embroiled in a religious cult’s tumultuous rise to power. Worse than that, they owe the Nova Corp (space cops) money.

It might sound like I’m being a bit too vague on the story details, but that’s only because it’s worth experiencing for yourself. Witty, heartfelt and occasionally downright funny as hell, the narrative that’s told throughout this 15–20-hour campaign does Marvel’s cosmic characters proud. The story is incredibly well written and takes twists and turns that both comic and casual fans will enjoy. Every character you meet, whether they be friend or foe, familiar or not, is unique, interesting and layered, to an extent that truly impressed me. The overall narrative does drive you from set piece to set piece, like any good action game, but it does far more than that, making you smile, laugh, tear up and definitely cringe (in a good way, I promise).

As I said, Eidos understands what makes the Guardians great, and largely it’s down to their dynamic. The Guardians are constantly chatting, bickering or arguing, both in and out of combat, which may sound annoying, but is actually one of the most endearing aspects of the game. Whether it be Drax casually calling Gamora a traitorous assassin while kicking his feet up and reading a book on the Milano (the team’s ship), or Rocket going into a verbal sparring match with Peter about who the real leader of the team is, the dialogue between the crew is sharp, well written and expertly delivered by a great voice cast that manage to make the characters their own. Watching each member of the team grow and bond over the course of the game is both heart-warming and, of course, very entertaining.

Just like this Dazzler poster, the game is littered with easter eggs for Marvel fans to find

Being the leader of the group, Star-Lord is tasked with making the hard decisions, which manifest as dialogue options. They may not impact the story as dramatically as in games like Mass Effect, but the choices made by the player during conversations can alter how situations play out, with changes to the events at hand ranging from simple to impactful. Choosing your words poorly might just result in a Nova Corp officer thinking you’re an idiot, whereas another decision can decide whether a mission is stealth-based or an all-out brawl. These choices go a long way to making you feel like the team’s leader, though how good of a leader you are will depend on you.

Your leadership duties stretch further than decision making, you’re also depended upon in a fight. Star-Lord rocks dual pistols, rocket boots and can mix it up when close with a good old punch to the face. Using a lock-on mechanic in tandem with active reloading, you’re free to move around battlefields without being bogged down by having to be precise. Throughout the course of the game, Star-Lord’s pistols will gain elemental abilities such as freezing and electrocuting that adds another layer to your moveset. Your combat abilities are fun yet basic on their own, but you’re not just worrying about yourself.

During combat, the other Guardians fight automatically, though they do about as much damage as a pool noodle. So, instead of taking control of the other members, you’re able to give orders for them to use their abilities and target specific enemies. Tied to the directional buttons, each Guardian is useful in their own way. Rocket specialises in AOE damage with his explosives, Groot can immobilise enemies with his roots, Drax can stagger groups of enemies to make them vulnerable and Gamora uses her sword to deal massive amounts of damage to single enemies. Directing combat initially feels a bit clunky, but once you find your rhythm and unlock more advanced abilities, you’ll start having a great time. Blasting away at enemies with your pistols while directing each of the Guardians around the battlefield is incredibly fun and, importantly, it does an excellent job of making you feel like the leader.

Synergising with each other and taking out enemies in unique ways earns you XP that can be spent to unlock abilities, but it also fills the Huddle gauge. When ready, you’re able to call the team in for a mid-fight pep talk. During this time, you’re given two dialogue options: one that sounded better in your head and another that pumps everyone up to kick arse. Pick the correct one and the whole team will get buffed, allowing them to use their abilities without waiting for the cooldown for a short period of time. Choose the wrong one and you alone will get the buff and you’ll also look like a bit of a tool.

From exotic alien beasts to blaster-wielding churchgoers, the enemies that you fight are challenging without ever becoming annoying. Late game enemies are only susceptible to certain elemental attacks or can only be damaged once stunned, so you’ll need to strategise and prioritise to get the job done. You’ll also encounter a number of boss fights during your world-hopping adventure, all of which are unique in their own way. I won’t spoil anything, but some of the beings that you go toe-to-toe painted a giant, stupid smile across my comic-loving face.

The combat isn’t deep by any means, but it’s fun, I just wish it didn’t take so long to get there. During my first hour with the game, my initial optimism faded quickly, and I thought I was in for a long, boring slog. A few hours in and that felt like a distant memory, but I fear that those first few middling moments will potentially put players off.

While combat is simple yet fun, exploration tends to lean more into being just simple. Being linear isn’t itself a bad thing, but the level layout does feel a bit antiquated. Similar to PS3-era games like Uncharted, there’s always one very clear way to progress, with any diverging paths guaranteed to lead to a dead-end that’s ‘hiding’ resources or a collectable. Hopefully, you enjoy ducking under fallen objects and shimmying through tight spaces as well, because our boy Star-Lord does a lot of that. It’s not the end of the world, but it ages the overall experience.

I’d be swapping that leather jacket for something warmer

Luckily, the worlds and environments that you visit make up for the exploration in a big way. Alien worlds fill the screen with vibrant colours and intriguing flora and fauna, while the Milano and other ships are filled with shiny, futuristic gadgets and doodads. The game is gorgeous and varied, with each location bringing something new to the table. It’s also worth mentioning that the character models are amazing, cramming in an insane amount of detail and character into every individual.

The game also performs pretty well under pressure, with the framerate holding steady during even the most hectic of battles. That’s not to say that I didn’t run into any technical issues though. I had to reload a checkpoint here and there as an event failed to trigger and I got the occasional audio bug, but there weren’t any issues that caused any real frustration.

No matter where you are in the galaxy, the scene is set by an incredibly 80s soundtrack that absolutely slaps. Bangers like White Wedding, Every 1’s a Winner and (Don’t Fear) The Reaper crop up predominantly while you’re aboard the Milano, but a random hit will also play during combat after a Huddle. This resulted in a fantastic moment during the emotion-filled penultimate boss fight where Rick Astley’s Never Gonna Give You Up started blaring to motivate the team. Perfection.

Regardless of how synonymous the characters now are with their big-screen depictions, this version of the Guardians of the Galaxy is far and away my favourite. The exceptionally well-written story is backed by a cast of unique and complex characters whose interactions with each other are equally hilarious and heartfelt. The fun and frantic combat may take some warming to, but the reliance on team synergy is thematically rewarding and visually impressive. Looking past the few technical issues and outdated exploration, this is an action game that will appeal to comic fans and gamers alike. 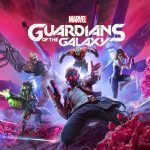 Marvel’s Guardians Of The Galaxy Review
Galactic Good Times
An experience that will satisfy gamers and Marvel fans alike, Guardians of the Galaxy is a fun action romp that tells an amazing story filled with loveable goofball characters.
The Good
Excellently written story and characters
Beautiful visuals and character models
Combat is fun once you warm to it
Heaps of references and deep cuts for fans
Cracking soundtrack
The Bad
Combat takes too long to get going
Exploration is dated
A few technical issues
8
Good

Marvel’s Guardians Of The Galaxy Review
Galactic Good Times
An experience that will satisfy gamers and Marvel fans alike, Guardians of the Galaxy is a fun action romp that tells an amazing story filled with loveable goofball characters.
The Good
Excellently written story and characters
Beautiful visuals and character models
Combat is fun once you warm to it
Heaps of references and deep cuts for fans
Cracking soundtrack
The Bad
Combat takes too long to get going
Exploration is dated
A few technical issues
8
Good
In this article:Eidos Montreal, Guardians of the galaxy, Marvel, Marvel's Guardians of the Galaxy, pc, ps4, PS5, Square Enix, Star-Lord, switch, Xbox One, Xbox Series X/S