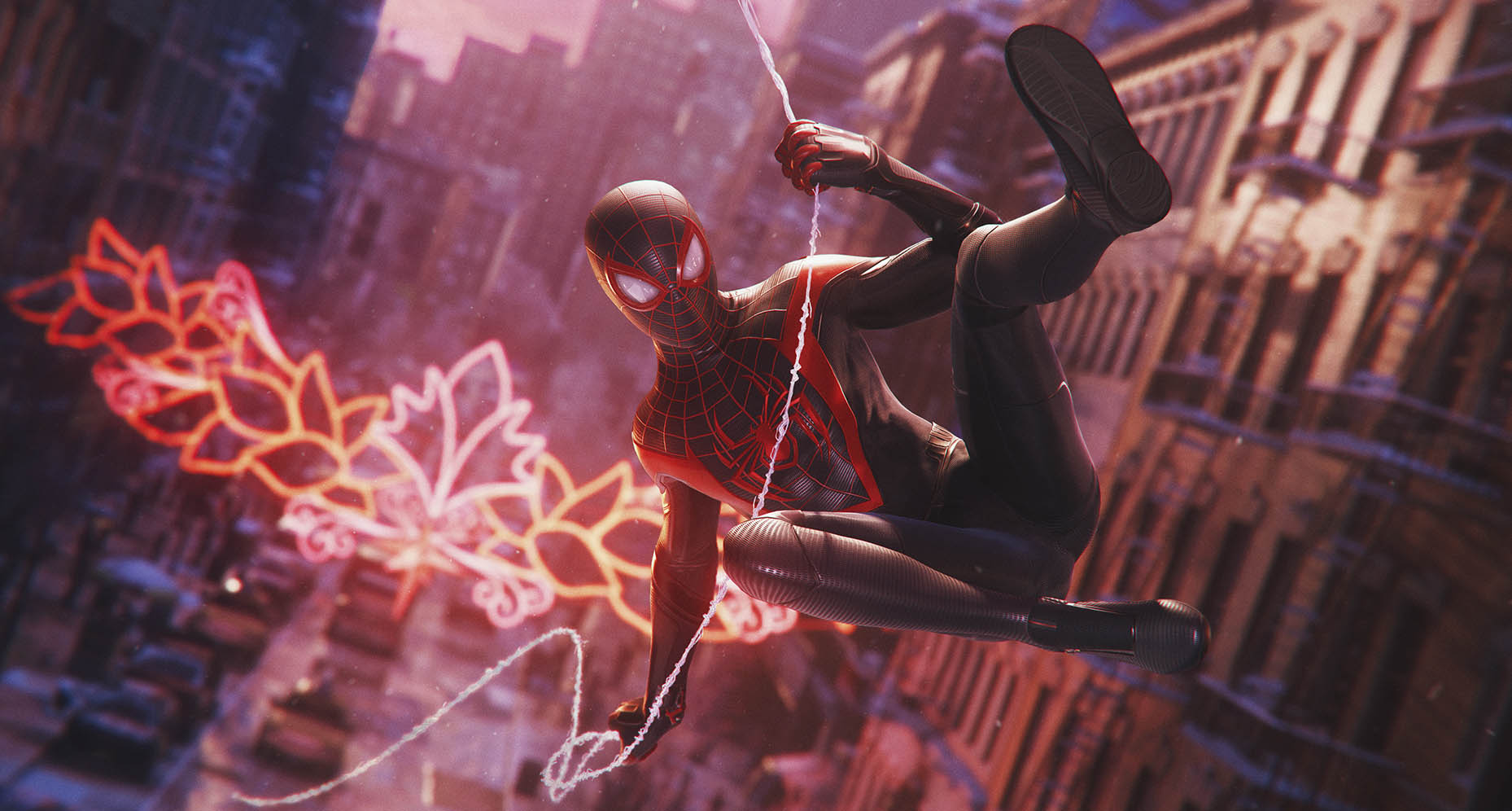 When I reviewed Marvel’s Spider-Man, I said that “Where it falters slightly in its open world, it more than makes up by taking the best bits of the superhero games and films of recent years and mashing them together into one cohesive, exciting and most importantly fun product.” That statement can be applied to Marvel’s Spider-Man: Miles Morales, a pseudo-sequel that’s probably best described as Marvel’s Spider-Man: The Holiday Special. It’s a shorter, standalone story that expands upon the personal journey of Miles Morales, New York’s brand new Spider-Man-in-training.

Miles Morales takes place roughly a year after the events of the last game, where Miles was bitten by a radioactive spider (keep your radioactive spiders contained, people!) and gained his own Spider-Man-like powers. After moving from Brooklyn to Manhattan with his mother, Miles has continued to train in heroics under the mentorship of Peter Parker. Barely a moment after Peter decides to take off on a Christmas holiday though, things go awry and Miles finds himself up against both a criminal group called the Underground as well as Roxxon, a shady energy manufacturer with unchecked power and a secretly dangerous new product about to hit the market. With no OG Spider-Man to guide him and with his family caught in the firing line, Miles finds himself having to grow, as both a hero and a man, a fair shake faster than he might have anticipated.

And that’s the beauty of introducing a new Spider-Man for this sequel/expandalone to the 2018 original. With a fresh face comes a fresh start, and context for going from zero to hero a second time. More importantly though, a new hero in a new town means that Miles Morales has a distinctly different vibe, and one I would argue is more relevant and enjoyable than what came before. The personality of Harlem, its people, and Miles’ heritage shines through every facet of the game’s personality which makes for a game with a lot more flavour than the Peter Parker equivalent. It’s not just the street festivals and slick hip-hop tracks from the likes of Jaden, but a conscious effort from Insomniac to create something that feels authentic to the characters and their community, and to use their platform to embrace inclusivity and solidarity with people of all backgrounds. There’s even a very welcome show of support for the Black Lives Matter movement, which you can see here if you don’t mind spoiling it.

Having a friend like Ganke on hand also has other perks, as Miles’ bestie is a software development wunderkind and creates the Friendly Neighbourhood Spider-Man app to help Miles connect with the community and provide on-demand assistance. In-game, the app essentially feeds players the same side objectives and crime updates that the last game had, only in a more contextual and convenient way. It’s a small change that does a lot to make the game’s non-essential content feel less like busy work and more like a part of Miles’ narrative journey as a new hero.

When it comes to actually being the new Spider-Man, things are largely familiar in Miles Morales. Web-swinging through the city still feels positively incredible, and enemy encounters are a great combination of slick, reaction-based combat and forgiving stealth options. The key differences are in Miles’ Venom powers, new abilities granted by a bio-electrical reaction to Roxxon’s experimental substances. These powers give Miles new electrified moves in combat, and a handy camouflage ability that further augments stealth play. These also come into play in light puzzle-solving moments both in and out of the main story missions, which are never overly complex but still fun. All in all, gameplay changes here are additive, if not overly transformative, but they definitely work to differentiate Miles from his mentor and inject a nice bit of variety.

The critical thing is, Miles Morales is a significantly more succinct experience than Spider-Man was. More akin to an expandalone (I love that word) like Uncharted: Lost Legacy or The Last of Us: Left Behind, it takes the essence of what came before and boils it down to a tidy 8-10 hours (it took me a few more on top of that for 100% completion).

This actually goes a long way to correcting some of the first game’s open-world tedium, even more so because Insomniac has put some welcome extra touches on most of the returning ideas. Following a precedent set by similar open-world titles, the game skirts the fact that much of its side objectives are repeated a number of times by tweaking them just enough each time that they still feel fresh. Going around the map and checking off objectives feels a lot less exhausting when tasks are peppered with fun surprises or the aforementioned puzzle-solving elements that make use of Miles’ unique new powers. Brevity really works in the game’s favour, even in the pacing of its narrative, which is great news.

The slightly-less-great news is that the game itself is priced almost at the level of a full sequel, especially in a world where next-gen has already begun adding a premium to game prices. When Uncharted Lost Legacy launched it carried an RRP of A$54.95, a price that reflected its status as an expandalone title. Miles Morales on the other hand, has an RRP of $94.95 on both current and next-gen, and that’s for the standard edition that excludes the remaster of the first game. Of course, it’s bound to be found cheaper than that in places, but still, it’s a big jump up that might be a hard pill to swallow for anyone who factors dollars-per-hour into their video game purchases.

While I won’t be lucky enough to have access to a PlayStation 5 until launch day, Miles Morales looks superb even on the aging PlayStation 4 Pro – it’s a reminder that there’s life left in the old girl yet. Manhattan looks every bit as good as it did as part of the original game’s New York map, with the added benefit of the holiday season bringing festive spirit and snow. I remain in awe of the game at street level, the feeling of swinging through the city wouldn’t be anywhere near as exhilarating were it not for the impressively-dense crowds, especially given the way they’ll turn their heads to gawk or stop for a fist bump and a cheeky selfie. The attention to detail is as impressive as ever, with an absolutely ridiculous number of unique animations for Spider-Man alone.

Performances are great all-round, with a surprise Troy Baker heading up Roxxon’s villainous leader, but Nadji Jeter and Griffin Puatu shine as Miles and his best friend, Ganke Lee

And of course, characters shine here. Insomniac’s penchant for animation continues with some stellar motion cap, and the models themselves look phenomenal (especially all of the great new suits). Much has been made of the decision to change the face model for Peter Parker, mostly from the unfortunately predictable response by pockets of the community, but in my eyes the new Peter is a vast improvement. Performances are great all-round, with a surprise Troy Baker heading up Roxxon’s villainous leader, but Nadji Jeter and Griffin Puatu shine as Miles and his best friend, Ganke Lee. Oh, and a cat named Spider-Man basically steals the show, if you ask me.

Where Miles Morales does falter a tad though is in polish, which is something that I’m surprised to be saying. Throughout my time with the game I experienced a significant number of hard locks and crashes as well as a variety of awkward but less game-breaking bugs, and I understand that similar issues have been widespread on both platforms. I’ve been told a launch-ready patch is being prepared, so hopefully that alleviates some of these issues, but at the time of writing this was not yet available.

Miles Morales is a perfect example of “less is more”. Now that the fantastic traversal mechanics and slick combat of Insomniac’s Spider-Man games are already established they don’t quite do the same job of covering for the game’s more rote open-world design, but brevity and an extra shot of variety go a long way. Miles is also a compelling and important lead that deserves the extra love, and Insomniac delivers his narrative with impeccable production and attention to detail. Be prepared to pay sequel money for something that isn’t quite that, but whether you’re rolling with a PlayStation 4 or lucky enough to be rocking a PlayStation 5 come November 12 this is a seriously compelling exclusive for both platforms. 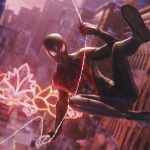 Marvel’s Spider-Man: Miles Morales Review
Morales Is More
Miles Morales is a worthy standalone addition to Insomniac's excellent Spider-Man game and a compelling part of the PlayStation 5 launch lineup, even if it does seem a little pricey
The Good
Miles is a far more interesting Spider-Man
Brevity and extra variety really help the pacing
Still as fluid and fun as ever
Animations and detail are still absolutely stunning
Spider-Man (the cat)
The Bad
Wow factor is lessened the second time around
Quite pricey for a glorified expansion
Currently prone to crashing and annoying bugs
8
Get Around It

Marvel’s Spider-Man: Miles Morales Review
Morales Is More
Miles Morales is a worthy standalone addition to Insomniac's excellent Spider-Man game and a compelling part of the PlayStation 5 launch lineup, even if it does seem a little pricey
The Good
Miles is a far more interesting Spider-Man
Brevity and extra variety really help the pacing
Still as fluid and fun as ever
Animations and detail are still absolutely stunning
Spider-Man (the cat)
The Bad
Wow factor is lessened the second time around
Quite pricey for a glorified expansion
Currently prone to crashing and annoying bugs
8
Get Around It
In this article:insomniac games, kieron verbrugge, Marvel, miles morales, next gen, PlayStation, playstation 5, ps4, PS5, review, Sony, Spider-Man, wellplayed