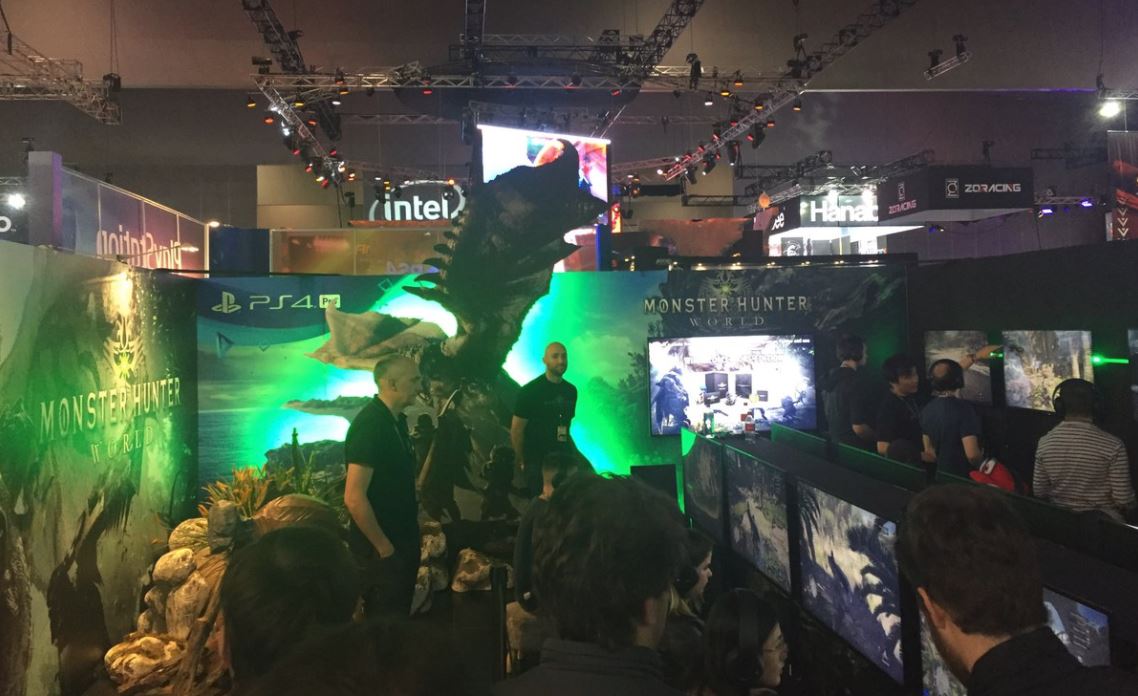 PAX AUS 2017 provided me with the opportunity to get my greasy, grabby hands all over Monster Hunter World for a time – and what a time it was.

I have had an ongoing, confusing relationship with the Monster Hunter series, with frustrations and joy poured upon me in equal amounts. On paper, the series offers me an experience that I know I will enjoy – a boss battle simulator that will translate the big-time encounters I have enjoyed in other genres (particularly MMOs) but in a dynamic way that doesn’t feel cheap. When I shoot an arrow, I want to aim and fire that sucker entirely based around my input – not in a manner that I push a button titled ‘ARROW SHOT’ and my avatar loads and fires a canned animation that communicates an arrow has been fired, without it ever actually existing in the game world; it’s just a hollow graphic that loosely translates to ‘Boss health -10’. I’m rambling.

But, I am rambling for a reason! The word ‘action’ is thrown around a lot in the video game world – but what is action? The dictionary definition may be a boring one – but in the virtual realm the imagined sense of action is one of dynamic player activity, with player choice rapidly being questioned over and over as you work to truly achieve your epic task. Action (for a gross period in the early 2000s) was almost wholesale replaced with dreaded quick-time events, as amazing set pieces and opportunities devolved into ‘press a sequence of buttons to do the cool thing’.

Monster Hunter has always made it clear that this sense of ‘action’ is entirely in your hands – and the game has no interest in holding those same hands. Any epic outcome you achieve in the Monster Hunter franchise has come from your own blood, sweat and tears. And time.

But, this same level of hardcore-dness alienated gamers like me. These aging relics that grew up in a world of lives and Game Overs were somewhat thrilled that games took a more casual approach to certain mechanics – so much so that when we hit those familiar walls of ‘work for it, you scrub’ we actually felt a little lost. And Monster Hunters of the past did have parts to them that were dinner for some players, but dirt for others.

Which brings me now to Monster Hunter World. A series that embraces the correct method of iteration, identifying what players love and what is considered ‘not broke – don’t fix’, and focusing on areas that could deal with some love. This results in an experience that feels amazingly broad – yet laser focused. The time you have always felt required to invest feels more rewarding, so the time-poor scrubs (read: me) don’t feel intimidated by what is asked of them, yet the seasoned veterans still feel that their beloved franchise hasn’t been watered down to pander to ‘casual filth’. It’s surprisingly apt that the title contains the word ‘world’, because it really does feel like the roof has been blown open and a lot more people are going to be playing alongside colleagues they may never have expected as they hack up meaty monster mobs.

Originally, I was merely excited by what was offered by Monster Hunter World. Post PAX? I am a gibbering fanboy.