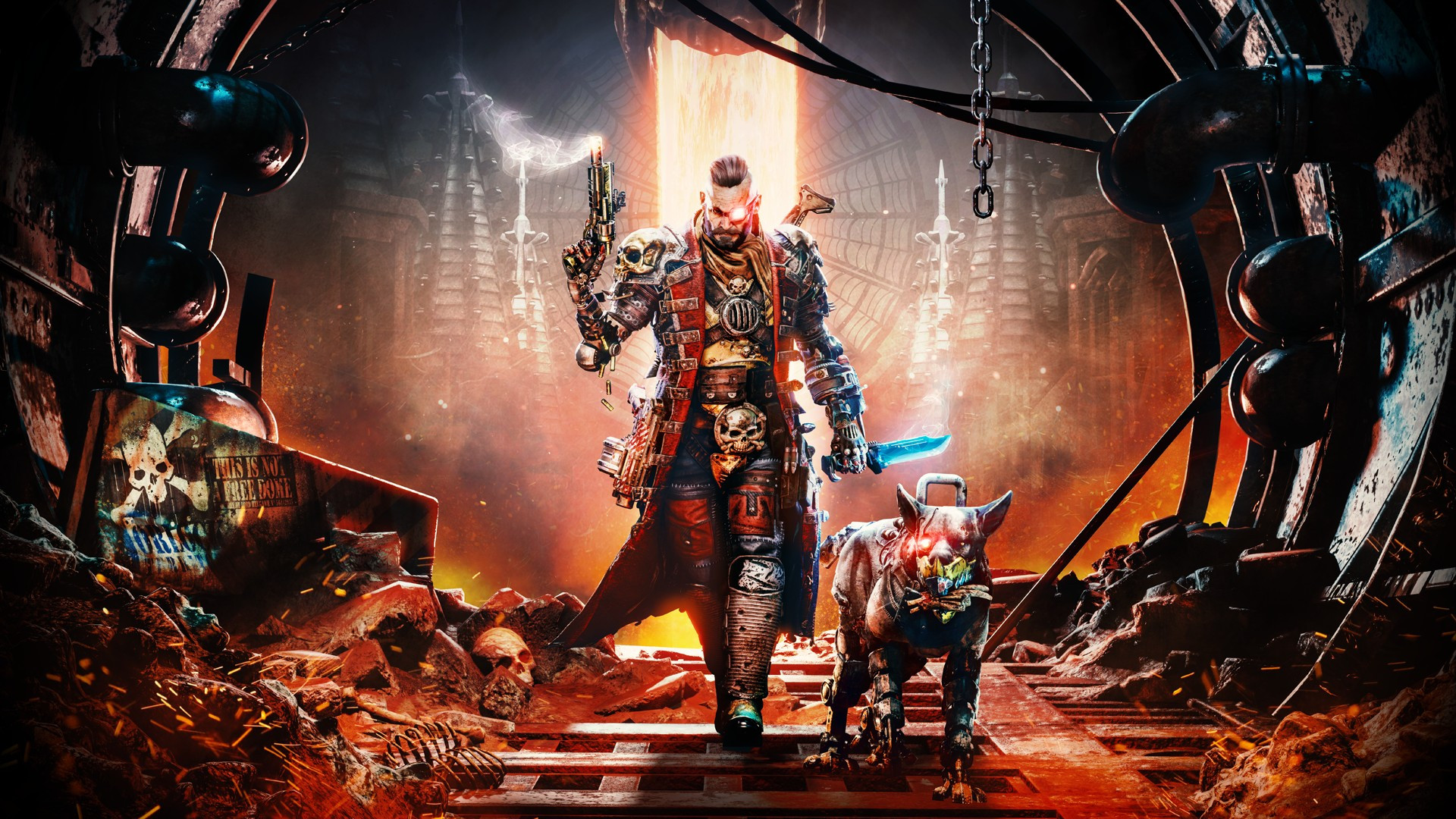 Despite its grim aesthetic and perpetual state of war, the Warhammer 40K universe is one that fills me with hope. With a global pandemic raging on, war and unrest everywhere, systemic racial inequality and a corrupt capitalist infrastructure geared to keeping the poor in the dirt where they belong, it’s easy enough to believe that perhaps even making it 2000 years after the birth of Jesus Christ was a good innings. But according to Warhammer, we have at least another 38000 years of this! Rejoice, peasants. Necromunda: Hired Gun (which roughly translates as Dead World: Hired Gun) continues the Warhammer tradition of bringing cheer the only way it knows how – with people sporting chunky armour killing other people sporting chunky armour in interesting ways in exotic futuristic locales. The game has glimpses of being a decent Warhammer-themed DOOM clone, but for all it does right there are several technical and design flaws make this experience very much short of redemption in its current state.

Looks hectic, but this is basically what an average Melburnian needs to go down to the local Aldi

The titular Necromunda is a hive world, an Imperial planet characterised by an extremely large population that lives in impossibly dense urban sprawls that cover the planet and whose architecture stretches into the heavens. Essentially powerhouses of production, the lowest levels (or under-hive) of these hive worlds is where you want to go if you want to experience the greatest amount of poverty, crime and loose morals. As luck would have it, you’re a bounty hunter in the under-hive – and while it’s perilously dangerous at all times, there’s no shortage of work.

Full disclosure – I had to Google a lot of what I learned about hive worlds, because the game does a painfully terrible job of selling its story and context. At no point did I really know for what or for whom I was fighting, with the story basically boiling down to some garbled nonsense about warring factions and mysterious figures stirring up conflict. All I knew was that I was a bounty hunter, who for unknown reasons is a bit of an arsehole, who kills things and has a cyber dog that also kills things. The game was desperately crying out for a codex of some description which described the various factions and lore, because what little exposition you’re treated to in the jerky, awkward cutscenes is patently inadequate.

Even Dr Dre knows that sometimes you need to slow down

The game is in every way a clone of the rebooted DOOM series, which in and of itself is not a bad thing, but the game fails to pick up on vital design features that make DOOM’s fast and furious gameplay so slick and satisfying and not just…fast

So let’s forget the story (not difficult I promise you), how does this baby actually play? Kind of poorly unfortunately. The game is in every way a clone of the rebooted DOOM series, which in and of itself is not a bad thing, but the game fails to pick up on vital design features that make DOOM’s fast and furious gameplay so slick and satisfying and not just…fast. You’ve got a pretty impressive movement suite in the form of wall running, double jumping, dashing and sliding, plus a handy grappling hook, and combined together these will have you flinging yourself around in first-person across large arenas while trying to shoot things. The movement is as slippery as a mackerel covered in Vaseline, but it’s essential to learn how to wrangle that slimy mackerel because if you stand still then death is not far away as the enemies come thick and fast. The pace is dialled up quite high, but once you get accustomed to it there’s actually a great sense of freedom to movement (except for the maladroit wall running). However, a glaring and persistent issue is the fact that the game fundamentally cannot handle its own speed when turning the camera while moving, causing a brain-melting level of jitter on the screen like you’ve somehow been transported to that weird boat ride in Willy Wonka and the Chocolate Factory (the Marilyn Manson version at that). It breaks any sense of fluidity in the action, which is really the life blood of a game featuring this break-neck pace. The result is feeling like you’re playing from the perspective of an unbalanced fidget spinner in the hands of a kid with ADHD.

You have access to a fair range of pistols, shotguns, rifles and heavy weapons, and to be fair these are all visually diverse and have a great punchy feel to them. However, given the speed of movement it’s not really practical to try and aim down sights like the game insists, and it’s far easier to simply hip fire. DOOM was aware of this issue, which is why it had no ADS feature, but Necromunda didn’t get that memo. Bolstering your standard arsenal is a series of bionic powers of varying usefulness, however their deployment is tied to an awkward wheel that makes it difficult to accurately deploy the particular power you want in the heat of battle. Perhaps if time slowed while you accessed this bionic wheel it would make more sense? Whoops, I’m describing DOOM again. I ended up just relying on a couple of bionic powers to get me through and a heavy gun that had high damage and good hip firing, but combat is still laughably unbalanced when you realise the overpowered nature of the grappling hook. The grappling hook (which is on a very short timer) not only pulls you towards an enemy, but stuns them too and opens them up directly for a glory kill instakill takedown. I will admit that even if it breaks the game a bit, the grapple-takedown combo is pretty damn satisfying, but the takedown animations (while varied) are about as smooth as I used to be with the ladies after eight Jager bombs at the uni pub.

Despite the jankiness of the combat, if the FPS counter (whose existence I appreciate) is to be believed then the game runs at a fairly smooth 60 fps, which is essential for a fast-paced beast such as this. I did have multiple instances of the game crashing however, which is all the more frustrating given there are no mid-level checkpoints.

It’s not all DOOM and gloom though (see what I did there?), as from a visual perspective the game is positively stunning (unless you’re turning and moving the camera of course). I’m sure Warhammer 40K fans will revel in some of the art and character designs on display, which feature that classic over-the-top feel with plenty of dramatic flair and wildly improbable armour and weaponry. The game’s thirteen campaign missions each feature a very unique aesthetic that has been meticulously crafted with no small amount of love for the source material. Environmental detail and the epic sense of scale are nothing short of amazing, with the lighting and particle effects really selling the atmosphere and making each level wondrous to behold. I also love the chugging metal backing tracks that feature prominently during the frantic action, with some really tidy original riffage to keep you engaged in the violence.

As a reviewer, it’s impossible for me to recommend this game in its current state. Going beyond mere AA jank, there are some serious technical and design issues that make Necromunda a title that’s hard to love. But despite all that, I will say that I found myself enjoying it for what it was. The godly level art is probably a large part of why it drew me in, but there’s a sense that the super-fast locomotion in combination with guns and bionic powers is something that the developers could conceivably have pulled off given enough time. As it stands, it falls short of its lofty ambitions, but you get the feeling that cult status perhaps beckons for this one if it gets a healthy dose of polish. 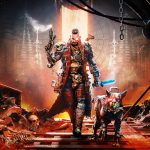 Necromunda: Hired Gun Review
Space Orcs, Motherfucker
Necromunda: Hired Gun features a stunning art direction, but with a garbled story and more technical and design blemishes than you can poke a space stick at, this one's bound to be buried in the under-hive.
The Good
The level art is fantastic, drawing on the source material to good effect
Be damned if I don't love a little metal in my games
Guns feel satisfying
The Bad
Story is poorly told and the world poorly fleshed out through woeful cutscenes
Moving and turning the camera simultaneously causes the screen to jitter uncontrollably
Bionic powers are a pain to select in the heat of battle
The grapple-takedown combo derails the combat balance
Game crashes + no mid-level check points = bad time
4.5
Bummer

Necromunda: Hired Gun Review
Space Orcs, Motherfucker
Necromunda: Hired Gun features a stunning art direction, but with a garbled story and more technical and design blemishes than you can poke a space stick at, this one's bound to be buried in the under-hive.
The Good
The level art is fantastic, drawing on the source material to good effect
Be damned if I don't love a little metal in my games
Guns feel satisfying
The Bad
Story is poorly told and the world poorly fleshed out through woeful cutscenes
Moving and turning the camera simultaneously causes the screen to jitter uncontrollably
Bionic powers are a pain to select in the heat of battle
The grapple-takedown combo derails the combat balance
Game crashes + no mid-level check points = bad time
4.5
Bummer
In this article:DOOM, Focus Home Interactive, hired gun, jank, necromunda, streum on studio