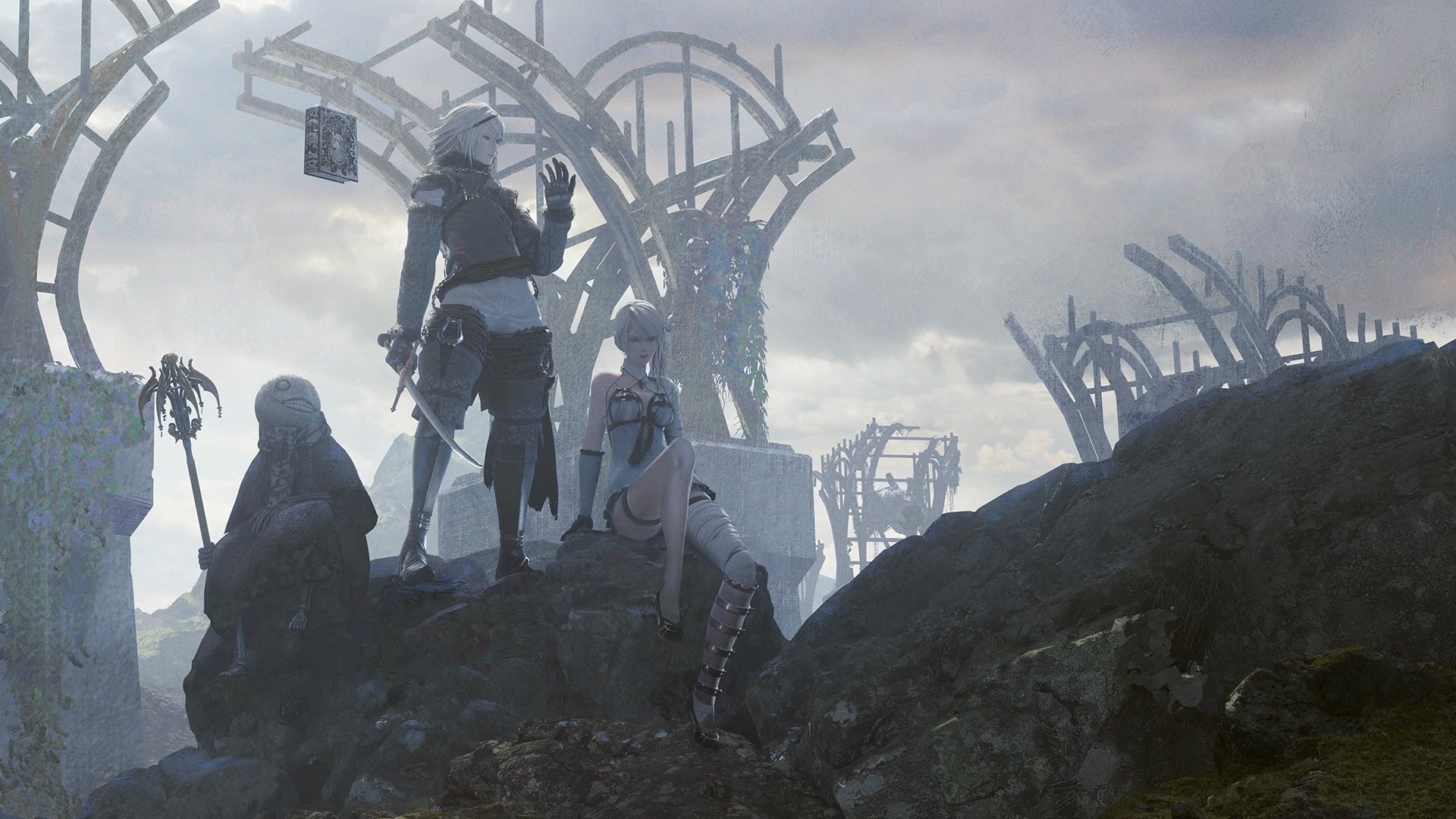 Author’s note: After writing the below review, but prior to publishing it, this writer learned that a trophy newly added to this version of the game makes an arguably transphobic/intersexphobic joke regarding a certain character in the game while asking players to engage in what I would describe as invasive and uncomfortable actions. This was picked up by TheGamer and can be read about here (spoilers within for those who haven’t played NieR). While I’ve elected not to alter my review score, I have made a note of this in the review breakdown and would urge Square Enix to revisit and alter this trophy where possible and better consider its ethics around this in the future.

NieR had to walk so that NieR Automata could run. That’s what I believe, anyway. Looking back at the critical and public reception for the former against the latter, the story is clear. With the original, Director Yoko Taro and team laid the important groundwork for the widely-revered follow-up, but did so in far more challenging conditions. Without the assistance of combat veterans Platinum to smooth out its gameplay, and launching at a time where brown/grey shooters were far more in favour than quirky Japanese fetch-em-ups, it didn’t enjoy the universal acclaim of its sequel. So does an updated version of the game, a Taro Cut if you will, brought to a modern standard for a community hungrier for diverse gaming experiences have a better chance? That’s the idea with NieR Replicant Ver.1.22474487139…

I won’t spend too much time on introducing NieR or its characters and narrative, I feel those are all things better experienced blind. If you loved Automata and never got around to the original you’ll no doubt enjoy what’s going on, and if you’ve never played either but dig quirky JRPG storytelling and can appreciate that a violent, sweary woman with giant swords is one of the best characters in video gaming it’s probably also for you. Fans of the original, even those of us that put in the time and effort to see each of its endings through, have a lot to be excited about in this new version of Replicant though. Billed as an update to the game versus a remaster (hence the title), it goes beyond simply gussying up the game’s visuals by restoring ‘cut’ content and rethinking core gameplay elements while substantially upping its production values.

Sweeping changes to the game’s look and feel are the most obvious, with combat in particular reaping the benefits. NieR’s combat was always serviceable but far from a highlight, something that was remedied when Platinum brought their combat expertise to Automata. Replicant’s update does a lot to make combat feel more immediate, responsive and intuitive, including adding a much needed lock-on function as well as giving players the ability to move and use magic at the same time. The heart of the game’s unique mix of hack-and-slash and bullet hell gameplay is still completely intact, just in a more fluid and manageable capacity. One trade-off is that it feels significantly easier, even on the Hard difficulty, though an Auto Battle option available exclusively to the Easy option is there should anyone less capable or familiar with action games want to experience the game for themselves.

Outside of combat, this is still largely the same NieR that it was in 2010, for better or worse depending on who you ask. For as fun as it is to be ‘in’ on Yoko Taro’s madcap design philosophies, there’s bound to be a point for a good chunk of people where it starts to get a bit much. Repetitive, confusing environments and inane fetch quests are an intentional hallmark, the punchline to a joke that Taro-san has made at our collective expense (and Square Enix’s, presumably). You’ll applaud the spins on ubiquitous video game concepts, like the way tutorials are found by looting crates and enemies but resent being asked to trek back and forth across the same two towns six times in one quest, even when the payoff in pennies dropped and dots connected makes up for it. There’s almost always a good reason for the tedious stuff – a tone to be set or a menagerie of friendly faces to be burned into memory to make an impending tragedy all the more terrible. The game’s first half, played as a younger Nier, is certainly the worst culprit. A tangible change of pace and a barrage of revelations makes the second half featuring a slightly older and more capable Nier a lot more palatable, which is good news once you realise you’ll need to replay that second half at least three times and then some to see the game’s true endings.

Something that’s sure to divide returning fans, but to my eye is largely an improvement, is a visual update that both enhances the quality of the game’s assets and effects and also revisits its character designs. At the risk of repeating myself, the aim here really does seem to be to bring Replicant and Automata closer together, with new character models that wouldn’t look a bit out of place in the latter. I get the feeling not everyone will be happy with the more stylised appearances, and I’m sure a small percentage of fans would’ve preferred the older, more gruff iteration of the main character to return, but I reckon it’s a job well done across the board.

However you wind up feeling about the character designs, the environments are unmistakably improved. Better geometry, better lighting, textures, draw distances – it’s night and day, and all presented in up to 4K60 depending on platform. Cutscene direction seems largely the same, albeit obviously featuring much nicer assets, though they seem to run at 30FPS even when the game is running at 60 which can be jarring. I also kinda wish there was a setting to switch off the semi-transparent bars at the top and bottom of the screen during canned sequences, I get that it’s a legacy thing but the option would’ve been nice.

The game’s music has also been revisited and completely redone, with new recordings and arrangements that, again, bring it closer to the standard set by Automata. The same memorable pieces are still present, just now richer and fuller. The updated score does risk losing a touch of the subtlety and nuance in places, so not everyone will be happy with all of it (I quite miss the robotic droning in ‘The Wretched Automatons’) but the grandeur of it all certainly helps elevate the overall presentation. You can also, if you like, swap the music out for a selection of tracks from Automata, which is a neat added bonus.

If you were a fan of the snide and slightly sassy British accent with which Liam O’Brien delivered Grimoire Weiss in the original version of the game, or the foul-mouthed and foul-tempered Kainé played by Laura Bailey you’ll no doubt be pleased to know that there’s even more of it this time around. The original script and voice work has been ever-so-slightly tweaked in places, but more importantly a bunch more has been recorded, lending fully-acted lines to pretty well every bit of written dialogue in the game. It’s a nice improvement overall, but the biggest boon is the greater sense of place afforded by the incidental bits of dialogue you’ll hear when walking around populated areas.

I’ve saved the truly special stuff for last though, and fair warning that the next paragraph might veer into ‘slight endgame spoiler’ territory. Aside from including the original game’s one bit of DLC, The World of Recycled Vessel (featuring an updated version of Dad NieR!), Replicant contains a substantial helping of brand-new content.

For starters there’s an entirely-new main quest that takes place in the second half of the game that definitely feels like it was cut from the original release for being a tad superfluous, but it’s a neat bit of extra story content nonetheless and culminates in some decent action. It’s nothing in comparison to a new chunk of endgame content though, which I can’t and won’t spoil here but should prove very exciting for fans of the series and certain characters in particular. It is, in a word, wild. We’ll have a post available here on WellPlayed going into more detail on what that entails a little later on, when we feel the world has had enough time to see it for themselves first.

NieR Replicant Ver.1.22474487139… successfully brings the cult classic to a more modern standard while filling out its gaps, strengthening its ties to Automata and giving Yoko Taro fans a tasty helping of new content to chew over. It’s still not for everyone, and its more aged components stand out for having aged further, but if you can find yourself in harmony with it it’s exhilarating. Like the original version it’s intelligent, surreal and subversive without pretense, and now ageing with significantly more grace thanks to a thoughtful and thorough update. 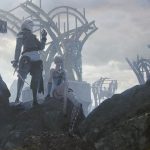 NieR Replicant Ver.1.22474487139… Review
So Weiss You'll Play It Twice (Or More)
It's probably not going to win over haters of the original, but for returning fans or those who jumped in at Automata this is a fantastic update to a cult classic game that also happens to bring with it some very exciting new surprises.
The Good
NieR's story is one worth revisiting
Improved combat is extremely welcome
New content adds context and fanservice
Huge uplift in production values
Kainé
The Bad
Repetitive nature isn't for everyone
New soundtrack doesn't always hit the same
Newly-added phobic trophy isn't cool
8.5
Get Around It

NieR Replicant Ver.1.22474487139… Review
So Weiss You'll Play It Twice (Or More)
It's probably not going to win over haters of the original, but for returning fans or those who jumped in at Automata this is a fantastic update to a cult classic game that also happens to bring with it some very exciting new surprises.
The Good
NieR's story is one worth revisiting
Improved combat is extremely welcome
New content adds context and fanservice
Huge uplift in production values
Kainé
The Bad
Repetitive nature isn't for everyone
New soundtrack doesn't always hit the same
Newly-added phobic trophy isn't cool
8.5
Get Around It
In this article:jrpg,kieron verbrugge,nier,Nier Gestalt,Nier Replicant,NieR Replicant ver.1.22474487139...,NieR: Automata,pc,pps4,review,Square Enix,wellplayed,Xbox One,Yoko Taro