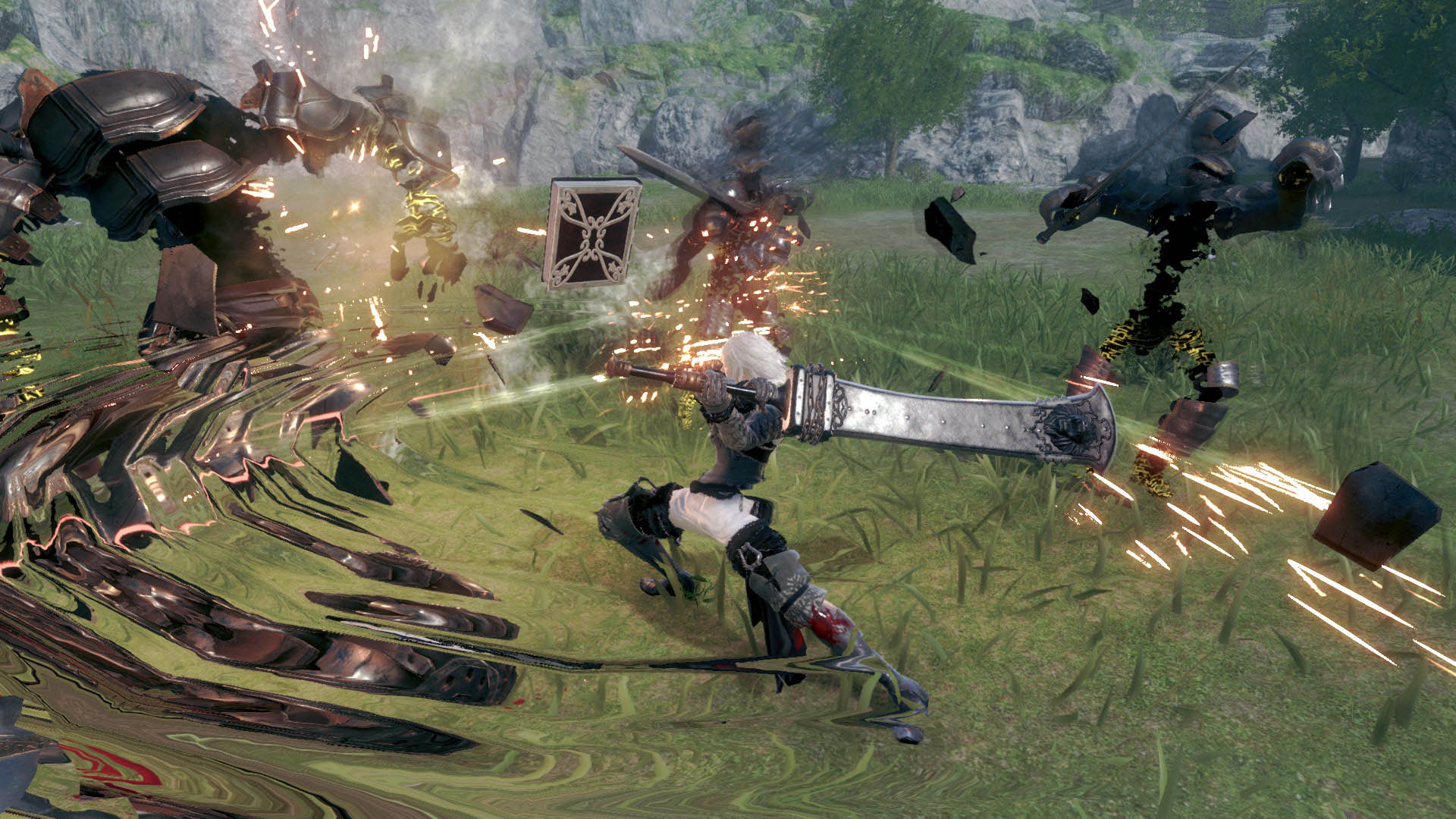 Thanks to our pals at Square Enix and Bandai Namco Australia, I’ve recently been able to get my hands on the upcoming re-release of the cult Yoko Taro-helmed action RPG NieR, with the ridiculously-titled NieR Replicant Ver.1.22474487139…

If you haven’t already, you can read my impressions of a handful of key sections of the game right here. As an addendum of sorts, though, I wanted to take the time to discuss one new feature in particular in the updated version of NieR that stood out to me as both a welcome carry-over from its sequel, NieR Automata, and another example of how video games desperately need to loosen the reins on difficulty options.

Full disclosure – I’m not great at action games. Shooters, hack-and-slash, whatever the genre if it requires quick thinking and reflexes I am absolutely not your guy. My pride will tell you it’s not so much a lack of skill as a lack of patience to nurture the skills needed, but the truth is probably closer to the former. I admire anyone with the ability to run through games like Demon’s Souls, or play Wolfenstein II: The New Colossus on ‘Mein Leben’ mode, or at least the fortitude to die a thousand deaths on the way there, but that ain’t me.

That said, I still enjoy being challenged in video games, and most of the time I find it just fine on Normal modes. At times, if I’m feeling saucy, I might just push things up toward Hard, but the problems there are usually a matter of bottlenecks. I might find a game tough on Hard, but doable, enough to keep me engaged and having a good time – but then comes along some insurmountable bullshit that forces me to drop back down. It’s a viable option, at least when the game in question allows mid-save difficulty changes, but boy does it sting the ol’ pride just a little.

That’s where an emerging trend in modern games to allow players to tweak difficulty settings beyond the rigidity of tiered levels feels like a gift. Games like The Last of Us Part II, which allows things like enemy skill, traversal complexity, on-screen assistance and even puzzle skipping to be altered agnostic of the overall chosen difficulty level. These kinds of options allow players who might only struggle with one or two concepts, especially when it comes to players with greater accessibility needs, to enjoy the game without the need to sacrifice challenge or pride by dropping the whole thing down to Easy.

That’s why NieR Replicant Ver.1.22474487139…’s newly-implemented options, while welcome, feel more patronising than helpful. Now, I’m probably using this game as a bit of a scapegoat in the greater discussion, but I started this modest piece with the simple goal of pointing out the added new options before deciding I had an Opinion™ on them as well.

Let’s start with the good: the game’s new Auto-Battle options are awesome, letting players who might not be into action games enjoy NieR Replicant’s unique world and narrative for what it is without being bogged down in its combat, not unlike similar options found in the 2017 sequel, NieR Automata. Players can toggle it on and off in the menus or at the press of a button, as well as change up specifically which areas of combat are automated, from attacks to magical abilities, defending and parrying and even item use.

In my time with the game I tried it out, running around the Northern Plains with the full gamut of weapon types and magical skills under my belt as Nier unleashed hell on the swarms of enemies around while I barely lifted a finger. It all works quite well, and I’m surprised at how much fun I had just watching old mate bounce around the screen, throwing (literal, magical) hands as I enjoyed seeing details and flourishes I’d usually miss while concentrating on my actions.

So with all that in mind, why am I not completely sold on it? It’s just one little detail that, in my humble opinion, undermines its entire inclusion: Auto-Battle is only available in the game’s Easy difficulty.

Yep, unlike those other modern examples, Nier’s bottleneck-loosening combat tweaks can only be applied should the player have already resigned themselves to rocketing through the game on the easiest mode of play. For some players, that might be just fine, but there are a couple of good reasons why this sucks for most. Firstly, as laid out above, wanting to eliminate specific pain points in a game’s mechanics and wanting to eliminate the vast majority of its challenge are not the same thing. There’s every chance that I’d rock the game on Hard mode if it meant I could turn auto-defence on, given that defend/parry timing is probably my biggest weakness and likely the only thing stopping me from ‘gitting gud’.

Second, and even more specific to this game, is that NieR Replicant holds the best loot RNG chances back for higher difficulties. Moving up from Easy, to Normal, to Hard increases players’ chances of finding rare materials – which are not only used for weapon upgrades but for a fair few of its side quests. If I was to attempt to enjoy the game with its Auto-Battle options in use, and therefore be playing on Easy, there are probably a fair few aspects of the game made ironically more difficult with the more anaemic material drops. So, bottom line is, you can’t easily have the game take care of one or two minor elements of combat for you and be challenged and be a completionist, and that’s a tad disappointing.

Again, as much as it sounds like I’m having a whinge, it’s definitely nice to see the option included now for those that want or need to take advantage of it in order to enjoy NieR Replicant Ver.1.22474487139…, and games that do difficulty with more nuance are still well in the minority, so this is by no means a targeted attack on what is shaping  up to be an excellent update/remaster/thing. If you’d like to read more about why I’m super keen to play more of the game, check out my hands-on preview here.