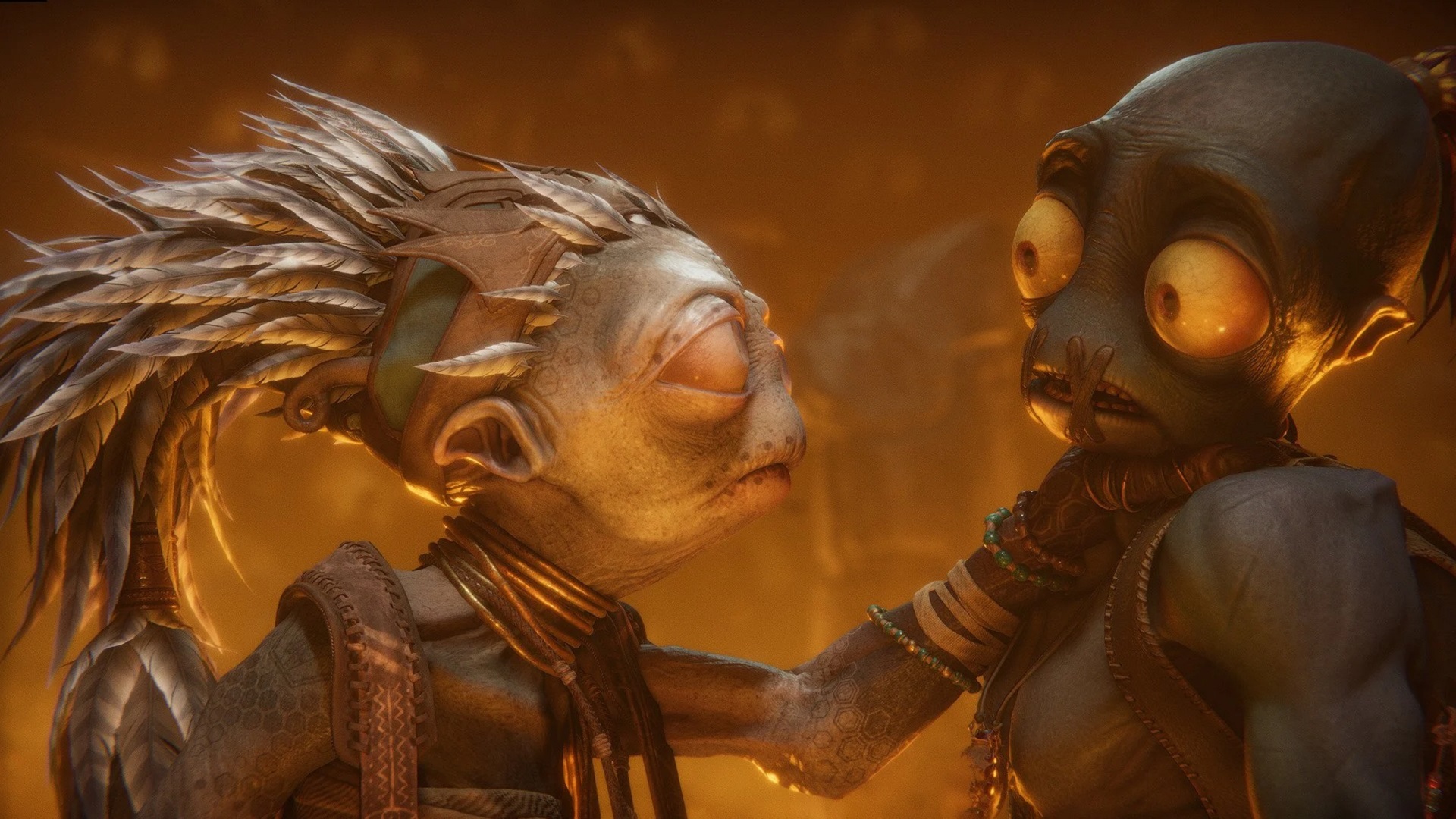 There’s a lot to dislike about Oddworld: Soulstorm. Its early stages are rocky, blending a lack of real player agency with a series of frustrating mechanics. A lot of the game still doesn’t work properly even after a series of post-launch patches. Its writing lacks consistency in its worst moments, and the environments in those initial levels are overly muted in style. But what Oddworld: Soulstorm does well, it excels in – for the most part.

Soulstorm is the original vision of 1998’s Oddworld: Abe’s Exoddus – its cramped development forced a series of compromises – from original developer Oddworld Inhabitants, continuing on after the story told in the series’ 1997 introduction Oddworld: Abe’s Oddysee. More specifically, it’s a sequel to 2014’s Oddworld: New ‘n’ Tasty which was itself a remake of Abe’s Oddysee. That was a bit and a half to get out of the way but, hey, I’m a student of history: we breathe context. But apart from shared locations and characters, Soulstorm is a tremendous upgrade of what was already the series’ best game.

Soulstorm carries over the dramatically updated “2.9D” gameplay formula from New ‘n’ Tasty, adding gameplay mechanics that feel like a natural progression. Existing ones are also improved in natural and satisfying ways. Soulstorm’s new crafting system was the one that drew the greatest ire from me in the leadup to the game’s release, though. I’ve never enjoyed a crafting system in a video game before: they pollute the games they inhabit with tedious gathering that interrupts their flow. Even before playing Soulstorm, I knew it would be the most controversial part of the game.

Soulstorm is absolutely guilty of the trappings of a system like this at times. Checkpoints are fairly generous most of the time but having to scour the same area’s lockers, bins and vending machines again after you spent two to five minutes draining them of their contents is one reason why most of my level playthroughs flirted with the hour-long mark. I spent nearly two hours on a handful of them!

And yet, I never found myself cursing the crafting system itself. Rather, it’s so wonderfully reserved in its number of recipes that how best to use the variety of items at the disposal of loveably depressed protagonist Abe was only crystal-clear in a minority of instances. The system grants player agency in a way that feels deserved. Because of the low number of craftable items, I never felt forced to beat a puzzle in a certain way. Now, I just wish it’d stop giving me steel hoses when I already have a flamethrower and a fire extinguisher. Just give me those items, damn it.

Where the system really shines is in Soulstorm’s more difficult challenges, like holding murderous Sligs at bay while your comrades climb their way to safety. I laid traps with what I had at the time, then made use of the rest to either cut off or destroy enemies. If that didn’t work, I simply tried something different. The beautiful thing, again, was that there was no right or wrong way to approach these challenges. Every victory felt like my own, and when I’d finally allowed not a single soul to perish on their way to freedom after countless checkpoint restarts? It felt really, really good…especially when my dedication to saving lives was rewarded with a gnarly ‘ending’ that gave me access to the game’s last two levels.

That said, unfortunately an aspect of the crafting system nagged at me: recipes rarely share ingredients. There’s very little reason not to craft, say, a can of soft drink fashioned into a stick bomb with the addition of chewing gum because the item is simply objectively better than the non-sticky soda bomb it originated from. If gum were to be used to make another completely different item, it’d force the player to craft what items they felt were best for the scenario and make do if they’d made the wrong choice. Despite these issues, the crafting system is a net positive that helps bring Soulstorm into the forefront of fun. I managed to get by in most situations without using items at all anyway, relying on my well-honed Oddworld instincts to complete the game on Normal difficulty.

Thankfully, this approach worked because Soulstorm is still an Oddworld game. The (odd)world that Abe inhabits still tickles every bone in my body. The awesome dieselpunk aesthetic from Abe’s Exoddus remains but this time Soulstorm’s incredibly handled camera angles – used to relatively little effect in New ‘n’ Tasty – grant the environments life that they’ve never known before. And even on my mid-tier PC, the game looked great and ran even better. Returning locales like the art deco wet dream that is FeeCo Depot make full use of Soulstorm’s inspired visual philosophy.

And yet, Soulstorm remains an Oddworld game in negative ways too. Returning to a 1990s style of 2D platforming in the vein of 1989’s Prince of Persia or 1992’s Flashback is a personal treat, but it is absolutely not for everyone. Soulstorm demands dedication. Again, it took me two hours to beat some levels and I still didn’t always rescue every slave. Soulstorm’s attitude to secrets is also remarkably retro in this way as well. My Oddworld training kicking in like a CIA sleeper agent hearing the word ‘Bluebird’, I searched every nook and cranny for secret entrances…to discover that they were either hiding in plain sight or deviously hidden. If you don’t like spending hours on a level only to not even 100% it, Soulstorm is not the game for you.

No review of Soulstorm would be complete without mentioning its state at launch. If I were to speculate, Soulstorm’s infamously unpolished launch version was due to the game’s late-announced PlayStation 5 port. Much work has been done in post-launch patches, but some issues seep through the cracks. The glitches I encountered that evaded patching were entirely related to gameplay, and rectifiable through restarting a checkpoint (unless you get caught in a death loop) or simply bashing my head against the controller until something gave. Fortunately, these instances proved few and far between and should prove less frequent with further patching.

Soulstorm’s is a brutal world almost devoid of hope, conveyed equally as well by its superb, subdued soundtrack and its well-directed pre-rendered cutscenes. But while the audio design is excellent bar the occasional stock sound effect, (mostly) uninspired cameos from influencer fans of the series and the mediocre sound mixing bring Soulstorm’s audio department from top tier to merely great. Cutscenes also ran at 30 frames per second on PC, which is wildly silly. Still, despite technical issues, hearing upgraded versions of familiar sounds such as the Sligs’ robotic greetings can’t help but make me smile a little bit.

In fact, there’s a lot that Soulstorm keeps from its predecessors. Its old-school difficulty level (another reason for those longer playthrough times), its emphasis on stealth akin to its inspirations, and the gameplay mechanics that made the series stand out. The ‘GameSpeak’ system may be unfortunately watered down, but it still sets Soulstorm apart from its platforming peers. Abe performing a chant that allows him to possess enemies remains one of the most genius mechanics in gaming, and it’s somehow even better in Soulstorm – more on that in a bit.

Soulstorm also stays true to the series’ unapologetically critical narrative by retaining its historical, political and mythological influences, this time in a more grounded approach. It’s revealed in passing, for example, that Mudokons have a worker’s union, but it remains unable to contend with the raw power of Glukkon industrial capital and the lethal power of the Brew. The only way out for Abe and his people is in open revolt, and it’s up to you to deliver it. You feel this sense of urgent dread in the later levels thanks to its dynamite set pieces, which are some of the best in the whole series.

But for all the triumphs of the later levels, the earlier ones carry a more failed posture. One level in particular, in which Abe must navigate the side of a mountain while unpredictable mortar fire rains upon him, would have turned me off of the game if I wasn’t so happy to have a new Oddworld game in my clammy piano-fingered hands. For every three steps forward in those early parts, your patience will take one step back. How big that step is will depend on your determination to get through it. Just like the good old days.

Indoor play centers are getting really brutal these days

Finally, smaller new details work to make Soulstorm a more fluid gameplay experience. Abe’s new double jump provides not only a new mechanic to master, but also a simple means to test where your friends can’t follow you. Chanting now takes the form of a movable orb that operates on a timer (not unlike 2001’s Oddworld: Munch’s Oddysee), which can be extended with followers. You can also now ‘jump’ from one possession to the next, dizzying the target instead of making them explode into juicy giblets. I can’t think of a more natural evolution of such an iconic ability, adding a degree of complexity that escalates it to a new level. Even better, it often takes a backseat to item experimentation which is (incoming cancelbait) a net positive to the gameplay flow.

I take no shame in declaring Oddworld: Soulstorm my game of the year so far and one of my favourite visual treats in my entire gaming ‘career’. While it flounders in its early levels, it picks up into a lightspeed pace by the fifth level or so. Its difficulty and older stylings of gameplay design will turn off some newcomers, but fans of the series will have a blast. Soulstorm takes what we know as an Oddworld game and thrusts it in a bold direction that lays the foundation for even greater heights. 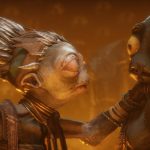 Oddworld: Soulstorm Review
Hello! *Hello!*
Oddworld: Soulstorm isn't without its issues, but the good far outweighs the bad. Its crafting system will prove controversial, but it is an overall boon to the game. A visual treat through and through that hits its stride after the first few levels.
The Good
A natural evolution of an iconic series
Crafting system a net positive despite flaws
Gorgeous in every way
Old school in both good...
The Bad
...and bad ways
Early levels are a slog
8

Oddworld: Soulstorm Review
Hello! *Hello!*
Oddworld: Soulstorm isn't without its issues, but the good far outweighs the bad. Its crafting system will prove controversial, but it is an overall boon to the game. A visual treat through and through that hits its stride after the first few levels.
The Good
A natural evolution of an iconic series
Crafting system a net positive despite flaws
Gorgeous in every way
Old school in both good...
The Bad
...and bad ways
Early levels are a slog
8
In this article:2021, 2D, Aza Hudson, oddworld, oddworld inhabitants, pc, platformer, review, soulstorm