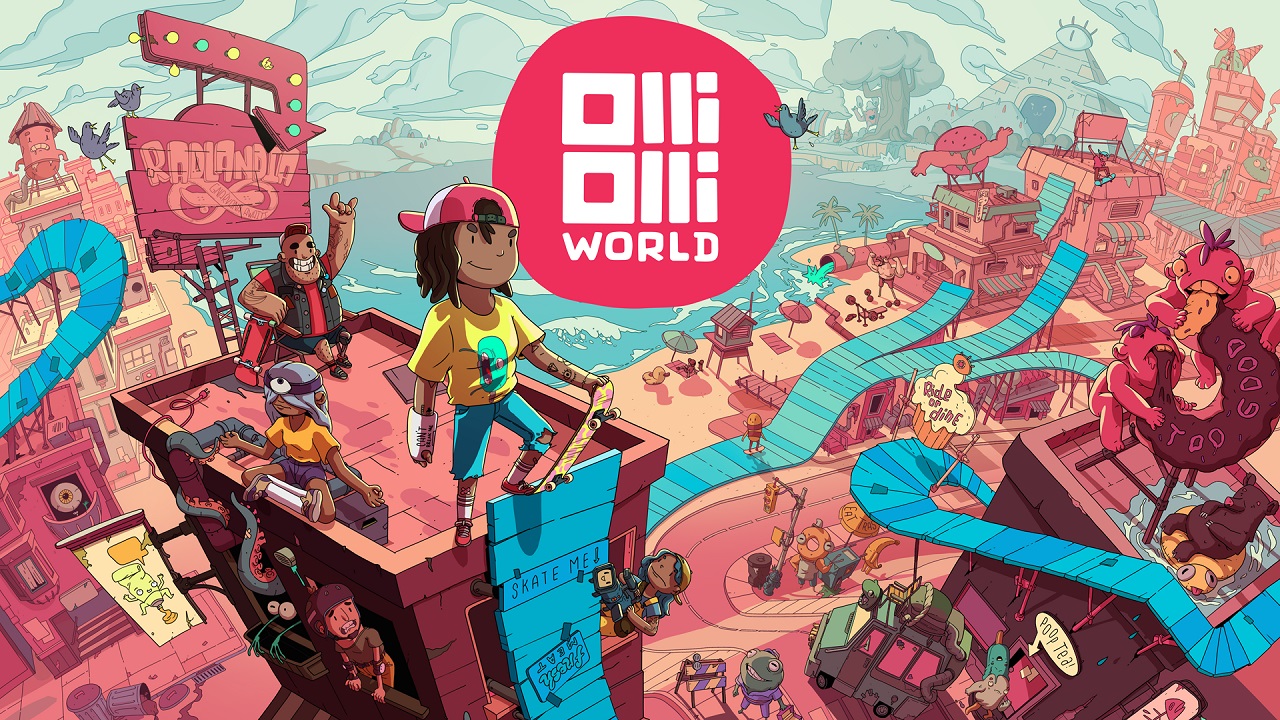 I’ve never touched a skateboard in my life, that much is true, but when it comes to skateboarding video games I can vert, ollie and grind my way across just about anything like nobody’s business. But besides the Tony Hawk’s Pro Skater franchise, very few skating games have reached the dizzying heights of success without falling headfirst into the dirt thanks to needlessly complex controls and a lack of original ideas. OlliOlli, however, succeeded where others bailed in establishing its own identity, combining 2D side-scrolling with controls that minimised the clutter factor for that perfect sweet spot. With a few years of development under their belt, Roll7 are almost ready to roll out a new take on their own concept with OlliOlli World, and our early hands-on can confirm it’s their boldest attempt yet.

OlliOlli World is distinct from previous entries in the series thanks to its completely wild visual overhaul. Gone are the 2D pixelated graphics that defined the original titles, replaced with the more vibrant cartoon world of Radlandia and its distinct biomes of adventure. Created by the mystical skate gods, your chosen character is tasked with venturing out into each area, learning the tricks of the trade as you head towards skating nirvana, or Gnarvana as the game calls it. It’s a bold change of pace for the series, but one that quickly establishes itself to be a good one if the first few hours of the game are anything to go by.

But first, let’s talk character customisation. As with the vibe of the world, your skater can come in all shapes, sizes and colours to clearly identify itself as your own avatar. Of all those I saw, no one person looked the same as the other, with an absolute ton of options to choose from. I settled on a full body suit full of yellows and oranges that just spoke to me, though after a few levels of beating high scores and quests, I had even more options available to me that could have taken a good hour of my time to go through.

Venturing out into the first region known as Sunshine Valley, you’ll get used to the general controls of jumping, pulling off kick flips and grinding rails, and it doesn’t take very long at all for the concept to click into gear. I’ll admit, the first few levels had me falling on my face more than once, but the more I played the easier it became as the concept of chaining tricks together became almost effortless. Most of the trick mechanics (such as pulling off ollies and flip tricks) are controlled by the left stick, with the right stick allowing you to grab the board in the air. Obviously it does get more elaborate the further you go in, but flicking the left stick from one grind rail to another feels incredibly natural.

There’s so much in the way of options for your look. So much!

The catch with OlliOlli World is combos. It’s all well and good landing one trick after another and getting to the end goal, but if you really want to climb up the high score charts you’re going to have to learn to combo everything together. It’s not unlike a fighting game in that sense, pulling the left stick at just the right time to divert from a rail into a manual along the ground, then back up onto another rail or a wallride. The crazier you get with rolling the left stick, the bigger the combo score per trick as the multiplier ticks up, though all it takes is one bad jump to send your skater into the great beyond.

I had the chance to explore but three of the biomes that will be shipped with the finished game, including the forest covered Cloverbrook and the rocky outskirts of Burntrock, but there’s a fair amount of content to each one. Most levels may only take a minute or two of your time, but each has branching paths, quests connected to collectibles and new areas that can be unlocked along the map. The further you go in, the faster and more complex each area becomes, with massive jumps and grind rails that seem to go on forever, the camera panning further and further out as you go. It’s a joy to watch in action, let alone play, especially when you find the right path and nail each trick one after the other.

There’s plenty to look forward to on the multiplayer front as well, with the included League and Portal modes. League has you competing for prizes (and bragging rights) against friends in a ranked mode of sorts, giving you the chance to skate down a predetermined track to set a score in the hopes it’ll be enough. Portal, meanwhile, allows you to generate your own track based on a few simple settings (such as difficulty and track length) which you can then share out to other players using Postcodes. It’s a clever idea, though without a dedicated track creation tool it seems a little too simple right now, but who knows what the future may bring.

From what I had seen of the game before my hands-on time, I had no doubts the visuals would complement the action, and I’m happy to say now that there’s absolutely no doubt. It’s a wonderful visual feast that I can’t wait to really delve deeper into, let alone check out the other areas Roll7 has in store both at launch and later on down the track. That will have to wait, though not too much longer now, as OlliOlli World hits just about every current platform on February 8, 2022.