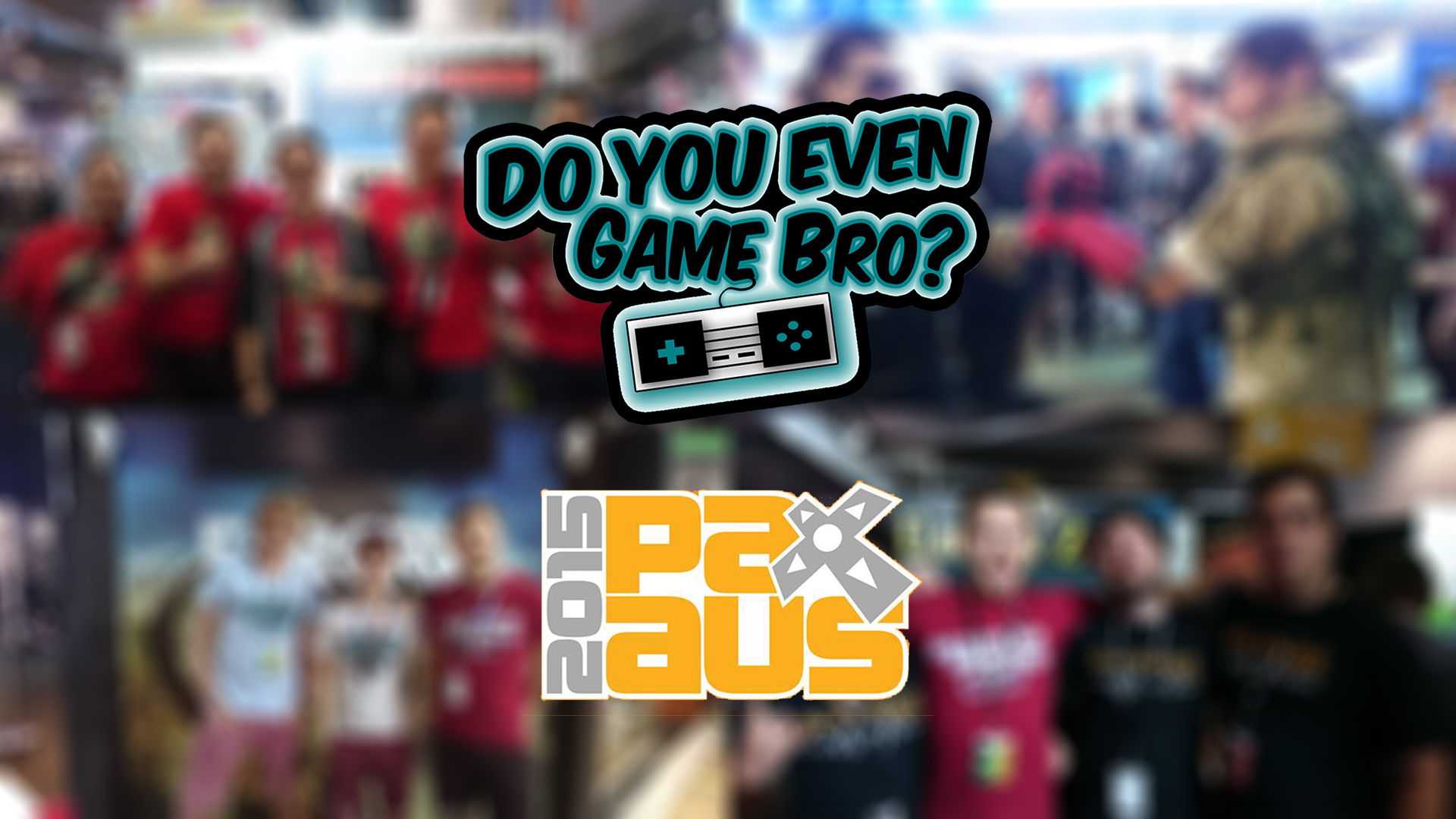 In the space of one month I have been to both the EB Expo in Sydney Australia, and PAX Australia in Melbourne. These represent my first experiences attending gaming conventions, and my take on the EB Expo was that it was about the big AAA games in a hands-on way. PAX is also about getting a hands-on with the games, but you also find out about the games and the people behind them and there’s a bit more of a spotlight on indie developers.

We (four intrepid Do You Even Game Bro? members) were only able to attend the opening day on Friday and we kicked it off by attending the behind closed doors Fallout 4 presentation, the same presentation that was later shown to punters over the weekend. Here we learned a little more about the shooting mechanics and the crafting and creation systems within the game. We were also privy to a short gameplay video that showed off the game’s badassery and its lighter side. Although nothing from this presentation was really new, it did manage to grease the wheels of the oncoming hype train that many people are waiting to catch.

Bethesda also showed a short Doom video, which was the highlight of the presentation. Doom is one of our most anticipated titles of 2016, and the video showcased the high-octane, fast-paced and brutal multiplayer running during its testing stage. The new iteration looks fucking badass and thanks to incredible sound setup within the booth we were all left reeling from the graphic takedowns and kills, as bones were crushed, heads were ripped in half and limbs were blown off from the good old double-barrel shotgun. A brief look at the Doom SnapMap feature was also shown and I can tell you that the guys here at DYEGB will be all over this. Bragging rights will not only go to those that wreak the most havoc, they will extend to those that can create the best maps.

From here we found ourselves mingling with the Indie Developers that had made the journey to Melbourne to show-off their labours of love. It was here that I discovered that I had taken AAA gaming for granted, and it was great to meet and hear the stories about how the indie games on show had come to fruition.

The first developer we spoke to was Toge Productions, an Indonesian company that had flown half of their team to show off their game Infectonator : Survivors (currently in Early Access on Steam). We spoke to CEO Kris Hadiputra and Lead Sound Engineer Andrew Jeremy and a couple other members of the humble Toge Productions team and learnt that Infectonator: Survivors is an 8-bit survival simulator with Real Time Strategy, Tower Defence and Management elements. The aim of the game is to lead a group of survivors through a zombie-infested world by using the resources you find throughout your journey.

The team at Toge have been working on the game for three years and have poured their collective life savings into making it come to life.They wish to add a ton of new features, none more ambitious than the ability to have a multiplayer experience. In order to achieve these goals, Infectonator: Survivors will soon have a Kickstarter campaign running where you can help Toge Productions fund their project. For a more in-depth look at our time with the team at Toge Productions, check out Dave’s interview with Kris below:

In keeping with the international theme, we caught up with Justin Amirkhani, Owner and Creative Director at Canadian studio Vagabond Dog, the studio behind Always Sometimes Monsters, and its follow-up Sometimes Always Monsters, which the team were at PAX to promote. The first thing I noticed about Justin was how well he spoke. His words were well articulated and you got the sense that he had a story tell. It was revealed that the original game, Always Sometimes Monsters, was loosely based off Amirkhani’s experience as a games journalist going to development studios across the United States and writing his articles that way.

Amirkhani’s games have a realistic approach to them. In a way they are real-life simulators, the means of survival are the same as real life. You need to make choices, and those choices will have either a negative or positive effect on your life. Whether those choices are about money or other necessities such as food and shelter depends on the situation, but the fact is without these items you won’t survive. Amikhani mentioned that several fans reached out and thanked him for indirectly steering and assisting them through tough times in their lives. He hopes that Sometimes Always Monsters has a similar effect on players. To learn more about the title, check out Dave’s interview with Justin below:

Another development team made the short trip across the Tasman from New Zealand to be at PAX 2015. Eyemobi were in attendance to show off their first-person horror game Phantasmal, which ran a Kickstarter in October and succeeded in securing $15k of funds from individual investors. We spoke with Lead Developer Joe Chang and Senior Developer Jeff Chilberto about the game and the process of developing for both Steam and Oculus Rift. Our main man Dave Sisson was able to take the Oculus Rift build for a spin and you can find out what exactly Phantasmal is and what Dave thought of it in the interview below:

While Dave was getting a hands-on I had a long chat to Jeff, who is a great bloke. Chilberto informed me that the newest dev kits for Oculus make porting the game from PC quite easy, and that so far they have had good feedback about the VR experience. He explained that being an indie developer working in a small team is a lot of fun and it can be very rewarding, however it can be very tiring, especially with a family to look after as well. It also doesn’t allow for much gaming on a personal level. But it is a sacrifice that Jeff is willing to make in order to create the best experience possible. If you wish to play Phantasmal now, you can as the game is in Early Access stage on Steam.

One game I did get to play was Death Squared, developed by SMG Studio. It is a puzzler that can be one, two or four player. The aim of the game is to work together and move your specific colours blocks to its corresponding circle. Impeding your way are transparent blocks that push the other blocks (red can go through red blocks, but not blue blocks and vice-versa) off the map and other obstacles. Dave and myself managed to beat the co-op challenge in a little over seven minutes, not the five minutes required to win a prize. Dead Squared releases in 2016 and will be on consoles and Steam and will be one to keep an eye on. I can see it becoming a fun drinking game around DYEGB HQ.

The only other title that I got a proper hands-on with was a game by Bandit-1 called Tear Through. This title was a co-op, tactical topdown shooter, in the same vain as Hotline Miami. The level was entirely destructible and the aim was to arrest the enemies and collect evidence within the house. The player’s icon was not a human, but a dot that contained an image of the equipped weapon. It was definitely an interesting experience and a game that I would recommend fans of Hotline Miami to check out.

We also had the pleasure of meeting some exceptionally talented local developers including the cool cats at Brainwave Studios, who had their twin-stick shooter Danger Zone playable at PAX. We got to chat to Ryan, Eric, Josh and Anthony about the title, who explained that the game had only been in development for two months! To have a game playable and of the quality they had is a fantastic achievement. For those that didn’t attend PAX, Danger Zone is a twin-stick, 4v4 spacecraft shooter where the whole point is to either blow your opponent up or knock them off an asteroid, which slowly shrinks in size as the battle progresses. The game shows great potential as a fun couch co-op experience if it comes to Xbox One as they hope it will. The team from Brainwave along with a couple other dev teams at PAX are part of the AIE Incubator program, which provides support to upcoming local digital developers. To check out the program click here. For more on Danger Zone check out Dave’s interview with Josh and Anthony below:

The Northern Sydney Institute of TAFE had students showing off the skills they had acquired with their game, Kaiju Rising. The title which had only been in development for a couple months highlighted the potential we have within Australia when it comes to developing games. Kaiju Rising saw you take control of a giant monster, better known as a Kaiju, and destroy buildings in your surroundings to level up and collect points. But you weren’t alone, there were other user-controlled Kaiju roaming the environment and you could battle one another. The Kaiju with the highest amount of points at the end of the round was the winner. Watch Dave interview the students responsible for Kaiju Rising below:

Possibly the highlight of PAX for me was the opportunity we got to chat with the Australian Classification Board (ACB). While we weren’t able to conduct an interview the two representatives had a wealth of knowledge and were more than happy to answer (within limits) the questions we threw at them. It helped alleviate some of the misconceptions I had about the ACB. One of the questions we asked them was, do any of Australia’s policies influence the ratings process? The example I gave them was that what if a game that was seeking classification had scenes involving same-sex marriage. We as a Government have yet to legalise same-sex marriage, therefore would the ratings board deem this as inappropriate themes and seek the removal of such content? Thankfully the ratings board aren’t as moronic as some politicians, as this would not influence their rating decision. The main themes that are frowned upon are sexual violence and drug use. We asked several other questions that received interesting responses. As we have requested an official interview, we won’t go into detail here. I will say that the ratings board cop a hard wrap for doing a relatively good job. Sure games get banned from time to time, but we’re lucky we aren’t in some other countries that have much stricter censorship laws.

In closing, PAX (Friday) was a cracking day and we met a ton of great people and some amazingly talented developers. It served as a reminder that AAA gaming isn’t the only gaming out there. There are a wealth of talented developers both in our own backyard and globally, and they deserve our support as much as the big shot developers so get around them. Did you hit up PAX this year? Let us know your experiences at the convention.