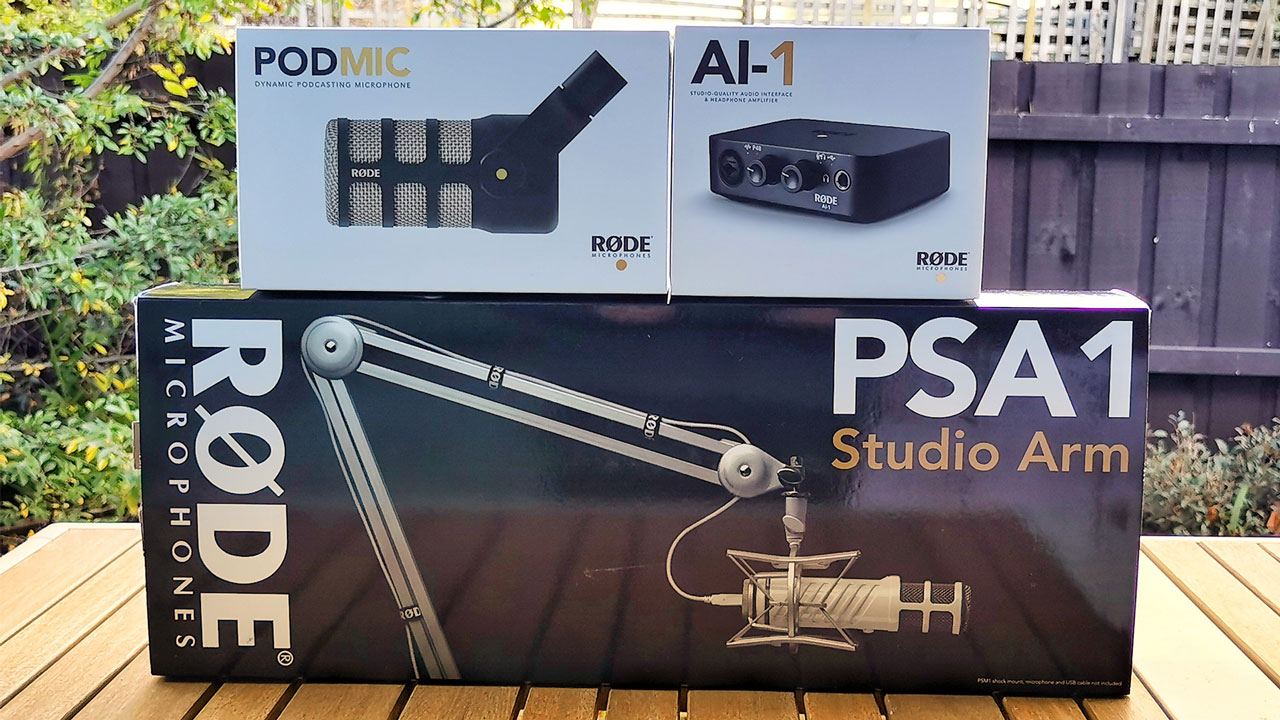 As someone who spent time studying audio engineering earlier in life, RØDE is a brand with proven quality in audio recording. In the mid-late 2000s podcasting began to boom, and the Australian-based brand entered the market and has been a key player ever since. But it’s not just podcasting where RØDE has made its presence felt, with content creation such as streaming or YouTube another avenue for the company to expand and offer its products.

Over the past couple of months I’ve been using a trinity of RØDE products for the WellPlayed DLC Podcast and our Made In Australia Podcast: the PodMic dynamic broadcasting microphone, the A1 single-channel audio mixer, and the PSA1 studio mic arm. As well as those three products, I got a pair of RØDE NTH-100 headphones a little over a month ago to make it a foursome – but is it an awesome foursome?

The PodMic and mic arm in action

The microphone is easily the most important part of any podcasting setup. You could have the best podcast, but if it sounds like it was recorded in the middle of a tornado, no one will listen. The PodMic is a dynamic cardioid microphone, meaning it focuses on picking up audio coming from in front of the mic. It’s great for podcasting as it limits the intake of sound coming from behind the mic, so if you are recording in an environment with multiple people it won’t pick up as much background noise as an omnidirectional mic would.

Looks are an important part of any product design, and the RØDE PodMic looks professional and like a quality piece of equipment. The main body of the mic is made up of a silver metal mesh design with a black metal casing, and on the back you’ll find a female XLR port to plug the mic into a mixer (cable not included). The mic comes attached to a shock mount that allows the user to connect it to an arm and rotate it to a position that suits your setup while mitigating vibrations. The PodMic looks also has a good weight to it (937 grams) and feels like a quality product. Honestly, it feels like it would survive a nuclear blast alongside the cockroaches. I mean there’s just something about a product that feels good that instils a certain level of confidence.

So, it looks good and feels good, but how does it perform? I’d be lying if I said the PodMic provided significantly better audio than my previous mic, but it has become my primary podcasting mic, so it’s doing something right. Recordings sound clean and clear and require very little editing post-recording in terms of polishing up the file. While RØDE threw in a pop filter, I never actually needed to use it, with the PodMic’s internal pop filter doing a fine job of eliminating my plosives.

If you are suffering from poor audio quality or are simply in the market for a new microphone, the PodMic is a great option that will deliver clear and crisp audio for an affordable price of roughly $149. The downside is that the PodMic does need a stand or arm, and the XLR connection does require a mixer to use it, which means another purchase. It’s not quite as straightforward as a USB plug-and-play mic, so some might not want to go the whole hog.

It records as good as it looks

The AI-1 channel mixer is a neat little unit powered by USB-C that lets users control levels for both headphones and microphone. On the front you’ll find one female Neutrik combo port for a three-pin XLR microphone or a 6.35mm port for instruments such as an electric guitar if you want to record music, a 6.35mm female jack for the headphones and two level control dials. On the back you”ll find the USB-C port and stereo audio ports (6.5mm) for connecting speakers. Measuring 125mm(W)x900mm(D)x35mm(H), it doesn’t take up a lot of real estate on the desk, and its black cast aluminium design (which includes a RØDE embossing on the top) is simple but stylish.

Technically, the AI-1 is powered by one preamp and supports 24-bit depth and sample rates from 44.1kHz up to 96kHZ, and will deliver up to 64dB of sound. It also features 48v phantom power should you wish to use a condenser microphone, which can be enabled by pushing the left dial. Users can also enable direct monitoring by pushing the right dial. It’s compatible with Windows 7 and later, as well as Mac OS 10.10 or later. It’ll set you back around $179, but if you’re looking for a simple mixer for home recording, whether it be podcasting or music recording, the AI-1 is a great option without going overboard.

The only complaint I have is that there is no quick mute function like on other podcast mics I have used. Instead, you’ll have to turn the input level dial down every time you want to mute your recording. Programs like Discord and streaming software will have their own mute function, but as someone who podcasts via Discord but records using Audacity, a quick mute function is a handy feature.

Completing the podcast bundle is the mic arm, and if you’re like me and a bit of a tight arse from time to time, you’ve likely gone the cheap route when it comes to a mic arm. I thought I could get away with a cheapie from Amazon (about $20), however it broke before I could even use it once. The PSA1 arm has provided the opposite experience and has been a great addition to my podcasting setup. Previously I just sat my old mic on my desk and off I went, but having an arm makes things so much easier.

With an all-black design, the PSA1 comes with two desk mounting options: a desk clamp and a desk insert. The arm can sit inside the desk clamp for easy insertion and removal or you can drill a hole in your desk and use the desk insert should you wish. On the end of the arm you’ll find the screw that will connect the arm to a microphone (such as the PodMic), and setting it up from scratch only takes about a couple of minutes (including attaching the mic), so points to RØDE for making it as easy as possible.

The PSA1 has a total reach of 820mm horizontally and 840mm vertically, as well as 360-degree rotation, offering users great flexibility with how their set up looks. It’s always super quiet too, with no squeaks occurring during use. The only knock on it would be that the little bar you use to tighten the desk clamp with is a little weak and does bend (maybe I had too many Weetbix that day).

Although it’s priced at $179, which sounds like a lot of coin for a mic arm considering the PodMic is $149, it’s worth spending the money on something that is built to last. When I bought my initial arm I questioned how much difference there could be between a cheap arm and a pricier one. Turns out, the gulf in quality is greater than I expected and I’ve certainly learnt my lesson – I’ll never go that cheap again when trying to save money.

The PSA1 clamp can handle a thick desk

Buying any tech equipment is an investment, and with any investment you want your money spent on something that is going to last. I’ve used the word quality a lot in this review, but as Arnott’s says, “There is no substitute for quality,” and that’s the case here. RØDE is a proven brand when it comes to audio products, and their podcast offerings are a great choice for anyone looking at affordable and quality options (although collectively they might stretch the bank account).

Review units supplied by the manufacturer 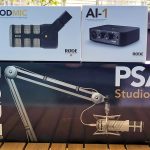 RØDE PodMic, AI-1, And PSA1 Review
RØDE To Success
With more people diving into the world of podcasting or content creation, RØDE’s PodMic, AI-1 audio interface and PSA1 mic arm can help get your project off the ground or take it to the next level.
The Good
The PodMic looks great and records clean and clear audio
Built-in pop filter on the PodMic works a treat
The AI-1 is a versatile and simple audio interface
The PSA1 is an excellent mic arm that is easy to set up and offers great flexibility
The Bad
XLR connectivity might deter some
No mute button on AI-1
Collectively the cost can be a little high

RØDE PodMic, AI-1, And PSA1 Review
RØDE To Success
With more people diving into the world of podcasting or content creation, RØDE’s PodMic, AI-1 audio interface and PSA1 mic arm can help get your project off the ground or take it to the next level.
The Good
The PodMic looks great and records clean and clear audio
Built-in pop filter on the PodMic works a treat
The AI-1 is a versatile and simple audio interface
The PSA1 is an excellent mic arm that is easy to set up and offers great flexibility
The Bad
XLR connectivity might deter some
No mute button on AI-1
Collectively the cost can be a little high
In this article:AI-1, content creation, microphone arm, podcast, podmic, PSA1, RØDE