Way back in 2010, I found myself enamoured by a little indie by the name of the Limbo, an atmospheric puzzle-platformer that I still cite today as one of the biggest inspirations for me wanting to make video games. More than a decade on from that fateful experience, I find myself playing Silt, a game that I could lazily summarise as “like Limbo, but underwater.” While it feels reductive to say, I think it’s actually an apt comparison, as developer Spiral Circus’s debut title is evocative of Playdead’s indie masterpiece, although it doesn’t have quite the impact.

Silt places you in the wetsuit of an unnamed diver, who awakens helplessly shackled amongst the depths of the ocean. As the diver, your goal is to power up a mysterious structure known as the Great Machine. To do so, you must claim the eyes of the four Goliaths that reside at the bottom of Silt’s monochromatic abyss.

The Great Machine and its power is Silt’s greatest mystery

When it comes to the story of Silt, this is about as much as you are outwardly told, as there isn’t any dialogue to clue you in on what exactly is happening, leaving you to make you what you will of the sights and surrounds of the deep sea. While I was fascinated by its surreal nature, I do wish it wasn’t as vague throughout. Akin to Limbo, I expect there to be many theories and interpretations of Silt’s world and the story it’s trying to tell, but a little more overt narrative wouldn’t have gone astray

The story may be lacking, but Silt is undeniably atmospheric, providing an underwater world that is both unnerving and unforgiving. The game does have a soundtrack, however its tracks are used sparingly, leaving you often just listening to the aquatic ambience of the ocean and the sounds of the creatures that inhabit it. This decision feels deliberate, making it clear that you’re alone at the bottom of the ocean, and no one can hear you scream.

Pleasing to the eye are the hand-drawn visuals crafted by Mr Mead, an artist who specialises in surrealist drawings with a monochrome coat of paint. The world of Silt often looks overgrown and out of control, with a vast array of aquatic plants filling out the deep abyss. While the ocean floor is expectedly messy, Silt’s black and white visual style succeeds in making everything visually striking .

As you can expect, the creatures that reside at the bottom of the sea aren’t to be messed with, especially as a fragile diver. In order to progress through an abyss full of creatures that’ll happily eat you with no regard, you’ll need to make use of your unique ability to possess creatures. This mechanic is introduced from the get-go and is used liberally over Silt’s roughly four-hour adventure, being a core mechanic you will use to solve various puzzles and get ever so closer to powering the Great Machine. Piranhas for example can use their teeth to not only snack on other surrounding creatures (including the diver if you’re morbidly curious), but also chains and wires that otherwise obstruct the diver’s progress. Small fish on the other hand can be used to get through tight spaces, and can also be coated in poison and used to kill other creatures. The hammerhead shark type creature called the Blockhead can be used as a battering ram to smash through breakable walls, while the stingrays grant you a nifty teleporting dash that you can use to warp between walls.

There are various other creatures to possess, each with their own unique abilities, and it’s up to you and your puzzle-solving acumen to find the best ways to utilise them. Some puzzles require you to chain possessions, jumping from one creature to another to carve out a path for the diver. Solving puzzles and leading the diver to the end of a chapter will culminate in a boss fight with a Goliath, which in themselves are also essentially puzzles that see you having to think of how to use the creatures at your disposal to defeat them. It’s a mechanic that I found to be particularly enjoyable, and thankfully the introduction of more than eight possessable creatures across five chapters helps to ensure that things don’t get stale.

Even though I had a decent time with Silt, the experience still has some shortcomings. In the moments when you return to the Great Machine to place the power of a fallen Goliath into it, the game kind of expects for you to just know what way you need to go, as it doesn’t provide decent enough signposting to indicate which way you should be swimming. It’s not a huge issue and the game does indicate that you’re going the wrong way eventually by darkening the screen, but it’s just an annoying instance that happens more than it needs to. Being underwater also makes movement a little slow, which is fine and to be expected for the most part, but it does still get tiresome in moments, especially when you get lost or die and need to retrace your steps (or whatever the underwater equivalent of steps are).

“Sorry mate, I need to borrow your eye”

The possession mechanics are fun and all, but I can’t help but feel that Silt doesn’t do enough to set itself apart from other games that already exist in the puzzle adventure genre. For a game that has been referred to as an underwater exploration game, there is shockingly little to explore and find, with only a few collectible divers to hunt down. I found myself bashing my head into the walls of every nook and cranny hoping to find something interesting, only to more often than not find nothing at all, and I can’t help but feel like an opportunity was missed here in regard to exploration.

Silt is an enjoyable puzzle adventure game, but it doesn’t really do much that the genre hasn’t seen before. The ability to possess creatures and use their unique abilities to solve puzzles is decent fun and does force you to think in some instances, but the lack of a coherent narrative paired with a slight lack of originality in its gameplay sees it fail to be as memorable as the games that appear to have inspired it. If you’re keen on a Limbo-esque experience that you can see through in a handful of hours, Silt is still worth a try, but the stark reality it faces is that there are so many games like it that do things better. 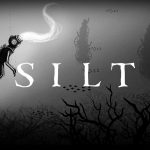 Silt Review
Like Limbo, but underwater (and a tad less memorable…)
Silt feels reminiscent of iconic puzzle adventures like Limbo and INSIDE, but its lack of originality and story see it fail to be as memorable.
The Good
Handcrafted visuals
Strong atmosphere
Enjoyable possession mechanics
The Bad
Story is basically non-existent
Lacks originality
Easy to get lost
7
Good

Silt Review
Like Limbo, but underwater (and a tad less memorable…)
Silt feels reminiscent of iconic puzzle adventures like Limbo and INSIDE, but its lack of originality and story see it fail to be as memorable.
The Good
Handcrafted visuals
Strong atmosphere
Enjoyable possession mechanics
The Bad
Story is basically non-existent
Lacks originality
Easy to get lost
7
Good
In this article:Dylan Blereau, indie, inside, limbo, monochrome, pc, ps4, PS5, puzzle adventure, Silt, spooky, switch, xbox