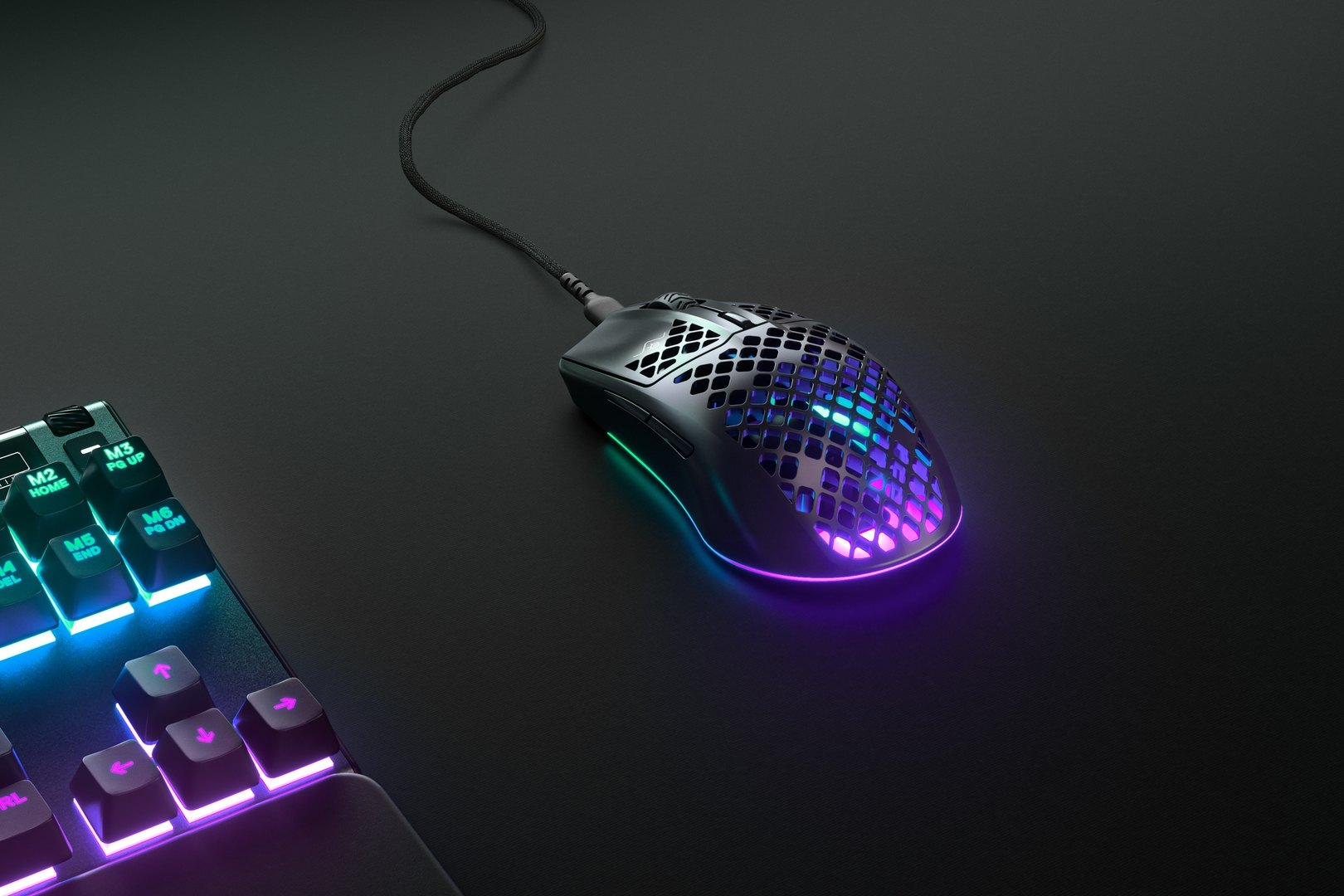 As someone who’s spent a good 25 years gaming almost exclusively on console, I can’t say that I’ve ever once cared about the mouse that I use on my PC. In recent months though, I’ve taken the plunge and built myself a modest ‘gaming’ desktop that I could use to assimilate into the PC master race, not unlike Assassin’s Creed Valhalla’s Eivor – a rough-hewn Viking attempting to blend into a land of sophistication. When planning my setup, I spent countless hours researching and deciding on the various components of my PC to get the best bang for my (modest) buck. But you know what I spent almost zero time researching?

Yes, until this last weekend in which I was lucky enough to be handed SteelSeries’ new Aerox 3 ultra-lightweight gaming mouse to review, I was using entirely the wrong gear. To my credit, it was a half-decent, name-brand gaming mouse that fit in wonderfully with my desk aesthetic, but I know now that it just wasn’t doing the job.

You need only be a curious onlooker to see that ultra-lightweight mice have been in higher demand among the PC gaming community in recent years, particularly in the esports scene. There’s a good reason for that – a lighter mouse means it’s easier to make large, quick motions with high accuracy, which is typically a big boon for FPS players and those using lower DPI sensitivities. The competition is getting fierce too, with ultra-lightweight mouse designs quickly morphing from simply tuning the weight and design of internal components to the trypophobia-inducing honeycomb designs that exist now. The latter works by cutting out as much excess, heavy plastic as possible by… well, literally cutting it out.

A mouse full of holes might seem like a terrible idea, and in some ways it could be, but the Aerox 3 range sidesteps a lot of those problems with some clever engineering. The thing that surprised me the most was the IP54 rating for water and dust resistance – because not all holes are supposed to be wet. I’m obviously not planning to go spilling anything on any mouse, holes or no, but as someone whose cat loves to sleep on their desk knowing that dust or debris getting inside shouldn’t be an issue takes a big fear factor out of the design for me.

There’s also the matter of how it looks. I’ll admit, seeing the honeycomb-style design in other mice I’ve never been a fan. It’s not the most pleasing aesthetic to work with but SteelSeries has had a decent crack, and I’m actually pleasantly surprised by how quickly it’s grown on me. The interior RGB lighting adds some much-needed flair to the ‘hole-y’ portion of the body, and comes through nicely without being overbearing, and the subtle strip around the base is a nice touch. I’m keen to see where SteelSeries takes this design in the future (a white option would definitely suit my setup a little better), but for now I’d go out on a limb and say the Aerox 3 is the nicest-looking take I’ve seen thus far.

Now I’m no esports pro, far from it, so when it comes to performance there’s definitely a ceiling where it just stops mattering to me. That said, the Aerox 3 definitely meets that ceiling where my previous gaming mouse didn’t. I’ve actually noticed it more in editing software like Premiere and Photoshop more than games, where the mouse’s custom TrueMove Core sensor combined with its ridiculously-light 57g weight has been making precise movements a breeze. The mouse’s big brother, the Aerox 3 Wireless, has an even better version of the sensor, rated at 200–18,000 CPI compared to the wired mouse’s 200–8,500, so if you are an esports pro (or aspiring pro) I’d say that’s worth the extra 9g fat on the Wireless.

It’s also just a bloody dream to use, gliding effortlessly across my mousepad and any other surface I’ve whipped it out on. And while I’m sure quite a few punters are going to opt for the Aerox 3 Wireless (which boasts up to 200 hours battery life) for true freedom, the detachable super mesh USB-C cable is legitimately life-changing. It’s super soft, super flexible and has zero drag, which is a trait that I’m sure my conservative family wish that I shared with it. It’s another surprising win for the Aerox 3 in a productivity use case, with the smooth skating and aforementioned cable plus the diminutive weight resulting in far less hand or arm fatigue than I’d normally get from using a mouse all day, giving my arm much more reserve energy for winding down after work.

Whether you shoot videos or shoot friends, whether you like to smash boxes in Minecraft or Excel, there are a lot of compelling reasons to give an ultra-lightweight mouse a go, and I reckon SteelSeries has one of the best. The Aerox 3 has opened my eyes in a bigger way than the first time I saw Jim Hawkins in Treasure Planet. If you’re looking for a wireless solution the more expensive and souped-up Aerox 3 Wireless is a no-brainer, but at A$119 RRP, the wired alternative is an absolute bloody ripper.

+ Super light, ridiculously light
+ RGB lighting is nicely implemented
+ Performs superbly for its price point
+ IP54 rating is mighty impressive given the design
+ Super mesh USB-C cable is so nice I want to use it for other things