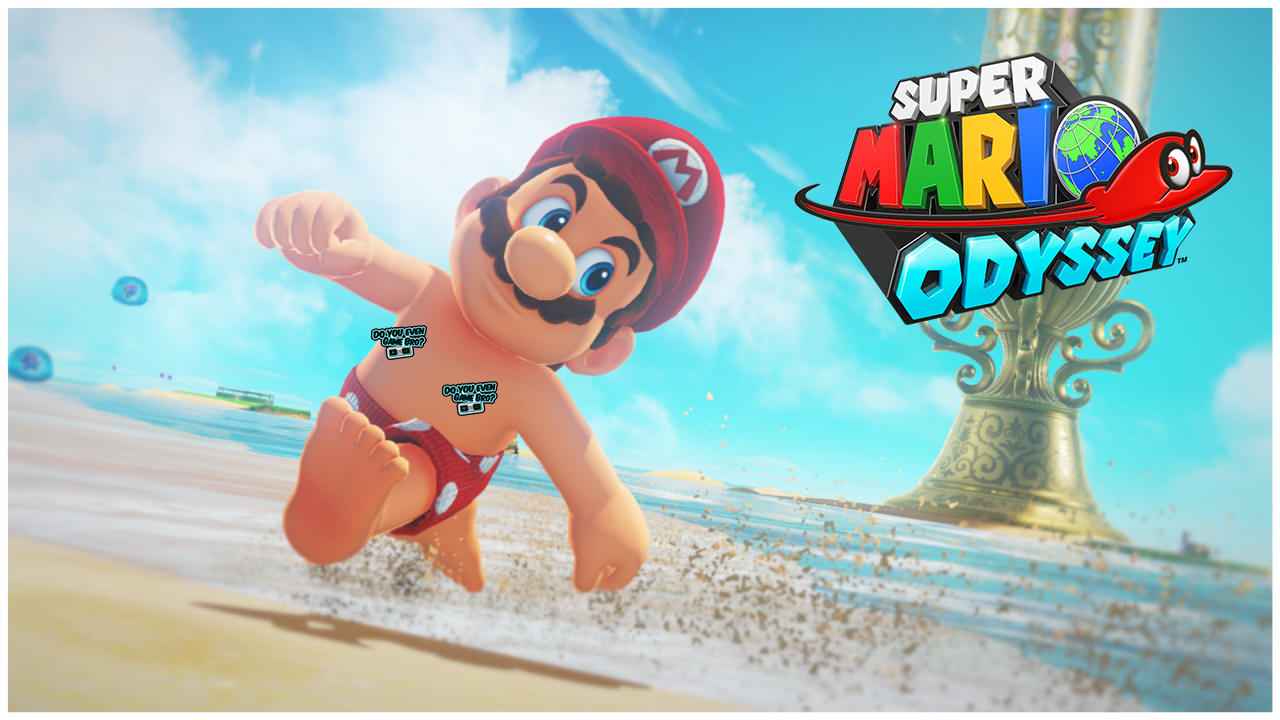 I’ve been following Super Mario Odyssey closely since the announcement last year, and have had hands on with some short demos in the past, and I think it’s fair to say that it sits firmly at the top of my most anticipated games still to come in 2017. So when Nintendo extended an invite to their Melbourne headquarters earlier this week to play an extended demo of three of the more newly revealed worlds – you can bet I was on the case!

The first thing made very clear to me upon sitting down in front of the demo setup, was that Nintendo really want people to play Super Mario Odyssey with the split Joy-Con set-up (that is to say, one Joy-Con in each hand). The reason for this is that, while perfectly playable with the Joy-Con grip, Pro controller or handheld configuration, the nuances of gameplay really come through when motion control is in the picture. I balked at the idea to begin with, I couldn’t comprehend opting out of using my Pro controller, the comfiest damn pad known to man, but merely ten minutes into the beginning of the game and I was converted.

So… does Cappy possess Mario, too?

Super Mario Odyssey begins in Bonneton, the Cap Kingdom, and it was here that I started my hands-on with the game. It’s a surprisingly bleak-feeling opening to a Mario title, with an almost complete lack of colour, and more than a little Tim Burton flavour in both visual design and accompanying music. This first world is a relatively brief jaunt with little in the way of thrills, but it’s an effective tutorial and it shows from the get-go that Nintendo are ready to shake things up with this game and put Mario in all kinds of new situations. It’s in this world that Mario first discovers Cappy’s ability to help him ‘capture’ (read: possess) other beings, in a sequence that had me taken aback at its unnerving weirdness one moment, and then chuckling the next. It was also here that I learned to love the Joy-Cons. Despite being perfectly playable with regular button presses, motion controls add a lot to Super Mario Odyssey. Using a flick of the wrist to throw Cappy affords a small amount of directional control for example, and subsequently continuing to shake the Joy-Con after the throw causes him to home in on enemies and objects on his way back to Mario, which isn’t possible in any other controller configuration. The impacts on gameplay are small (not so much as to put people at a disadvantage for using other methods), but it all goes a long way to justifying Nintendo’s commitment to cramming all of that tech into those tiny controllers.

It was a dark and froggy night (sorry)

Next up (in no particular order) was Mount Volbono in the Luncheon Kingdom, a stark contrast to the Cap Kingdom with its super bright, almost abstract colour palette and lively populace of adorable talking cutlery. It was in this world that I had one of many brilliant realisations – Mario can capture and control pretty much all the series’ history of staple bad guys – oh, how the toads have turned. In the Luncheon Kingdom, traversing the landscape often means taking control of a Podoboo (the fireball guys that jump up out of lava) to float safely through the hot, pink soup that covers the level. Towards the conclusion, Mario crosses paths with a couple of Hammer Bros, who can be captured as soon as they’re knocked out with a swift throw of Cappy. Controlling a Hammer Bro is a blast, bouncing around the place and throwing hammers at a startling pace. The Luncheon Kingdom is full of pitfalls and daring leaps around the aforementioned burning pink liquid, and with the added anxiety of being watched intently by the Nintendo representative guiding my play session, it’s safe to say I bunged up on more than a couple of occasions. In a twist that seems to be a running theme throughout the worlds revealed so far though, more often than not failing a jump or missing the mark can lead to discovering secrets that would have otherwise gone unnoticed. The Luncheon Kingdom is a fairly linear-feeling world compared to some others, but still manages to have a trove of hidden surprises stuffed into every corner. Thanks to Nintendo’s design expertise, a combination of visual cues and a commitment to consistency in game logic meant that I was deftly discovering all manner of well hidden goodies despite only having just learned how to play.

The next and final stop on my whirlwind tour of Super Mario Odyssey was Bubblaine in the Seaside Kingdom. Yes, this is the one with the nipples. Another drastic change in visual style to the worlds I’d played prior, Bubblaine is a gorgeous coastal area populated by snail people, who’ve had their precious tank of sacred water taken over by a mean looking octopus. This world felt smaller than a lot of the others that have been shown to the public thus far, but it was still similarly open-ended in its design. My first port of call before sorting out that tentacled bully was to locate the Crazy Cap store to buy those bright red board shorts and show off some skin. Fun fact: if you stand around too long at the beach, Mario’s nose gets sunburnt! Once that was done, it was time to locate and activate some emergency buttons around the beach to bring ol’ eight-legs down for a fight. Getting around the Seaside Kingdom is a blast thanks to a certain smaller octopus enemy type that gets around in a floating bubble and uses water jets to propel itself in all directions. Needless to say, jetting around the place is a blast, and it plays a critical part in the ensuing boss fight with my purple cephalopod friend, which I’m not embarrassed to say I failed at multiple times. I get stage fright when people watch me play. Aside from my failings as a gamer, Bubblaine is a great change of pace, a more chilled atmosphere and a small but open-ended beach playground for Mario to frolic in. It helps that Super Mario Odyssey continues to look absolutely gorgeous, too. Every demo I’ve played so far has been in TV mode, so I can’t vouch for how the game holds up on the handheld yet, but I’m pretty confident it’ll look just as amazing.

“Those Splatoon kids think I’m too old to play? I’m-a show them!”

Unfortunately, it was here that my brief time with Super Mario Odyssey concluded. There was never a doubt in my mind that Nintendo would knock it out of the park with this game, but the small taste that I got this week just served to solidify that fact. Plus, I got to see more than a few of the finer details that really come together to make this a special kind of game, something that doesn’t come around as often as it should. Expect to hear a lot more from me when Super Mario Odyssey launches on October 27th this year.