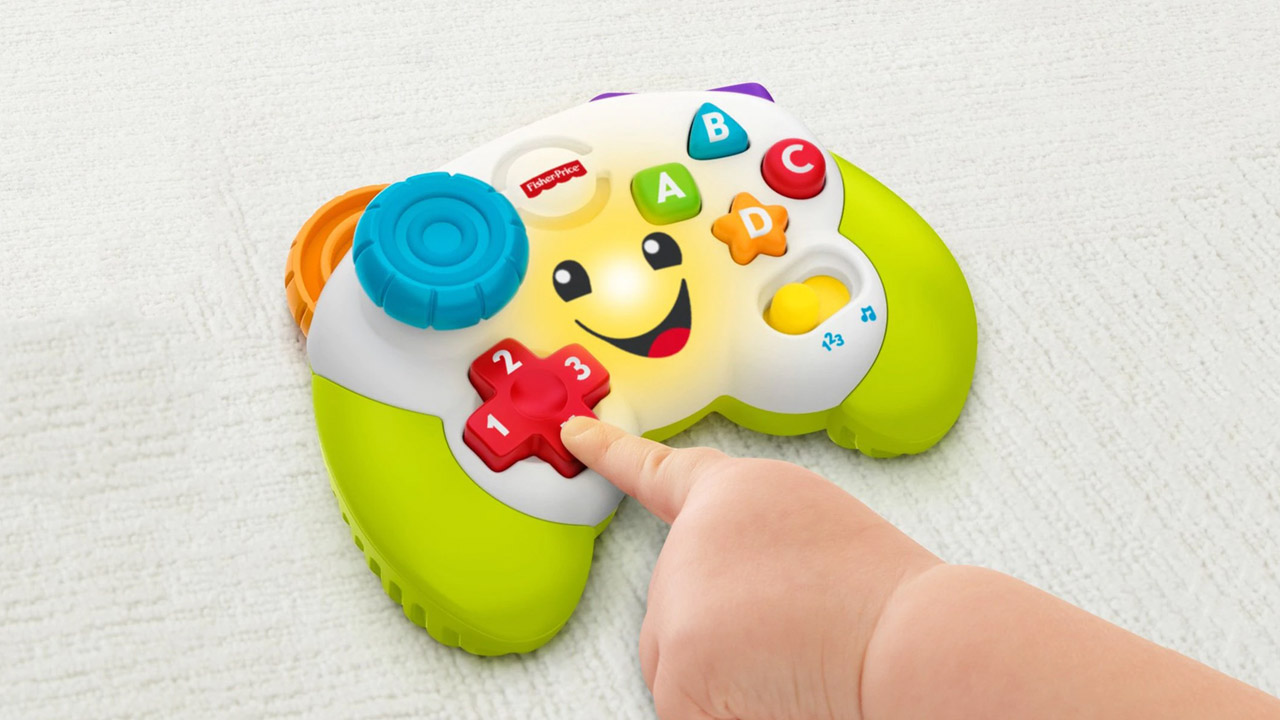 I am a gamer. And a dad. Sometimes it is nice for those things to overlap.

That is why when I discovered a toy game controller from Fisher Price, I was excited at the idea of my daughter getting her own simulated play experience.

I mean, anything beats the tried-and-true ‘hand them the unplugged Player 2 controller’, right?

Then I came to realise the thing is cursed. As a parent, there are a small number of things you can do to retain some level of comfort in your life after it has been invaded by tiny beings. One of those golden rules is carefully monitoring noisy toys.

So imagine my horror when I discovered the abomination pictured above does not have an off switch*. Every button will spew out a noise, it will intermittently sing at you – and I am genuinely sure the thing has an ‘attract mode’, where it will randomly play a song if it hasn’t been played with for a few minutes to try and convince your little tyke to pick it back up.

So, I quickly removed the item from the possible-Christmas-gift list and continued a blissful life of my daughter doodling around with a battery-less Xbox 360 controller.

Then, I saw this nightmare.

it can do anything a standard controller can do, PLUS it still makes all the annoying sounds it did originally

Rudeism treads the line between genius and madness, modifying the controller to actually interface as a gaming device. Every button is painstakingly engineered to behave as you would expect, even going so far as to account for the lack of a second analog stick by cleverly utilising a switch on the device to swap the existing stick input between left and right. It’s quite impressive.

Then, his true terrifying masterpiece is realised – ALL of the sound effects are intact.

and thanks to @Wario64 for the off-hand joke that inspired me to make this happen 😂 pic.twitter.com/3OETvcsEsI

I have stared long into the abyss of odd input options. I have seen this madman playing Overwatch with actual bananas, folks using dance pads to beat Dark Souls and even gaming goober Muselk using a steering wheel to play Team Fortress II.

But this is something far more sinister – long after the novelty of the controller itself wears out, the sounds will echo in your mind forever. Red! Orange! Orange! Red! Green! KA-CHING! KA-CHING! Orange!

Rudeism has long established himself as a master of his dark art, and this latest milestone may well be his greatest endeavour yet – I only pray that he does not intend to enter a partnership with Microsoft/Fisher-Price to mass produce this cursed, cursed object.

Does the ‘Laugh & Learn’ toy video game controller fill you with joy? Or dread? Let us know in the comments or on social media.

* Edit: I have since been informed that more recent versions of this toy now include an OFF switch. However it still doesn’t have a volume control. Be wary fellow parents.