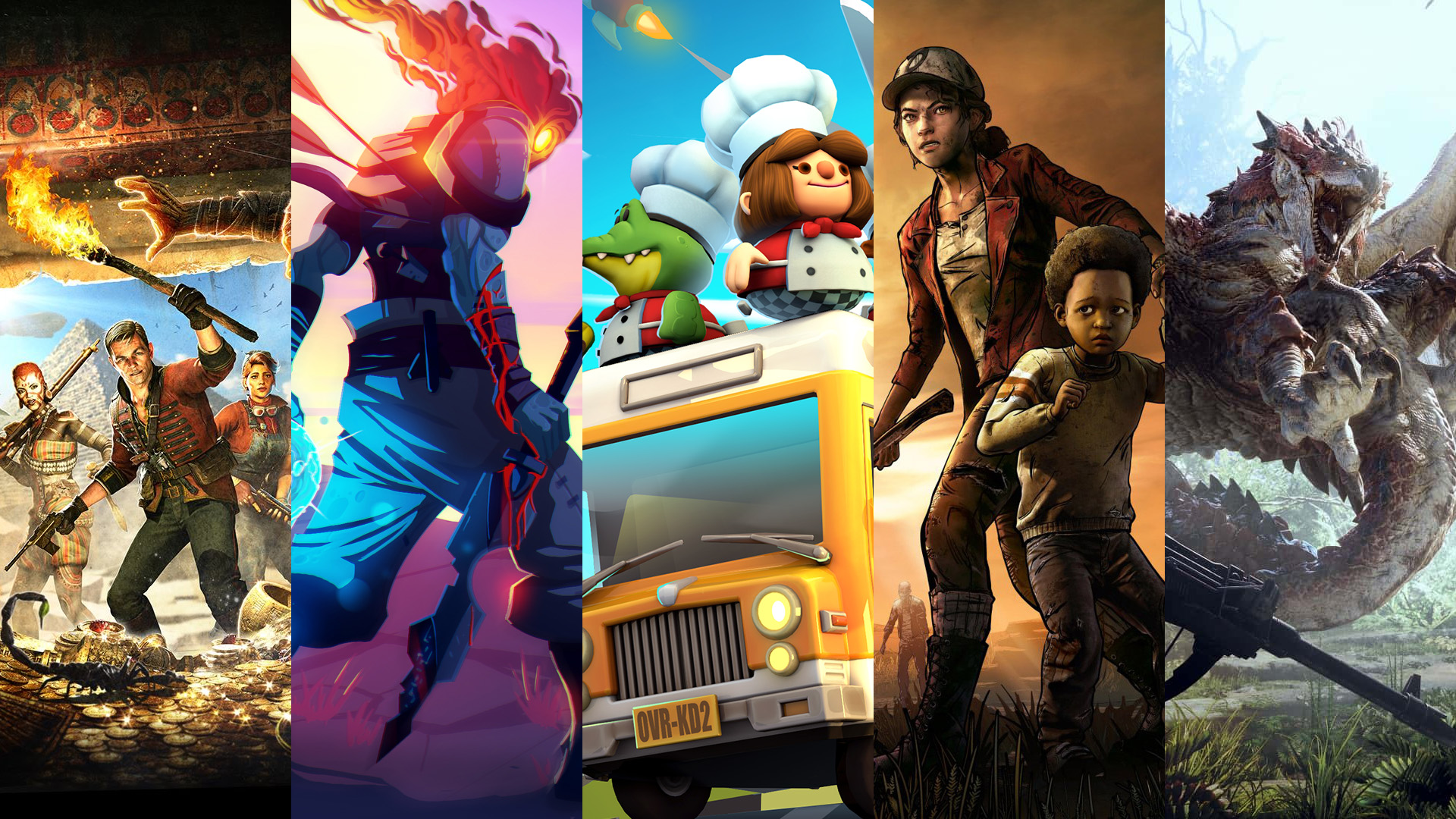 Winter is almost over. We can finally go outside again to enjoy the Spring sunshine, only to instantly run back inside because these bloody games aren’t going to play themselves are they? So what’s depriving us of Vitamin D in August?

Monster Hunter: World is on PC BABY. Aiming? With a MOUSE? Cranking my graphics up to eye blisteringly incredible levels? My graphics card weeps. This will be the definitive Monster Hunter: World experience, and I can scarcely contain my excrement. I have played hundreds of hours on the PS4, and enjoyed every moment, yet I must now face the fact that my PC version of MH:W will carry over precisely ZERO of my hard work. Does it bother me? A tiny bit, but the game is so genuinely enjoyable that the idea of working back up to that level with a new crop of PC-born mates tickles every one of my predatory hunter-bones.

Dead Cells is a game that I very nearly purchased on Steam. I had it in my cart and everything – but right as I went to pull the trigger I couldn’t help but feel an overwhelming desire to play it on my Nintendo Switch. I have somehow developed a very particular taste for what I enjoy playing on the Switch, and Dead Cells fits that mould beautifully. With engaging gameplay and an immersive world to delve deep inside of, I want to be able to experience those moments anywhere – and my Switch is the vehicle to make that happen.

Today I went and dug out my most hipster-looking pair of jorts, washed them and pressed them and hung them up ready to wear for the entirety of August because damn there’s some good indie content coming!

That’s right, I’ll be sitting pretty in my corduroy half-slacks while I play the likes of Dead Cells, Overcooked 2, State of Mind and (much to my giddy excitement) Guacamelee 2. The big one for me though (provided it does indeed make its August release window) is Flipping Death. Developer Zoink! continue to win me over with every new game they release, and this one absolutely looks set to continue that trend.

Oh, and while we’re on the subject of HD remasters and remakes of sixth-gen, Japanese open world action games (we weren’t), did someone say Shenmue I & II and Yakuza Kiwami 2? すごい!

In my opinion, it hasn’t really been jorts weather recently, both in terms of climate AND game releases. That being said, there are a few little glimmers of sunlight through the clouds this month, and that’s enough for me to get my pasty white legs into some too-tight jean shorts.

I don’t know if I’m having some kind of glitch in the matrix moment, but I swear that I’ve already said, multiple times, about how excited I am for Okami HD to be coming out this month. Maybe it’s because it’s being ported almost as many times as Skyrim or maybe it’s some kind of fold in space-time. Either way, Okami on the Switch is going to be amazing and worth ruining the fabric of reality over (or ruining the fabric of my jorts, right?).

Telltale’s The Walking Dead is commencing its final season this month, finally bringing the heart-wrenching story of Clementine to an undoubtedly emotional end. Can we expect a cheerful and gratifying conclusion to our beloved heroine’s terrible tale of survival in a zombie-infested wasteland? Probably not. I am prepared, however, to sit through whatever god-awful things Telltale have planned for this season because they can tell one hell of a story.

After all that gore and suffering, I’ll probably cleanse my palette with the gorgeous looking Little Dragons Café. It looks a lot like Harvest Moon meets a restaurant sim with a huge dose of exploration and dragon taming mixed in. It’s going to be hard to knock my favourite time-waster Stardew Valley off the podium, but I feel like this could give it a good crack.

And last but definitely not least, Divinity Original Sin II comes out at the end of the month, which I am probably the most excited about. I’m so in love with the first game, which is essentially an isometric digital version of Dungeons & Dragons, and this looks like it takes the formula from the first game and turns it up to a Nat. 20. If you’re looking for me between now and the end of the year, I’ll be in Rivellon with some fancy new chainmail jorts.

August is the month of Monster Hunter really. Monster Hunter: World finally makes its way to PC which means that I’ll (hopefully) be able to play the game at a decent steady framerate and with less visual glitches. Hell, I even put almost 300 hours into the PS4 version so I doubt I’ll enjoy the game any less. After this I also have Monster Hunter Generations Ultimate on the Switch. I’ve never played MHG before, I’ve never really played any MH game outside of World before, but my friend tells me MHGU is full of cats so I’m sold. I’m also pretty keen on Salt & Sanctuary for the Switch as well as Okami HD for the Switch, so you could say that August is the month of playing old games, but thems the breaks. Well, Guacamelee 2 is coming out in August and that’s new. The first one was sick, reminded me of my Chilean homeland (not actually).

So, all-in-all, Monster Hunter has me set for August, and I have a chance to revisit my (not) home.

Another semester at University has just begun but that isn’t going to stop my indulging in plenty of games throughout August. I’m an enormous fan of Metroidvanias, and thankfully I have both Dead Cells and Guacamelee 2 to play throughout the month. Dead Cells has had plenty of praise heaped on it, while Guacamelee 2 is coming from the ever-reliable Drinkbox Studios, so I have no doubts they’ll be absolute gems. As always, my Switch will be getting plenty of love, with Minit and Monster Hunter Generations Ultimate both releasing. Minit looks intriguing with its sixty-second lives mechanic (it’s a minute, get it?), while Monster Hunter Generations is sure to be a time sink that’ll try its best to derail my studies.

The Walking Dead: The Final Season will release on August 14th and I’ll be playing the first episode the moment it’s available. Telltale Games have had a rough time of it lately, but I’m hopeful that this final season will serve as a great end chapter to Clementine’s story. Lastly, I want to shout out State of Mind, a sci-fi thriller that is seemingly an adventure game with a rich story. If you haven’t seen the game’s trailer, I highly recommend you do so. August is going to busy, but who can complain about having too many games?

After a month off from jort duties I am ready to whip my peach into a fresh pair of half-cut denim delights, although there’s not a lot that’s causing them to crease this month. I will admit to being curious as to how We Happy Few turns out. I didn’t love it when I played it in Early Access, but the premise is enough to keep me intrigued. PES 2019 is another game I’ll be sure to have some moments with later this month, and although I am a FIFA fanboy at heart, my desire for the world game isn’t exclusive. Strange Brigade is my pick for the month. I’m not sold that it’s going to be a killer-diller affair, but it looks like it’ll provide some fun moments here and there. Lastly, I am hoping that SCUM follows through and releases this month in Early Access. Looks neat, although it’ll probably launch in rougher condition rougher than an Indonesian prison. Quite fitting since it’s based on Schapelle Corby’s story. Okay I made that up, but it is based on prisoners inside Alcatraz.