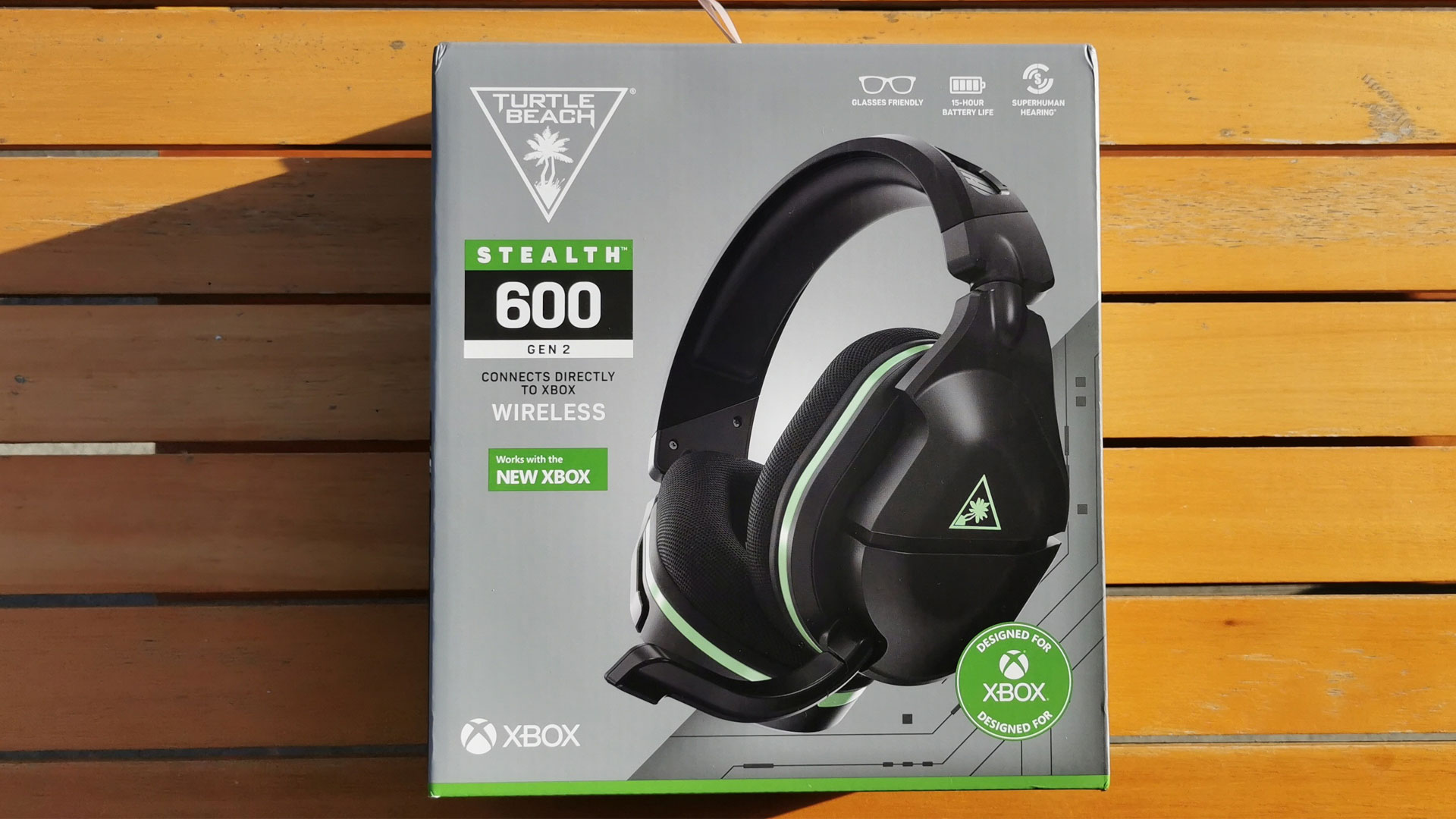 A new generation of gaming consoles brings with it a new range of accessories and peripherals. One important peripheral for any gamer is a headset, for those times when you need to keep the sound down for those around you, trash talk your mates or simply immerse yourself in a game’s world and story. Turtle Beach has been around the traps long enough to know how to make quality gear, after all they claim to be number one in gaming audio on their packaging. I was lucky enough to go ears-on with the Gen 2 version of the Stealth 600 wireless headset for Xbox consoles for the better part of a month to see if that statement has some truth to it.

In the box you’ll get the headphones, a USB-A to USB-C cable (used to update the headset’s firmware via PC), some information material and a Turtle Beach sticker. From a looks perspective the Stealth 600 Gen 2 looks, well, like a headset. It’s available in both black or white, with the black model featuring a green band and Turtle Beach logos (both inside and outside) on both ear cups, giving it a distinct Xbox look. Connecting the headset to the console follows the same process as connecting a new controller: hit the sync buttons on both console and device and pair them up. The biggest boon to this is that it doesn’t require a dongle or receiver to connect the console, meaning it’s not eating up a USB port that could be used for other accessories.

Like the Gen 1 version of the Stealth 600 on the ear cups have a nice fabric cushion finish with what the company calls ‘breathable mesh’ and the underpart of the headband features faux leather padding. The left ear cup is where all the action is, with the unit’s USB-C charging port (good riddance micro-USB), power button, mode button and volume control wheels for game audio and chat audio. You’ll also find the headset’s pull-down microphone, which features flip-to-mute technology, and when not in use the mic hides away nicely. A lack of 3.5mm input is a bit of a pain for those who would like the ability to plug directly into a controller or another device (such as a phone or tablet), but it does seem that the good old 3.5mm audio jack is going the way of the dinosaur.

Comfort is a huge part of any headset’s appeal and the Turtle Beach’s I’ve used in the past weren’t as comfortable as I would have liked, feeling a little loose – though I do have a small noggin in fairness. The Stealth 600 Gen 2, on the other hand, feel nice and snug, perhaps even a little tight when initially putting them on due to the firmness of the fabric cushions, but after 10-15 minutes they felt comfortable, although wearing them for long sessions can cause some discomfort. Resizing the headset to fit bigger melons is easy, just slide the adjusters on either side of the headband for a better fit. Turtle Beach claims that the headset is glasses friendly and as I don’t wear glasses personally I asked my girlfriend to be the guinea pig, as she wears glasses, and she said they were indeed very comfortable to wear. I know several people who do and they’d be rapt with this inclusion.

From a build quality perspective the Stealth 600 Gen 2 features a flexible headband and swivel ear cups which Turtle Beach says help make it a robustly constructed headset, however the plastic nature of the headset does make it feel cheap. While it’s not cheap like a Kmart home brand job and certainly not a deal-breaker by any stretch, for A$169 it does feel like Turtle Beach has cut corners here somewhat.

A number of ways to control your headset

Featuring 50mm speakers with the company’s Superhuman Hearing technology , the Stealth 600 Gen 2’s offer a solid aural experience. They’re far from the best headset I’ve used, but they’re also far from the worst, and whether you’re cutting down demons in Doom Eternal while basking in the glory of Mick Gordon’s shredding soundtrack, revving your car’s engine in Dirt 5, or listening to music, the audio range is decent. The headset features four built-in presets: Bass Boost, Treble Boost, Vocal Boost and Signature Sound, all of which have their uses, although I found myself using Bass Boost and Signature Sound the most. The microphone quality is fine for gaming, with chat audio clear enough for solid banter (when you disable microphone monitoring via the Turtle Beach Audio Hub on PC), however if you’re looking to take YouTube or Twitch by storm you’re probably going to need something from a bit higher up the shelf. The Stealth 600 Gen 2’s also feature support for Windows Sonic, which enables virtual surround sound and 3D audio for compatible Xbox and Windows 10 devices.

While the audio quality gets a tick, I did encounter some connection issues where the sound would make a tiny fuzz-pop sound like it dropped out and reconnected within a microsecond. It was more noticeable during scenes with dialogue than when a game’s audio or soundtrack was drowning it out, and while it wasn’t necessarily a nuisance, other headsets I’ve used haven’t had this issue.

Turtle Beach states that you’ll get 15 hours from a single charge, which from my testing seems about right (give or take an hour or two). It’s not the biggest battery life on the market but it’s more than enough for a couple big sessions before charging it again.

The mic tucks away nicely

The downside to any platform-tailored gear is that you run the risk of limited compatibility with other platforms, such as PS4/PS5 or PC in this case. Ideally, you want a headset that you can use with all your devices, and while the Stealth 600 Gen 2’s do claim to work with Windows 10 there is a caveat, which is that the Windows 10 machine must support Xbox Wireless devices, otherwise you’ll need the Xbox Wireless Adapter as the headset doesn’t appear to work when connected to a computer using the USB cable. Testing the headset on Windows 10 I encountered more connection issues than when using the headset with the Xbox Series X. It’s not a consistent problem as it does come and go, but at one point it was happening so frequently that it reminded me of playing a burnt CD in high school and that had been scratched to buggery to the point that some songs would skip consistently throughout.

If you’re after a mid-range priced headset for Xbox consoles and to a lesser extent Windows 10, then you could do far worse than the Stealth 600 Gen 2’s. It’s got solid audio quality, is relatively comfortable and has enough features that will satisfy the average punter, although the limited platform compatibility and connection issues do hinder the experience. 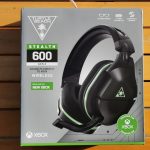 Turtle Beach Stealth 600 Gen 2 (Xbox) Review
Not Quite A Turtle Wower
Backed by solid audio quality, the Turtle Beach Stealth 600 Gen 2's for Xbox is a decent purchase if you're looking for a headset to use within the Microsoft ecosystem despite some minor nuisances
The Good
Solid audio quality
Easy connectivity that doesn't require a USB dongle
Decent battery life and USB-C charging
Relatively comfortable and glasses friendly
The Bad
Connection issues can be a nuisance
Limited to Microsoft platforms only
Build quality feels a little cheap
Long sessions may cause discomfort

Turtle Beach Stealth 600 Gen 2 (Xbox) Review
Not Quite A Turtle Wower
Backed by solid audio quality, the Turtle Beach Stealth 600 Gen 2's for Xbox is a decent purchase if you're looking for a headset to use within the Microsoft ecosystem despite some minor nuisances
The Good
Solid audio quality
Easy connectivity that doesn't require a USB dongle
Decent battery life and USB-C charging
Relatively comfortable and glasses friendly
The Bad
Connection issues can be a nuisance
Limited to Microsoft platforms only
Build quality feels a little cheap
Long sessions may cause discomfort
In this article:audio, Hardware Review, stealth 600, Turtle Beach, turtle beach stealth 600 gen 2, xbox headset, Zach Jackson