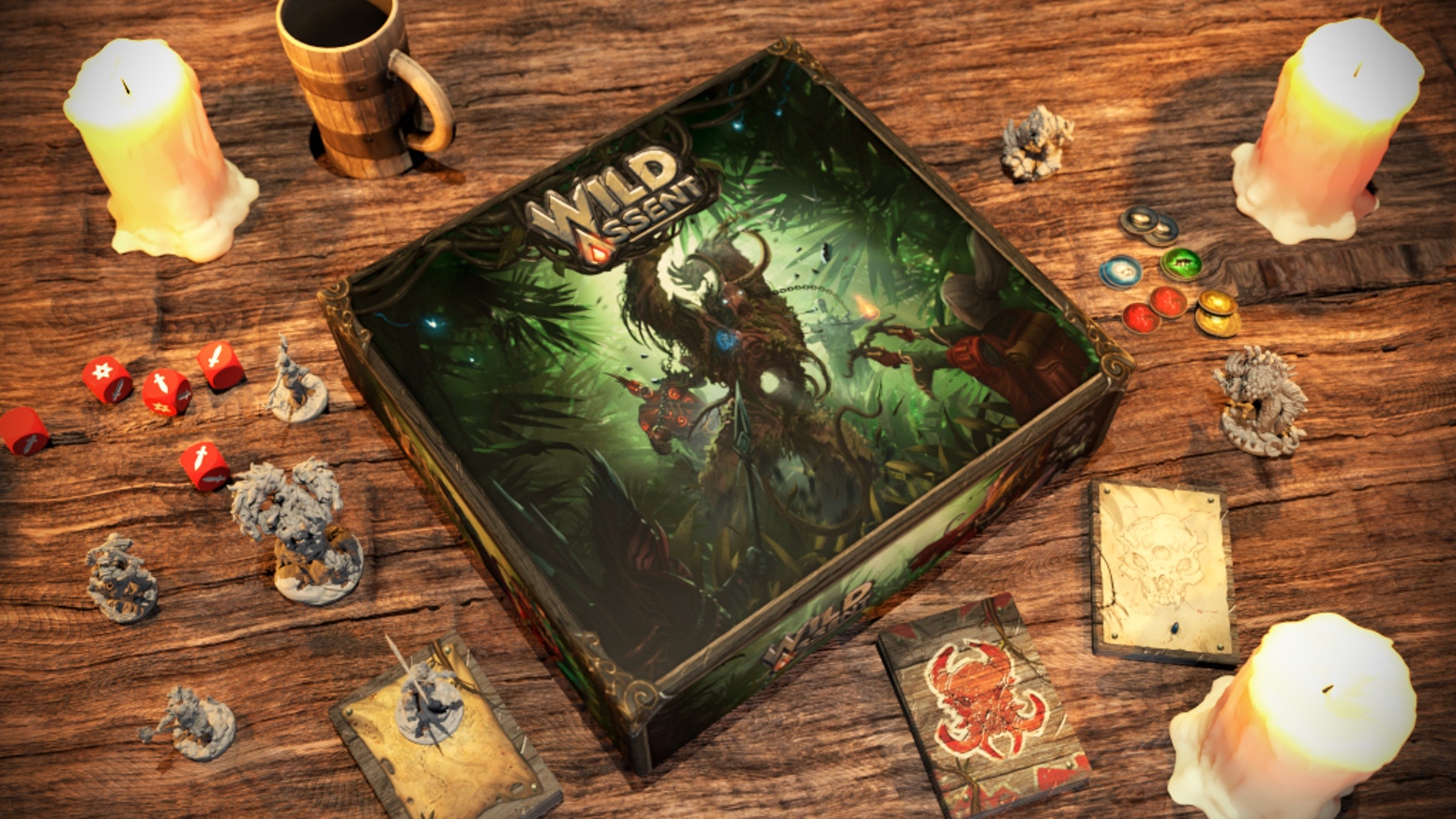 As we pass the midweek point, a reservoir of creativity is tapped and the next big helping of crowdfunded board game projects have arrived. After last week’s couple of big-name IP adaptations, today sees more humble and understated ideas take centre stage. But for those that enjoy their big-budget miniature extravaganzas, or elegantly illustrated card games, there are still goods to be found here.

Game Of The Week

At first glance, here is a game that looks remarkably like the Monster Hunter World board game adaptation. Wild Assent was originally kickstarted in 2018 as an arena battler, with hunters testing their will to slay large, strikingly detailed monsters. With this reprint run, Lazy Squire Games are giving the base game a narrative twist with the Lavon Rising expansion. Boasting a 100+ page branching narrative storybook to guide the adventure, alongside another staggering helping of lovingly crafted minis, this could be a compelling alternative for those that missed the Monster Hunter campaign this year. With the base game currently shipping out to initial backers, this reprint is set to reach backers within the next 12 months – likely much faster than the Capcom behemoth, too. New players looking for the arena experience can back now on Gamefound for USD$119.00 (AUD$160) plus shipping, or go all-in with the new expansion for USD$369.00 (AUD$495).

With infinitely more charm than a hessian bag loaded with Mr Potato Heads, this third entry in the card-based Potato Pirates series aims to ease players into the world of logic-based coding. Players choose a captain from among a cartoonish spud ensemble based on marine legends such as Gravy Jones. From there, captains will deck out their ships damage and abilities by layering code cards that use conditionals and loops, effectively computer science logic 101. The wide age appeal is terrific, with an educational game like this avoiding any patronising pitfalls by assuming no prior coding knowledge, simply a high-school level understanding of English. Base editions pledges are going for USD$25 (AUD$35) and Kickstarter pledges with additional and future expansions are USD$65 (AUD$90). The Kickstarter campaign ends July 26 11AM AEST.

Villages is a beautifully minimalist card game that proves the adage that it takes a village to build…A village.

1-5 players will draft cards in turns from a pool, strategically selecting from themed suites to build a tableau, or laid-out collection, of resources, technologies, culture, and peoples for which the village is composed. These types of tableau building games involve creating a story before each player by the arrangement of cards in families of tech trees, breathing life into the satisfying yet sterile research trees relegated to sub-menus in games like Sid Meier’s Civilization. The Shifting Season expansion that has launched this reprint introduces clay as a new resource suite, introducing technology paths such as bricklaying and ceramics to the village. New players can pledge for the base+expansion for £39 (AUD$72) or returning players can get the expansion for £13 (AUD$25). The Kickstarter campaign ends July 23 2021, 6AM AEST.

Not every week is a blockbuster week in the world of crowdfunded board games. With the close of another financial year, some humble established names on the scene get to steal the spotlight off the big publishers. But here at WellPlayed, we still haven’t learnt to stop overinvesting in 10KG games full of plastic, but we still love the modest little card games with novel ideas and cute illustrations. Let us know in the comments if you made any pledges in June. The Binding of Isaac: Four Souls, anyone?