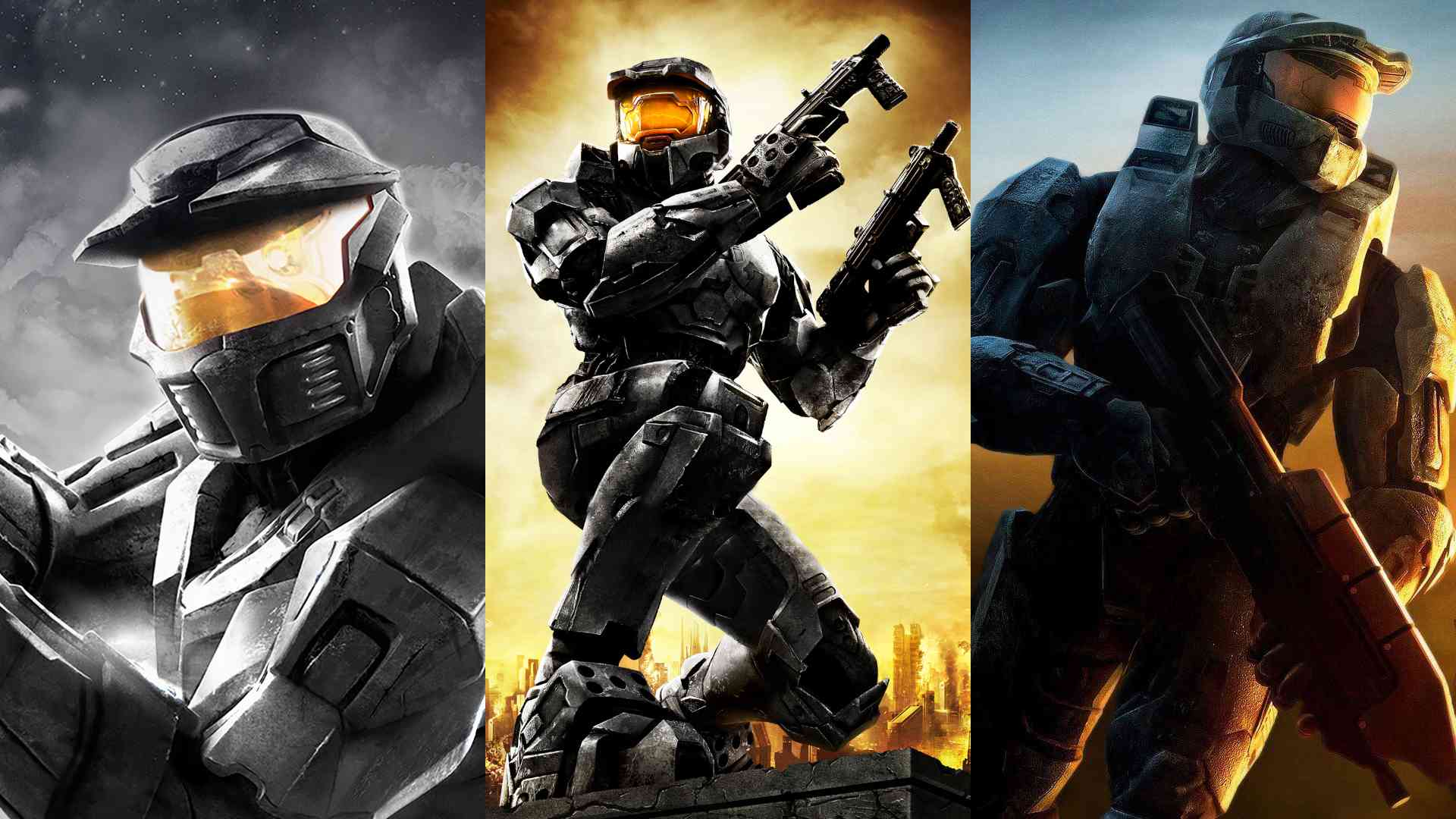 The time has finally come to finish the fight on PC…almost 13 years after the fight could be finished on the Xbox 360. PC players of the Halo series have been begging for Bungie’s iconic and genre-defining shooter series to truly call PC home for quite a while and, for those only interested in the original trilogy, the wait is over. Halo: Combat Evolved Anniversary, Halo 2 Anniversary and Halo 3 are all available on PC now. If you read my review of Halo: Reach on PC you’d know that I was quite pleased with the port of Bungie’s last Halo game. While it wasn’t perfect, it showed an encouraging level of care and attention that 343 Industries put into the game when bringing it to the Halo-neglected platform. Now, let’s take a look to see if the other Halo games were just as carefully ported and examine the life of the Halo trilogy on PC.

On March 3rd, 2020, Master Chief set foot on PC in the form of Halo: Combat Evolved Anniversary. This was almost three months after the release of Halo: Reach and my expectations weren’t exactly met. Now, I’ve played my fair share of Halo: Combat Evolved on PC already and have been treated to a number of the community-made projects, like SPV3, a singleplayer-focused mod which expands on the original game’s campaign through changed mission layouts, new weapons and more. So, I was already fairly familiar with how the game should handle on PC. Still, it had no ultrawide support and the port originally made by Gearbox was…well it was kind of shit. Bad frame interpolation on the animations meant that characters in cutscenes would move at 30fps while the rest of the game would be going at 60fps was probably the most infuriating one as it completely broke the flow of Halo: Combat Evolved’s in-engine cutscenes. Unfortunately, because Halo: Combat Evolved Anniversary is based on Gearbox’s port, all these problems persist and some new issues make for a frustrating experience.

To kick things off, the input delay issue across online co-op for the second player still exists which is an annoying thing to deal with when playing any game and it can make Legendary runs even more brutal. There’s also the issue where shooting the plasma pistol too quickly causes the overcharge sound to play for a while, even when the weapon has been withdrawn or swapped out entirely. Naturally, there still are some interesting quirks which the game has always had and it was almost a better experience to see those quirks preserved (like vehicles automatically killing you if you touch them while they move). There was also a really, really dumb issue where the game would constantly play the wrong music. This was an issue that made its way into the Xbox version as well, so I’m not sure what got messed up there but it was pretty silly. Where my biggest problem lies with this port isn’t exactly the port itself, but some of the tech behind it.

Bungie’s game engines have been predominantly focused around CPU usage and not as much GPU usage, a strange focus when considering the fact that consoles have typically had underpowered CPUs – hell, it’s the reason why Destiny 2 cannot run at 60fps on consoles while enjoying high framerates on PC. Halo: Combat Evolved is one such case. While my PC isn’t exactly top of the line as it once was, a Ryzen 7 2700X paired with a 1080 Ti is still nothing to be scoffed at. It should be creaming most games (as well as my jorts) and, in Halo CE Anniversary, the lower IPCs (instructions per clock) drawback of my Ryzen CPU, when put up against a comparable Intel CPU of the time, were abundantly clear. While not atrocious in performance, dips below 60fps with larger draw distances showed the limitations of an older engine. While I remain confident in 343i for Halo Infinite and the Slipspace Engine as Halo 5: Guardian’s technical performance was great (even though the game was not), this port of a 2011 game made me consider upgrading to a 3rd-gen Ryzen CPU (which I really don’t need) due to outdated software engineering. And no, I won’t go Intel, I burn enough money as it is playing Destiny 2.

Halo 2: Anniversary…what to do with you. For starters, you’re probably one of my favourite Halo games. You have a great campaign with some incredible moments in it, as well as excellent level design. What’s not to love? If you ask Halo 2 modders, they’ll tell you that they have no idea how Bungie got the game to function at all as touching anything would cause the entire game to fall apart – the fact that it came out as good as it did is a bit of a miracle. Regardless, on May 12 we received H2A on PC and it was…by far the most problematic release of the collection so far. Things like crashes, NPC dialogue being (sometimes) incredibly quiet and the input lag STILL being an issue, H2A was (and still is) an incredibly clunky and buggy port.

Hell, it literally took me 15 minutes to have it crash on me because…reasons? Apparently the game didn’t like boxes flying at insanely high speeds in rooms with low gravity even though those settings are all found in-game and weren’t added by any form of mods. So, perhaps there are some more optimisations to be made there.

This also isn’t the first time that Halo 2 has been available on PC. Though it took an additional three years following its initial console release, Halo 2 did make its way to PC in 2007 in the form of Halo 2 Vista which was somehow equally as problematic but for different reasons. The big one is the fact that it used Games for Windows Live, Microsoft’s joke DRM software during the Windows Vista days (which also didn’t help with the poor perception of Vista itself). You could actually still play Halo 2 normally through Project Cartographer and it’s honestly what kept me from losing my mind while I was waiting for H2A to release.

But I digress, H2A was surprisingly bug-ridden and it was hell…yet I still loved it. How could I not? It’s Halo 2. Its technical performance was also suffering from the same issues that Halo CE Anniversary did, its use of old tech really began to show its weaknesses. There were also some issues with lighting in the periphery of ultrawide displays, but that is pretty forgivable given that the games were never designed to be run in ultrawide resolutions anyway.

I didn’t actually play a lot of the multiplayer because PVP has never really been my thing. I only ever really played SWAT in Halo: Reach due to its simplicity and how good the gunplay in Bungie’s last Halo game was.

Halo 3 released on September 25, 2007 for the Xbox 360, November 11, 2014 for the Xbox One and July 14, 2020 for the PC. It’s had a long history and has always been regarded as one of the greatest multiplayer shooters around and it capped off Bungie’s brilliant trilogy. As you can clearly see by the release dates, PC players were left hanging for the conclusion of Master Chief’s thrilling adventure for 13 years, only for the wait to finally be over. People that were anticipating this release were treated to a really solid experience, with some technical optimisations that put the first two games’ MCC PC ports to shame.

Unlike Halo and Halo 2, Halo 3 never received the anniversary treatment and the fact that MCC exists more as a launcher rather than a game in and of itself means that, touch-ups aside, the Halo 3 available in MCC is as true to the original as can be. Even bugs and exploits that existed during the game’s Xbox 360 still exist, like actually hijacking the Anti-Air Wraiths in the campaign. While it’s weird that a 2020 release of a 13-year-old game having the same bugs and glitches as the original is comforting, it’s actually quite an important thing in this case as it ensures that people that never got to play the game due to their platform preference have a comparable experience to those that have had the chance to play it.

If you read my (now almost-four-year-old) article about my experience with depression and how gaming helped me, you’d know that Halo 3 holds a special place in my heart. This port had to be good because of my sentimental attachment to the game, and it was! The performance was pretty stable, I never dipped below 60fps and didn’t have a single technical issue, though I did find this box with legs.

Let’s move on to my favourite thing – ultrawide support. If you’ve read my more recent articles you would be well aware that a game releasing in 2020 that doesn’t support ultrawide is disappointing. Hell, it was one of my biggest annoyances with Monster Hunter: World at launch, though that has since been fixed and the Monster Hunter team have done a great job at improving the PC version tenfold. But I digress, I wasn’t exactly expecting a 13-year-old game to support ultrawide as the game was built for consoles only and ultrawide displays weren’t really a thing back then. Much to my surprise, Halo 3 on PC natively support ultrawide to the point where even cutscenes are properly displayed in ultrawide, not pillarboxing or letterboxing to be seen, kind of (there is some very slight pillarboxing but it is very, very easy to ignore).

It’s really hard to say how the remainder of The Master Chief Collection being ported to PC will go. In the grand scheme of things, 343i nailed it with two out of the current four titles on the platform, with the misses still being playable, just rife with technical issues. However, what is a note of import is the fact that the two nightmarish ports are also games that were rebuilt for their remakes, whereas the games that run impeccably well were not rebuilt, they were just optimised. It makes me wonder if the decrepit engine the first two games were built on is the main reason for Halo CE and Halo 2 being such travesties on PC. I do hope that 343i manages to successfully port Halo 3: ODST and Halo 4 to PC before Halo Infinite (which I’m going to discuss in a later piece since the gameplay was finally revealed) releases so that PC players can experience the important parts of the Halo story (let’s forget about 5, please). Regardless, these classics still feel great to play on PC and the ability to use a mouse and keyboard has helped mask some of the poorly-aged aspects of the earlier games. Also, huge shoutouts to our friends over at Microsoft for allowing me to access Halo 3 on PC early so I could spend as much time with it as possible before writing this piece!