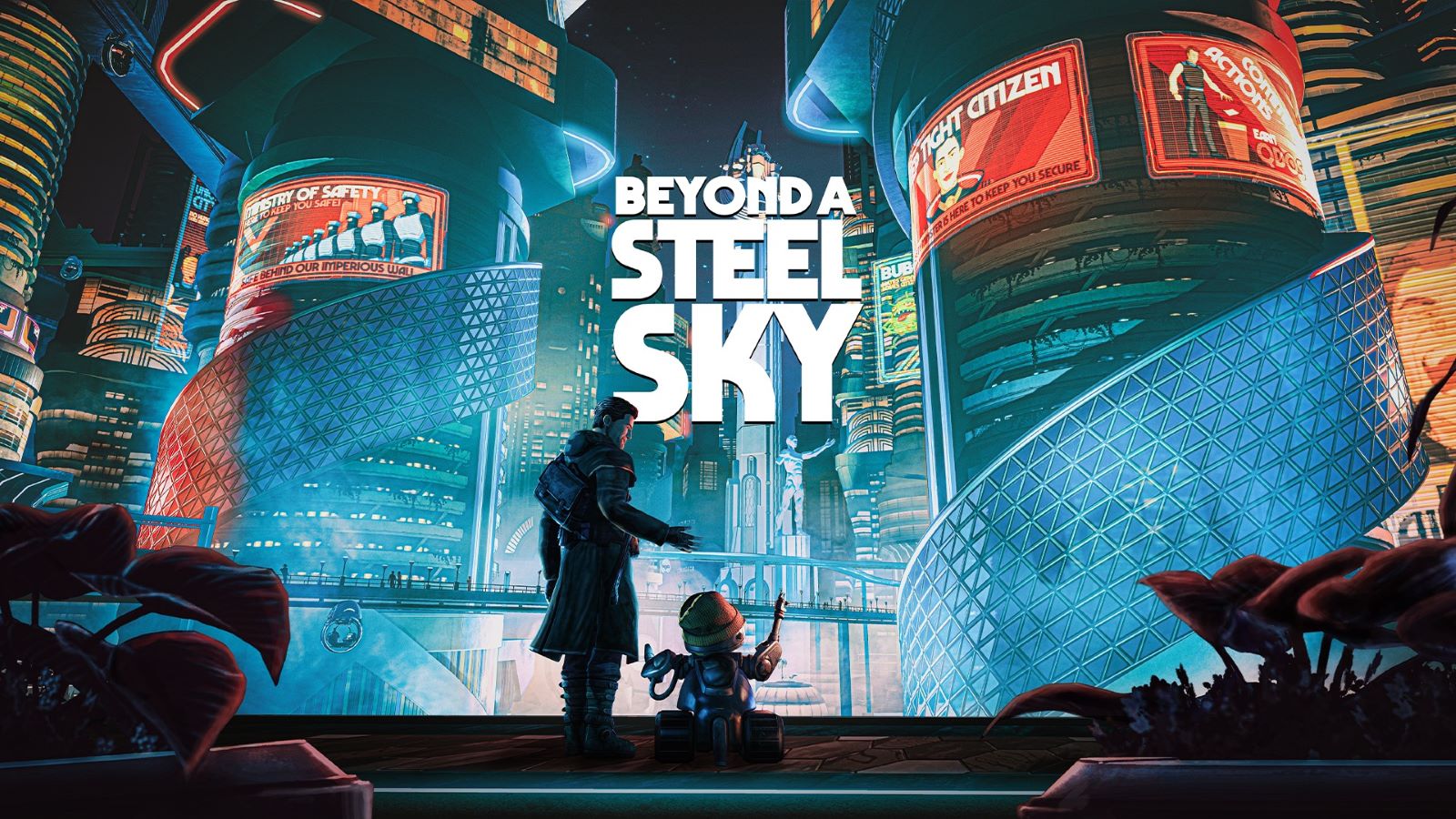 Developing a sequel to any video game is a challenge, let alone to a critically-acclaimed cult classic that was released more than 25 years ago. But that’s exactly the position Revolution Software found themselves in with Beyond a Steel Sky, the follow-up to 1994’s Beneath a Steel Sky, two games that are the brainchild of Broken Sword mastermind Charles Cecil and Watchmen artist Dave Gibbons. While the initial release of Beyond a Steel Sky was in June 2020 for Apple Arcade and July 2020 for PC, the game is now available for console owners. But does Beyond a Steel Sky deliver an adventure worthy of a 27-year wait?

For full disclosure I have not played Beneath a Steel Sky, however before jumping into Beyond a Steel Sky I did watch a primer and the game does give you an overview before kicking things off, so I had an understanding of what went down. But while there are a few callouts to the original, you don’t need to have played it to enjoy this entry, with writer and director Charles Cecil telling me in an interview recently that Beyond a Steel Sky is more of a spiritual successor than a direct sequel.

Set in the distant future in Australia and 10 years after the events of Beneath a Steel Sky, Beyond a Steel Sky sees protagonist Robert Foster return to the metropolis of Union City searching for a child named Milo who was kidnapped from his village out in The Gap (the wasteland area outside of the city). Of course, the kidnapping is part of a deeper and darker secret that Union City is hiding, and it’s up to Foster to uncover the truth and save Milo.

Union City is somewhat of a cyberpunk utopia, with towering skyscrapers littered with electronic advertising signs promoting the city’s services, worker robots and a travel system that can take you anywhere, as long as you have the authorisation to do so. The city was run by Foster’s best mate and android Joey until recently when he handed the keys over to a group known as The Council. The foundations of its operation run on a program called Minos, a system that tracks citizens’ activities, choices and happiness. It’s a compelling setting and one that you could spend ages exploring, and while it certainly gives you licence to do so, the game is very much a linear experience.

Backed by the art direction of Gibbons, Beyond a Steel Sky looks like a graphic novel, and while it doesn’t have the most striking visuals, there’s certainly a lot of detail and a lot of love put into it. Where the cel-shaded style doesn’t work is in the character models, which feel a little too cartoony and stiff at times.

Union City is full of detail

Beyond a Steel Sky is a massive departure from its predecessor and attempts to weave modern game design with classic adventure mechanics – it’s essentially a point and click game hidden under the guise of a third-person adventure. Unlike most point and clicks, players are in full control of Foster’s movements and are free to walk around and explore without needing to click everywhere they want to go. The one grievance is that occasionally the camera angle doesn’t agree with the controls and creates some awkward moments moving Foster around.

Revolution Software is no stranger to the adventure genre and their prowess at crafting these types of experiences is on display here. First and foremost, the writing and voice-acting is fantastic and given there is a key focus on dialogue, it’s no surprise that Revolution nails this. In classic Charles Cecil style, the writing is packed full of witty humour and charm, with characters all having their unique personalities – it makes you want to hear every dialogue option. The voice-acting, whether it’s the Australian, British or American accents, they all sound authentic and heighten the narrative’s immersion, which is complemented by the game’s stellar soundtrack, courtesy of Alistair Kerley.

Puzzles are a staple of any adventure game and early in the game, Foster is given a device that allows him to hack most Minos-powered devices, such as androids, advertising signs, doors and more. The majority of the puzzles utilise this mechanic and will task Foster with manipulating the environment for his benefit. For example, there may be a door that Foster is unable to open due to his social status, however Foster can hack the door to open for those that are rejected and vice-versa. In some cases, Foster will need to manipulate several devices to find the solution. It’s a simple mechanic that doesn’t overwhelm players, however towards the end of the game it does start to feel a little repetitive.

Yes, you can hack it

Players will interact with or acquire items within the world that are of use to solve the odd classic style puzzle, where Foster will need to use an item on a particular object or person, such as using a mini sausage to lure a bird away from a specific area. Aside from that, clues can also be obtained by speaking with Union City’s populace.

Gleaning every bit of information from your conversations with the city’s locals, whether they be human or machine, is essential to both pushing the narrative forward and solving puzzles. If there’s one knock on the writing and dialogue it’s that sometimes Foster can get the same information multiple times from the one conversation, however Foster is free to end any conversation when he wants, so the game doesn’t force you to exhaust all options before proceeding.

While the puzzles are mild when it comes to difficulty, now and again you’ll be scratching your head as to what to do next. Thankfully, the developers have implemented a hint system that slowly pushes you in the right direction. Each hint is locked behind a 30-second timer and each solution might have between four or five hints, meaning that players aren’t just given the answer without any real effort.

Running on the PS5, I did encounter some minor performance issues, with the frame rate struggling whenever Foster would walk down stairs or sometimes when he was in a large crowd. Nothing game-breaking by any stretch and something I am sure will be improved in future patches.

As an avid adventure game fan, I enjoyed my roughly 12 hours with Beyond a Steel Sky. It’s a bit of a slow burn, but the story is engaging enough to keep you intrigued until the end and the gameplay helps push the narrative forward without really bogging it down. It may not be Revolution’s finest effort, but fans of the adventure genre owe it to themselves to as least pay Union City a visit. 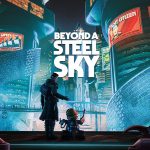 Beyond A Steel Sky Review
Reunion City
Built by veterans of the genre, Beyond a Steel Sky may not be a revolutionary adventure game, but its clever writing and intriguing story make it a solid entry.
The Good
Clever and witty writing
Excellent voice acting and soundtrack
Engaging and intriguing story
Union City is a compelling setting
Neat hint system
The Bad
Character models can be a little cartoony
Hacking puzzles can become a little repetitive
Some minor performance issues
8
Get Around It

Beyond A Steel Sky Review
Reunion City
Built by veterans of the genre, Beyond a Steel Sky may not be a revolutionary adventure game, but its clever writing and intriguing story make it a solid entry.
The Good
Clever and witty writing
Excellent voice acting and soundtrack
Engaging and intriguing story
Union City is a compelling setting
Neat hint system
The Bad
Character models can be a little cartoony
Hacking puzzles can become a little repetitive
Some minor performance issues
8
Get Around It
In this article:adventure games, beneath a steel sky, beyond a steel sky, Charles Cecil, dave gibbons, Microids, point and click, revolution software