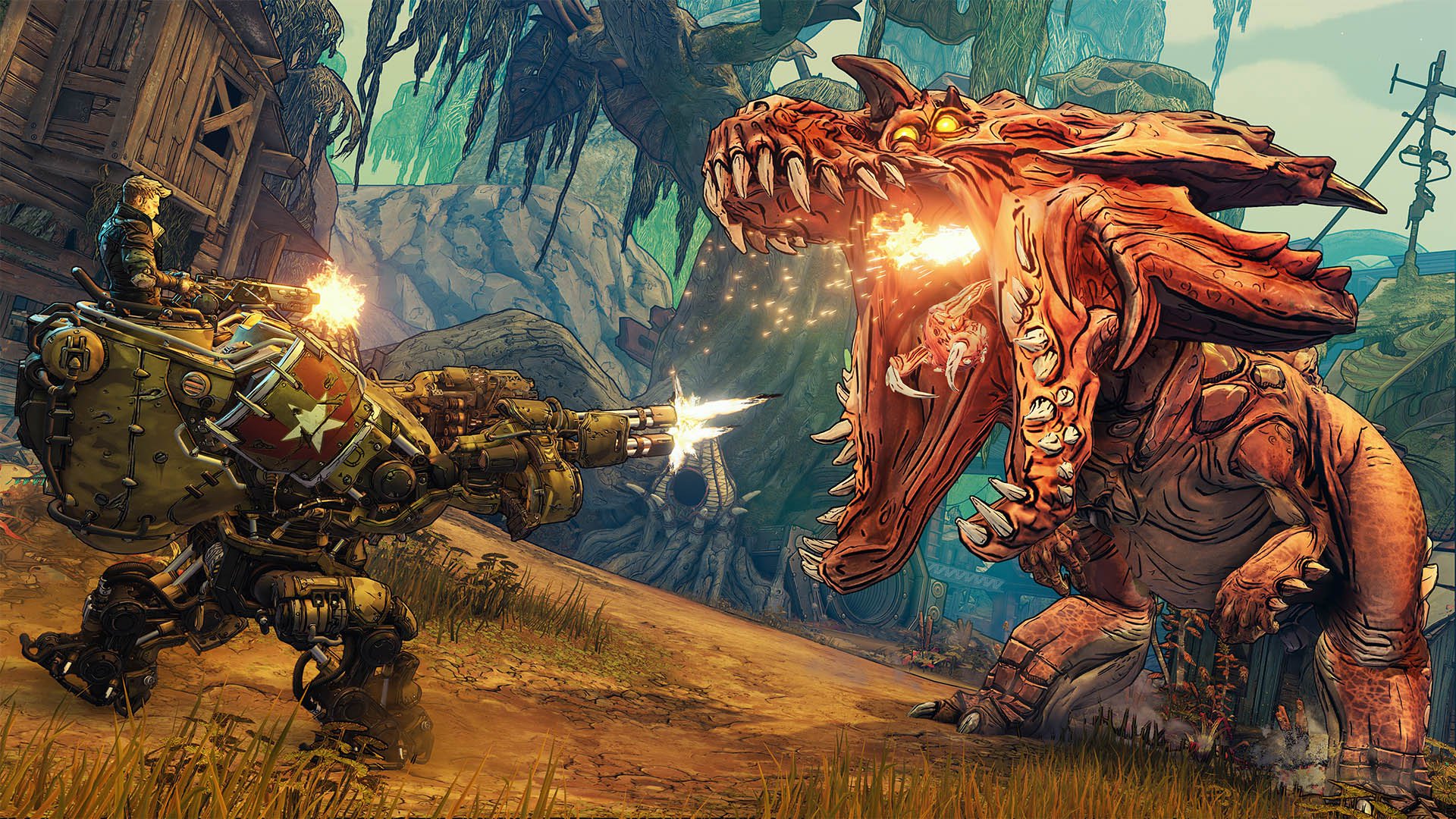 Borderlands has always been a bit of a weird series for me. Going through school, I adored the games. The addictive and gratifying gameplay loop that showered the player in absurd amounts of loot was just something that I could always get behind. Revisiting the games now shows me that in just about every aspect, aside from visually, time has not been the kindest towards the looter-shooter franchise. Dated gameplay, character design and humour make them feel that little bit less enjoyable. Well, until the loot starts to drop at least. That’s not to say that they’re bad games, they just show their age. Along comes Borderlands 3, a game which appears to be modernising basically everything about the series. Thanks to the lovely folks over at 2K Australia I got a significant amount of hands-on time with the upcoming looter-shooter and, while I’m no console-FPS expert, you’ll be pleased to know that the game felt like an improvement to its predecessors in just about every way.

For my session I got to play the introductory section of the game, and I was playing as FL4K, a Beastmaster who roams Pandora in search of vaults. That’s right — Vaults plural. As in multiple. After answering a call to help the Crimson Raiders, the player finds themselves outside a compound with *sigh* Claptrap. The game wastes no time introducing (or reintroducing) you to one if its more infamously annoying characters. This time around though the game seems far more self-aware about Claptrap’s reputation and plays into that with the crap they put him through (like getting him stuck to a giant electromagnet). Borderlands has always been pretty self-aware, though. It always knew what it was and used that to the best of its ability, a true mark of the talented writers at Gearbox, and Borderlands 3 is no different. However, that self-awareness is done in a way that parodies current gaming culture and it by no means tries to hide it.

One of the areas I played through has the game’s antagonists Troy and Tyreen Calypso talking through the comms the entire time. As you make your way through the level towards the boss you hear chatter about Let’s Plays and ‘Livescreams’, which is an obvious tongue-in-cheek joke regarding the popularity of content creators and influencers of that caliber, as well as the personas that can be put forth to make that content more marketable and palatable. As a big fan of parodies and tongue-in-cheek humour, I really enjoyed the writing in the missions that I played, especially the one I just mentioned. The brilliance of Borderlands 3’s particular brand of humour is that it parodies a medium and an industry that have staying power, so its writing and its jokes will no doubt age far better than in previous games.

While I didn’t get to try out all of the final game’s four characters (I did get some time with Amara but I’ll touch on that later), my time with FL4K allowed me to see how this player character interacts with the world around them. I’ve been enjoying characters like BT from Titanfall 2 or Captain Holt from Brooklyn Nine-Nine lately; robotic and borderline-emotionless characters whose warmth and humour comes from playing off of the surrounding characters. It must be difficult to write a character like this amongst a roster of over-the-top, incredibly emotive and bombastic characters, but FL4K’s writing nails it. While not as placid as the characters previously mentioned, he’s still a stark contrast compared to the game’s standard roster, which allows for some very entertaining and witty remarks when talking to some of the sillier characters in the game. Character interaction looks to be another strength that Borderlands 3 is bringing to the table, let’s hope it sticks with it for the entirety of the game!

Borderlands 3’s most notable changes definitely come from its more modernised gameplay. The general gameplay is by far where the previous Borderlands games feel the most dated now; the gunplay/shooting mechanics combined with the limited movement sometimes means that while the game is moving at one speed, you’re moving at another. The games continued to feel slow as other games of similar design were affording extra manoeuvrability to the player, but Borderlands 3 changes that. Things like mantling/climbing up ledges as well as sliding means players have new avenues to experiment with, allowing for a really creative-yet-aggressive style of play that perfectly suits the mayhem that Borderlands 3 is going for. Add to this the retooled gunplay which allows for weapons that feel significantly more responsive and satisfying to fire and you have a recipe for success. Another big new introduction to the gunplay is alternate firing modes. A majority (but not all) of weapons from different weapon manufacturers have alternate firing modes which makes each weapon manufacturer feel even more distinct from one another. A personal favourite of mine is with Maliwan weapons, which can carry two different elemental properties to switch between with the alternate fire mode. Manufacturers like Hyperion may not have these alternate firing modes, but make up for it in other ways (like having a shield pop out when you aim down sights with the weapon). Borderlands has always aimed to make all of its weapons feel distinct from one another but with the third game they really have achieved it, giving the player the choice to capitalise on the inherent strengths of each weapon based on its manufacturer.

When it comes time to the ‘Catch-A-Ride’ vehicles, which remain a series staple, Borderlands feels just like it always has, if only a little bit driftier. The vehicle that I got to try really loves to drift all over the shop, and while it sounds like it can be a pain, it was actually pretty fun. There are a couple of changes to acquiring vehicles, however. Borderlands caught up with, well, a lot of other games, and now has vehicle boarding. Where it differs from most games however, is the usefulness of vehicle boarding. While you can just steal a vehicle and use it to get around, driving it back to a Catch-A-Ride system will see it scanned and broken down for parts, allowing you to customise your other vehicles to your heart’s content. Things like the chassis, plating and weapons can all be changed with enough scavenging. While I didn’t get to see if this is how you get other vehicles in the game, it wouldn’t surprise me if this is the case as that’s how the game introduces the mechanic to you in the first place.

After playing through the chunk of the game that was laid out for me, I moved onto cooperative play – the big ticket item for Borderlands and a series staple. For those that love to play couch co-op, Borderlands 3 allows for two-player splitscreen, or you can opt for four-player online co-op (co-opt, if you will). I played as Amara (the Siren), and my partner played as Moze, the Gunner. While it took me a little while to get used to Amara’s abilities after playing as FL4K for so long, once I adjusted and had quite a bit of fun with the devilish wasteland sorceress. The skill tree I used was built around buffing the player while the Action Skill is active, increasing a variety of attributes for the player and their co-op partner/s. Moze seems much more like a character to play if you like ensuring enemies stay dead. Her Action Skill which summons a walking tank named ‘Iron Bear’ that can be customised right down to the weapons it uses; do you opt for railguns to hit big things really hard or do you opt for faster firing weapons like machine guns to help with crowd control? Iron Bear is as useful as the player makes it, meaning that playing as Moze can equate to a very different experience for different players. Speaking of abilities, I’ll briefly touch on FL4K’s. I didn’t get to try out a whole lot of his abilities as I only got to level nine, but the tree that I did use was focused on the synergy between FL4K and his skag companion ‘Mr Chew’. The Action skill for this tree made it so that Mr Chew would warp through a portal and transform to a version of himself that had seemingly been injecting copious steroids in an effort to resemble a skaggy Arnold Schwarzenegger. Using its brute strength in this form, Mr Chew can tear right through enemies. If you invest in certain skills, you can synergise with Mr Chew so any damage he does causes you to regenerate your health and vice versa. Also, you can pat Mr Chew and he reacts by emitting a bunch of love hearts and behaving all excitedly, which is adorable and I love him.

Oh yeah, back to the co-op stuff. Learning from other games of its ilk, Borderlands 3 also brings in a ping mechanic as well as emotes – though the latter definitely does make the game feel more like a ‘live-service’ game. The area which we played in during the co-op section was Eden-6, a lush, jungle-like planet which is home to a bunch of peculiar creatures like the Jabbers (ape-like creatures that aren’t opposed to defending their territory). The environment was very pretty, with Gearbox’s artists doing an outstanding job at making a beautiful-yet-hostile landscape. This area was also home to one of the more entertaining side-quests I played, but I’ll let you experience that when it comes out.

All-in-all, Borderlands 3 is shaping up to be a smashing success and even a potential game of the year (though I doubt it’ll take that title over Sekiro, for me at least). With a slew of meaningful improvements, the game will not disappoint fans and newcomers alike. Though, if you’re one of those people that hated Borderlands, well you’ll probably hate this too (and I feel bad for you).