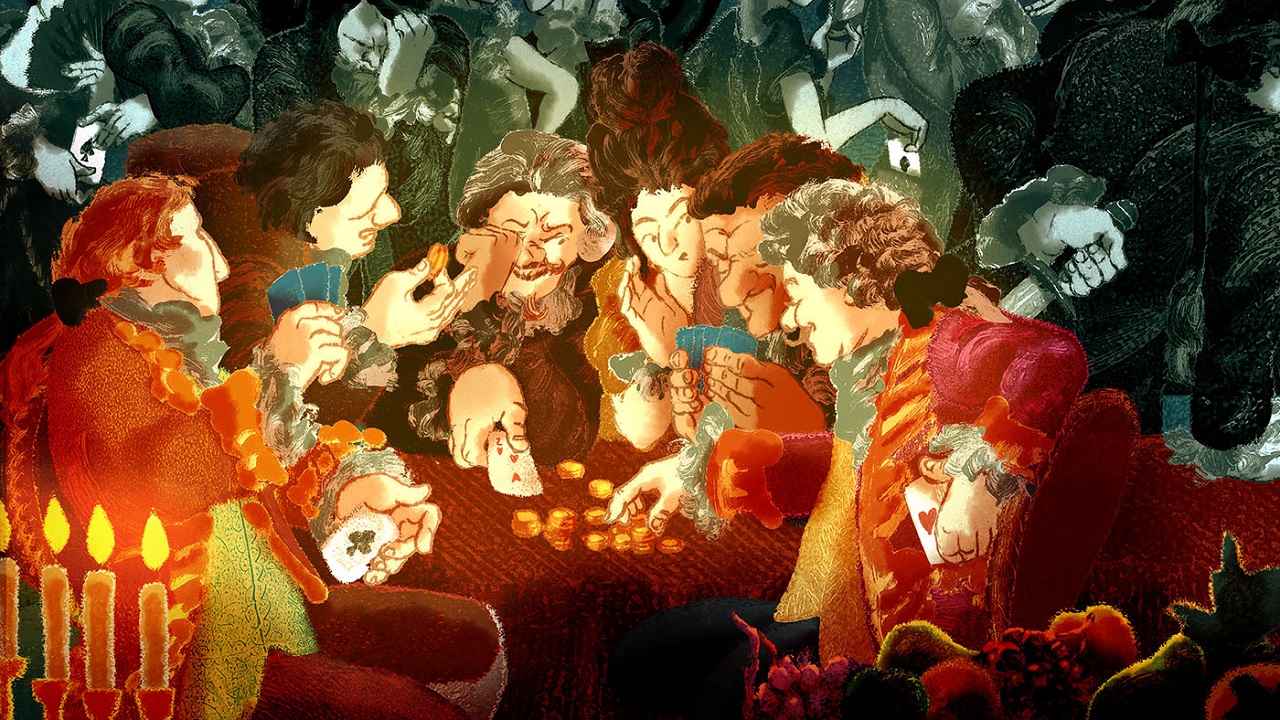 But here I am, submerged in the world of cheating at cards and loving it.

Card Shark is an experience entirely bereft of sharks, but thankfully quite well populated by cards and those that enjoy them. A charming tale that parades across historical France with a ragtag band of characters that take great joy in educating people about the danger of cards – for cheating, you see, is a learning experience.

Your shoes are filled by a mute young man, who upon a chance encounter with a gentleman named Comte de Saint-Germain finds himself the sudden apprentice in the art of deception. There is also the niggling issue of you having been accused of murder, but like so many worrisome encounters within this game it is nothing more than a misunderstanding – please, let me fill up your wine and we can move on from such a troubling thought. Cards, anyone?

And filling cups of wine you shall do in plenty. You see, the Count takes great pride in his craft – the parting of coins from their owners. And while a game of cards is fun, playing with an advantage is far more profitable. After the unfortunate murder incident he is more than happy to give you both a roof and a new vocation, passing on a magnificent variety of creating methods to fleece – err, ‘relieve’ people of their material wealth.

You start with an entry level trick – peering over the shoulders of players while you fill their cup, and dragging a greasy eyeball over their hand. You can then communicate what goodies they have by cleaning the table – swishing and swirling your cloth in specific ways that will tell the Count what he is up against. These actions are done through careful and deliberate inputs that feel a little bit like a WarioWare experience, carefully doing what is required while also being efficient enough to not arise suspicion. Lean over too far and spill the wine? People will call out more than ‘TAXI’. I mean, your first experience ends in gunfire.

Some tricks are pedestrian and simple – such as doing a hilariously ineffective shuffle – while others require a little careful thought in their execution. I won’t lie, I had a small pad next to my keyboard for the sake of remembering a handful of specific in-game actions that would communicate both card values and suits, especially as my window to bamboozle some more astute players would become a bit more narrow. One especially fun encounter type has you actually AT the table with the Count, assisting him by playing your cards in a particularly brilliant and communicative manner. Just wait until you sit down and play cards with Voltaire (yes, THAT Voltaire) and come to realise you are about to fleece the poor bastard for all he is worth.

While I started with a mouse and keyboard, I quickly found that using a controller felt a great deal more natural for directing my scandalous fingers. Like a kid playing a stacking cup game, my ability to cheat and master timing was more at home with button presses and control stick manipulation. It just felt more…cheaty.

Tell me this isn’t a great band name

While the myriad methods of manipulation form the rich and gooey core of the game, it could have been unbelievably easy to simply wrap it up with some generic aesthetic and release this bad boy. Instead the development team at Nerial have delivered a super impressive visual style, and a narrative that captures some fun foreign intrigue and conspiracy.

This all does some marvellous work to bring the baroque characters and world of Card Shark to life. Even the fact that your character is a mute comes to great effect, as the majority of conversations will prompt you with simply selecting from a range of facial expressions to communicate your position on the matter – from a smug grin, right down to troubled shock and awe. Even the smaller, easy to miss aspects of the games storytelling devices have had special consideration to ensure they are authentic and true to the title’s nature and characters – such as when I decided to delve a bit deeper into the games journal, a recap device to collect the story so far.

Ol’ mate is positively thrilled to be swindled

At the start of the game, the Count clearly identifies that you are an intelligent, albeit uneducated lad. As you progress through the myriad of cheating tutorials the game offers (and believe me, there are a lot – a necessary evil given the technical nature of winning cards by dishonesty), you realise that at the end of every cheating lesson, the Count will then mention what aspect of your schooling he will assist you with. These scenes are not shown, but are played before a fade to black and you begin your next opportunity to scam. Imagine my surprise, when I could actually track the improvement of my character’s education throughout the journal – clearly seeing an improvement in spelling, grammar and writing overall. A positively minute detail in the grander scheme of things, but the kind of garnish that makes the dish better overall.

After many hours played, and countless cards earmarked and seeded into badly shuffled packs, I still found myself with butterflies in my stomach as I approached the next mark. As the stakes got ever higher, and we discovered dirty secrets from the most influential in France – I had to reflect on just how much the game had allowed me to embody a true card cheat. I found myself idly Googling the terms within the game, to see them performed by real masters, and this only highlighted how well the game had presented the tricks within. Really the only disappointment came from the fact that your coin purse, while swollen, does very little in the grander scheme of things. While the narrative progresses (and is fun!), your own cashed up self doesn’t really impose any unique impact on the world. You are along for the ride – but it’s a fun, clever, and at times scary, ride nonetheless.

Far right expression kind of captures how I feel most days

Across my journey with Card Shark, I amassed ill-gotten wealth and discovered amusing (and alarming) characters that uncovered a tale with exciting twists, full of pompous aristocracy and political intrigue. While the game does request your full and proper attention to achieve the very zenith of your trickery, you’ll feel incredibly accomplished at what skullduggery you can achieve. 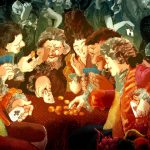 Card Shark Review
In France It's Called A Royale With Cheat
It’s the most fun you’ll have from a comfortable vantage point of shuffling cards and pouring wine.
The Good
Positively charming aesthetic with gorgeous visuals
18th-century France is equal parts exciting and concerning
Creative mechanics bring serious joy to swindling people
It probably teaches you how to cheat like a pro in real life too
The Bad
Some narrow margins for error
Endless tutorials are a necessary evil
8
GET AROUND IT

Card Shark Review
In France It's Called A Royale With Cheat
It’s the most fun you’ll have from a comfortable vantage point of shuffling cards and pouring wine.
The Good
Positively charming aesthetic with gorgeous visuals
18th-century France is equal parts exciting and concerning
Creative mechanics bring serious joy to swindling people
It probably teaches you how to cheat like a pro in real life too
The Bad
Some narrow margins for error
Endless tutorials are a necessary evil
8
GET AROUND IT
In this article:Card Shark, Cards, devolver, devolver digital, Nerial