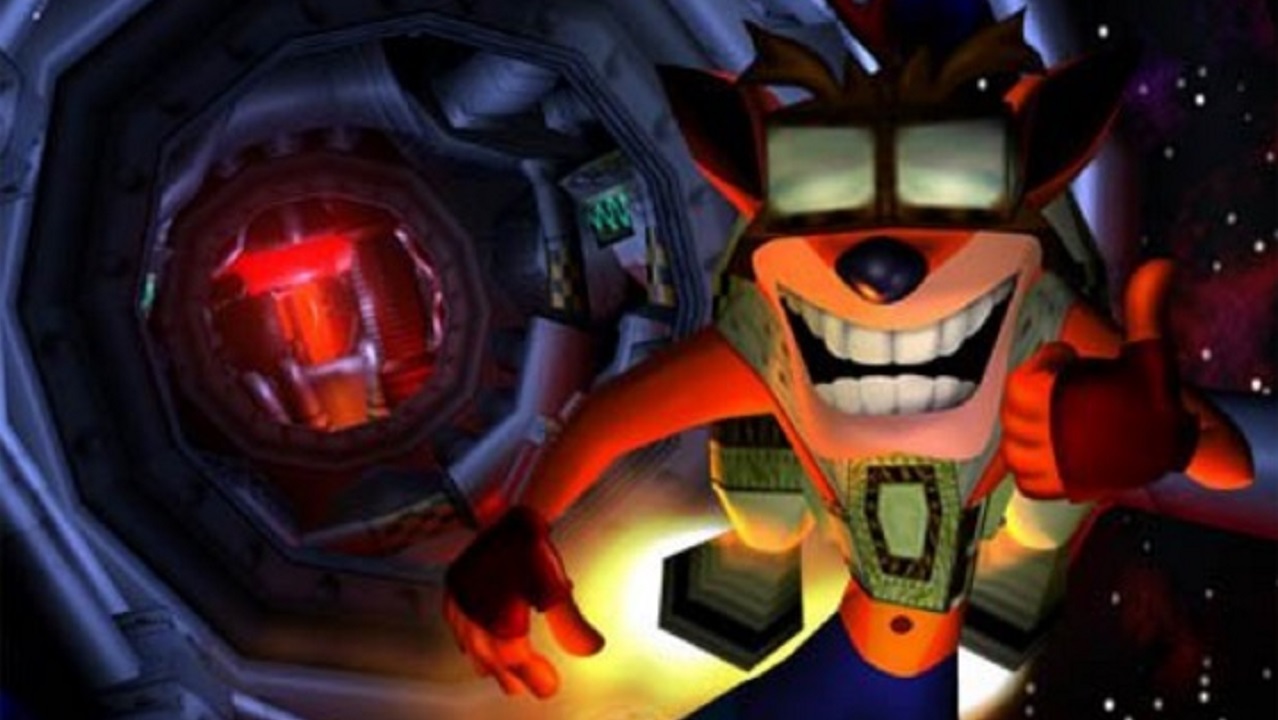 A sequel to Crash Bandicoot was always going to be a showstopper. Crash had been universally praised when he first arrived on the PlayStation in 1996, making him the perfect mascot for Sony’s upstart console. That sort of attention almost never comes without its consequences; work on Crash’s sequel began almost immediately after the game’s release, in October of 1996.

Despite developer Naughty Dog having 13 months development time with a mere 14 employees, Crash Bandicoot 2: Cortex Strikes Back was a tremendous upgrade. There’s no denying the first game’s spot in the original trilogy’s hierarchy – the very bottom – but Crash 2 is often ranked lower than its 1998 successor, Crash Bandicoot 3: Warped. This should not stand, for Crash 2 is the tragically early peak of the PlayStation’s trilogy of best-selling platformers.

Cortex Strikes Back launched in the late months of 1997, instantly becoming a runaway hit. By February of 1999, it had moved just over four million copies. The improvements to the original’s gameplay loop were evident from the word ‘woah’; Crash 2 controlled much better, had way cooler levels, and was praised for its graphical fidelity. The two former factors, though, are what make Crash 2 stand out as the series’ peak.

Crash gets one vital new button input that radically changes how the game is played. By pressing Circle, Crash will crouch and/or crawl. Do it while jumping, and Crash will perform a belly flop. No, Crash doesn’t seem to think it’s painful. Do it while moving, though, and Crash will perform a slide – which can be combo’d into a higher jump. This new movement ability makes Crash 2 a wildly different experience than the first game, but it gets better. If timed perfectly, Crash can combo it and his iconic spin attack to essentially never lose the slide’s momentum. He can also time a spin with a sliding jump to travel higher than a normal sliding jump. These may be glitches and not intended features (as far as I know), but speedrunners never mind such formalities. Just check out this (former) world record to see this beautiful abuse in action.

This upgraded basic moveset – jumping, sliding, body slamming, spinning – still remains the optimal Crash Bandicoot moveset. Nearly every game in the series follows it to a tee, with any changes being minor tweaks.

Enemies were now tougher than ever before, but almost all are defeatable

Crash 1 boasted a wide variety of level designs and mechanics but Crash 2 expanded upon it dramatically. Moving platforms and other environmental hazards were retained, but slippery ice and thick mud (among others) were added. Level variety was expanded as a result, without creating large gaps in the gameplay loop. The late-game levels Bee Having and Diggin’ It even have Crash burying himself into the ground to avoid almost invincible bee enemies and bomb-spitting piranha plants!

These new and improved level designs can thank Naughty Dog’s improved level creation toolset for their existence. Crash 1’s levels were ‘the most significant bottleneck’ of its development. By streamlining their resources, level creation became more complex during Crash 2’s development – albeit not taking any less time to make. In fact, around 80% of Crash 1’s engine was remade entirely for Crash 2. You can absolutely see the difference between those two games, but the difference between Crash 2 and 3 is less obvious.

Of course, all of this isn’t to say that 1998’s Crash 3 isn’t a great game as well. Naughty Dog pulled off a doozy with only nine months (and eight days) of development, but any timeframe that claustrophobic is bound to rush genius. Crash 3’s objective improvements were in graphics; Crash’s model in Cortex Strikes Back had ‘over 9000 individual frames of animation’ at 30 frames per second. In Warped, however, ‘Crash had around 30,000 frames’. In other respects, though, Crash 3 isn’t really an improvement. It may be a damn fine game, but it’s hardly the peak of the series.

Its ‘upgrades’ from Crash 2 are summarised in two buzzwords of the late 90s: ‘Replay value’. Graphical fidelity was increasing at an unprecedented pace, and the CD-ROM allowed more stuff to be put into games than ever before. Sequels to hit games were still required to be bigger than their predecessors, but the rules for 3D gaming were still not set in stone by 1998. While Crash 1 shared a birth year with 3D gaming bibles Super Mario 64 and Tomb Raider, three-dimensional ‘norms’ wouldn’t be set until the next console generation. Thus, 3D sequels more often than not attempted to pad out the gameplay loop, as opposed to expanding upon it. In these days of the indie game renaissance, with focused and polished experiences once again at the forefront of gaming, these kinds of iterations tend to lose a lot of their lustre. Crash 3 has definitely not aged all that well in that regard.

Crash 2’s new mechanics never interrupted its core gameplay loop, and those that did were confined to brief interruptions. When they did have their own level, they were few and far between. We won’t discuss the bosses here, because it’s naturally assumed that they offer sufficient changes to the gameplay norm. In Crash 2, there are only three bear-riding ‘Polar’ levels and two jet pack levels out of a total of 27. The waterboarding and hanging sections were just that; smaller sections of certain levels. By contrast, Crash 3 features two underwater levels, two tiger-riding levels, three aeroplane levels, four motorcycle levels, and four jet ski levels out of a total of 30. Half of Crash 3’s levels don’t use its core gameplay style, which is simply too many interruptions. These levels vary in player enjoyability as well; I can guarantee you that there’s ample debate to be had about the merits of those underwater levels by themselves. To get stuck into Crash 3’s gameplay loop only to be torn away from it to play a mediocre aeroplane level is personally frustrating, and I pray that I’m not alone.

Crash 3’s powerups also bog down the overall experience. While Crash 2’s level obstacles were all conquerable by mastering the core movement set, Crash 3 bloats its later levels with its emphasis on powerups. The Super Belly Flop changes absolutely nothing. The Double Jump isn’t nearly as satisfying to use or as sharp as the slide jump, and the Death Tornado Spin is essentially only used to extend these jumps or avoid having to time normal spins. The Fruit Bazooka makes earlier levels obscenely easier and isn’t used in any interesting ways, and the Crash Dash (like the Super Belly Flop) also changes nothing. ‘The animation and moves are identical to those in Crash 2’, states a Game Informer feature from October of 1998. ‘This wasn’t a bad thing necessarily, but it made us think this game was more of an update than anything else.’

I want to talk about the Super Belly Flop and the Crash Dash. The former is the very first powerup you receive, allowing you to break armoured boxes.

These boxes are functionally identical to Crash 2’s armoured boxes, and don’t show up until after you get the powerup, so why make them require it at all? Crash 2’s were already only susceptible to belly flops; making it ‘super’ doesn’t actually change anything. The Crash Dash (the last powerup you receive) is there to make Crash 3’s new Time Trial mode easier…but all it does it artificially lower the best times. The powerup only makes Crash run faster, without any control penalties to give it a skill ceiling. If the powerup didn’t exist, the times would still be beatable but challenging. Hell, the dev times would probably be harder to beat because players would have to truly master the game’s deep movement mechanics – and even the glitches used by speedrunners.

This is not so in Crash 2. As in Tomb Raider, the challenge come from ever-increasing complexity in levels. Just as Lara Croft can jump this high and this far for the entirety of the game, the player must make the most of Crash’s moveset to navigate ever-harder levels. It helps that Crash 2 doesn’t have powerups that discourage exploration of these movesets. Why bother learning to spin jump when you can just use your Double Jump?

In a Crash 3 making-of video from 1998 (see below), it’s revealed that the large number of non-traditional levels and powerups were implemented to add ‘excitement’ and ‘depth’ respectively. There was a great deal of ‘pride’ in the powerups ‘need[ing] to be used in combination’, which is bogus when you consider that only two (three in but one instance) powerups are ever used ‘in combination’. The whole thing just reeks of a short development time stifling creativity in a race to top a series’ peak for the 1998 holiday season.

And that’s the tragedy behind Crash 2’s peaking. The series simply fulfilled its own dreams too early, making its threequel seem lacklustre in retrospect. The circumstances of early polygon gaming didn’t help, nor did the ever-smaller development timelines. As the series fell out of Naughty Dog’s hands and was passed from developer to developer – a process current ND president Evan Wells described as ‘a little bit like watching your daughter do porn’ – its connection to its roots faded until there was nothing left. Ironically, it took the N. Sane remasters of the original trilogy in 2017 to bring the orange bandicoot back into relevance.

Crash Bandicoot 2 is almost never bogged down by powerups or mixed vehicle riding, and untainted by the ravages of a brutal industry. That’s why it’s the peak of the original Crash Bandicoot trilogy. It’s a simple, clean and polished experience that can be leisurely completed in a single day. It’s a game that I play through every year. It’s the best Crash Bandicoot game ever made and should be recognised as such.