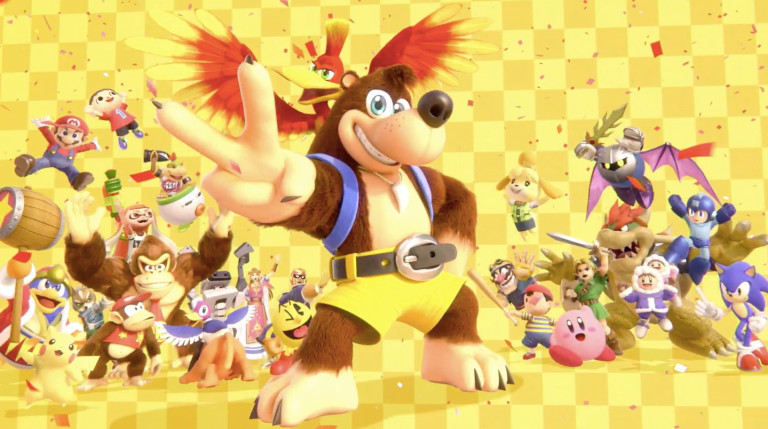 Nintendo revealed not one but two new playable characters for Super Smash Bros. Ultimate in their E3 2019 Direct, with Banjo-Kazooie and Dragon Quest’s Hero announced for release later on in 2019.

The Hero from Dragon Quest was announced at the beginning of the show, with the protagonist from Dragon Quest XI first appearing to join the battle. This would make sense seeing as he is the latest incarnation of the Dragon Quest Hero, but the trailer quickly revealed that the Heroes of Dragon Quest III, Dragon Quest IV and Dragon Quest XI are also playable, most likely as alternate skins rather than Echo Fighters. Dragon Quest’s Hero will come bundled with a stage and Dragon Quest series music tracks later this year, you can purchase him standalone, or you can nab him by purchasing the Super Smash Bros. Ultimate Fighters Pass, which grants you access to 5 Challenger Packs.

This wasn’t all however, with Nintendo 64 icons Banjo-Kazooie revealed towards the end of Nintendo’s brilliant E3 2019 showing. The Bear and the Bird Duo look right at home among the Smash roster, and thankfully they have an art style reminiscent of the original game (see you later Nuts and Bolts redesign). Gameplay showed Banjo and Kazooie utilising iconic moves from the original games, with their Final Smash being a reference to the demise of Gruntilda in the final boss battle of Banjo-Kazooie. Banjo-Kazooie will come bundled with a Spiral Mountain stage and series music tracks at the end of this year. Like other DLC fighters you can purchase Banjo-Kazooie standalone or in the aforementioned Fighters Pass.

Dragon Quest’s Hero and Banjo-Kazooie are set to join Smash in 2019. For now why not watch their reveal trailers below: