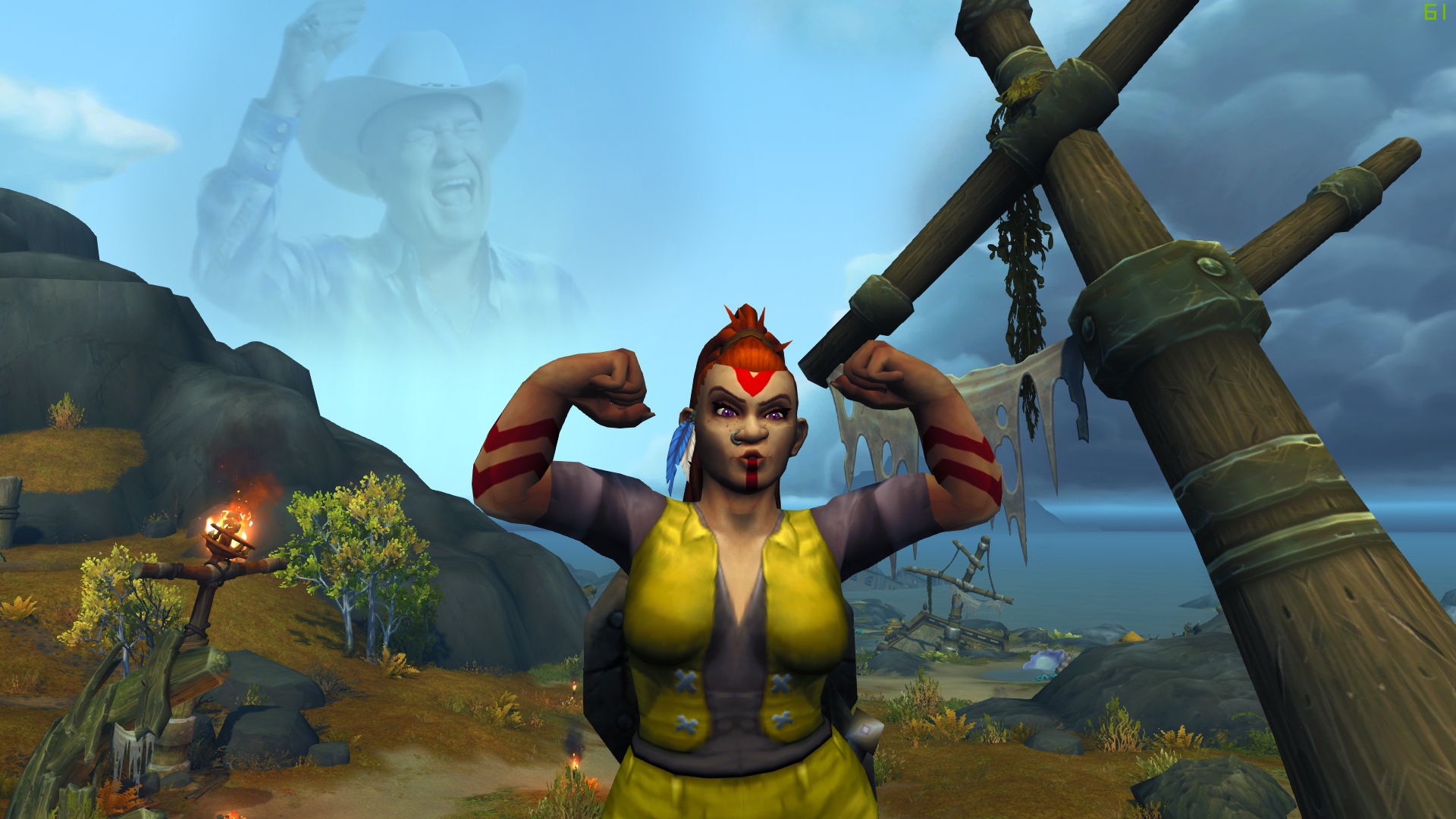 My name is Ash, and I am a booster.

Yes, I am willing to admit it – for years now I have been a fiendish booster. My patience with the World of Warcraft levelling experience has waned, and my weak willpower started to lead me down dark pathways…that all lead to max level.

And the lies I would tell myself. The EXCUSES. “Oh, I will pay for a boost because I need a tank character for the guild.” Out came the credit card, and suddenly I had a level 100 Tauren Paladin. The shame. Or, “I have put in enough levelling effort, there’s no harm in paying some gold for someone to run me through dungeons for a couple levels.” I was fooling nobody.

All fun on the high seas! Nothing bad ever happened on a boat, right?

I was preparing for World of Warcraft: Shadowlands by getting a handful of classes to max level – so on release day I could pick whatever might best fit in with my friends. But levelling – I was over it, and did not want to admit it to myself. Every new character I made felt like a personal chore…the ‘Enter World’ button had to do some work to convince me to press it.

Thankfully, Blizzard has been kind enough to implement all manner of goodies to get my newbie groove back on, starting with a tasty experience gain boost, a big shuffle on how levelling should work – and finally, a brand new starting experience that gets you feeling nice and heroic real quick. And I was lucky enough to have it explained to me by Kevin Martens, the Blizzard gameplay designer that helped make it happen.

Exile’s Reach is a brand new starting chapter to anyone’s WoW journey, available as an alternative to the existing storylines that have been a staple of Azeroth’s world for 16-odd years. Back in my day, every night elf would take its first steps beneath the lofty limbs of Teldrassil – the world tree they all called home. EVERY orc would go hunting for ‘cactus apples’ (whatever the hell they are) before they took their first steps into Durotar. Sure, you could always run your level 1 arse to some other corner of the world and try a change of scenery – but the effort to reward ratio was heavily skewed by way of many, many deaths. While these starting experiences had a strong individual faction narrative, they did very little to unify you and your mates (unless of course you all rolled as Night Elf or Orc together).

With Exile’s Reach however, you can jump on board a guided narrative experience that introduces you as the newest recruit to either the Horde or the Alliance, making your way to the frontlines to aid in the war effort. After a quick drill on how the basics of your chosen class works, you end up shipwrecked on a mysterious island where trouble is afoot. So begins the tutorial proper, as you start to navigate the perils within the World of Warcraft.

Herein lies the genius of Exile’s Reach – it’s an open invitation. Every player of every race can create a brand-new low-level character, and team up to take on the wicked wilds of the landscape. For the die-hards, their cactus apples and world trees will always be there for their personal narrative – but for friends ready to unite together from the very first step, Exiles has them covered.

Kevin shared some great insights on what lead to the necessity for a platform like Exile’s:

A new player experience is a category that we use to cover a lot of different elements of the game. Some surprising features came out of this. The idea was basically that your mileage varies greatly depending on when you start and which race and class you choose, where your friends are, et cetera. Very often, you would feel like you were left behind. If you joined the game at this stage, it felt like you could see all of this stuff on the ground, but the parade was somewhere miles and miles ahead of you, depending who was playing that day. It might be really lonely, and, considering that there are so, so many players in the game, they tend to be structured in the current expansion or grouped up in the current endgame or the current patch content.

This was a…high point of my experience. *snicker*

The feeling of ‘missing out on the grand event’ is all too true with how World of Warcraft has changed its storytelling over the years. A newer player discovering the game is all too surprised to find that the many weird and wonderful things their friends have described are quite absent from the initial levelling experience, when they start their fervid search for cactus apples. The individual narrative may not have the initial draw that it did all those years ago, when the wonder of WoW was far more grand to all and sundry. The larger portion of the playerbase (by today’s standards) are hardened veterans – so convincing them to come and help you find cactus apples may be a hard sell.

But a wicked romp across a strange new island, where some Ogres are practicing dark magic to resurrect a dragon?? With no hearty trek to see each other – you simply rock up on the beach together and start the ride? It’s a much easier notion to convince a mate; and at the end of the journey you enter the World of Warcraft proper with freshly-minted level 10 characters ready to take on the world.

It’s a fantastic option for players to choose. It’s a brilliant implementation, because it has added to the game without compromising anything that came before it. There has been much gnashing of teeth and forum-based whining when any established WoW system is changed in some way – even when the changes seem to be entirely positive, there will be a shadowy minority of people that perhaps enjoyed what others considered grating and irritating. Kevin echoed the sentiment made by those who may be fiercely protective of their cactus apples:

So we wanted to not get rid of any of the things that made people love WoW to begin with – many of us know people that met in one of these starting zones. We didn’t want to just cut them or redo them all from scratch. And we certainly discussed all of that, but we want people to have a good, modern social experience. So, a brand-new starting zone where new players would be sent to automatically – but you could still play all the other ones if you wanted to – felt like the right choice.

*Wipes tear from eye* We did it Jimmy….WE DID IT

So my time within Exile’s Reach was one of discovery. As someone who has played World of Warcraft for a healthy portion of its 16-year lifespan, it was not so much that I was finding new motivation – rather than I was in a position to feel old passions reignite. The idea of making new characters with friends and discovering new ways to play felt accessible to me again, in a way that I had not really felt in many a year.

It brought back the social aspect of the massive multiplayer world, which had diminished under my own jaded-ness for quite a while. I felt a new breath in the ‘world’ of World of Warcraft – and I hope it does the same for you too.

In this article:blizzard,world of warcraft