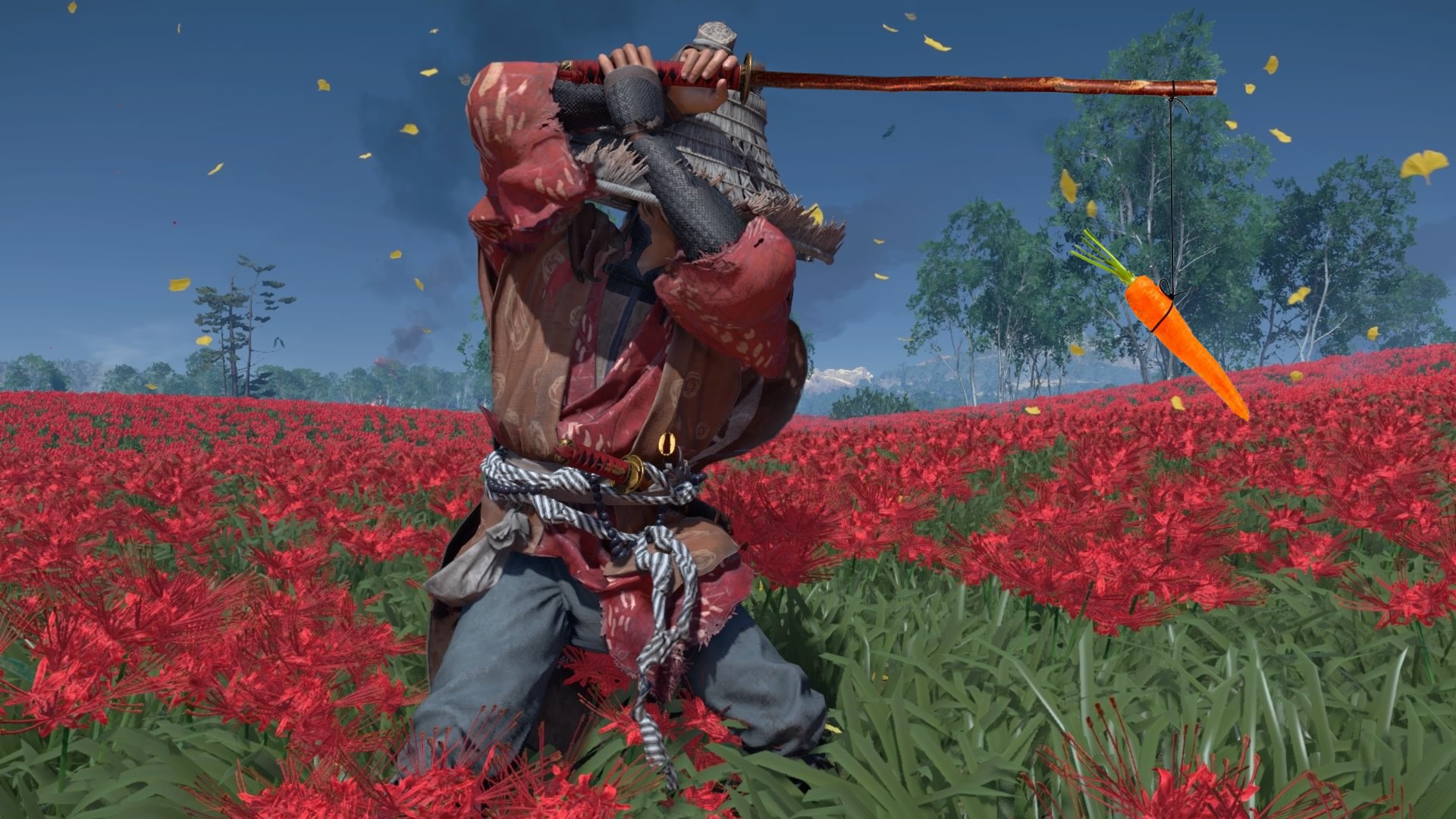 “Hurry up you stupid fox I’ve got chores to do”

Sucker Punch’s Ghost of Tsushima has been in the wild for under a week, and as a big-ticket PlayStation exclusive it’s got plenty of chins wagging. It’s currently sitting on a very healthy 83 on Metacritic, and perhaps craziest of all is the extremely high user rating of 9.2 (don’t forget that if you disagree with that score you can go to Metacritic and give it a 0 to balance things out as you see fit). The praise is well deserved. GoT is probably one of the best looking open-world games I’ve ever laid eyes on, featuring a breathtakingly beautiful rendering of feudal Japan that is poetry (mostly haikus) in motion. The combat is also a stunning ballet of fluid brutality, and I relish every opportunity I get to stab a Mongol or two while traipsing around the gorgeous countryside.

But let’s not kid ourselves here, GoT is in many ways mired in the same cavernous pitfalls of so many open-world action games. You may have played the game for five hours and are still marvelling at the countryside, slowly mastering the art of the katana and bow and hungrily chasing down sidequests and activities to bolster your techniques. But does this giddy sense of discovery and progression sustain itself past the ten-hour mark? The fifteen-hour mark? The thirty-hour mark? How many slow-arse foxes will you chase before you start wanting to put an arrow through one? How many terrible haikus will you write in order to gain a headband you probably won’t even bother to look at? How many times will you happily endure watching Jin Sakai’s bum slink sensually into a hot spring? How many same-faced peasants will you free from captivity only to sit through a cutscene that is as uneventful and pointless as it is unskippable and infuriating?

Can we wrap this up, fox? I’ve got a lot of haikus to write

I feel like spiritually I am about halfway through the game, but I also feel that much of what GoT has left to show me it’s already shown me before. I have every upgrade I need and every technique I’m likely to use. I regularly let large pools of technique points sit there until I can be bothered to spend them, and I collect charms like they’re candy but rarely bother to look at their benefits because I simply don’t need them. The carrot on a stick was devoured long ago, and my stomach rumbles loudly once more.

Much was said leading up to the game’s release about letting the world tell you where to go, and in fact I absolutely love the HUD-less display where I can simply go where the wind (literally) takes me without the screen clutter that is so common in open-world games. But is fighting Templars and wielding magical fruit the point of Assassin’s Creed? Is deposing tyrannical autocrats in exotic locations the main thrust of Far Cry or Just Cause games? No, just as GoT is not truly about repelling the Mongol invasion, all these titles are at their heart about clearing a map cluttered with icons.

Perhaps I’m being overly dramatic here, and in fairness I’m really enjoying my time with GoT, but the repetition of the tasks and the diminishing returns for completing them are detracting more and more from this incredibly beautiful game. GoT unabashedly embraces all the tropes of the open-world action game, a genre that is increasingly looking very tired indeed.

The two answers to the problem of the thoroughly fatigued open-world action genre are simple in theory, but difficult in execution. Firstly, if an open world has an interesting setting and a solid overarching story to match then it’s easy to overlook some repetition in its mechanics. This is true of any game really (for many the original The Last of Us would be a case in point), but infinitely harder when your world is open and players are given free rein to carve out their own experience. In an open world the player is far more likely to stray from the narrative path than in an artisanal linear experience, and once you spend enough time throwing cheese wheels down mountains it’s easy to forget about going to meet the Greybeards. While it’s got a cool samurai flick of yore style and flourishes of interesting story ideas, GoT doesn’t really have the narrative chops to stand with the big boys like Horizon: Zero Dawn, so that warship has kind of sailed.

The second method of injecting longevity into formulaic design is far more attainable – deep and meaningful persistent RPG mechanics. Developers have been making ludicrously long open-world RPGs since the dawn of time, and the key to getting a player hooked enough to willingly sacrifice hundreds of hours is to give them a sense of burgeoning power, and difficulty that scales constantly over a game’s runtime that provides a sense of achievement. Even playing GoT on Hard, between the woeful enemy AI, cheap smoke bomb triple assassinations and myriad of unblockable attacks I seem to now have, I feel like right now I could probably take on the entire Mongol army singlehandedly. It seems like open-world action games like GoT are content to simply dabble with RPG-lite mechanics, with not enough attention given to how that progression will balance itself over the game’s length. The need to perform sidequests and activities to gain experience and build your character dwindles as the game stops demanding that you grow and adapt; you end up simply going through the motion of clearing the map of icons because it’s your job and that’s how games work. It’s a shallow design in many ways, and undermines even the most beautiful of open worlds.

Roses are red, violets are blue/ Time for a samurai to rock a haiku

Funnily enough, a franchise that managed to reinvent itself after reading the writing on the open-world action game wall was the very one that helped forge the mediocrity of the genre through painfully rote empty checklist gameplay: Assassin’s Creed. Odyssey was the first Assassin’s Creed game I even considered playing in a long time, because it had promised me it had changed. And to its credit, it had. Levelling, skill trees and gear drops all worked together to make a compelling tapestry of RPG mechanics that remained entertaining throughout. While its open world pales in comparison to the staggering beauty of Tsushima, it was an open-world action game that stopped mucking around with RPG mechanics and just gave into them fully. Perhaps it was simply aping the success of The Witcher series which it now has more than a passing resemblance to, but no one is likely to say that the change in direction wasn’t the freshest breath of air in one of the stalest franchises known to gaming.

On a sheer technical level GoT is an amazing feat. No open-world game I can recall has ever looked or felt so incredibly tangible. I didn’t think I’d be one of those guys who strays from the objective path to simply enjoy running through a field of purple chrysanthemums while watching the sun set in the distance, but here we are. Additionally, despite some balance issues and hokey stealth, combat is good bloody fun, and I am yet to tire of skewering Mongols and bandits. But the fact that GoT has such an incredible setting in which to stylishly murder people at sword point, yet insists on bludgeoning you with repetitive, unimaginative and ultimately pointless rote open-world faff is evidence the genre in general needs a rethink. We’ve come a long way since climbing radio towers, let’s not go back there.

Also, collectibles can go die in a fire.

In this article:carrot on a stick, death by a thousand haikus, ghost of tsushima, Jin Sakai, sexy hot springs, sucker punch