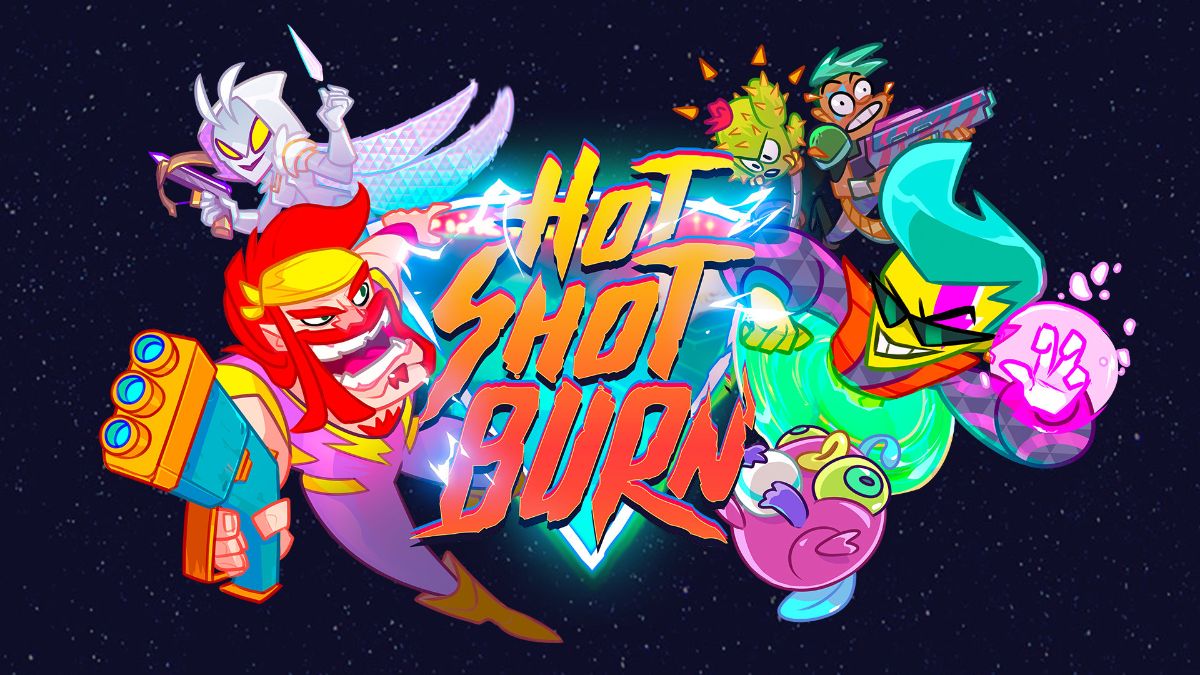 Friendships are overrated – I am always in the market for new and improved ways to irreversibly destroy them. Hot Shot Burn may well be the next logical step in my journey to die sad and alone. What better way to crush the happiness of a childhood friend than to impale him with the spikes of a sentient cactus? Or perhaps yeet a sick KOBE fish egg off a wall and into his unsuspecting face?

Hot Shot Burn is a competitive multiplayer ALMOST twin-stick shooter that mashes together the whimsy of Saturday morning cartoons with the character-driven gameplay of a title like, say, Overwatch. Pick your particular person and prepare to perforate the other poor persons – simple, right? Therein lies the game’s sinister depth, in the sense that the fiendishly simplistic gameplay offers a ton of room for sweet moment-to-moment gameplay that just leaves you going OHHHHHHHHHHHHHH YEEEAH.

Each colourful character has a ranged attack, and a unique ability. The ranged attack (usually some form of gun) will be your main source of stopping power, and each dude will have their own rate of fire, range – even reload speed. Your unique ability however will be an entirely different beast. Want maximum offense? You could always play Dr. Peakl, who seems to be some sort of…anthropomorphic gherkin cactus…who can fart out a ring of deadly spikes around himself creating the ultimate (deadly) safe space. Maybe you need a little defense in your life to dodge the odd lifetaker? Lock in your fishy friend Umad (no, not a joke) and enjoy being able to inflate for a moment of invulnerability during a particularly sticky situation. Using your unique ability at the right time can turn a tussle around in a heartbeat, stealing a win or clutching your way out of a real dog of a time. 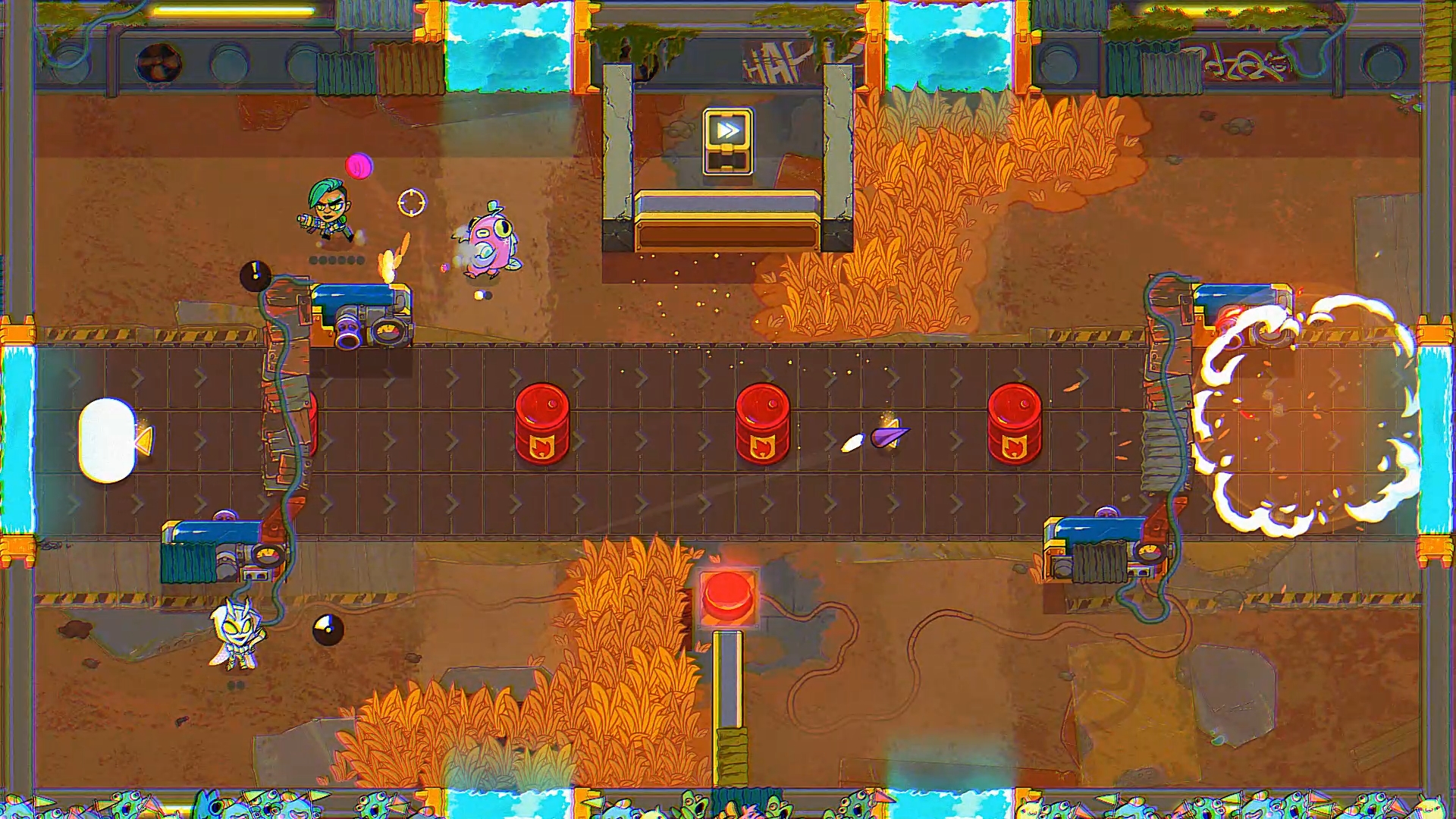 One thing I enjoy a great deal in Hot Shot Burn is that the game has some unique ways of racking up points if you are not doing so well. My first couple of games definitely saw me trying to figure out my dude’s unique ability and subsequently getting a tightly smacked bottom, so I started to play a little safer and focusing on collecting nachos – tasty little morsels scattered around the arenas. These tasty buggers give you points for the end game leaderboard, so even if you aren’t slayin’ like a pro, at least you are making progress. After a few more rounds (and many a nacho) I started to hit my stride and got a particularly sweet double kill on one of the leading players, giving me a huge point score combo that tied nicely into my nachos and elevated me into second position. Oh yeah, everything was coming up Milhouse. Even if you aren’t snarfing nachos, you can still get some sweet pointage for doing smaller feats like surviving for as long as you can, etc.

As part of your nacho hunting adventure, you will want to become familiar with the game’s varied arenas – each of which has its own unique gameplay hook to keep you on your toes. Simple mechanics like hiding in bushes to lurk and strike at unsuspecting foes couple with super-fast conveyor belts for ultimate drive-by action, but these are small potatoes! We have dealt with bushes and conveyor belts in other games! How about walls that ricochet your bullets? Does that do anything for ya? What about shoving an exploding barrel through a teleporter to frag your enemy from the opposite corner of the map? Yeah, now we are talking. One particular map offers a powerup that gives you a flat out aura of death, allowing you to simply touch someone to slay them – but you need to grab it from a platform that has a habit of electrifying itself and becoming a literal zone of death. Risky business indeed. The teleporter gameplay is perhaps some of the most nose-snorting experiences I have ever had in a game, with plenty of laughs had by all. Banking a huge shot off a ricochet wall, to see it blitz through a teleporter and plink the current kill leader for mega points genuinely saw every single person in the lobby yelling into their mic like it was a sports event – the hype was genuine, and it was awesome. 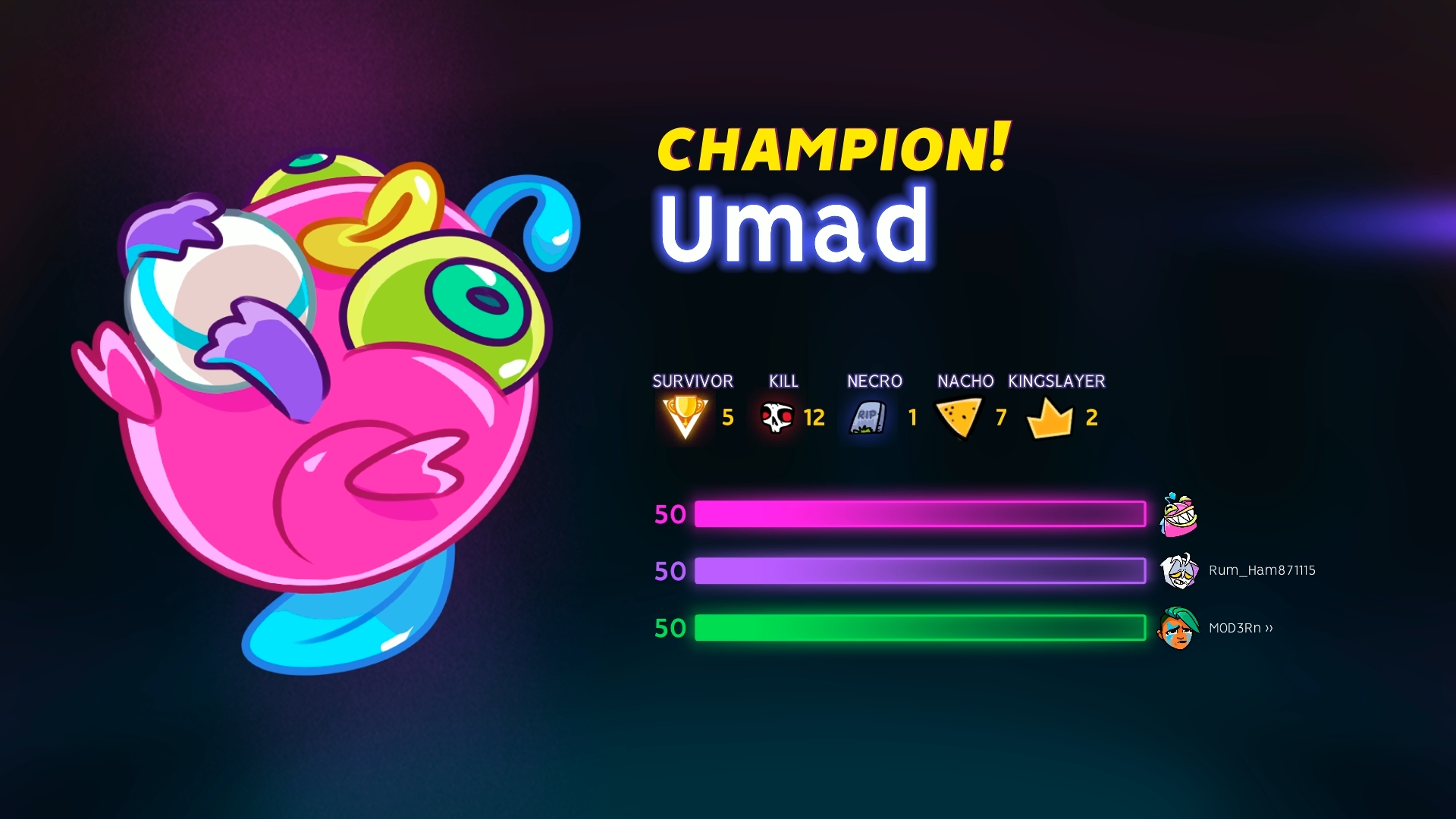 Yeah I bet you thought I was kidding when I said a character was named ‘Umad’ eh?

Hot Shot Burn is a game that takes its core gameplay experience and makes sure it is as tight as can be. It takes scant seconds to pick up how it works, and just a few more rounds will see you start to piece together some seriously exciting tactics that could only exist in a title like this. The neon colours and blisteringly fast rounds leave you hungry for JUST ONE MORE GAME, and the fact that it comes right out the gate with online matchmaking means that long after your friendships are nothing more than withered, destroyed husks you can take the fight beyond your couch and start fishballing people you don’t even know.

Hot Shot Burn blasted onto Steam Early Access on August 16, with plans to hit up console versions across Xbox One, PlayStation 4 and Nintendo Switch in the future.