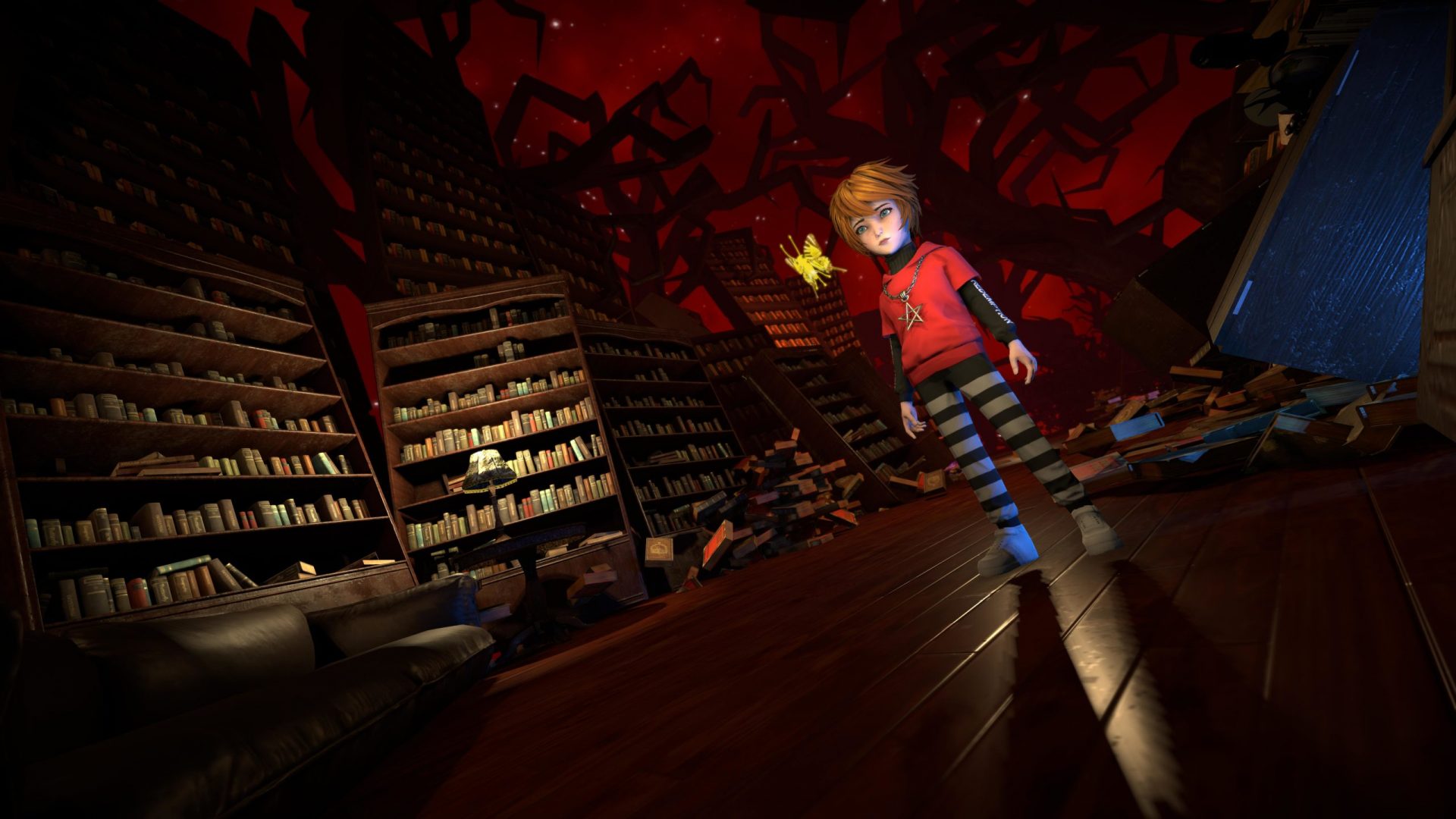 Hide and seek stealth is possibly one of the most difficult mechanics in gaming to do well. Since the dawn of time, games have sought to enable the player and let them live their power fantasies, so for a game to deliberately take that away from you is somewhat a departure from the norm. Some games have done it with aplomb; the Amnesia series, Soma, Outlast and Aliens Isolation have all managed to incorporate such a mechanic and make it fun. Others, like Sanity of Morris, have taken every bad element of the mechanic and cranked them up to 11. In Nightmare is unfortunately firmly in the latter camp, seemingly hell-bent on sucking whatever small joy is left in your life by committing every hide and seek stealth sin in the book, and even inventing some new ones.

Welcome to the house of fun

The entirety of the game is played within the sad and twisted mind of young Bill (short for Billy I guess), as he relives the traumas he suffered as a small child. Divorce, neglect, bullying and fairy-tale levels of step parent abuse are all things that Bill has had heaped upon him at an impressionable age, and as a result he’s a bit of a mess. The thrust of the games has you confronting various aspects of his fractured psyche to pull himself out of the nightmare he’s stuck in, and perhaps give the poor little sucker some internal peace.

The story is fairly garbled in its execution, filled to the gills with spelling mistakes and wobbly grammar, and it leans heavily on oft-ambiguous interactions with ghostly apparitions of Bill’s past. Text-based info dumps from various letters and items found throughout the game make it fairly clear though – Bill has had a rough trot. I like the idea of games tackling mental health issues, and anyone who knows me will absolutely affirm I am a sucker for a poor defenceless child story, but even for my tastes this one is a bit overwrought. So many tragedies are stacked one upon the other in Bill’s life, contingent on the failings of multiple people in his life to recognise the harm they are doing, that it starts to become wildly unrelatable in its maudlin execution. I’m not saying kids like Bill don’t exist, but there’s such a sledgehammer approach to establishing just how terrible his life is that any sense of nuance flies right out the windows early doors. Throw in some random stuff about loan sharks and you can be forgiven for not taking it all as seriously as the game would like.

This is one loaded image

…given all the other issues you’ll constantly run into, frustration with a janky puzzle feels amplified by a certain rage lurking very close to the surface at all times

Traipsing about the nightmare that Bill’s reality has become from a fixed isometric viewpoint, you’ll be tasked with finding keys to locked doors, solving puzzles, pushing blocks and pulling switches like it’s 1986, some light platforming, and occasionally hiding and/or running from hellish apparitions. Sometimes, all these things are done at the same time. Fun. The exploration aspects are probably the most accomplished, and poking around the various environments looking for items for progression or to provide story context are some of the better moments. One or two puzzles were also quite well done, including a Rubik’s Cube inspired section that I thought was pretty thoughtful. Other puzzles run the gamut from pointlessly simple to needlessly obtuse, and given all the other issues you’ll constantly run into, frustration with a janky puzzle feels amplified by a certain rage lurking very close to the surface at all times. I’m glad my children weren’t around after struggling with a boss fight for twenty minutes (involving the flipping of dozens of switches), only to realise that the game had glitched out, making the puzzle unsolvable. A restart and some colourful words of disapproval (read: I swore enough to  make baby Jesus cry) on my end fixed it, but it’s testament to the wonky puzzle design that I didn’t realise the game had glitched at all for so long.

By far the worst offender in the gameplay department is the all too frequent hide and seek stealth. You have a weird butterfly called Bitki that will give you the approximate location of enemies that will kill you in one hit, but if you’re relying on that you’re probably already dead. You can hide in a cupboard and let enemies pass, or just turn off the game and go for a walk and think about all the better things you could be doing with your time. In a fun twist, when enemies are near you, your view becomes obscured by jarring visual effects, making the whole situation just that little bit more painful. Sometimes, a monster doesn’t even have to catch you to kill you, just looking at you is enough to send Bill back to the start of a section. Chase sections feature these same great mechanics, with the added bonus of not knowing whether you’ll have to pull a switch, push a box or jump a gap (using a stilted leap inspired by Dark Souls I’m sure) during the relentless pursuit. I checked several dictionaries for the definition of fun, and none of them mentioned vision-blurring games of hide and seek or trial-and-error instadeath chase sequences. A general lack of enjoyment is the crux of the game’s problem, and within the first hour of the game the level of unfun you are destined to experience is laid bare for you to see; if you are planning on subjecting yourself to In Nightmare, leave all of your hope and love for life at the door, lest the game swallow it whole.

Instakill view cones not as enjoyable as you might think

General gameplay misgivings aside, from a sheer visual standpoint the game is actually quite competent. Clean textures and a nice use of lighting bring the environments of Bill’s tortured endless dream to life, and the art direction (while a little old hat) is well executed. Several biomes representing periods of Bill’s torment, such as his childhood home, a school and an amusement park feature some nice visual flair and plenty of detail to flesh them out. The music too is well paired, particularly the sombre piano that plays in certain poignant sections. There are however some serious issues with performance on the PS5, with some horrendous frame drops whenever the game is in motion, with the action lurching along awkwardly whenever Bill runs. This can be fixed by adjusting your console settings to 1080p resolution, and apparently an upcoming patch will address the issue, but it’s not a good look for a fairly simple game to run so poorly on powerful hardware.

In Nightmare should be a cautionary tale for any developer (be they indie, AA, AAA or even AAAA) to be careful in implementing core mechanics centring around disempowerment. Hiding in cupboards and avoiding instakill view cones can be great I suppose (actually instakill view cones can die in a fire), but if it doesn’t feed into a sense of enjoyment, it will very much feed into the opposite: righteous hate-filled fury. In Nightmare’s exploration and puzzling probably could have easily carried the experience without having to beat the player over the head with instafail stealth, but this is the path it chose. At the end of the day the game’s title is a description of not only Bill’s predicament, but of any player who decides to follow him on his journey. 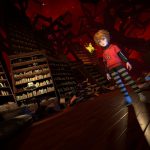 In Nightmare Review
Mind Games
A quaint art direction and an occasional well-conceived puzzle are not enough to redeem this painful slog through a child's living nightmare. Trial-and-error instakill sections and some of the worst hide and seek stealth since Sanity of Morris ensure the greatest nightmare will be your own.
The Good
The visual design is pedestrian, but well executed
Some sombre ivory tinkling pairs well with a few sequences
A couple of thoughtful puzzles
The Bad
Overwrought, garbled story riddled with spelling mistakes and grammatical errors
Hide and seek stealth some of the worst in the business, actively sucks enjoyment out of your life
Trial-and-error chase scenes and instakill view cones shouldn't exist...ever
Fundamentally unfun
3
Rubbish

In Nightmare Review
Mind Games
A quaint art direction and an occasional well-conceived puzzle are not enough to redeem this painful slog through a child's living nightmare. Trial-and-error instakill sections and some of the worst hide and seek stealth since Sanity of Morris ensure the greatest nightmare will be your own.
The Good
The visual design is pedestrian, but well executed
Some sombre ivory tinkling pairs well with a few sequences
A couple of thoughtful puzzles
The Bad
Overwrought, garbled story riddled with spelling mistakes and grammatical errors
Hide and seek stealth some of the worst in the business, actively sucks enjoyment out of your life
Trial-and-error chase scenes and instakill view cones shouldn't exist...ever
Fundamentally unfun
3
Rubbish
In this article:a kid named bill, Beijing Magic Fish Technology Co., in nightmare, Maximum Games