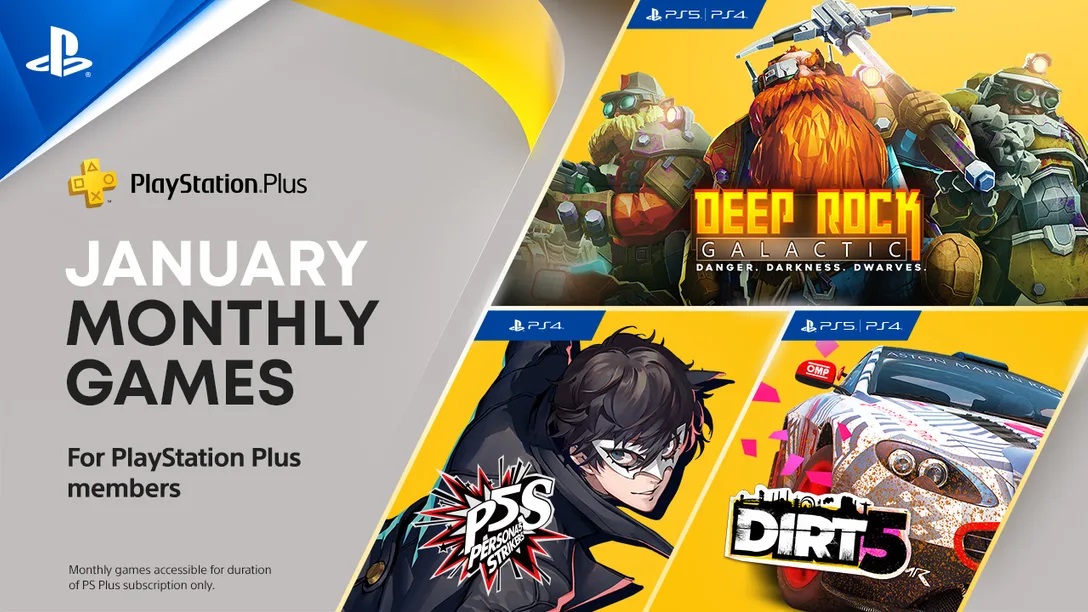 Well, I don’t know about all of you, but I feel like I’ve put on a heap of weight from eating turkey and pumpkin pie, so making the most of the nicer weather and getting some exercise would be a good idea. Fitness-based New Year’s resolutions will have to wait though because the first round of PlayStation Plus games for 2022 have been announced. December’s line-up rounded out the year with Godfall: Challenger Edition, Lego DC Super-Villains and Mortal Shell, which likely gave a lot of us something to do after all of the presents were opened.

Announced via the PlayStation Blog, we now know that January’s free PS Plus games will be Deep Rock Galactic, Persona 5 Strikers and Dirt 5. These games will be available to download from January 4, so clear some space on your console if you need to.

Set in the most dangerous cave system in the galaxy, Deep Rock Galactic is a co-op first-person shooter that sees one to four players take control of dwarven miners as they explore, dig and fight against alien creatures in a bid to survive. With a range of weapons and tools, you’ll need to rely on communication, teamwork and some good old-fashioned firepower to make your way through the nasty underground caverns.


A follow-on from the widely acclaimed JRPG Persona 5 (which we gave a 9), Strikers sees the return of Joker and the Phantom Thieves, with a twist. Featuring action combat rather than turn-based, this sequel changes up the formula while managing to maintain the look, feel and character that the series is known for. If you enjoyed Persona 5, or if you enjoy action games, this might be worth your time.


The long-running Dirt series has consistently managed to bring quality rally racing to gamers and the latest entry is no exception. Dirt 5 offers a range of vehicles and modes that will satisfy both the hardcore enthusiasts and the casual audience. With online and local multiplayer, this is a racing game that’s both rewarding to play alone and fun as hell to play with friends.


If you haven’t downloaded Godfall: Challenger Edition, Lego DC Super-Villains, Mortal Shell, The Persistence (PSVR), The Walking Dead: Saints & Sinners and Until You Fall, then be sure to add them to your library at the very least by January 3.

What do you think of this line-up? What would you like to see added in February? Let us know in the comments or on our social media.

In this article:free games, January 2022, PlayStation, PlayStation Plus, ps plus, ps4, PS5, subscription