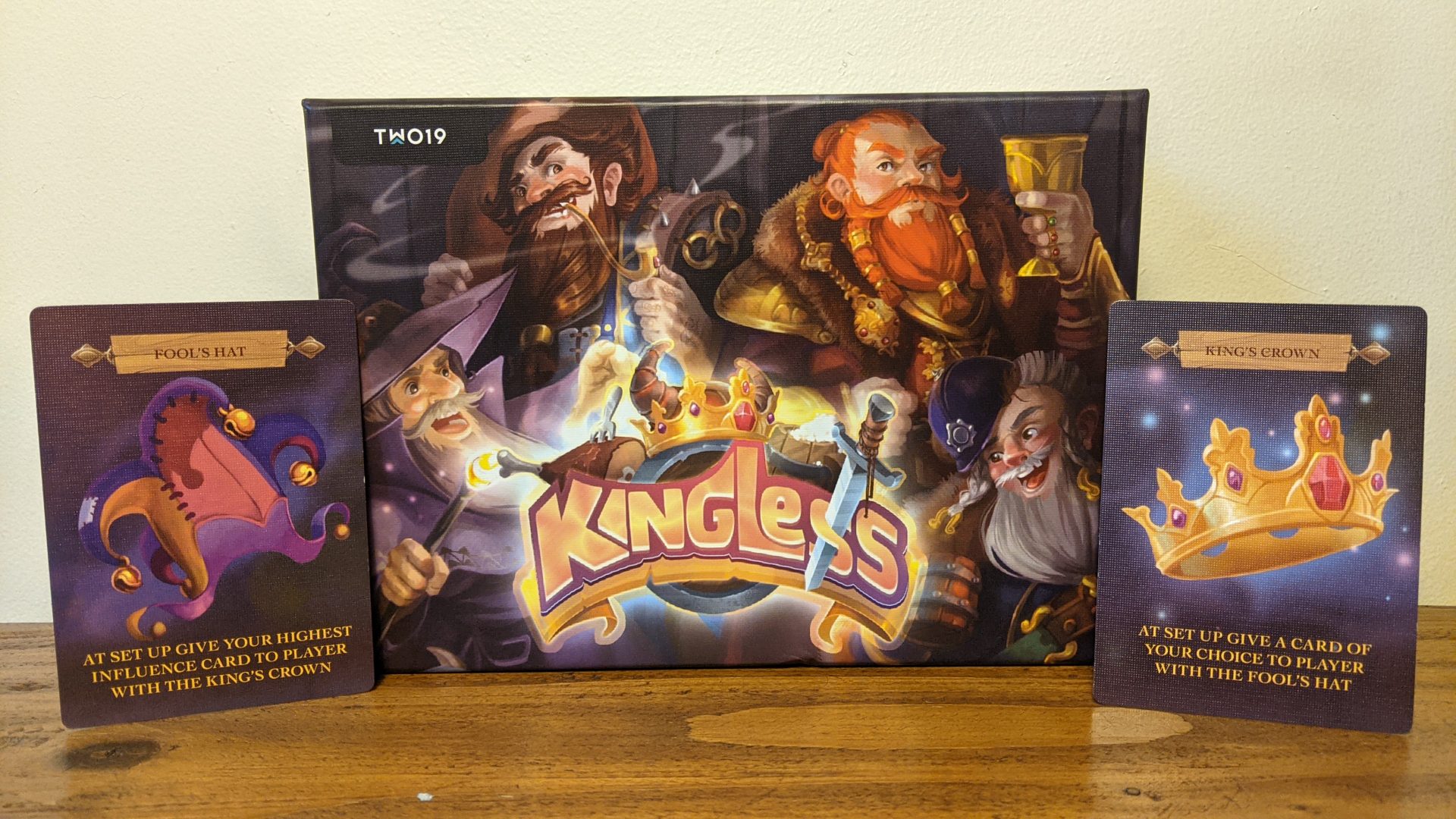 Beefier board games, like Outer Rim and Scythe, can be a huge time investment, so it’s always advisable to first warm up with something quick and easy before taking the plunge – a game that you can set up, play and move on from all within a half-hour or so to get you all limbered up for the time sink ahead. Created by Hobart-based studio Two19, Kingless is a dwarven-themed 2–6 player competitive card game that falls right into this category, touting easy-to-learn rules and rounds that can be started and finished in around 20 minutes. With some charming art and a good sense of humour, is this a home-grown game fit for a king, or is it just a foray for fools?

In Kingless, your goal is to play cards from your hand in order to finish the game with the most Influence, a point value that each card has in the top right-hand corner. Once a player has managed to play five or more cards out in front of them the end-game is triggered, everyone has one last turn and then you total up your score and the player with the highest Influence wins. Simple right? Well, the premise sure is simple, but the ‘friends’ you’ll be playing with will make it a little bit harder to achieve success.

There are three types of cards that you can play: Dwarves, Items and Events. Dwarf and Item cards will always have an Influence value, whereas Event cards just have action text that will allow you to gain an advantage or screw over your opponents. During your turn you’re free to play as many Event cards as you like, but once you play a Dwarf or Item that’s your turn over. Turns are quick and snappy so, unless you have a player that takes forever regardless of what game you’re playing (you know who you are), the game will move along at a good pace.

These cards are a varied bunch. Some will make you hungry, others will turn you off food entirely

Now the game is centered around rough and rowdy dwarves, so you know it’s not going to be all hugs and hoorays. Each card that you play will have action text that will affect the game in a number of different ways. This can be as simple as Draw, allowing you to draw a certain number of cards from the communal deck or Play, which lets you play a second card of a specific type. The real fun comes when you play cards that mess with your opponents. Pick Pocket will let you steal a card at random from a player’s hand, Discard will force a player to ditch a card from their hand and Gutter bins a card from someone’s play area. For my money, the best action is Claim, which specifies a particular card for you to steal from another player, whether it be in their play area or even in their hand. I got a real sick sense of pleasure from calling out a card name for Claim and watching one of my friend’s faces drop when they realise they have it in their hand. Evil? Yes. Gratifying? Absolutely.

Don’t get too attached to your Dwarven friends, because cards will move in and out of your play area more frequently than I vacuum my house. This adds a nice level of strategy to the game, as you’ll likely want to save your high Influence cards for late in the game, lest they be stolen or guttered by another player. This also sprinkles in a healthy dose of unpredictability to rounds as well, as the player who has been dragging their feet all game can come out of nowhere and steal the win at the very last minute. As fun as it is to be that sleeper who snags victory, it can feel like your early and even mid-game plays mean little to nothing as a result. Win or lose though, the underhanded mechanics make the game fun to play in the moment.

Once the game is finished and Influence has been totalled, there’s some appointing to be done. The player who won the game is proclaimed King and the unfortunate holder of the wooden spoon is dubbed the Fool. Aside from bragging rights and shame, these cards will carry on to the next round, with the Fool being forced to give the King their highest Influence card. It sounds rough, but as I said, cards in the early game are fairly expendable, so it’s not a huge deal in the long run, it’s just a way for the winner to laud over the other players that little bit more.

As Kingless is meant to be played and enjoyed with friends, with shouting and laughing encouraged, the dwarven theme fits like ale in a tankard. Whether depicting a burly dwarf, a comforting hearth or a whopping slab of meat, the cards all feature endearingly cartoonish illustrations that will likely crack a few smiles around the table. The artwork is colourful and playful, which, along with the tongue-in-cheek names of the cards, add a nice amount of character to the game. Accompanying this lively artwork is some unfortunately generic text that can be hard to read from across a table. The flavour text is sat at the bottom of each without a backing which, while leaving more room for the art, can make it tricky to decipher if you’re anywhere other than right next to the card’s owner. Reading the text is made even more difficult as the cards’ linen finish become incredibly reflective at most angles when under a light. Yes, these are minor inconveniences, but they’re made more noticeable as they all pertain to reading card text.

Whether you’re kicking off a board game-filled evening, in need of a palette-cleanser after playing a complicated Euro game or simply looking to have some fun with a few friends that aren’t dedicated to the hobby, it’s worth having a simple and fun card game in your collection. Kingless might be a tad unpredictable for some and the cards can be a pain in the arse to read from a distance, but it’s a solid card game that fits into this category nicely. With a charming theme and gameplay that is fun, chaotic and easy to learn, this is a card game that newcomers to the hobby and dice-rolling veterans will both find enjoyment in.

Review copy supplied by the publisher 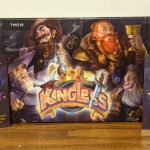 Kingless (Tabletop) Review
A Regal Ripper
With charming art featuring plenty of beer, meat and dwarves, Kingless offers up a simple and easy-to-learn card game experience that will have your table yelling and laughing for mostly the right reasons.
The Good
Simple, easy to learn rules
The mechanics encourage shenanigans
Rounds are quick and snappy
The theme and art are charming
Rounds are chaotic and unpredictable…
The Bad
…making early plays feel a bit pointless
Text font is generic and doesn’t fit the theme
Cards are very reflective

Kingless (Tabletop) Review
A Regal Ripper
With charming art featuring plenty of beer, meat and dwarves, Kingless offers up a simple and easy-to-learn card game experience that will have your table yelling and laughing for mostly the right reasons.
The Good
Simple, easy to learn rules
The mechanics encourage shenanigans
Rounds are quick and snappy
The theme and art are charming
Rounds are chaotic and unpredictable…
The Bad
…making early plays feel a bit pointless
Text font is generic and doesn’t fit the theme
Cards are very reflective
In this article:2-6 player, Australian Made, Board Game, card game, Home Grown, Kingless, Tabletop, Tassie MAde, Two19