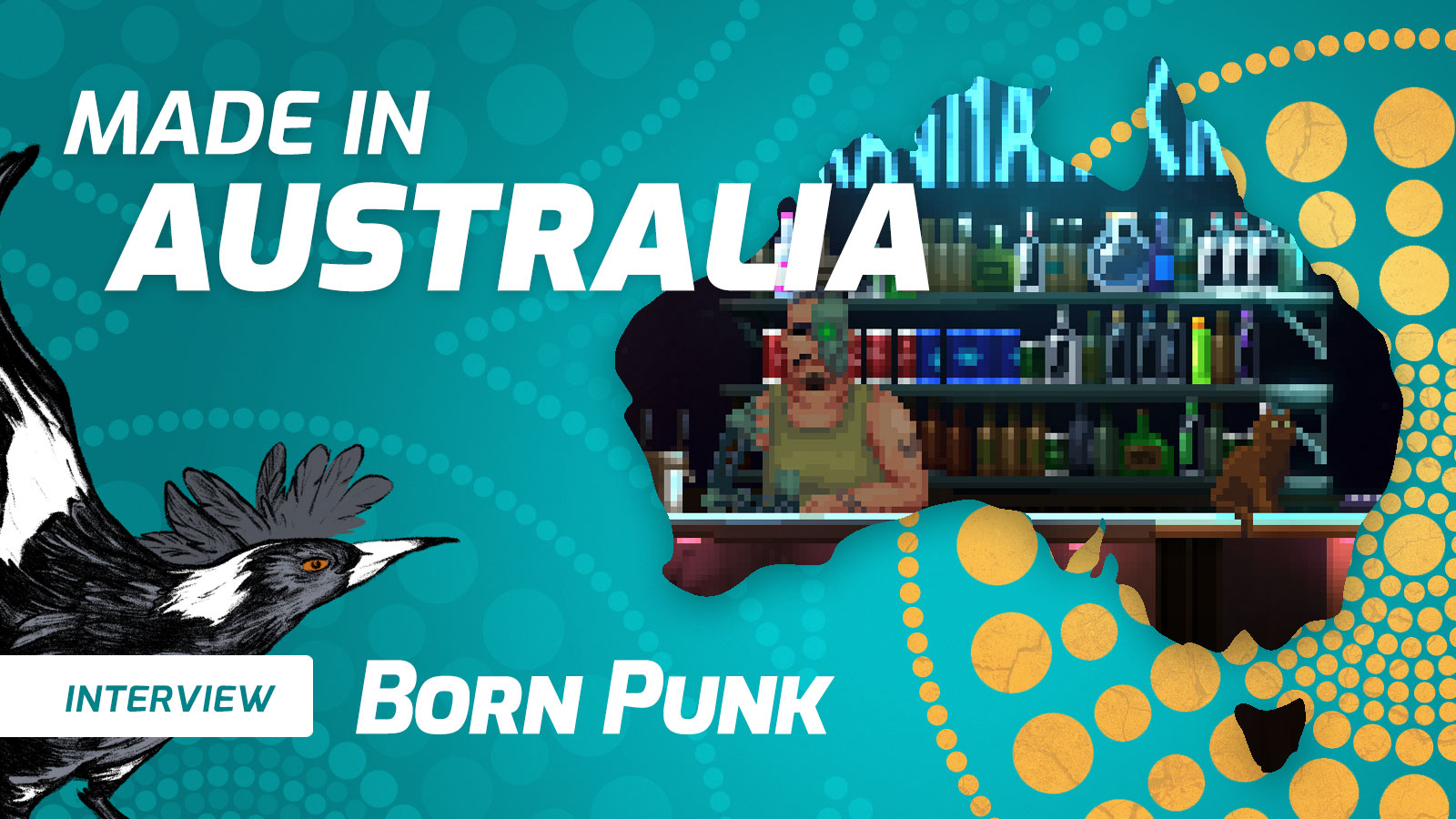 The point-and-click adventure is one of gaming’s oldest genres, and while some consider its heyday to be long gone, the genre is still thriving thanks to a myriad of indie developers. One of those developers is the Melbourne-based studio Insert Disk 22, which was founded by Falko von Falkner, a lifelong point-and-click fan, so it should come as no real surprise that the studio’s first foray into game development is in the form of a point-and-click adventure. Born Punk is that game and I had the chance to speak with von Falkner to learn all about it ahead of its launch on June 22.

Falko von Falkner: Born Punk is a sci-fi cyberpunk point-and-click adventure about a combat hacker down on her luck, an android who thinks he’s a rapper from the 20th century, and a disillusioned CEO of a global mega-corporation. The three share one tiny problem: mysterious entities have infected their brains. They have to work together to figure out what happened, and how to get rid of their ‘guests’.

WP: How long has Born Punk been in development?

FvF: BP has been in development since late 2018, but things have only really kicked off since the conclusion of our Kickstarter campaign in February 2019.

WP: Where did the inspiration for Born Punk come from?

FvF: Lots of places. The pen and paper RPG Shadowrun, for example. Old LucasArts and Sierra Online games. I’ve been a fan of the cyberpunk genre for a long time and wanted to add my own twist to it.

WP: Why three playable characters? And how did you come up with the characters in the game?

FvF: Originally, only Eevi (the combat hacker) was a playable character. Flash (the android) and Mariposa (the CEO) were supposed to be major NPCs. When I planned our Kickstarter campaign, I thought ‘hm…I think it would actually be interesting to be able to experience the game from their perspective’ and made the two characters a stretch goal on Kickstarter. Very happy that particular stretch goal was reached.

WP: What made you want to develop a point-and-click game?

FvF: Point-and-click adventures were my first gaming love, so it seemed like a logical step to make such a game. Well…do the early Sierra games with their text parsers count as point-and-click? If not, too bad! They count now! 🙂

WP: Let’s talk about Born Punk’s setting – what made you choose a futuristic Denmark?

FvF: Bornhom, the Danish island that is the background of Born Punk’s story, is a setting that has rarely been used in gaming. I knew I wanted Born Punk to be set on an island, and I wanted the island to be free from popular tropes. Bornholm was a perfect fit.

WP: Bornholm does not look like your typical cyberpunk city, why is that?

FvF: Because there can only be so many Hong Kong and Shanghai clones in gaming before we have to say, “Maybe it’s time for something different.” I found the idea of a Northern/Eastern European cyberpunk scenario quite interesting, as the cultural influences in that region naturally results in a very different look and feel than ‘traditional’ cyberpunk tends to show us.

A former combat hacker, a corporate CEO and a malfunctioning android

WP: The game uses a pixel art style. What made you choose this style?

FvF: I didn’t have a preference for how Born Punk should look. I rather decided to find a pixel artist who I vibe with, to let them create the graphical aspect of Born Punk using whatever style they prefer. Turns out, Indrek Plavutski (hey Indrek, look, I’m on TV!) was the perfect fit, as he too was a point-and-click gamer who experienced the genre from the very moment of its inception. He does pixel art, so pixel art it is.

WP: Puzzles are a staple of any point-and-click game, although sometimes they can be too obtuse. How did you approach Born Punk’s puzzle design? You’ve said that it will have “logical puzzles,” what does this mean exactly?

FvF: It means that I’m trying to evoke a feeling of  “Of course! I should’ve figured this out much earlier!” when a player finally solves a puzzle. I think Born Punk’s puzzles are on the easy side – my goal isn’t to create a hard challenge. No ‘Born Punk is not the Elden Ring of point-and-click adventures’. I just want the player to feel like they were able to take my premise and come to a conclusion dictated by logical steps, rather than random trial and error.

WP: A lot of modern adventure games include a hint system – will Born Punk have one?

FvF: Naaaah. I’m sure some altruistic soul will come up with a walkthrough – either written or in video form – in no time. This is 2022 after all; finding information was never easier. But I also don’t think Born Punk is difficult enough to give extra hints. The hints that are given by the game via dialogue and the environment should be more than enough to solve every puzzle we through at the player.

WP: You’ve mentioned that Born Punk will have choices and consequences, can you tell us how these will work. What impact will they have? Are there multiple endings?

FvF: Some consequences are very local and confined to a puzzle. Being able to use two or three different approaches to solve a certain puzzle is an example of that. Some consequences are semi-permanent; sometimes the easiest solution to a puzzle can anger a character or make later puzzles a bit harder. And then, there are permanent consequences that directly influence the ending. As for the ending itself, I’d describe it as ‘Mass Effect like’. We take various events that happened during the game and present the player with one out of three different final outcomes.

WP: The game has full voice acting and you’ve mentioned that the narrative has over 20,000 words. Voice acting is such a big part of adventure games – what was it like working with the game’s voice actors to bring the characters to life? And how did you find the writing process?

FvF: Actually, there are 120,000 words in Born Punk. Ermergerd. Regarding voice acting, it was both fun and stressful. Our actors are amazing, but from a game designer perspective, getting all those files organised, balancing the sound, and creating the right soundscape…it takes a lot of time and was probably the most challenging aspect of development. As far as writing goes, that was much easier. I had a semi-rough draft of the story from the very beginning and developed it further as I went along. Probably not the most effective approach, but one that fits my personality. Basically, the characters and scope of the story underwent their own evolution as more and more things got fleshed out.

WP: Born Punk’s main theme is composed by Jeff Kurtenacker, who worked on WoW. What was it like working with someone who has worked on one of the biggest IPs in gaming? And as it’s a cyberpunk title I assume we’ll get some synthwave bangers?

FvF: For me, Jeff Kurtenacker will always be connected to Wildstar, rather than WoW. I loved Wildstar very very much, and he played a huge part in that. I met Kurt in LA, he’s an amazingly nice bloke. We even visited a NASA lab together! Professionally, he was amazing to work with. But then, he was trained by Hans Zimmer. The music he composed is a bit different from your classic cyberpunk synthwave. There’s a bit more nordic influence in our tracks, to mirror the scenario of our game.

WP: How long will it take players approximately to finish Born Punk?

FvF: Depending on how thorough they are, how much they want to listen to the dialogue and explore the world, whether they engage with the lore or not…I’d say between 8 and 15 hours. Maybe 20, if they treat the game like a casual stroll in the park.

WP: How much did the game’s Kickstarter campaign impact Born Punk’s development?

FvF: Kickstarter was one of the three main income sources for us. The support of our Kickstarter backers was especially important during the height of the COVID pandemic, as many personal setbacks and tragedies prolonged development time far beyond what we originally anticipated. Thank you, backers.

The stakes can be high

WP: Tell me, what’s the story with the game’s pirate cats?

WP: Thanks so much for your time. We can’t wait to play the full game on June 22.

FvF: Thank you for your consideration, Zach. It was an honour.

If you like the sound of Born Punk you can wishlist the game on Steam or check out Born Punk’s official website for more information.

In this article:born punk, falko von falkner, insert disk 22, made in australia, made in melbourne, point and click