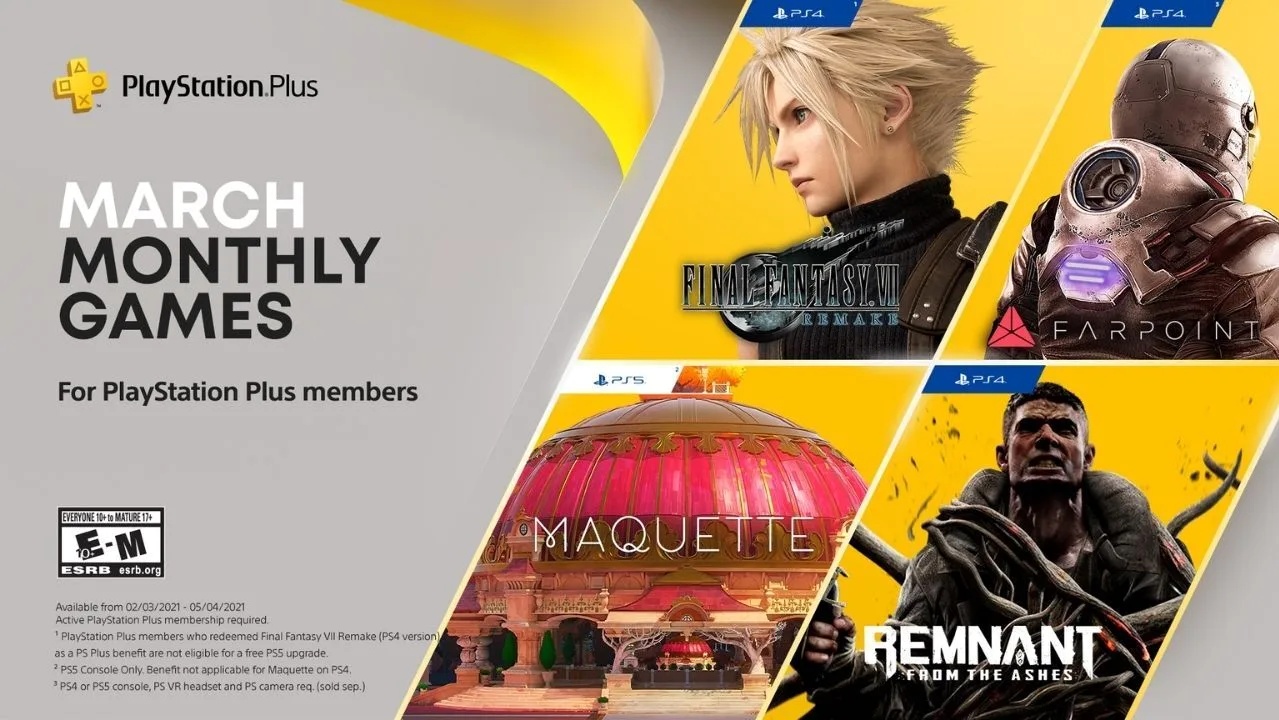 The variety on offer in February was something to behold for PlayStation Plus members. Control gave players a mind-ending singleplayer shooter experience, Concrete Genie scratched the indie platformer itch and Destruction AllStars rounded things out with a party car combat game that has a slick presentation and limitless potential. I’m running out of ways to say that the next PS Plus line-up is giving the former a run for its money, so let’s just say that it’s pretty damn good and get into it. As per usual, the PlayStation Blog gave us the announcement, confirming that Final Fantasy VII Remake (PS4), Maquette (PS5), Remnant: From the Ashes (PS4) and Farpoint (PSVR) will be available for free for Plus members starting March 2.

Easily the biggest get this month, Final Fantasy VII Remake was a long-awaited return to Midgar that managed to make many fans of the series very happy (we gave it 7.5). Mixing together real-time combat with the trademark turn-based the series is known for, the remake retold the beloved story of Cloud, Barrett, Tifa and company all while mixing up the formula and introducing a number of new story beats. After the announcement of FFVII Remake Intergrade at the most recent State of Play, it’s important to clear up exactly what is on offer this month. The FFVII Remake available through PS Plus is the PS4 version and it will not be eligible for the free upgrade to the PS5 digital deluxe version. Regardless, this is a pretty massive inclusion that will no doubt made a lot of folks very happy.

The trend of a new release game being a part of the PS Plus line-up continues this month with Maquette, a perspective-bending indie puzzler with an interesting hook. A diorama of your surroundings sits in the centre of a huge structure that, when interacted with, mimics said interaction on a larger scale. Move a bridge in the diorama and its movement will be mirrored in the real world. Akin to puzzlers like Superliminal, Maquette is releasing alongside the PS Plus start date, meaning you’ll have access to it from day dot.

Need a third-person co-op shooter to tide you over between now and the release of Outriders? PS Plus has your back in March. With a touch of roguelike influence, Remnant: From the Ashes is a survival action shooter that sees you and up to two friends battling it out against hordes of interdimensional monsters while scavenging for supplies to strengthen your loadout and, in turn, strengthen your chances of staying alive.

PS Plus doesn’t give enough love to the VR players, so this is a welcome addition. Farpoint is one of, if not the best shooters available for the PSVR platform. Set on an alien planet, you will be immersed in the lonesome tension as you check over your shoulder for spindly alien creatures that want you dead. Luckily, you have a trust assault rifle with you to keep yourself in the land of the living. Better yet, if you have a friend with VR you can play through the whole game in two-player co-op. Compatible with the AIM controller (though playable with a DualShock), this first-person shooter is a must for PSVR owners.

If you haven’t downloaded Control of Concrete Genie, or at least added them to your library, make sure you do before they leave PS Plus on March 1. Destruction AllStars will continue to be on the service throughout March, so you’ve got plenty of time to get around it.

What do you think about this month’s free games? Which are you most excited to download? Let us know.