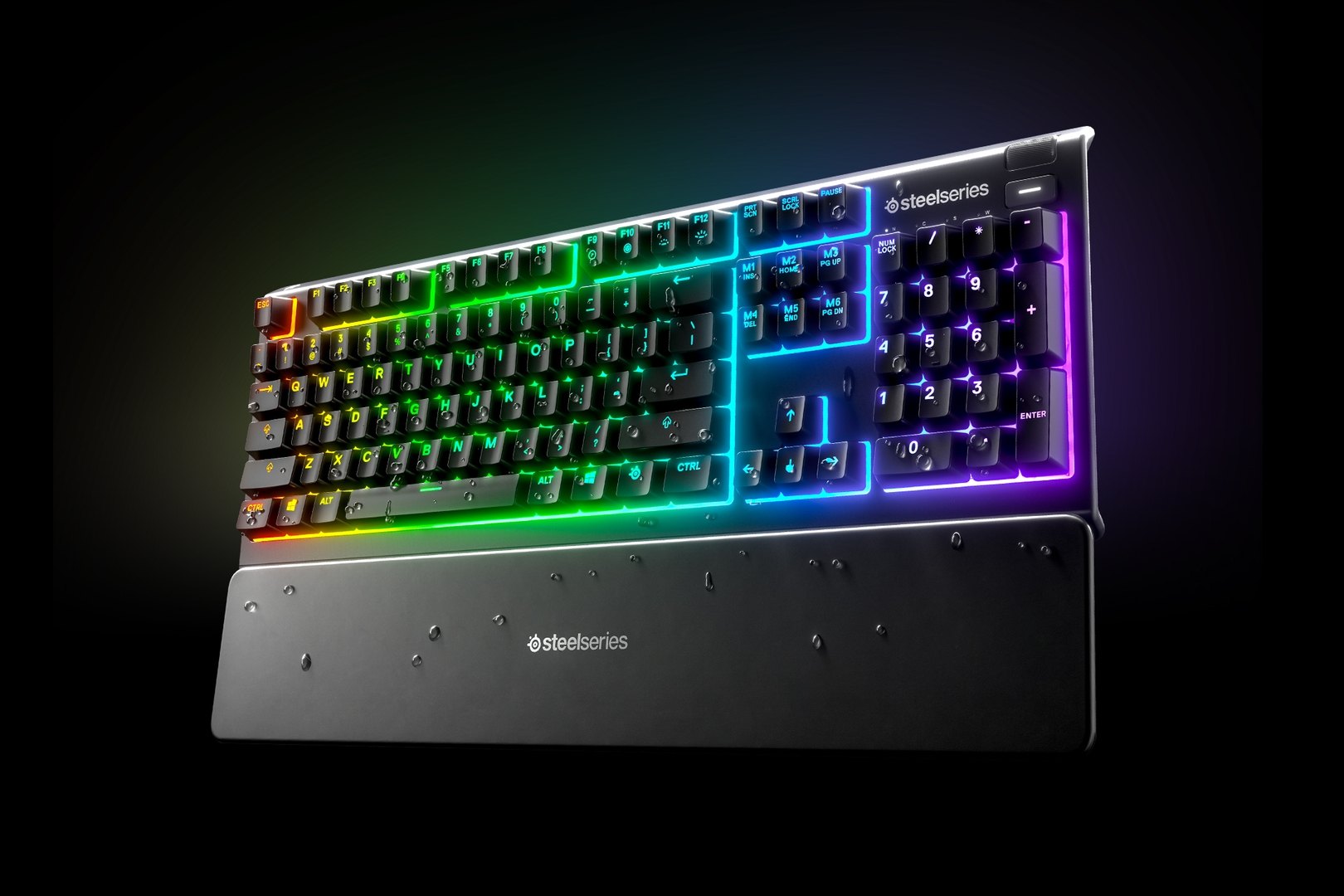 I’ve used quite a few keyboards in my time as a PC gamer. I initially used an Apple Wireless keyboard from ages ago, but that was quickly swapped out for a Razer BlackWidow (which was loaned to me due purely to how crappy my Apple Wireless keyboard was) and that keyboard served me well for quite a while. Eventually I ended up buying the Logitech G910 Orion for the quiet Romer-G mechanical switches that it uses, as well as the built-in mobile phone stand that would also allow me to more easily monitor my computer’s thermal behaviour (something which has become increasingly redundant ever since I got a second monitor). As it stands, my current keyboard is an overly large, cheap-feeling beast. Thanks to our friends over at SteelSeries, however, I’ve been able to make use of the Apex 3 keyboard more recently, which boasts similarly ‘whisper quiet’ keys as well as high-quality and surprisingly neat backlighting.

Let’s jump straight into what this keyboard is all about, starting with the features. The Apex 3 is a full-size mechanical keyboard. It comes with a magnetic wrist rest, custom key switches and ten-zone RGB illumination. The build quality is rather solid overall, including the top plate. On the top right you have a single media key which behaves similar to the media keys on earphones, where click gestures are used to pause, go back and go forward. Above the lone media key is a volume-adjusting scroll wheel which features a tactile click, something which wound up making my regular PC use a tad more audible as it’s an oddly satisfying feeling and I am a notorious fidgeter (take that as you will). Moving along, there are six macro keys on the control pad (Insert to Page Down) whose functionality can be customised within the SteelSeries Engine software. Additionally, the keyboard is water-resistant, a claim which is further backed by the recessed keys that are completely covered, protecting the key switches and the RGB illumination.

With those features aside, I’m sure you’re dying to know how the keyboard went in my time using it. If you’ve been listening to the WellPlayed DLC Podcast, you’d be well aware that I’ve been playing a significant amount of Final Fantasy XIV of late (I was an idiot and pledged to complete every raid in the game). If you haven’t been listening, you definitely should because Zach beats me if our listen count isn’t high enough each week it’s a podcast filled with the WellPlayed jank that we all know and love. Being an MMO, there are quite a few key bindings/commands to memorise. It’s a problem that is definitely exacerbated by switching keyboards, as different keyboards can have very different feels, especially across different manufacturers. This was a challenge I decided to face while playing and learning FFXIV as it existed almost as a worst-case scenario. I worked through the pain of fumbling on a new keyboard and, after the learning period, I found the Apex 3 to be one of the most comfortable keyboards that I have ever had the pleasure of using. Part of why I enjoyed the Apex 3 so much is because of the custom, quiet mechanical switches that it features. While they definitely don’t have the same tactile feel that your more standard switches do, like with CherryMX Reds, the Apex 3’s custom switches have a very smooth feel. Not in a way that feels like mush, like the older Apple Membrane keyboards, but in a way that still retains some of the tactile feel that mechanical switches are known for.

I’ve spent quite a while using the keyboard for typing as well, with my recent Minecraft Dungeons review (and this review, of course). Typing was incredibly comfortable and I didn’t have to hear incessant key clicking through my headphones *stares menacingly at the Razer BlackWidow*, which also meant that gaming late at night was easier due to me not keeping my entire neighbourhood awake with an absurdly loud keyboard.

Now let’s move to the most important thing to do with any keyboard: the lighting. Like any keyboard that is aimed towards gamers, the Apex 3 features RGB illumination. Not on a per-key basis like some other keyboards, but in zone-based illumination instead. For the most part this works really nicely. I’m someone who prefers to just allow their RGB to flow through the spectrum of colours, mainly because I really can’t be bothered setting up proper lighting profiles. Like the G910 Orion, the keys sit within a recessed illumination plate and this creates an incredibly neat and tidy lighting effect, and you don’t have that light spill that some of the more popular keyboards have. The only real downside is that the illumination methods for this keyboard mean that if any of the lights are problematic then an entire lighting zone will be affected.  The keyboard can also look slightly cheap while the lighting is turned off as you have a white plastic surface underneath the keys and, due to it being recessed, it can be a pain to clean (a problem which I have come to terms with after extended use of the G910 Orion and the Apex 3).

In terms of general build quality, the Apex 3 was surprisingly good. While $149 isn’t exactly a pittance, it is among the cheaper gaming keyboards and so I was not quite expecting the build quality to be as good as it is. The wrist rest is surprisingly comfortable for a hard surface, the entire keyboard feels like a proper, robust unit and the cable can be routed to the left, middle or right which is a nice touch. The only problem I found with the build quality is that the keyboard has quite a lot of flex. In all fairness though, most of the flex was around the top centre point of the keyboard, which was the area that had the least support while the feet were out.

The biggest issue I had with the Apex 3 however, had to do with the indicator lights. Through normal use, the only indicator light you can easily see is the Num Lock light. This is because of how close the lights are to the top of the number pad. At its best, I can see when caps lock is on because I can see the white light reflecting off of the side of the forward-slash (/) key. The only way that I could reliably see all the indicator lights was to basically lean forward and hover over the keyboard, which got uncomfortable quite quickly.

Overall, the Apex 3 offers quite a robust, solid keyboard for a relatively affordable price in the grand scheme of things. It’s definitely far from perfect, with the main issues stemming from the recessed keys, lighting method and bad placement of indicator lights, but when you factor in the general comfortability of typing and the simple nature of the keyboard it’s still a fairly solid purchase. If you’re someone that doesn’t use caps lock, num lock or scroll lock a lot, I can quite happily recommend this keyboard.

In this article:Apex 3, Hardware Review, SteelSeries