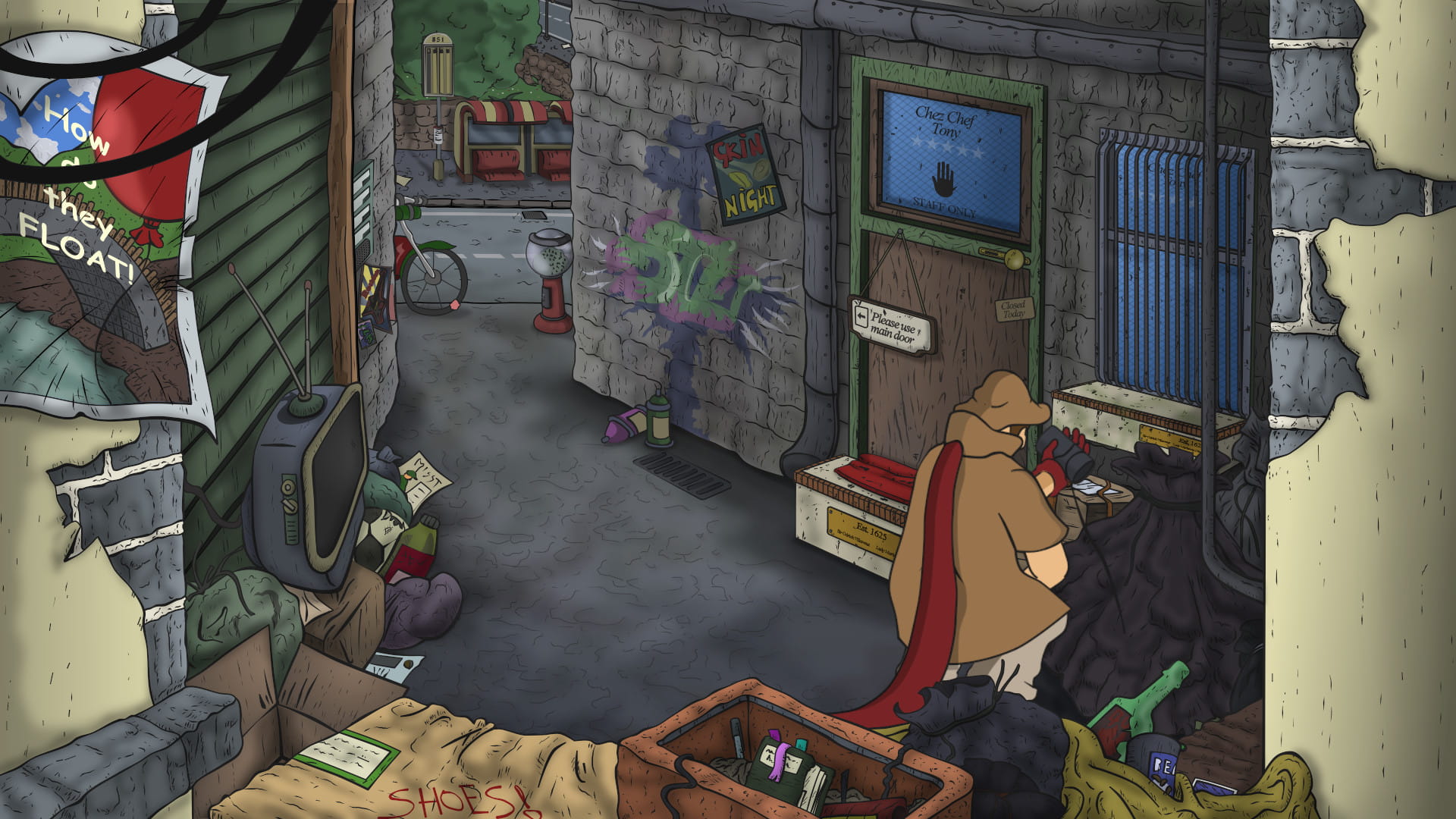 I still remember playing Broken Sword: Shadow of the Templars on the original PlayStation as a kid, and it would go on to open my mind to a whole genre of games that would become one of my favourites. Titles such as Myst, Riven, Grim Fandango and Syberia would all feature, but no series would have such a profound impact as Broken Sword did. The style in which it mixed a narrative adventure with challenging puzzles was like no other, and to this day any game that lists Charles Cecil’s adventure series as inspiration automatically gets my attention, which is how point-and-click game The Hand of Glory caught my eye on Kickstarter. One swift download and playthrough of the game’s demo was enough to convince me to pledge to the project, which was successfully funded in 2019. With the full release (of Part One) releasing in early June, does it set itself up for glory or does it go down in a blaze of…glory?

Set in the Florida tropics of Miami (the American Gold Coast), THOG follows the story of slumping detective Lazarus Bundy, who has been hot on the heels of a serial killer known as Blowtorch for some time – being teasingly at arm’s lengths thanks to the breadcrumbs left by Blowtorch. Despite eventually tracking down the killer, Bundy fails to close the case once again, resulting in suspension. Looking for a chance at redemption, Bundy decides to investigate the recent disappearance of Kathrin Mulzberg – the young scion of the influential Mulzberg family.

Bundy isn’t alone in his escapade, befriending young police intern Alice Sharp who agrees to assist on the assumption that it will help benefit her career. In true George Stobbart-Nicole Collard style, the pair play off one another’s strengths to uncover the truth, forming a bond in the process.

The developers certainly weren’t lying when they said the game was inspired by Broken Sword. Everything from the writing (Bundy is full of wisecracks), to the characters, to the soundtrack, all feels ripped from the Charles Cecil playbook (in a good way). Good point-and-click games are built on having a strong story and challenging puzzle design and THOG’s narrative is enjoyable thanks to an entertaining cast of characters, some solid writing, and excellent voice acting. From start to finish I was intrigued as to how the Mulzberg disappearance would unfold, and having finished Part One I am excited to see where the story goes in Part Two.

Late in development the decision was made to split the game into two parts. The reasoning was that the twist in the middle of the game was too intense to be a mid-game cutscene, and by splitting the game players would have ample time to assimilate it. However, the game’s twist – which is designed to have an emotional effect – feels largely out of place considering the gravitas of the twist clashes with the frequent comic tone of the game. It’s not that the twist is bad, but it feels like an unnecessary addition as it doesn’t enhance the connection or experience, at least for me personally. Hopefully it’s something that is fleshed out in Part Two and can add to the overall narrative.

Miami is full of all sorts of characters

While the game’s strong writing helps keep the story entertaining, there is the occasional tonal inconsistency that makes you wonder why the developers decided to include them. Things like using the word slut with no real context or need to and writing Bundy to come across as a perverted creep on occasions spoils what is otherwise a well-written adventure.

When it comes to the puzzles, THOG is a buffet of challenging logic. There are roughly three types of puzzles that make up THOG’s gameplay. Firstly, you have basic puzzles, which will require Bundy to combine items together to obtain another item. Secondly, you have minor puzzles, which are solutions to progressing forward, such as using the combined items with something else (such as opening a manhole). These will often involve going between multiple locations or conversing with characters to solve. Making things easier is the ability to see what items can be interacted with, which can be done with the click of a button. From this it’s easier to gauge what items you’ll need to use.

Then you have your major puzzles, which are the ones that really test your logic. There are maybe three or four major puzzles in Part One, and they all offer a substantial challenge. Usually dealing in hidden codes, the puzzles will require some serious attention to detail and lateral thinking to solve. On a number of occasions I had to whip out the old pen and paper to test some theories. Pro tip: the solution is often simpler than you think.

Overall the puzzle design in THOG is excellent. There’s enough of a challenge here without making the solutions obscure to make you feel like a Brainiac, and the variety on offer, such as obtaining ingredients for a questionable meatball recipe or escaping from capture, helps keep the challenge fresh. All in all it took me around 10 hours to complete Part One with a couple of puzzles keeping me at bay for longer than I would care to admit. However I can see more switched on people taking between 6–7 hours to finish Part One.

The humour is mostly well written

Bundy’s puzzle-solving nous isn’t the only mechanic you’ll rely on, with Alice also playable in a couple of sequences. In these moments you’ll need to use Alice’s skills in kinesics, where she’ll observe a character’s behaviour to understand their motives. It’s a neat addition that breaks the gameplay up, but it feels a touch underused in Part One.

Visually the game is backed by simple hand-drawn visuals that are full of bold colours, and while the art style isn’t jam-packed with detail, it does help you notice the details that do matter, such as an engraving or crack in the wall.

With the amount of dialogue often found in a point-and-click game it can be hard to catch every word. Making the game more accessible is a Relaxed Reading Mode that requires players to click on the screen to continue the dialogue. It’s only a small addition but it’s one that I’m sure people will appreciate. I know point-and-click enthusiasts will disagree, but one feature that the game would benefit from is the inclusion of a hint system. Getting stuck on a puzzle is a surefire way to sour a game’s enjoyment and sometimes all it takes is a slight nudge in the right direction to get things back on track. Of all the puzzles in THOG, there was only one instance where I would have turned to such a system, but with no such system available I turned to WellPlayed’s Kieron Verbrugge who managed to solve the puzzle in a matter of minutes using a simple solution I hadn’t even considered. As I said, the solution is always simpler than you think.

Alice, sharp as a tack

Over the years developers have shifted away from point-and-click games, but thanks to games like The Hand of Glory, which harkens back to a time when game design was simple yet full of charm and challenge, the genre has a strong future. But how well does it stack up against its peers? The answer is surprisingly well, with developers Madit Entertainment and Daring Touch crafting a point-and-click adventure that is full of style and character despite some minor flaws. Bring on Part Two. 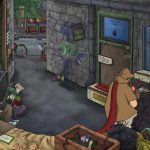 The Hand of Glory Part One Review
The Makings Of A Classic
Featuring impressive writing and cracking puzzle design, The Hand of Glory Part One kickstarts what could be an incredible point-and-click adventure
The Good
Solid writing
Great puzzle design and variety
Good cast of characters
Excellent voice acting
Relaxed Reading Mode
The Bad
Some odd dialogue decisions
No hint system
Twist feels unnecessary
8.5
Get Around It

The Hand of Glory Part One Review
The Makings Of A Classic
Featuring impressive writing and cracking puzzle design, The Hand of Glory Part One kickstarts what could be an incredible point-and-click adventure
The Good
Solid writing
Great puzzle design and variety
Good cast of characters
Excellent voice acting
Relaxed Reading Mode
The Bad
Some odd dialogue decisions
No hint system
Twist feels unnecessary
8.5
Get Around It
In this article:Broken Sword, daring touch, Kickstarter, lazarus bundy, madit Entertainment, point and click, the hand of glory