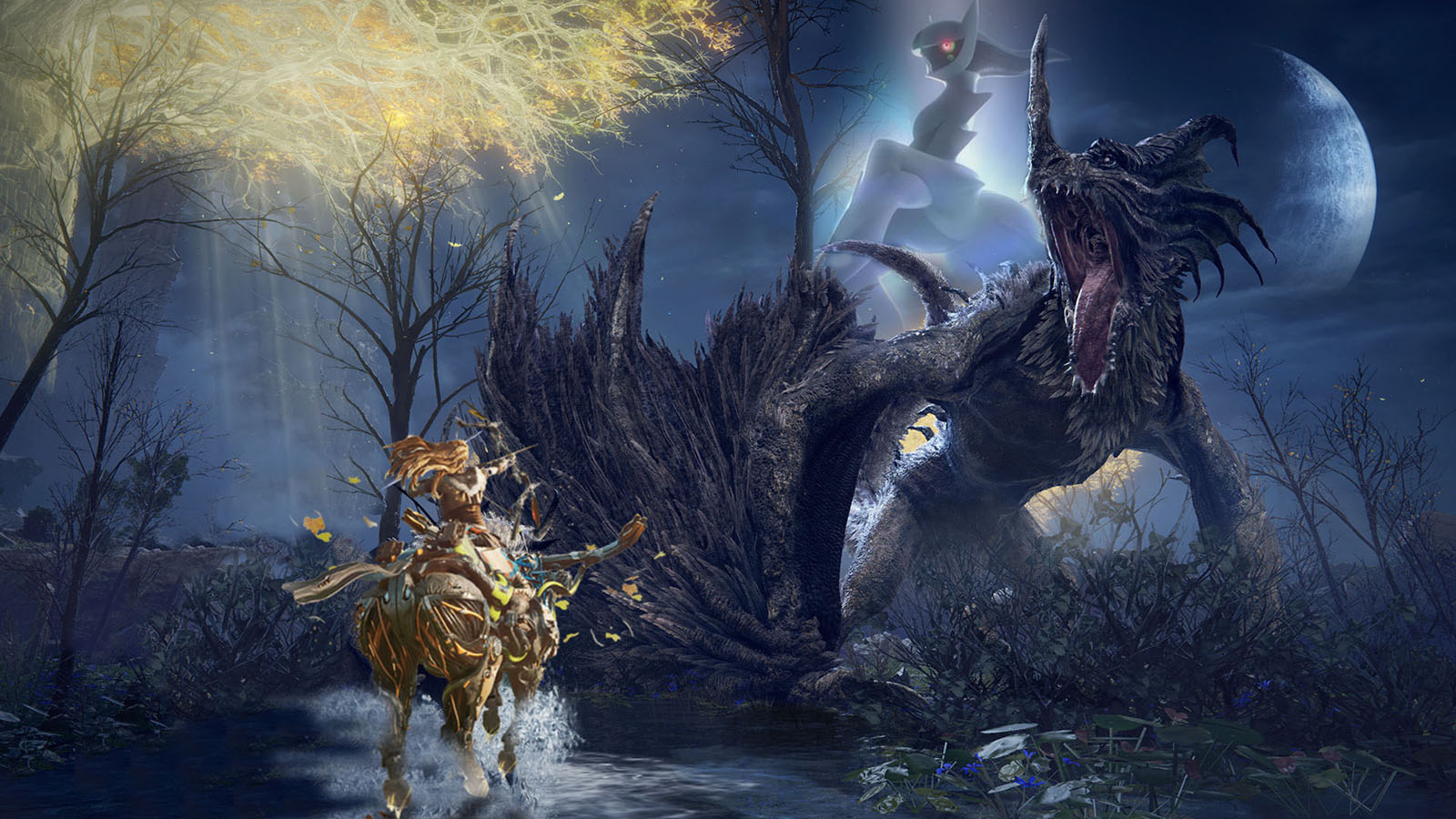 We’re barely two months into the year of our digital king 2022 and we’ve already seen three compelling open world experiences dominate the sales charts. With more and more franchises spreading their wings and allowing players a broader level of freedom, the term ‘open world’ has found itself in a position within this new generation where its definition could be forever changed, brought on by a building interest in accessibility and a need to feel different.

When open worlds first became a mainstay of the video game landscape, the likes of Grand Theft Auto and the Assassin’s Creed franchise essentially built the blueprint. Large maps, non-linear progression, plenty of extra-curricular activities, all those elements have been iterated and expanded over the years that so, so many titles have copied and pasted into their design documents. There have always been trends, from the humble platformer to the first-person shooter, with studios jumping on the bandwagon as soon as it becomes a money spinner, and giving freedom to players to determine their own way to play has become one said trend that numerous big (and small) games have taken on board

But with a year in the books, the next generation is a chance to take a closer look at those already established rules and regulations of the open world genre and consider, perhaps, that it’s time to make some much needed changes. Despite consistently high sales numbers across the industry, fatigue is never too far behind, leading to a constant back and forth as to how to keep things fresh and exciting to maintain said sales targets. We still have some way to go this year to discover how, exactly, some of the big names have considered those thoughts, but the first three big releases of the year certainly tell a story as to how those conversations are going.

It’s the most intriguing Pokémon adventure so far

The Pokémon Company and Game Freak have been playing with ideas about the mainline Pokémon franchise for some time, a series that in many ways has always allowed an element of freedom to its players as to how their journey to become a Pokémon Master can go. We’ve seen open world areas in Pokémon Sword and Shield, small pockets of space with free roaming monsters living the dream, but with Pokémon Legends: Arceus the rulebook was completely thrown out in favour of something that feels more modern in its adventure.

Where once you went from one gym to another, claiming badges and building up your Pokédex as you biked your way from one town to the next, Pokémon Legends: Arceus put the experience firmly in the players hands to establish their own path, building out the first ever Pokédex or simply running around causing a fuss as Pokémon roamed freely in far bigger areas than the franchise has ever committed to digital media. Of course, we know now that Game Freak were using the lessons learnt during Legends: Arceus’ development to establish the next mainline Pokémon games, Scarlet and Violet, the biggest lesson of which was ‘be prettier’, but the steps taken were a positive sign for fans who had found the series to have lost some of its magic.

It says a lot that a franchise that has been entertaining players since 1996 can still find ways to sell in big numbers and bring in new fans, and Legends: Arceus has definitely found a fanbase thanks to its brave changes to the established formula. Whether that can be repeated in less than a year with Scarlet and Violet remains to be seen, but in re-imagining itself as a bigger, bolder open world experience, some of that fatigue may have finally been shrugged off.

Aloy’s latest adventure is a sight to behold

Pokémon isn’t the only franchise to have redefined itself of late, given the success of Halo Infinite for Xbox at the tail end of 2021, but Sony continues to find success with that very same formula over and over again. Having already book-ended the console generations with Ghost of Tsushima and Marvel’s Spider-Man: Miles Morales, 2022 promises to be another year of successful releases led by Horizon Forbidden West. Well reviewed and looking absolutely gorgeous, Aloy’s sophomore outing doesn’t as much change the established rules set by Horizon Zero Dawn as it polishes them to a level of shine very few other titles can compete with, save for any other Sony release of the last few years. Such is that level of consistency the PlayStation Studio’s core developers have found themselves in that, even when a title like Days Gone struggles, there’s still a level of quality that’s unmatched.

So Horizon Forbidden West toes the existing line, a large open map that gradually opens itself up to you the more you journey out west, plenty of icons tempting you with side quests and collectibles to keep you occupied as the story plays itself out. It’s the open world experience at its best, even if there’s nothing that challenges the perception of what an open world should be. There’s certainly nothing wrong with that, especially when the chaos of fighting giant robot dinosaurs hits its stride. It’s entertaining, with slick controls and plenty of traversal options meaning very few (if any) players will find themselves bored with Aloy’s quest to save the world.

Quality defines the modern Sony experience, high budgets and excellent teams behind the reins. Plenty of other studios have tried to follow that same path, most notable Ubisoft where the past five years have seen almost every major release from the French publisher has been an open world. However, it’s been a mix of hits and misses, Assassin’s Creed going up and down whilst Ghost Recon lost its way. Where as Pokémon thoughtfully reconsidered its existing rules to fit within the concept, Ghost Recon felt forced into the wrong shoes, shuffling along with a limp to the finish line. Similarly, the time taken to find Horizon Forbidden West near the top of the review scores charts was a sense of faith in its opportunities, unlike Ubisoft that tried to rush things out the door to meet deadlines.

A captivating beauty, despite the many deaths that lay ahead

Which leads us to arguably the biggest release of 2022 so far, a title that has been the talk of the town for some time since the announcement that the man behind Game of Thrones was working with the team that redefined what it meant to die, then die, then die again. Elden Ring promised to be FromSoftware Inc.’s most immersive, open experience to date, having already broken some of their own rules with Sekiro: Shadows Die Twice a few years prior. By all accounts, they’ve achieved just that.

But unlike its competition, Elden Ring doesn’t rest on its laurels. Players have to seek out answers, their chosen created character doesn’t constantly talk to themselves to lead the player down the right corridor or use the right item, the NPCs are not at all helpful and though the rules of exploration are up to the person behind the controller, there’s a greater sense of control to the world as giant bosses patrol the land to punish those who push a little too far in the wrong direction. Elden Ring, like the Dark Souls series, isn’t for everyone and wears that on its tarnished sleeve, as opposed to your Pokédex journey or Aloy’s quest that on many occasions goes out of its way to make the travel between destinations as engaging and enjoyable as possible.

Despite the darker, more difficult world FromSoftware has defined its success upon, more and more players have become willing to take on the challenge of the ‘Soulsborne’ games, the reward of simply surviving for more than an hour or beating the first boss far greater than finding every collectible or catching every critter. Within an open world setting, those rules suddenly adjust to exploration out of fear of dying, being more at ease with finding every hidden tunnel or underground structure, building up a little confidence and experience before taking on the greater threat. Very few other open world games can say they reward you for hiding.

Time will tell if Starfield can deliver on its promises

Yet the experience will be lost on many who prefer their world building to be vibrant and less stressful, and those who appreciate accessibility over creative visions. We’ve seen that conversation build over the past few years, more players wanting the freedom to play their way or to simply access the game at all, constricted by awkward controls or difficulty levels that are set in stone. It’s all about broadening the player base to allow everyone a place to play, something that Guerrilla Games firmly established in the world of Horizon.

There’s plenty more open world games yet to reach our homes this year, some more highly anticipated than others. Many see Nintendo’s Legend of Zelda: Breath of the Wild sequel as the biggest of all, but there’s also the likes of God of War Ragnarök, the newly confirmed Pokémon sequels, Square Enix’s Forspoken and the long-awaited new IP from Bethesda Game Studios, Starfield.

What’s most interesting about the three that have lit up social media and store shelves so far is how different and engaging they all are in their own way. They’ve reconsidered what the open world game can be, avoiding the pitfalls and problems that can bring on the dreaded genre fatigue whilst feeling wholly unique when compared to one another. That’s increasingly hard to do in the modern world of video games, whether any of the upcoming slate of titles can hit those same high marks of achievement remains to be seen, but it just goes to prove that there are plenty of ideas and concepts still out there that can keep these open worlds fresh and worthy of exploring.