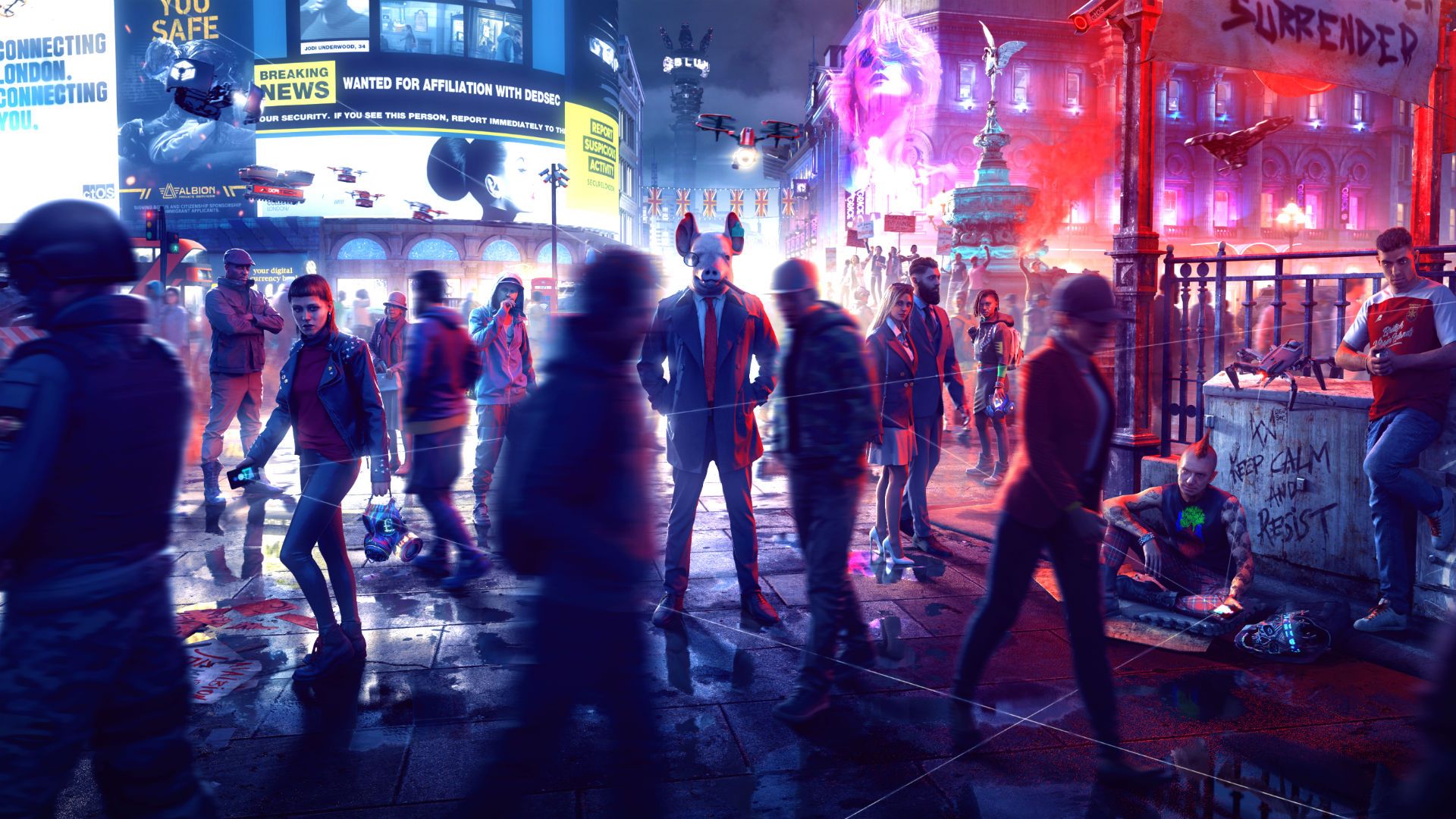 Open-world games have never really been my jam for a number of reasons. The biggest reason is time; I simply don’t have enough disposable free time to dedicate to one gigantic game with everything else going on. Every now and again there is an exception to this, where a game world, premise or gameplay hook will lure me in and make me find time. For me, Watch Dogs is one of those series, with Watch Dogs 2 being one of my favourite games this generation. The series’ newest entry Watch Dogs: Legion aims to change the game somewhat with the ability to play as anyone, and after playing a preview build a few weeks ago I did wonder if this would work to the detriment of the narrative, but after playing the full thing I can tell you that I was wrong…sort of.

Watch Dogs: Legion sees the series jet across the Atlantic from America to the mean streets of near-future London, where a private military company known as Albion has been given free reign to restore order after a terrorist attack on the city – an attack that the hacker group DedSec was framed for by an unknown group known as Zero-Day. As a result, DedSec is practically wiped out, leaving both the city and group to rebuild and revolt, with DedSec ultimately looking to take back the city and to get to the bottom of who Zero-Day is.

The world of Watch Dogs: Legion is not a pleasant one and Ubisoft has done a great job crafting an oppressive authoritarian vibe, with drones patrolling the air while power-hungry Albion soldiers rule the streets with excessive force, arresting citizens for petty indiscretions both real and imagined. Groups of citizens will protest against Albion’s reign of tyranny and graffiti is scrawled across the buildings, painting a picture of a society unravelling.

While it’s not an exact replica, London has been recreated with impressive detail. The icons of the city such as the Tower of London, Buckingham Palace and the Thames are all here in their glory, and the citizens all talk proper British, both in terms of accents and slang. My girlfriend, who loves London and spent some time living there a couple years back, had a blast driving around the streets and taking me to the apartment building she lived in and other places she visited. Much like the city itself, it’s full of one way and narrow streets that set it apart from previous Watch Dogs locations.

Time to take back the city

The city is divided up into boroughs, with each area having a handful of challenges to complete such as spray painting a building or executing a dangerous threat, which upon completion will turn that borough from oppressed to defiant. Making a borough defiant will also grant you access to skilled recruits with skills unique to that character, such as a beekeeper.

If you’re worried about London being another sprawling Ubisoft open-world then it should ease you to hear that while it’s jam-packed full of stuff to do, it’s not overwhelming in any way. Each person in the world is essentially their own side mission, so you’ll only have to worry about those when you need to recruit someone. However, if you’re strapped for cryptocurrency (London’s currency), then you can deliver packages for a delivery company or find hackable crypto caches to boost your coffers.

Most of Legion’s gameplay follows the same blueprint as its predecessors, so if you’ve played either previous Watch Dogs titles before you’ll know what to expect. There’s hacking aplenty, with most electronics in the world hackable, whether it is a drone or a camera, and hacking into areas will generally require you to complete puzzles.

However there is one big change that Legion introduces, and that is the aforementioned ability to play as anyone. What’s incredible about this mechanic is that it’s not a certain group of people, it is quite literally anyone; any Tom, Dick, Jane or Harry you see walking down the street can be recruited to the DedSec cause. Usually you’ll need to complete a favour, such as rescuing a friend or acquiring some data to convince them to join the fight, while others who aren’t fans of DedSec will need a little more work to win over. The downside here is that they do start to feel a little repetitive once your roster starts filling up.

Can you hack it?

Each recruit (or operative as they’re known) has their own traits and perks, and profiling the populous of London will reveal these, meaning you can decide whether someone is worth pursuing or not. For example, one potential recruit may have the ability to withstand a higher amount of damage, another may have the ability to call in a drone whenever they please, while another may come loaded with a lethal weapon, such as an AK-47. On the other hand, you could end up with a recruit who constantly spends your cryptocurrency buying clothing, like I did. If you do want to customise a character’s look you can purchase clothing and other accessories. Furthermore, you can purchase and upgrade weapons (non-lethal) and gadgets with Tech Points found in the world and acquired from completing missions.

Switching between characters is fairly simple – jump into the menu and select the character you want to play as. Although annoyingly, you’ll be subjected to a lengthy loading screen (a problem throughout the game). Unfortunately, you can’t switch a character mid-mission, so you’ll need to make sure you select the right operative before jumping in. If you really want to test your mettle you can enable permadeath mode, otherwise if your character dies they’ll simply be arrested and be unavailable for a period of time, which is where recruiting a lawyer comes in handy, given they have the ability to free you from prison.

On a surface level, the obvious downside to Legion’s play-as-anyone mechanic is that with your DedSec team is so interchangeable it’s much harder to feel an emotional connection to any of the game’s characters. I wouldn’t say I became heavily invested in any of my characters, but I did have my favourites. However, the ability to play as anyone actually works in the narrative’s favour. Recruiting a ragtag crew of hackers with varied backgrounds makes sense in the context, especially with each operative having their own skills and uses.

There are a handful of pre-set characters that you’ll encounter, such as DedSec leader Sabine, with the majority of the others being the megalomaniac villains, however the most enjoyable familiar character is your shit-stirring AI accomplice Bagley. Bagley is essentially a more useful and sophisticated version of Amazon’s Alexa or Apple’s Siri, and will point you in the right direction when it comes to missions, identifying potential recruits, as well as just providing quality banter.

The other neat addition to the gameplay is your trusty spiderbot, an arachnoid robot that can allows you to infiltrate areas that you can’t get to, as well as complete missions without even stepping foot in the restricted area. Best of all, the spiderbot is capable of taking down unsuspecting enemies, and this is where Legion’s clever level design is on display. Missions are able to be completed a number of ways all depending on your choice of operative, so whether it’s sneaking in via your spiderbot, accessing the roof via a drone, or just walking in the front door, the choice is yours.

Like its predecessors, the driving in Watch Dogs Legion is serviceable, but traversal is not limited to cars, with boats and drones all providing useful means of transport. There’s also a fairly generous fast travel system which can be used via the city’s underground train system, although it means another loading screen.

The lip-syncing can be a bit off at times, and I’m assuming that’s a result of the game’s play-as-anyone mechanic. Voices often don’t feel like they reflect their facial counterpart, which is jarring at times but not a dealbreaker. Furthermore, I did encounter a number of bugs and crashes throughout my playthrough, which were frustrating but I was lucky that they were all fairly harmless in terms of progression.

It may not work for every game, but the ability to identify, recruit and play as anyone in London is a mechanic that shines thanks to a compelling narrative and world where it all just works. Factor in some solid writing and great level design, and Watch Dogs: Legion is one of the most enjoyable games of the year, only sullied by some lengthy loading times and some poor lip-syncing. 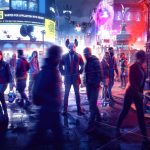 Watch Dogs: Legion Review
The Power of London
With a surprisingly good narrative that excels thanks to the unique ability to turn anyone into a DedSec hacker, Watch Dogs: Legion is a damn good time
The Good
Play as anyone is a neat mechanic
Compelling narrative and setting
Love the British slang and accents
Good level design
Spiderbot rules
The Bad
Loading screens
Lip-syncing is well off
Some performance issues
8
Get Around It

Watch Dogs: Legion Review
The Power of London
With a surprisingly good narrative that excels thanks to the unique ability to turn anyone into a DedSec hacker, Watch Dogs: Legion is a damn good time
The Good
Play as anyone is a neat mechanic
Compelling narrative and setting
Love the British slang and accents
Good level design
Spiderbot rules
The Bad
Loading screens
Lip-syncing is well off
Some performance issues
8
Get Around It
In this article:Hacking, London, watch dogs, watch dogs legion, yeah alright guv, Zach Jackson