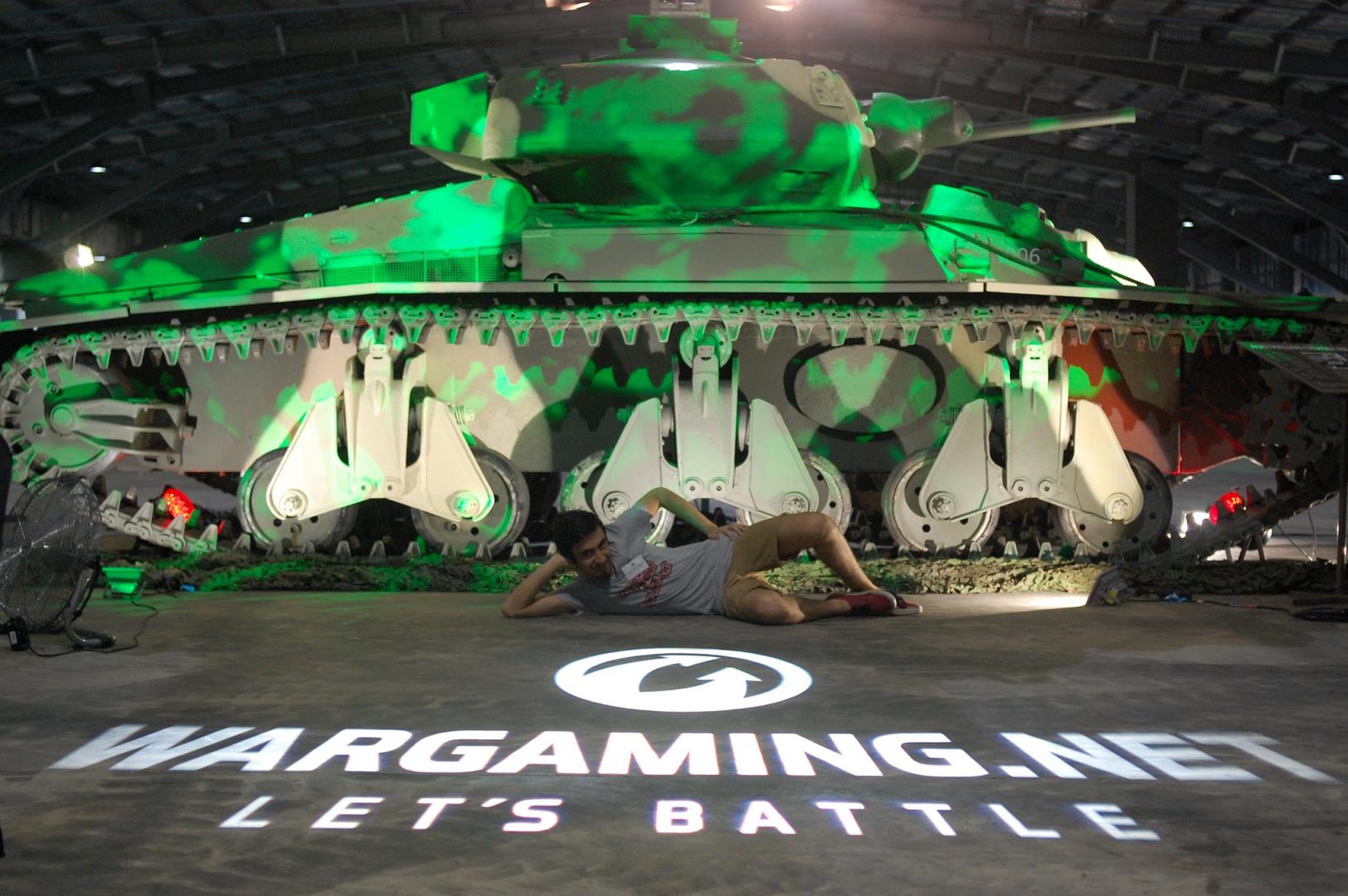 Recently I flew up to the lovely, humid city of Cairns to attend a PR event hosted by Wargaming Asia, the masterminds behind the incredibly popular World of Tanks. After being greeted at the airport and driven to the hotel, I became acquainted with Thomas Gribben of New Game Plus (link will be provided in article) and we decided that when it came to interviewing Alexander Bobko (Head of Global Marketing Projects, Wargaming), he and I would collaborate to make a mega deluxe super interview (transcript below). After meeting up in the lobby of the hotel, we were greeted by the lovely faces of Rebecca Wallisch and Danielle Swiecki (the lovely PR representatives of the event) before being escorted to The Australian Armour & Artillery Museum. After mingling for a bit and attempting to look professional, we were seated in front of a projector screen. It was here that we were informed what the event actually was and what it meant for the museum. Namely, we were there to witness the reveal of the restoration and return of the AC1 Sentinel Tank (a tank designed by the Australians during WWII and was the first tank to be built with a hull cast as a single piece). There are only three remaining in the world, and this particular one had made a very long journey from the US in order to finally make it back to its Aussie home. At the event, we were also given the opportunity to interview Alexander Bobko. The video interview can be viewed below or by clicking here (time stamp at 7:11).

DYEGB: This isn’t Wargaming’s first time with the restoration of a historical war vehicle, can you tell us about previous projects you have worked on?

Bobko: Sure. Today we open the AC1 Sentinel, not just on restoration, but returning it after it was moved from the United States to Australia. So yeah, it’s a very big project, very big gesture of homage to our Australian community who have supported us over the years. Alongside this we are launching the AC1 Sentinel Tank in World of Tanks and World of Tanks Blitz which is available throughout the world, so it’s a very important day for us. This isn’t the first time we have participated in these kind of heritage initiatives; several tanks have been restored to fully moving condition like the T34-76, T34-85 and tank destroyer SE100. We have also taken part in several projects dedicated to planes as well.

DYEGB: What was the development cycle like for implementing the AC1 Sentinel into World of Tanks?

Bobko: Well when it comes to the development side, it takes roughly about half a year to implement a tank into the game. In some cases more, in some cases less. In general, it all starts with the 3D scanning of the model because our tanks in games are based on the real references and real blueprints that we have acquired from museums and archives. It is a very long process, when you make the 3D model you need to make sure it fits the game balance, it fits and satisfies their requirements from a historical standpoints and it needs to be really fun to play.

DYEGB: Would you say that with the way the tank handles in the game, it has been tweaked a lot even though it has to kind of match the historical authenticity of the tank itself?

Bobko: Well it’s always a question of balance. There are some tanks that are in the games that never existed in reality that were made purely based off of blueprints or they were made only as prototypes, but the  majority of the tanks that are present in World of Tanks all existed, and are all based on real models, same with the warships.

DYEGB: In your presentation you briefly touched on VR support for World of Tanks, so how does VR coming into the scope of gaming nowadays affect the gameplay and are there any new features being added to support VR in World of Tanks?

Bobko: At this stage it is too early to say anything about a special edition of World of Tanks for virtual reality because we have experimented with that for a long time already. Two years ago we released a mod for the Oculus Rift, but it was still too early for the VR industry, however we do want to be a part of that trend which is why we film the documentaries and virtual tours in the 360º video format.  At the grand finals in Warsaw next month we will be presenting the new way to experience World of Tanks in VR.

Ignoring the humidity of Cairns, the trip was a great opportunity to witness Wargaming getting behind another restoration as well as giving us an opportunity to pick Alexander Bobko’s brain. For those who are wondering, the AC1 Sentinel Tank is currently available for play in World of Tanks. The game itself is free-to-play and is available on PC, Xbox 360, Xbox One and PlayStation 4.