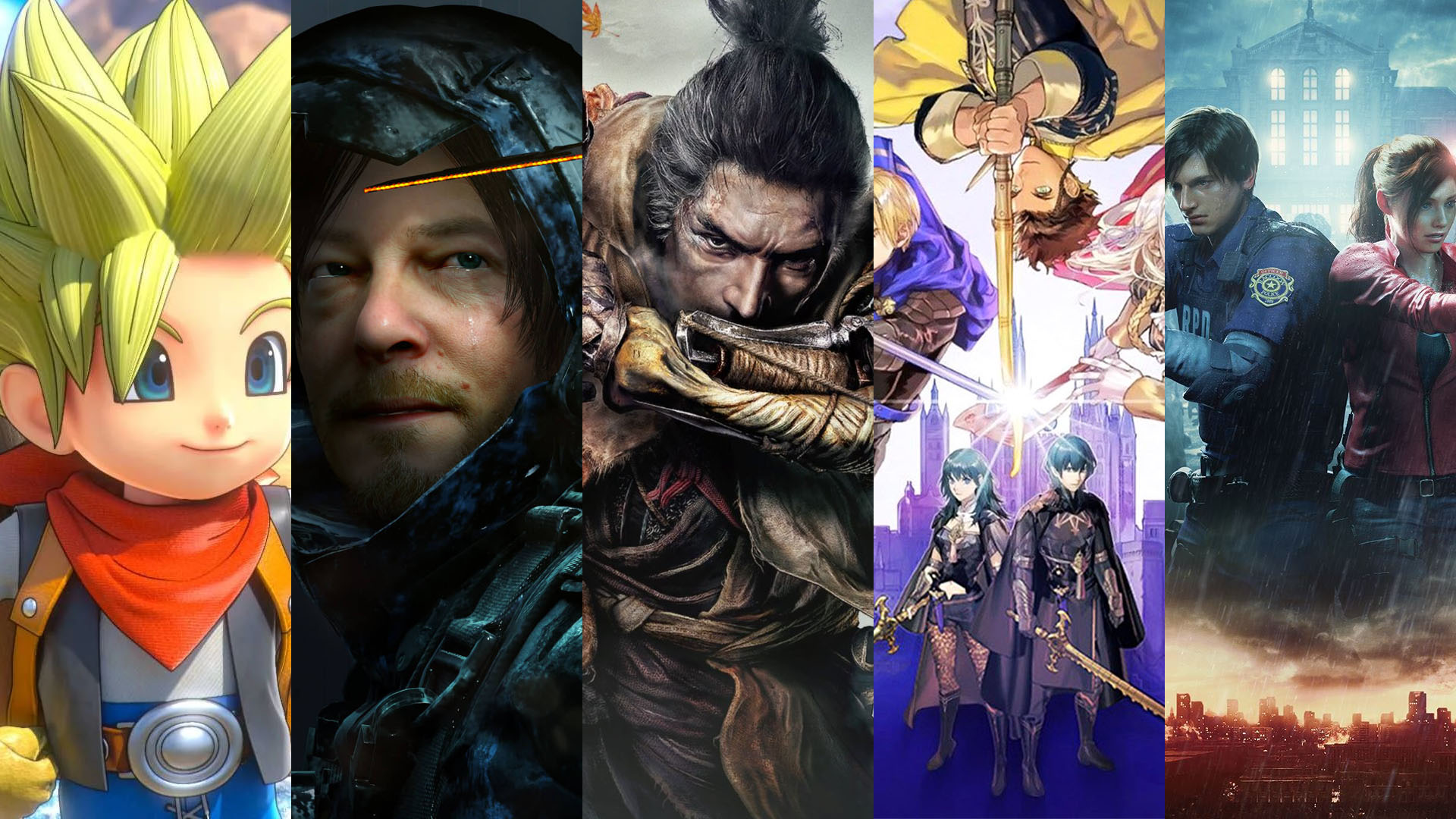 If you’re not down with the corporate razzle-dazzle that is The Game Awards  why not peruse the titles that won the hearts, minds and jorts in the humble WellPlayed office this year? Scroll on intrepid internet traveller for our GOTY picks of 2019. Also be sure to check out WellPayed’s official Game Awards here.

FromSoftware excel at making games that challenge, punish and intimidate, yet somehow remain fair. Sekiro: Shadows Die Twice is an innovative evolution of the developer’s core gameplay ethos and is by far the hardest and most rewarding game I have ever played. Sekiro made me feel like a clumsy child and unstoppable katana-wielding demi-god in equal measure, and I loved it. Brilliant, nuanced, well-executed core gameplay and a breathtaking visual design and sense of setting make Sekiro a triumph for a studio who can seemingly do no wrong (except Bed of Chaos, but we don’t talk about that).

Seldom do I ever manage to finish a 40+ hour game, yet with Fire Emblem: Three Heroes, I did so within a week and immediately jumped back in to play it even more. Yes, the game was required to be finished for review, but even then, no game this year ever had me nearly as captivated. The gameplay is tight, the soundtrack is banging and the narrative is epic with myriad twists and turns. Prior to Three Houses, I enjoyed the Fire Emblem games, but I wasn’t ever truly enamoured by them, but the sheer excellence of Three Houses had me gripped. Regardless of whether you are a Fire Emblem novice or veteran, Fire Emblem Three Houses demands your time.

Game of the Year: Resident Evil 2

A lot of the discourse surrounding 2019’s roster was that it was a lean year with very few standout titles. I beg to differ. In fact, I would say on paper that 2019 was a very strong lineup, which is evident by just how hard it was to pick a game of the year. This year was the first in a while where I was genuinely torn between two games, and quite frankly they both deserve the Game of the Year label. Ultimately I couldn’t go past Capcom’s reimagining of Resident Evil 2 – a game whose original release is my favourite game of all time. It successfully captures and modernises the terror that made the original such a landmark title with tight and challenging gameplay, jaw-dropping and visceral visuals and incredible sound design. Resident Evil 2 sets a new standard for remakes and is proof that if done right remakes can be more than a cheap cash grab.

Game of the Year: Death Stranding

Whether or not Death Stranding goes down as a ‘good’ game in the eye of the general public, there’s no arguing that it’s an important one. Despite the obscene amounts of money thrown at it, Death Stranding is an independent release through and through. The fact that the meme of ‘Sony gave Kojima a blank cheque and he used it to make his friends do weird shit’ rings completely true, and yet the team at Kojima Productions managed to rein that all in to somehow be one of the most consumable and least wanky joints to ever sport the Kojima name is surprising. Death Stranding isn’t ‘fun’, in the traditional sense, but it’s a fascinating case study into how successful a game can be in spite of that. Sure it’s not for everyone, and I’d be hard pressed to fault anyone for not liking it, but I feel (and I hope) that it might someday represent a turning point in how we look at games, especially in the AAA market.

This was a tough choice for me this year, so many great games have graced my console. I was a fan of the original Dragon Quest Builders and I was hoping for this sequel to be just as good if not better and it didn’t disappoint in the slightest. This game is an absolute sink for time and there is so much to do. You can be creative, the writing and the story are interesting, all of the quality of life improvements are amazing and it’s very hard to put down, hence why it has the most hours of any game I’ve played this year. Honourable mention to Pokemon Sword and Shield and Fire Emblem: Three Houses.

Now I quite enjoy both Battlefront 1 and 2, despite them both having fairly glaring issues, but I would be lying if I told you that I haven’t missed the singleplayer Star Wars games of yore. The Jedi Outcast series are some of my favourite titles of all time, largely thanks to the impressive lightsaber combat and interesting characters. In steps Fallen Order, a return to lightsaber swinging, exploration-filled adventures in a galaxy far, far away. And what a return it is. Difficult and rewarding gameplay, a story that spans across multiple planets and customisation options up the wazoo hooked me in immediately. Respawn clearly has a love for the source material as well, because everything in Fallen Order sounds, looks and feels like Star Wars. That might sound like nonsense, but as a lifelong fan of the franchise I appreciate that thought that is put into every detail.

Was there ever even an argument that this wouldn’t be my GOTY? My love for FromSoftware aside, Sekiro: Shadow Die Twice is just in a league of its own. The atmosphere was incredible and everything about the game just exudes quality. It is arguably FromSoft’s best work yet, a hard title to take from the likes of Dark Souls and Bloodborne. The game deservedly won GOTY from The Game Awards this year and I’m very excited to see what FromSoftware does with Elden Ring, whenever that releases. Honourable mention goes to Monster Hunter World: Iceborne as well, that put up a good fight for my GOTY.

Game of the Year: Judgment

Since being introduced the Yakuza series about two years ago, it’s been a long journey of going back and experiencing the series. But that journey was put on hold when developer Ryu Ga Gotoku Studio released their new game/spin-off title, Judgment. Judgment took the engine that was used for Yakuza 6 and used it to create a new world inside the city blocks of Kamurocho. Playing as a lawyer-turned-detective was an excellent way to shake up the kind of narrative you could experience, all the while still holding true to the amazingly over-the-top combat, hilarious side quests and twisting and turning story we expect from a RGG Studio game.

The last Fire Emblem game I played, 2012’s Awakening, was a dating sim. There was some good strategy gameplay in between the character interactions, but it was the latter that stole the show. Especially when Sumia and Miriel got involved. Tharja is a foul temptress and deserves our scorn. So when a trip to Japan and the subsequent long flights and shinkansen rides beckoned, I turned to the Switch’s installment of the long-running series. What followed was hours upon hours, even when the trip was done, of finding out which girl I liked best that day. Just as I determine how good my day is by how many dogs I see in it, my taste in games is somewhat (but not entirely) driven by how cute its girls are. Three Houses just so happens to have cutie cowadooties in spades.

Game of the Year: Mortal Kombat 11

Off a base metric, what game brought me the most joy this year? Simple – Mortal Kombat 11. I have sunk hundreds upon hundreds of hours into the game, with every new fighter and challenge re-energising my time with the game. It’s almost sinister in how deep it eventually sunk it’s claws into me – I found myself working to master characters that I previously didn’t give two shits about. Oh Ed Boon, you cruel mistress.

Game of the Year: Resident Evil 2

While many years have a clear front runner for game of the year, this year was a little tougher to choose. Titles like Sekiro: Shadows Die Twice or Death Stranding deserve the honour to be sure, but Resident Evil 2 receives my vote for this year. While technically functioning as a true successor to Resident Evil 4 and a horror title that reinvigorated both the franchise and the genre, I almost disqualified the game purely because it was a remake. But underneath that label is so much more pushing their proprietary engine to the next level, created an incredibly tight and intense experience. It gets so much right and it would be unfair to not acknowledge it for all it’s done. Bring on Resident Evil 3!