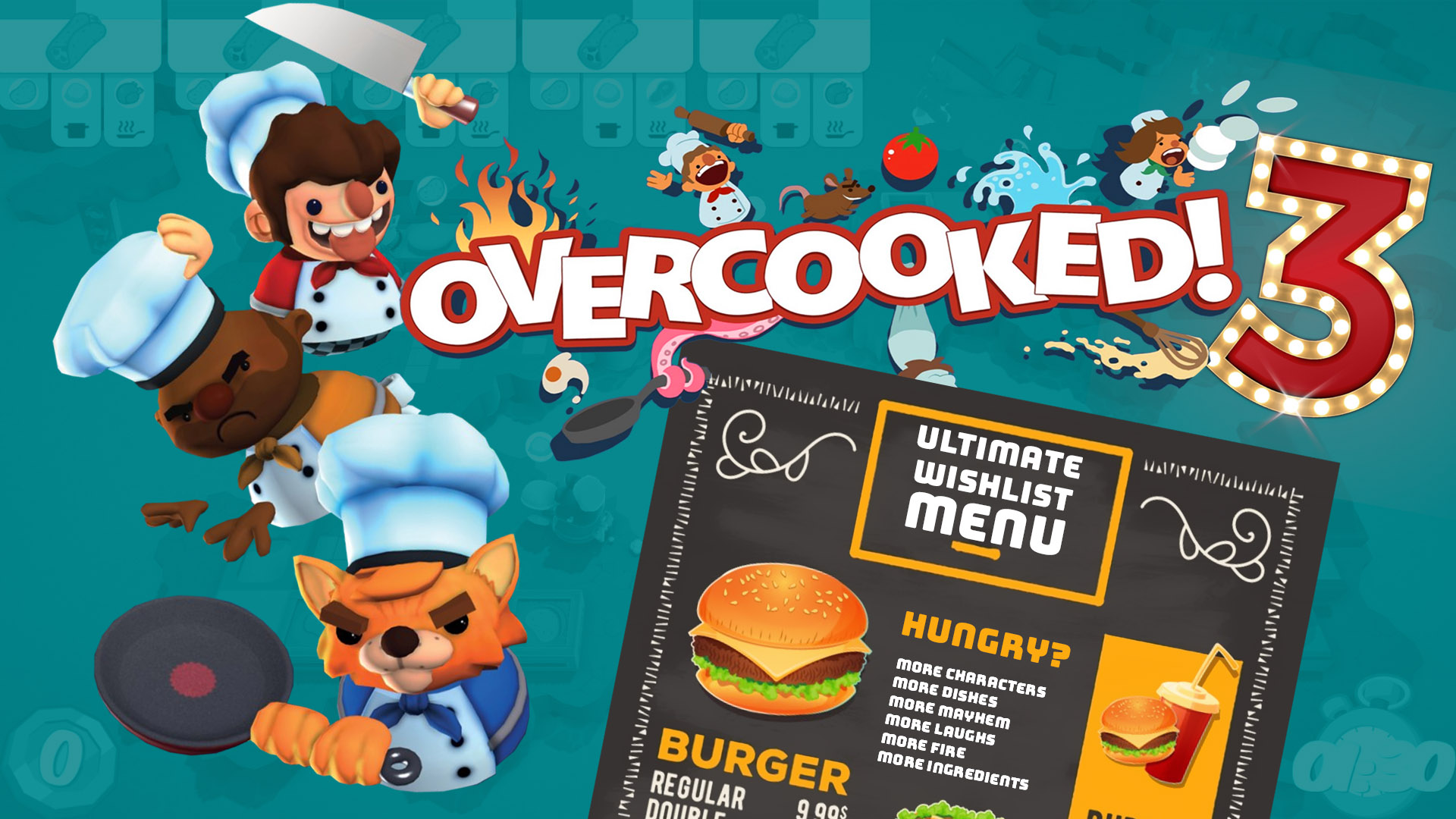 There’s no denying that Overcooked has been a huge success for both Team17 and Ghost Town Games, with the party game series causing all kinds of chaos in the kitchen and on the couch. Since its release in 2018, Overcooked 2 has been continuously supported with DLC – both free and paid – that has kept the fun and chaos going. But what about the future of the series? While Team17 has been keeping mum about a potential Overcooked 3, you’d expect that they wouldn’t have closed the kitchen just yet. As such, we’ve had a think about what could improve the menu in Overcooked 3.

Overcooked 2 has a total of 54 cooks to unlock via gameplay and DLC. We would love to see even more cute animal characters and maybe some ironic ones – how about food-related chefs for one (like an onigiri or French fries)? Why hasn’t there been a frog chef yet? Also the unicorn chef from Overcooked 2 must return, ok *points knife*? Plus, maybe some light customisation options to personalise your chef would be a good inclusion.

Savoury recipes overwhelm both Overcooked 1 and 2. Sure there was the Christmas expansion that was solely sweet, and the s’mores in the Campfire Cook Off DLC, but there are so many other sweet options that could be integrated into the next game to even things out a bit. Ice cream! Brownies! Variety is the spice of life. In addition to more sweet recipes we want to see some more multi-component recipes join the game. Give me lasagna (boil pasta, cook meat, put in a tray and oven bake), curry (chop veggies, chop different meat, cook in pot), paella (chop seafood, chop vegies, cook with rice in pot). Seriously how is curry for one not in the game yet? Maybe even throw a bit of Aussie cuisine in there: sausage rolls, meat pies, chocolate crackles or a good chicken parmigiana.

Some of the cooks from the Overcooked 2 kitchen (image credit)

Currently you play the game level by level, achieving a certain star ranking, and then spend these stars to unlock the following levels. There’s nothing wrong with this formula, but the game could be further enriched with a secondary currency. Maybe you could get costumes or customise the inside of your vehicle – the options are endless. An extra reason to potentially replay levels is always good for the longevity of a game.

Achievements in the Switch version

Overcooked 3 on the Switch is a no brainer. The other versions of Overcooked 2 come with achievements, but not on the Switch, and it be great to see them implemented in the Switch version for the next game, if for nothing more than my own personal gratification. Furthermore, it would be awesome to see some weird, wacky and obscure achievements, they’re always tasty.

Overcooked is at its best when you’re playing with friends; yelling at each other is always fun, and Overcooked 2 did introduce online multiplayer as an alternative. But what if you have no internet and you’re stuck at home (i.e. our current times)? It would be great to see some single-player levels that are not going to drive you crazy. Sure you can play the current game by yourself but it’s not really how it’s designed. Wouldn’t it be nice for there to be a separate story or tasks that you could undergo by yourself, maybe they could be themed by cuisine. Maybe you can play as Kevin and go on an adventure collecting ingredients? Surprise me!

The kitchens became even more alive and frustrating in Overcooked 2, but that’s part of the fun. You think you’ve figured out your strategy and then all hell breaks loose when your kitchen crash lands and oops you now have to make something completely different. We want to see this return and become even more dynamic than before.

Give us crazier kitchens!

Overcooked 2 threw in the option to hurl things around the kitchen. This introduced more strategy as well as increased complexity and puzzle elements to the gameplay. One little thing we want to see added is some sort of guide as to where things are going to land. I see it as an accessibility thing, you could be rushing so much that you don’t use it but it would be nice to have the option to see a little clearer, especially when aiming for certain tiles on the run. I think the challenge will still be there with the inclusion of such a feature, so I only see it adding to the game’s quality of life.

Overcooked has always been fun but challenging. Sometimes the game’s blueprint of having to unlock levels by three-starring previous levels can lead to some players simply not able to progress. Perhaps having some options to make the game more accessible would open the game up to more players. Team17’s other party game Moving Out showed us that having options to tailor your experience is a good thing.

This one might be a little hard to pull off, but if players had the ability to create kitchens and upload them for other chefs to play it would be a neat feature. Just think of the chaos you could cause – the kitchen could be your oyster!

This is a pretty decent-sized meal of additions, but even just a few of these would make the next game that much more fun. Here’s hoping that Team17 shares the secret sauce recipe of Overcooked 3 sooner rather than later, we’re hungry for new forms of chaos! What item on our menu would you order?

In this article:overcooked, Overcooked 3?, team17