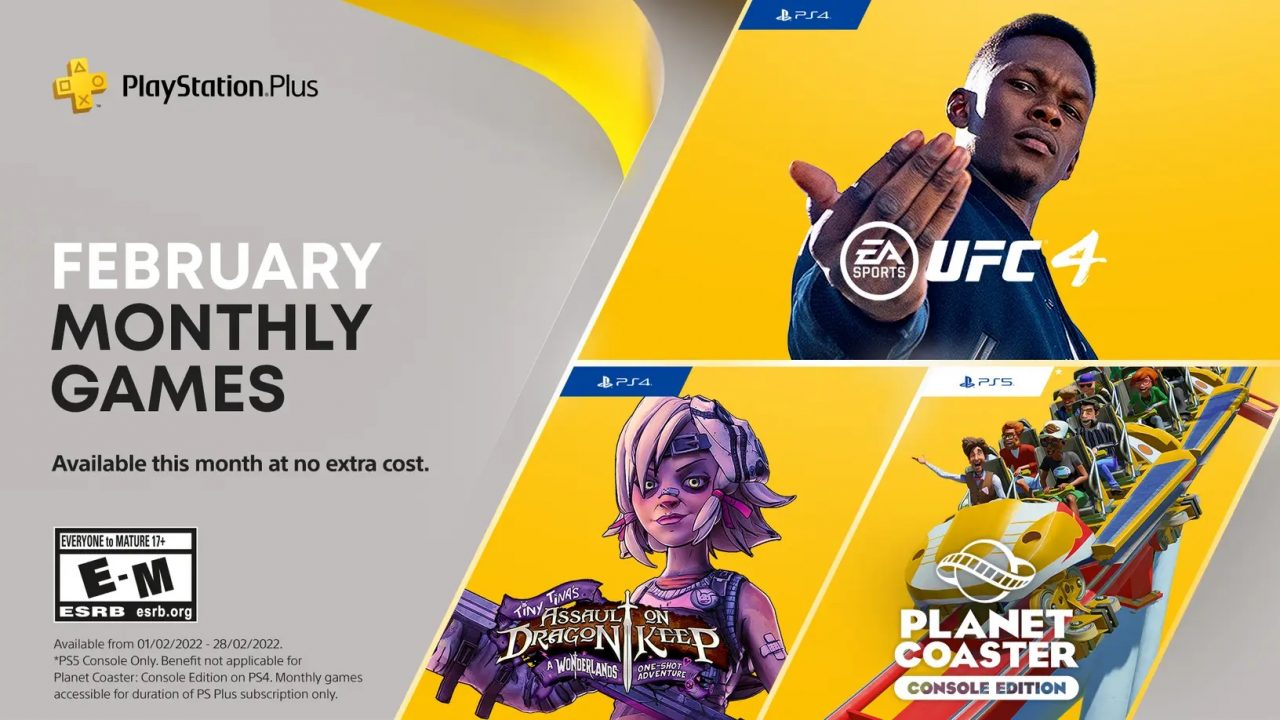 Good lord, the first month of 2022 is coming to an end already. February is a beast of a month for game releases, with Dying Light 2 Stay Human, Horizon Forbidden West and Elden Ring releasing just to name a few. Sure, those heavy-hitters will likely demand most of your attention, but there’s a new batch of PlayStation Plus games on the way to fill in the gaps between the new arrivals. In January we were given Deep Rock Galactic, Dirt 5 and Persona 5 Strikers which, if you’re anything like me, resulted in your spending most of your gaming hours mining for minerals.

It was announced on the PlayStation Blog that February’s line-up will consist of UFC 4, Tiny Tina’s Assault on Dragon Keep: A Wonderlands One-Shot Adventure and Planet Coaster: Console Edition. These titles will be available to download from February 1, so be sure to clear some space on your console.

Very little introduction is needed here, but I suppose IT’S TIME to talk about UFC 4. Stepping into the octagon as a male or female fighter from a range of weight divisions, you’ll throw punches, attempt takedowns and try your best to knock out or submit your opponent. Throwing bombs while standing is made to feel authentically brutal, while an improved ground game makes mat work more fluid.

Seeing life originally as an expansion for Borderlands 2, Tiny Tina’s Assault on Dragon Keep: A Wonderlands One-Shot Adventure is now a standalone experience that will get you all warmed up for Tiny Tina’s Wonderlands. Heavily-inspired by D&D, Assault on Dragons Keep sees your Vault Hunters playing a game of Bunkers & Badasses, run by the titular homicidal teen. Taking a more fantasy route, you’ll still have all of the looting and shooting present from Borderlands, but expect plenty of crazy shenanigans to occur.

I’m sure that most of us haven’t been able to visit an amusement park lately, right? Well, why not build your own? Planet Coaster: Console Edition allows players to use over 700 objects to create their dream park while tending to the needs and desires of the guests. That or just make lines unnecessarily long and prices unnecessarily high to keep it realistic. Please note that Plant Coaster: Console Edition will only be available on PS5.

If you still haven’t downloaded Deep Rock Galactic, Dirt 5 and Persona 5 Strikers, you’ve got until January 31 to do so. Don’t forget, you can always add them to your library and download them later.

What do you think of this line-up? What would you like to see added in March? Let us know in the comments or on our social media.