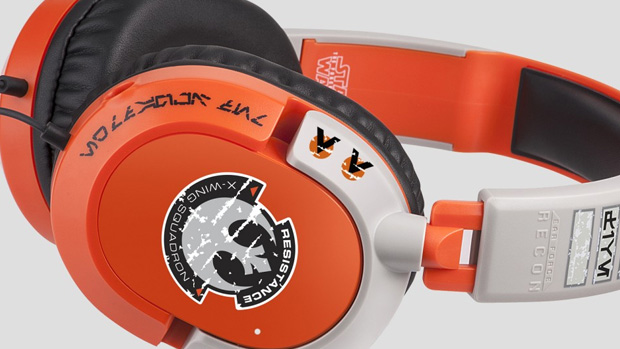 As someone whom often enjoys playing at night (especially when a Destiny raid is taking way longer than it should) I often find myself in need of a private sound system that won’t keep my entire family awake late at night. Another thing to note is that I do quite often like to listen to my own music while playing games, and my family doesn’t often appreciate the br00tal metal that would blast from my TV speakers. Now I know what you’re thinking, “Jordan, why don’t just turn the speakers down?” No! That will not suffice! So as a Star Wars fan and a bit of a cheapskate I decided to sink $99 AUD into a Turtle Beach Star Wars-themed X-Wing Pilot Headset.

I feel like a part of the Red Squadron

First of all, the X-Wing Pilot Headset (hereby referred to as “XPH”) is a bright orange colour with grey and black features on the sides and interior. They are an over-ear design which have comfortable leather cushioning on the perimeter of the 40mm speakers which do deliver quite a clean and crisp sound, allowing for full immersion into any game or audio-based activity. The headset relies on an 3.5mm audio jack to deliver the audio information, meaning that they are not wireless and can be used on anything that allows your standard headphones (phones, computers, 3DS etc…), which is a very useful feature as it allows for the headset to be multipurpose. For listening purposes, this headset offers more than what your standard gamer needs in order to be comfortable with the $99 price tag. Now let’s get to the next goody that comes with this headset. The XPH comes with a high-sensitivity, removable microphone. For those of you who know your audio tech, this is more or less a condenser microphone with a slightly smaller diaphragm. For non-tech people, this means that the mic will more or less pick up anything in your standard room with ease. This microphone also comes outfitted with a pop-filter cover, meaning that wind brushing past, heavy breathers or people who pronounce the letter ‘p’ harshly will not affect the listeners on the other side of the microphone adversely. As someone who is incredibly unfit and gets out of breath by moving joysticks, this is fantastic as my friends no longer have to put up with the constant sound of my laboured, sporadic breathing patterns.

For functionality, the XPH comes with less features than something like the slightly pricier PX24s, only allowing for volume output controls on the speakers and a mute function for the microphone. In that sense, the XPH is a little more constricted as to what you can do, but honestly, that isn’t a real drawback as it is still only $99 and for your standard gamer, it offers what you need. The casing on the outside of the XPH is plastic and there isn’t really all that much cushioning for the top of your head, but I never really experienced any discomfort while playing. The only real negative I can say is that the XPH have a tendency to make a loud squeak when moved around on your head, so much so that the squeak actually is transmitted through the microphone. No pop-filter can fix that.

Overall, if you are on a $100 budget for a reliable headset, the Turtle Beach X-Wing Pilot Headset are a great buy. They offer simplistic functionality with a cool design and a good quality microphone which can also be detached, allowing for it to be used quite easily in other aspects of day-to-day life (like looking pimping on the bus or in the office).

This headset can be purchased from JB HiFi (in-store), EB Games and Kieran’s cousin Ray.