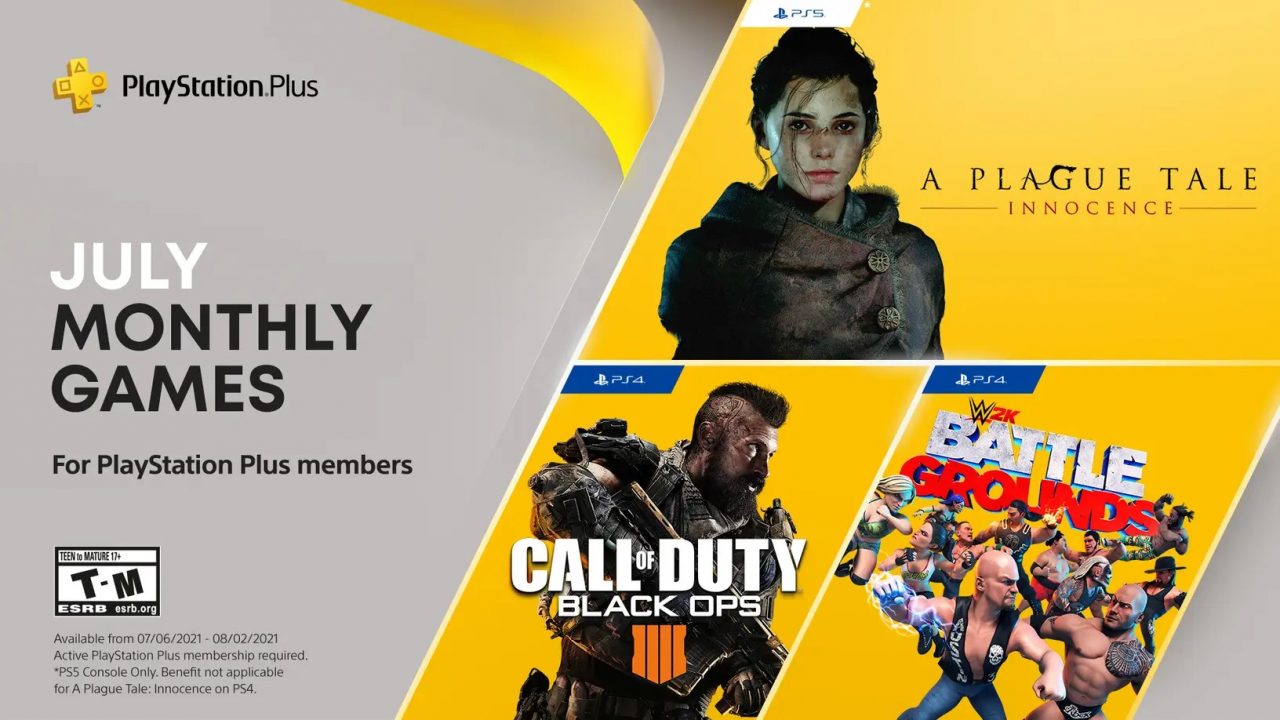 Alrighty, it’s a new month, meaning there’s a new batch of games heading to the PlayStation Plus service, so let’s take a look at them. Last month we got Operation Tango, Star Wars: Squadrons and Virtua Fighter 5 Ultimate Showdown, making for a very varied mix of experiences. Announced on the PlayStation Blog, this month’s lineup will be similarly varied, with PS Plus members having access to A Plague Tale: Innocence (PS5), Call of Duty: Black Ops IIII and WWE 2K Battlegrounds from July 6.

A confronting and brutal narrative-driven singleplayer game, A Plague Tale: Innocence has you playing as Amicia as she attempts to keep her little brother Hugo safe in a 14th-century France filled with oppressive Inquisition soldiers and, as the title hints at, a plague of deadly rats. We loved A Plague Tale (giving it a 9) and think that everyone should get around it if they haven’t already. It’s important to note that A Plague Tale: Innocence will only be available to PS5 players, which does come with some advantages. This version of the game will feature fast loading, a 4K resolution, improved visuals and it’ll run at 60fps.

We have a strong, story-based game, now let’s jump into some action. A series first for Call of Duty, Black Ops IIII is an entirely multiplayer-focused experience that includes three distinct game types. First is the suite of classic multiplayer modes that you would expect from a Call of Duty, second is the fan-favourite zombies modes and lastly, there’s the battle royale-like Blackout mode. Not everyone enjoyed the firm pivoting towards multiplayer, but if you’re a fan of getting your mates into a squad and having a blast, this will be one for you (we gave it an 8.5).

So far in this month’s lineup, we’ve got a serious narrative experience and a competitive online game, so what we need now is something a bit more casual. WWE 2K Battlegrounds definitely fits that bill. As you would expect from the title, Battlegrounds is a wrestling game, but it’s a far cry from 2K’s usual attempts at simulation. This one is a stylised brawler that has more of a focus on crazy, colourful and outlandish moves that are to be used on player two who’s sitting with you on the same couch. It’s got flaws, namely the harsh microtransactions (the main reason we gave it a 6.5), but hey, it’s free this month and you’ll get some brief entertainment out of it, so there are more positives than negatives here.

Be sure that you have Star Wars: Squadrons and Operation Tango downloaded (or added to your library) before they leave the service on July 5. Don’t stress too much about Virtua Fighter 5 though, as that’ll be sticking around for another month.

Which of these free games are you most excited about? What would you like to see added next month? Let us know.