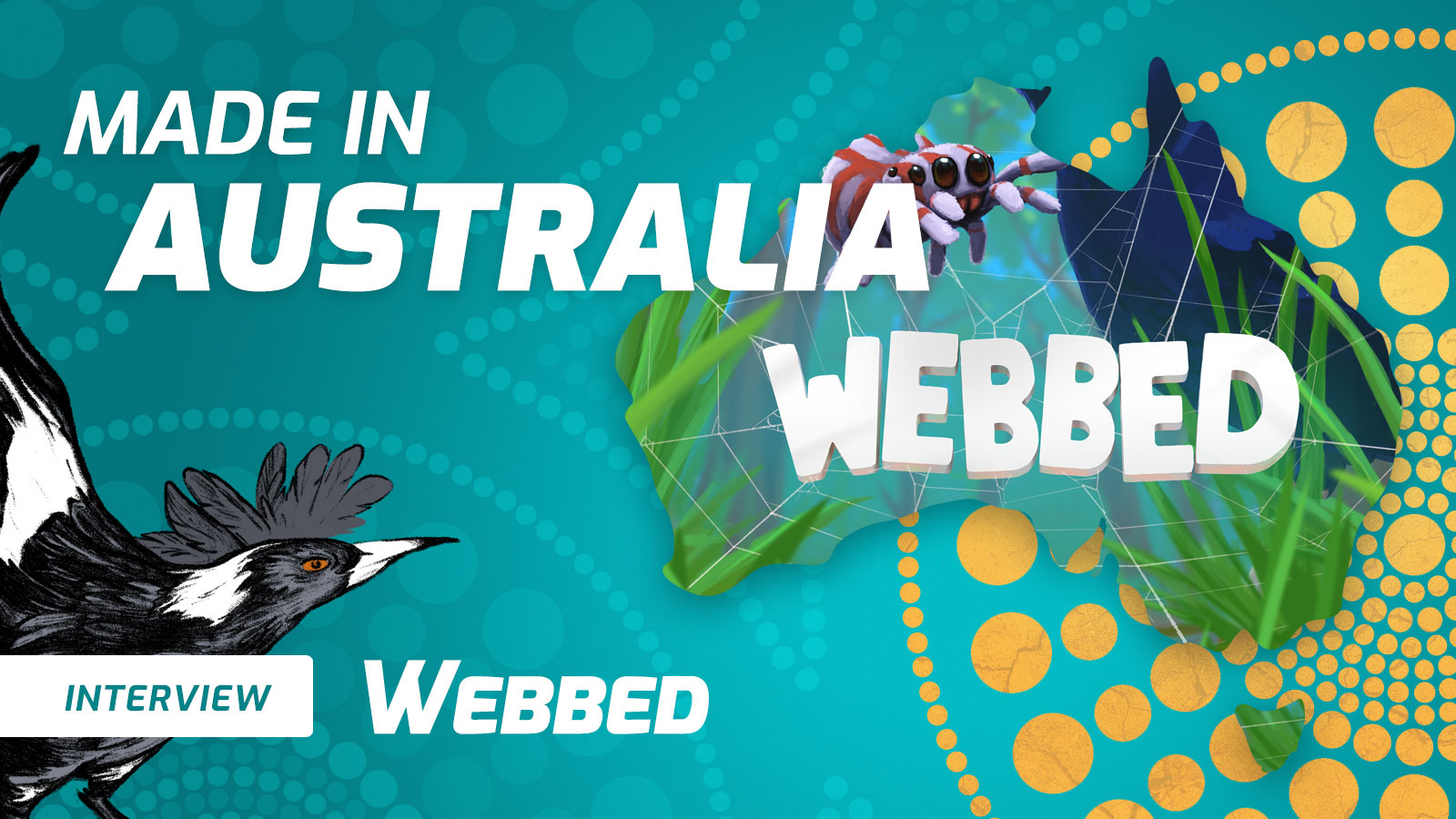 For a lot of people, the sight of spiders is enough to make their skin crawl, and while I am not one of these people, spiders aren’t the number one bug on my list (slater bugs forever!). However, I will admit that the tiny jumping spider is a rather cute specimen – I mean who doesn’t love a cute little spider that dances? One studio that does love jumping spiders is the Brisbane-based Sbug Games, with their upcoming platformer Webbed staring one as the protagonist. As part of our Made In Australia segment, we sat down with Sbug Games’ Riley Neville and Noah Seymour to chat about the game ahead of its September 9 launch.

Riley Neville: It’s a 2D physics-based platformer where you play as a happy little spider whose boyfriend has been kidnapped by a big mean bowerbird. Using your web skills, swing around the bush and help out friendly bugs to get allies in your daring rescue mission.

WP: How did you come up with the game’s premise? Why a jumping spider?

RN: The initial prototype started as a 2D demake of Just Cause 2. You had a grappling hook, a parachute, and a laser blaster. Once I realised I could make grappling hooks attach to other grappling hook ropes, it immediately felt like you were building a web, so the pivot to a spider game came pretty naturally. Grappling hook turned into web-swinging, parachutes could be leaves, and the lasers are obviously shot from the spider’s eyes.

Noah Seymour: Jumping Spiders are incredibly cute. They have massive eyes and are very emotive when they look at the world around them. This makes them a prime candidate once you decide to make the player a spider. Also, the peacock jumping spider has a very charming dance, which we decided every spider should be able to dance like them.

WP: What are some of Webbed’s influences and inspirations?

NS: I had been working on and off on a game about a different spider, called A Mess Of Legs. It was a game where 1 to 8 players would all control the individual legs of a spider to walk and solve button puzzles to reach a fly. I’d been bringing it to a local gamedev meetup that Riley and I both attended called Squiggly River Games Collective. It was a lot of fun and left both of us with spiders on the brain.

RN: Some of my favourite games growing up were character platformers like Spyro The Dragon and Jak and Daxter. A lot of the character design, world layout, and collectathon gameplay in Webbed is heavily influenced by games of that era. I definitely got the idea for a skateboard level from Spyro.

WP: When did development on Webbed begin?

RN: I started work on the initial spider prototype at the end of 2019 and then production really picked up when Noah joined the project in February of 2020 at the last in-person Squiggly River meetup before the pandemic hit.

WP: Webbed uses an almost hybrid pixel art style, why did you choose this style?

RN: I think cartoony pixel art is just a pretty economic style for small game developers where art isn’t your whole job. It takes a lot less time to produce sprites at 32×32 pixels, and the retro aesthetic has a lot of charm to it. All the bugs in the game are also fully procedurally animated which is not only a lot faster to do than traditionally animating characters, but it allows you to program in a level of responsiveness to the environment that makes the characters feel much more lifelike. Unfortunately it doesn’t scale very well to larger and more complicated characters, which is why the bird is only partly procedurally animated.

WP: Talk to us about the gameplay, what exactly do you do in the game when it comes to objectives?

RN: There’s a bunch of things to do in the game. The core mechanics revolve around using your webs to navigate the world, or move physics objects around. That can be anything from swinging through a maze of deadly thorns, to helping some ants build a giant mech-ant. There’s also a skateboarding section.

WP: From what I have played, the game is very much about staying on the move, but it also gives players the option to take things slow, giving them the choice in terms of how they want to play. Was the game designed with this in mind or is it something that evolved during development?

NS: From the start we were aiming to make space for both steady and fast-paced players. This was helped by the way the game works to allow swinging, with grabbable surfaces and space to swing, inherently allowing the player to build a web through the same space. Also, creating a space in which the player cannot build a web, but can swing, would be too complex to convey to the player. We also made sure to avoid time pressures in the game and use frequent checkpoints to keep the pace that the player felt most comfortable with.

WP: What was the most challenging thing about developing Webbed?

NS: It was reasonably tough designing a 2D skate park. I couldn’t find too many examples that weren’t either infinite runner style games (missing the ‘park’ part of skate park) or ones that were single half pipe games focused on tricks or simply gaining height. So I spent some time thinking about how classics like THPS(Tony Hawk’s Pro Skater) did it, with emphasis on skating lines and flow, with spaces to transfer between lines, which is super cool and interesting to do when you have a 3rd dimension to cordon off spaces and make certain areas more focused on specific styles of trick. But I was able to take lessons from that and created a space with zones dedicated to trick style, but with elevation to distinguish the zones. I used jump gaps and took advantage of the grapple mechanics to allow the player to decide where their line will go when reaching an intersection point. Overall I’m pretty proud of how I did!

RN: The final section of the game was completely reworked at least three times. There were a bunch of versions of this floating rocks mechanic that we implemented, but ultimately it just didn’t work with playtesters who either lucked their way through or completely gave up. Lesson learned: don’t try to introduce brand new mechanics to the game at the very end.

WP: One of the game’s cool accessibility features is the Arachnophobia mode. What is this exactly and how did it come about?

RN: One of the consistent responses we got when sharing the game on social media was “This looks really cute, but I’m too afraid of spiders to play it.” This may seem like an insurmountable barrier for a game about a spider, but nothing about how the spider looks is actually critical to the gameplay. In the background it’s just a circular physics collider. So we spent a day and added the option to turn all the spiders in the game into friendly little blobs instead.

NS: I personally still loved playing in the arachnophobia mode, despite how much I love spiders. The pink ball the player turns into looks a little bit like Kirby with no feet, and you can roll around a bit like sonic! So much fun!

WP: The game’s demo was available during Steam Game Festival: Autumn Edition. How has the feedback been?

N: The feedback was super positive! Most people really loved the taste they played! We actually ended up with a somewhat heated discussion around whether lasers were the most realistic thing for a spider to have, which had the most comments out of all of the threads on the Steam discussion boards. Laser eyes are nothing when you see the giant mechanical ant in the announcement trailer in my opinion.

WP: How long approximately will Webbed take to complete?

RN: I think that depends on the sort of player. It is a relatively short game – the average playtester took a bit over 2 hours to complete the story – but to get 100% of the collectables, or if you just want to take your time spinning webs it can take a lot longer. We had some players spend multiple hours in the demo which we designed to be completed in about ten minutes.

This game has ants

WP: So far the game has only been announced for PC. Do you have any plans to bring the game to other platforms?

WP: Thanks heaps for your time. Good luck with the game’s release.

Webbed will land on PC (Steam, GOG and Humble Bundle) on September 9.