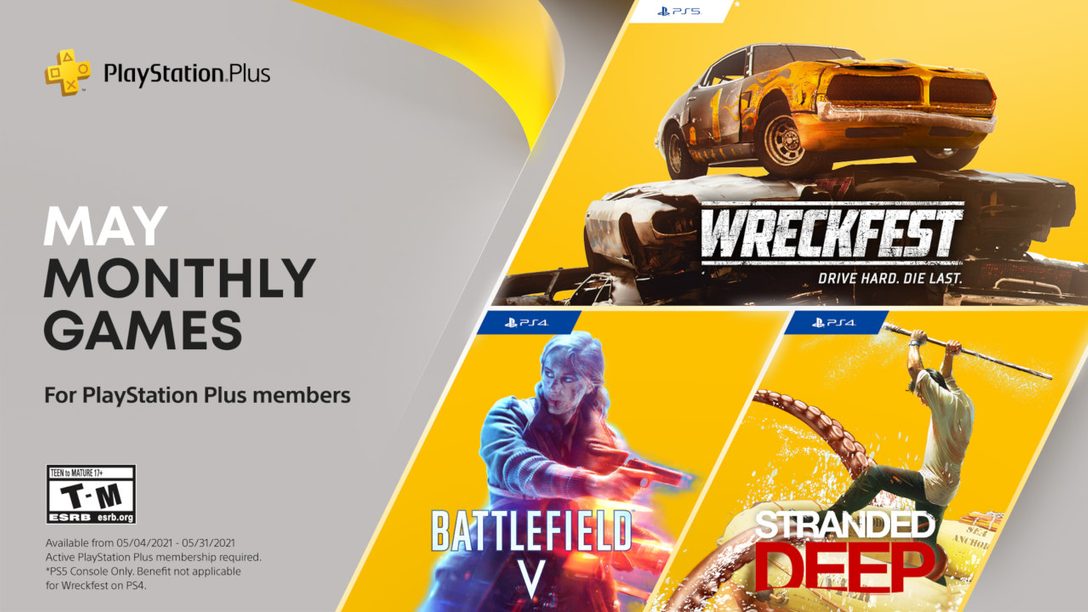 We’ve reached the end of another month and you know what that means? Another bundle of games will be hitting the PS Plus service for subscribers to enjoy. In April will were treated to the interesting mix of Oddworld: Soulstorm (which we gave an 8), Days Gone and Zombie Army 4: Dead War, but let’s not dwell on what was, let’s look at what’s to come. Over on the PlayStation Blog, it was announced that May’s free games will be Wreckfest, Battlefield V and Stranded Deep and that they’ll be ready for download from May 4.

Sure, you could always boot up Gran Turismo Sport, carefully and purposefully race around a track, shaving seconds off of your time and attempt to steal first away from your fellow professional drivers, but sometimes you just want to go full throttle and smash the shit out of the other cars around you. In steps Wreckfest, a racing game that encourages you to dent, scrap and destroy your opposition. Whether it be in a destruction derby arena or a more classic circuit, Wreckfest always offers up some vehicular carnage. Fun and frantic (we gave it an 8), this will be one you chuck on to relieve the stress from a long workday. It’s important to note that this is the PS5 version only and will not be available to PS4 users.

If our resident Call of Duty lover Kieran Stockton says that Battlefield V is a winner (we gave it an 8), you know that it’s worth your time. Large-scale online battles, excellent weaponry and the series’ trademark destruction are all present in this WWII outing and it makes for one hell of a good time. Speaking of time, you’ll need to set aside a fair bit of it if you want to play through a whole online match, but your investment will be worth it when you mow through a whole enemy squad with a tank, trust me.

Once you’re done wrecking cars and destroying buildings, you might want to sit back on a tropical island and relax. Oh, wait, Stranded Deep is a survival game that sees you deserted on a Pacific island with no obvious means of rescue or escape, maybe it won’t be so relaxing. You’ll have to craft, hunt and explore to survive your isolating situation and the waters surrounding you might not be filled with the friendliest of sealife.

Don’t forget, if you haven’t already downloaded or added Oddworld: Soulstorm, Days Gone and Zombie Army 4: Dead War to your library, you have until May 3 to do so.

Which of the three PS Plus games are you most excited about this month? What would you like to see added in June? Let us know.

In this article:free games, PlayStation, PlayStation Plus, ps plus, ps4, PS5, Sony, subscription