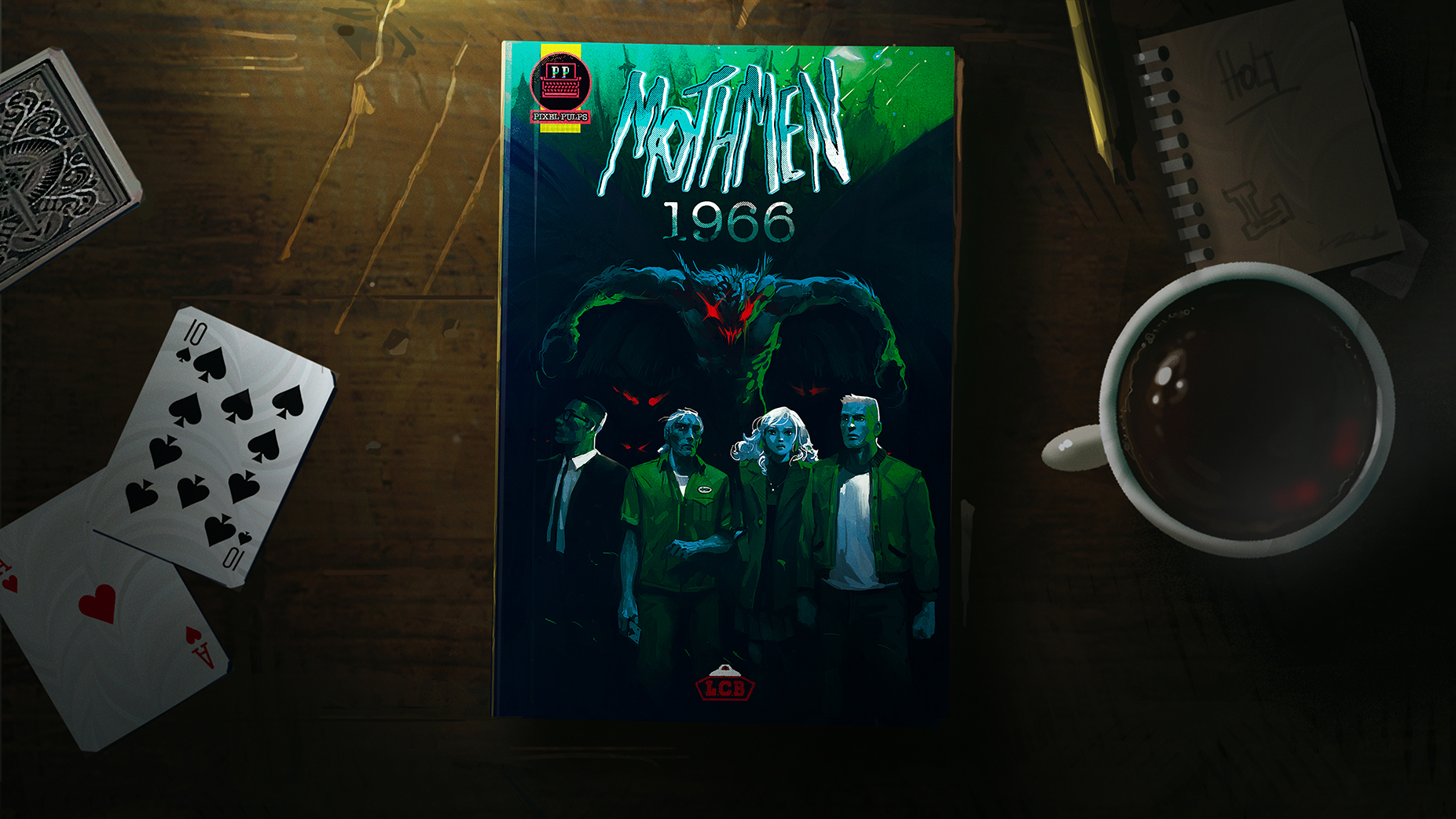 I’m not going to lie, I don’t know much at all about Mothmen. I know that they supposedly reside in Point Pleasant, West Virginia, and that they are an unsettling moth-human hybrid, but other than that, Mothman is nothing much more to me than a nickname I lovingly use to refer to anyone by the name of Timothy. Despite this, I couldn’t help but be drawn to Mothmen 1966, a unique looking visual novel that chronicles the otherworldly happenings of the Leonid meteor shower of 1966.

Although presented in an aesthetic reminiscent of 80s home computer graphics, Mothmen 1966 manages to provide a surprisingly immersive sense of atmosphere, with the action unfolding from the perspective of three different characters. There’s Holt, a gun-loving gas station owner, and making up the numbers are Victoria and Lee, a young adult couple who are in town to witness the meteor shower.

This bloke loves a game of Solitaire

Even though Mothmen 1966 is a short experience at only roughly two-hours long, the writing does a serviceable job of providing each core character with some backstory and personality. Holt for example takes care of his elderly grandmother and is obsessed with solitaire because his grandmother taught him how to play as a youngster. As for Lee and Victoria, you come to learn that the two met in college, with Victoria trying to come to terms with her unexpected pregnancy, and how that has caused her to question whether or not Lee is ready for fatherhood. This sort of information isn’t of utmost importance to the narrative at large, but it does help in making the characters feel more realistic and interesting.

From pretty much the get go, it’s clear that something isn’t quite right. Mysterious men in black suits are lurking around town, and everything feels a little eerie. When the mothmen finally arrive, things ramp up a notch, resulting in a more gripping second half of the experience. Assisted by a paranormal investigator by the name of Lou, it’s up to you to get the playable trio through the terrifying night, where conspiracy seems commonplace, and more than just mothmen pose a threat. The story told throughout is not only well written, but surprisingly atmospheric as well, with the retro visuals and quality soundtrack further strengthening the experience.

Mothmen as far as the eye can see

How does the gameplay fare I hear you ask? The experience of Mothmen 1966 is largely your typical visual novel affair with branching choose-your-own-adventure-style choices, however there are some small gameplay segments interspersed throughout that require some logical thinking and puzzle solving. Most require a bit of trial and error to comprehend, but other than that they’re fairly stock standard. One example is the segment where Lee and Victoria are surrounded by a pack of angry wolves, with the puzzle being to throw stones at approaching dogs while ensuring that they don’t get too close. There’s also an excellent solitaire mini-game that is insanely addictive for those keen on a challenge, and it’s even available to play outside of the story. While the basic gameplay isn’t going to knock your socks off, it does a just passable job of providing moments of interactivity in what is otherwise a passive experience typical of a visual novel.

Mothmen 1966 manages to be an entertaining little journey, however I did still have some issues with the experience at large. I’m a sucker for a short and sweet video game, the kind you can beat in the sitting, yet despite this belief, I can’t help but feel Mothmen 1966 is just a bit too short. Even another hour or two to put further meat on the narrative bone would’ve made it more impactful. The gameplay segments also leave a lot to be desired, which can be somewhat forgiven in a game of this nature, especially when the story hits, but I would’ve liked more involved and creative gameplay moments that weren’t just trial and error style puzzles that result in a failure. Whether or not you fail they feel a bit pointless too, given that deaths result in simply starting the segment from the beginning until you get it right.

Puzzles are fine but they aren’t the best

Mothmen 1966 is a short and sweet visual novel about a cryptid conspiracy and the citizens that get wrapped up in the events surrounding it. Despite being arguably too brief, the story it tells is intriguing, and is held up by well written dialogue, with the old-timey visuals and accompanying audio doing a solid job also. The basic puzzles leave a lot to be desired, but the solitaire mini-game is so much fun that I played it for almost the same amount of time as the experience overall. Overall though, if you’re a fan of pulp fiction stories or visual novels at large, I’d still recommend giving this one a look. Given it’s the first in a new series of bite-sized interactive adventures known as ‘Pixel Pulps’, I’m confident and hopeful that developer LCB Game Studio can learn from their debut entry and make the changes necessary to turn what is a good experience into a truly great one. 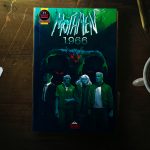 Mothmen 1966 Review
A Cryptid Conspiracy
Mothmen 1966 is a welcome first entry to the ‘Pixel Pulp’ series of interactive retro adventures, telling a quality story about the Leonid Meteor Shower of 1966 and the strange events that surrounded it. Unfortunately the gameplay fails to be anywhere near as interesting, but the package is not without its charm.
The Good
Engaging narrative
Cool retro visuals
Surprisingly strong sense of atmosphere
Solitaire mini-game
The Bad
Too short
Basic gameplay
Puzzles lack creativity
6.5
HAS A CRACK

Mothmen 1966 Review
A Cryptid Conspiracy
Mothmen 1966 is a welcome first entry to the ‘Pixel Pulp’ series of interactive retro adventures, telling a quality story about the Leonid Meteor Shower of 1966 and the strange events that surrounded it. Unfortunately the gameplay fails to be anywhere near as interesting, but the package is not without its charm.
The Good
Engaging narrative
Cool retro visuals
Surprisingly strong sense of atmosphere
Solitaire mini-game
The Bad
Too short
Basic gameplay
Puzzles lack creativity
6.5
HAS A CRACK
In this article:chorus worldwide, Dylan Blereau, indie, limbo, Mothman, Mothmen, pc, Pixel Pulp, ps4, spooky, switch, xbox